It is a boring, long 200 miles from Grand Canyon’s North Rim to its South Rim. But my destination is 350 miles north. I drive to Moab – a shower and a bed.

To appreciate Arizona, one needs to drive through the northeastern part of the state. I descend over 3000 feet below the rim of the Grand Canyon into an arid valley, driving past miles and miles of the Vermilion Cliffs National Monument, last seen as I stood at Imperial Point on the North Rim. These cliffs are home to the slowly growing population of California condors in this area. The cliffs appear endless as I drive for about 50 miles past both their western and southern side. As are all rock formations in this part of the country, these sandstone cliffs are awesome in color, shape, and size.

I drive south only to loop back to the north, meander east and turn north once again. My route is determined by buttes, rivers and washes. Mother Nature was the road surveyor here. My camping neighbors were avoiding the Marble Canyon route – I head right for it, driving under the shadows of the great Vermilion Cliffs. I’m seeing washouts and signs of powerful flash flooding, but no huge flying birds.

Passing through the town of Marble Canyon, I cross the Colorado River at Navajo Bridge where I take time to walk out on a pedestrian walk high above just a small part of the hundreds of miles of sculptured canyons carved by the Colorado River. Part of the Navajo Nation Reservation, Navajo ladies are selling blankets, jewelry and carvings nearby.

This is the southern end of Glen Canyon where it meets Marble Canyon, the Colorado flowing south to eventually pass thousands of feet below the North Rim’s Imperial Point.

I join Highway 89 to climb the steep mountain road out of the valley onto Echo Cliffs, capturing a final view of this valley, Vermilion Cliffs, and, in the distance, the magnificent North Rim of the Grand Canyon. I drive through an awesome pass cut through towering red canyon walls, so impressive I turn around and drive through the pass again from both directions. Eventually, I mount the plateau. Terrain abruptly changes, the desert flattens out, buttes hover in the distance, and few people or animals are seen. Page, Arizona lies but 22 miles north. 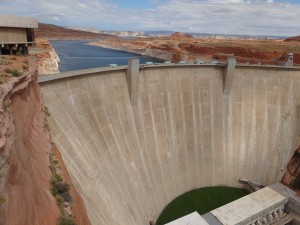 Page is known, and exists, for Lake Powell. Lake Powell exists because of the Glen Canyon Dam. Begun in 1956, opened in 1966, the dam remains controversial. Its existence changed the course and future of the Colorado River, and thus of Glen Canyon, Marble Canyon, Grand Canyon, and everything south of its 710 foot concrete wall. The dam is damn impressive, as is the beautiful lake it creates, and the entire Glen Canyon National Recreation Area. Temperatures are about 80, there is a wonderful breeze, and my imagination puts me on a houseboat luxuriating upon the beautiful blue waters of the lake.

I continued east through mainly flat Arizona territory spotted with high buttes, domed rocks, and skinny pencil rocks jutting into the sky. How many photos of impressive rock formations can one snap? The lack of traffic makes for a beautiful drive. Here, towns are very small and Navajo kiosks abound. 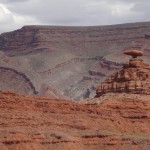 Following my GPS recommendation, I take Highway 163 north through Oljato Monument Valley toward Mexican Hat (a rock formation, not a town). I didn’t think the landscape could get better until I was surrounded by the impressive red rock formations of Monument Valley. Utah seems to have taken Arizona’s best and upped her one better. It’s a geologic dream where Earth’s upheavals, erosion, molten lava and water created a magnificent landscape of sculptured canyons, deep red sand, unique rock architecture, and carved gullies.

In the distance, storm clouds threaten. Evidence of past or potential future flash flooding is seen. Huge boulders have been pushed around the washes like pebbles by past waters. In fact, a CNN bulletin tells of flash flooding and loss of life in a little town I drove through just a few days ago. It’s always the potential here in the desert where rainstorms dump huge amounts of rain in minutes. Warning signs along the roads make me conscious that the dark clouds and occasional raindrops falling on my windshield could wreak havoc in minutes.

At Bluff, I make a final turn to the north onto Highway 191. The landscape becomes more dramatic with each mile. I approach the southeastern edges of Canyonlands National Park. Here again is the Colorado River at work and the reason I am arriving in Moab.

Utah has turned on Mother Nature’s beauty switch and tomorrow I will visit some of her best work.