♫ ON THE ROAD AGAIN ♬ 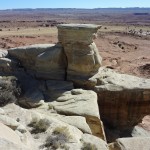 October 17, 2011 – Again I load my CRV and drive the highways of my nation. Destination: Chicago. Déjà vu from California’s Central Coast to beyond Las Vegas (which btw, I view as ugly and a city to quickly drive through). The buttes and mountains north of Vegas are beautiful. Driving Interstate 15 takes Tom Tom and me through the Moapa Valley, a corner of Arizona, and into Utah. First stop is St. George. The geology is interesting, gas is cheaper and the 75 mph a good idea. Not many people on the roads, particularly heading east. 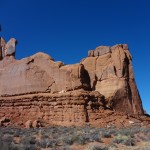 Today, turned west onto I 70 for some unique scenery and the fall colors of aspens, cottonwoods, maples, birch, oaks and firs. Temperatures low 50s, sunny, crisp air and blue skies. Eastern area of Moab and Canyonlands is awesome with its high bluffs and vistas. I make a detour to visit Arches National Park, known for over 2000 natural sandstone arches, including the easily recognized Delicate Arch, in addition to a bunch of unique geological formations. The red of the rocks against the brilliant blue sky makes some great photos. 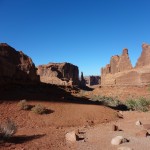 The national park lies atop an underground salt bed, which is the main cause of the formation of the arches, spires, balanced rocks, sandstone fins, and eroded monoliths in the area. Over 300 million years ago a sea flowed through; it evaporated over time creating this unique region. Millions of years and a sequence of water, wind, sediment deposits and erosion, uplift and faulting, left what I enjoy today.

As this movement shaped the landscape, erosion removed the younger rock layers from the surface. The major formations and arches are the salmon-colored Entrada Sandstone, and the buff-colored Navajo Sandstone. Over time, water seeped into the cracks; ice formed in fissures, expanded and broke off bits and pieces. Winds later cleaned out the loose particles. What remains are freestanding fins. Wind and water continued to erode these formations until the rock material gave way and chunks of rock tumbled out. Many fins collapsed. Others, with the right degree of hardness and balance, survived despite their missing sections. These became the gorgeous arches.

It is said there is an abundance of wildlife in Arches. Most I did not see, like the mountain lion, midget faded rattlesnake, bighorn sheep and yucca moth. I did spot scrub jay, sparrows and an eyeful of spectacular scenery. Good enough. I stay in Rifle, CO, at the foot of the Rockies where the temps are dropping and my shorts are retired. Also, my CRV objects to freezing her bumpers off. 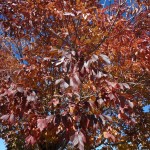 Fall colors in the Rockies

My drive on day three and four takes me over the Rocky Mountains, across the Continental Divide, through forests of golden aspens and bright yellow cottonwoods, past snow-topped peaks, along the Colorado River, over well-named waters like Turkey and Coon Creeks, and quickly through the scary spots like Republican City. Once east of Denver the land flattens into the great basin and the quiet and open highway seems to go on forever through Kansas and Nebraska farmland. Everyone waves. There is little traffic but lots of road kill: possum, raccoon, deer, and coyote. Farmers are bailing hay and shucking corn. I pass the 2572-mile sign marking the center point of true Midwest. The rural roads of NE permit 60 mph; however, Nebraskans drive 58. Overnight in Colby, KS and then on to my ancestral hometown of Rock Port MO.

Spring flooding becomes apparent around Auburn NE, about 10 miles from the MO border. The Missouri River has damaged bridges and I must detour north to Plattsmouth. I cross the river via an old toll bridge, 1.25$, and enter Iowa – flat, barren, standing water, the rich topsoil of this region under a layer of sludge and chemicals. It was a spring of nearly bluff-to-bluff flooding of this Missouri River Basin and a devastating time for its citizens. Like me, workers now have to drive a long detour to get to the other side of the river.

Flooding is common in the Rock Port area, which is why I am having difficulty finding my great great grandmother who lived here in the 1860-1870s. With the Missouri encroaching on their town of Sonora, many moved to higher ground in Watson, the cemetery was possibly flooded, and many records lost. I visit the war memorial (I will purchase an engraved brick for my great great grandfather who died in the Civil War), drive Sonora area where he and his family lived, and imagine what life was like for them. 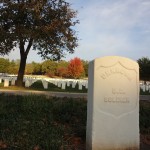 I drive to St. Joseph where I hope to discover what became of my great great grandfather when he died at Fort Smith. Unfortunately, he was one of the more than 5000 Union soldiers who died of measles before seeing action in the war. No luck at the library so I make a detour to the Midwest Genealogical Library in Independence, a wonderful resource. Another trip will be needed but I am collecting odd bits of info and people to contact.

On Friday I visit Fort Leavenworth National Cemetery. There is a possibility my ancestor was reinterred here in 1868. Regardless, it is a good experience visiting national cemeteries and this is no exception.

General Pershing, General of the Armies

It is a long drive past the fields of Missouri and Illinois, but I aim for my final destination of Munster, IN. I stop in Laclede MO to visit the boyhood home of John Joseph “Black Jack” Pershing. Pershing is the only person to be promoted in his own lifetime to the highest rank ever held in the United States Army – General of the Armies. There is an interesting museum and displays. I also serendipitously talk with a gentleman about genealogy and get critical tips and people to contact to further my research. 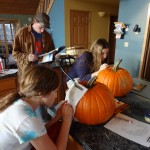 My next week is visiting living relatives – a sister in Munster and a nephew in Carlton MN. I mark an auspicious moment when I pay $3.12 a gallon for gas. In the cold climate of Carlton I leave my trusty CRV amid the chickens, ducks, rabbits and assorted wild animals of the Bremer farm. She will get much use here. I have driven her 8000 miles since August and she has served me well.

On Sunday the 30th, my sister and I board the Empire Builder in St. Paul. It is my first time on an American train. Destination: Portland OR. Our little Roomette is, shall I say, petite. Furnished with petite amenities like water, toiletries, coffee down the hall, and narrow bunks. We have our wine and snacks. Departing on time, we slowly roll through the countryside. 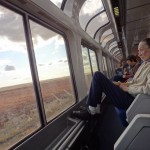 Aboard the Empire Builder

Riding Amtrak proves to be a nice experience. For a reasonable price, I have a place to stretch out at night, a cabin steward, comfortable lounge car, dining car with good meals included (community seating), water and coffee during the day, a cheese and wine tasting in the afternoon, and a slow and easy pace during which I can read or waste time on Angry Birds. Best of all is the 120-volt plugs to charge the electronics. Alas, no Wifi.

There is the occasional holdup on the tracks, usually for workmen. A large portion of track in ND was flooded this year and I can still see water standing along our route. There are ducks, geese, cows, horses, and miles of farms. In fact, all day of waving fields of grain and a few deer, but it is at night the train travels around the purple mountain majesty of Glacier National Park. So sad.

The second night aboard leaves the feeling of Silver Streak blasting out of the mountains toward Spokane, rocking and bouncing on my narrow bed. The angle of beds increases the feeling of a train out of control as the engineer races to make up time. We are in the last car and any second our engineering snake will whip its tail and send us flying off to God knows where.

Sunrise over the Columbia River. The Gorge is spectacular with its cliffs; wide meandering river; locks; and fall colors of yellow, gold, bronze, and red.

Simple transfer at Portland’s Union Station. Lounge is well equipped with drinks, Wifi, and special service. Short wait and we board the Coast Starlight. This train has a scenic director, movies, and Wifi (though slooow and sporadic). Destination: San Luis Obispo CA.

In our petite Roomette, we are served champagne, place our dinner reservation, and watch the beautifully leafed trees pass by as we head for home. I am getting used to this service and to RR TIME – scheduled departure is 5:10 but when ready train leaves and you better be here when we do. That’s okay because it is the smokers we leave behind. Announcements: bad language, drunkenness, and smoking results in removal from the train. Tough love railroad style.

Dinner is good. Available are pasta, fish, chicken, or steak, all well prepared. I had ribs and the chocolate cream puff tonight. We figure our meal costs about $60 – all included in the price of our sleeper. For our two seats and the sleepers on the Empire Builder and Coast Starlight, the cost was $1059. Reasonable when considering three meals a day, sleepers, lounges, movies, wine tasting, and champagne. Oh, and Mr. Toad’s Wild Ride thru the mountains of Glacier was also included.

Passed through the mountains and forests in the dark so once again missed the best scenery. Awake in Sacramento to brilliant sunrise. We travel along the bays and through industrial areas until beyond San Jose. The train moves thru Steinbeck’s Salinas Valley to Paso Robles where we turn toward the coast thru the Santa Lucias to San Luis Obispo. Our slow “garden” route has taken over 9 hours.

My first American train adventure ends. I am pleased and open to the possibility of more. 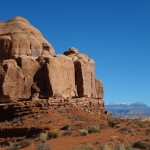 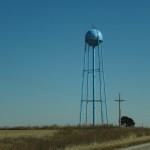 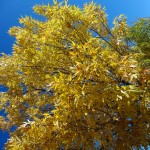 Fall colors in the Rockies