DATES: Loyd M. Bunyard was born ca. 1832 in Washington County, Missouri. Loyd is the son of Samuel B. Bunyard and living at home in 1850. According to that census, he is attending school. Because he would have been at least 17 years old at the time, it can be assumed that Loyd was literate and, compared to the times, well educated. Loyd died of the measles on 15 April 1862 in St. Joseph, MO. It is unknown where he is buried. His wife Joanna could have had the body shipped back to Rock Port or to his family farm and cemetery in Cherry Valley. However, it seems reasonable to assume that during the confusion and violence of the time, he was buried along with the other Union soldiers in St. Joseph. There is also a possibility that he was one of the many soldiers who were buried at the newly established National Cemetery at Fort Leavenworth where in the years following the Civil War, the bodies of Union soldiers from St. Joseph, Kansas City and Independence, Mo., were re-interred.

MARRIAGE: Loyd married Joanna Jane Fitzwater on 2 March 1854 in Rolla, Phelps County, Missouri and they have 3 children. Joanna was born ca. 1834 in Missouri. She was the daughter of Moses Fitzwater and Sarah Williams. In 1850, Fitzwaters were living in Johnson Twp. Washington County, Missouri,  just a few miles north of Samuel Bunyard and his family. The Bunyard and Fitzwater families are already connected by marriage as Joanna’s Uncle George married Loyd’s sister Celia in 1846.  After the death of Loyd, Joanna Bunyard may have remarried on 21 August 1962 to A. J. (Andrew Jackson) Abbott in Crawford Co. MO. It is thought that A.J. is the younger  brother of Aaron Peter Abbott who married Loyd’s sister Elizabeth in Crawford Co. on 7 July 1860.

It is unknown where Joanna was living after her marriage to Andrew. Andrew and his older brother Aaron enrolled as privates into Co. F of the 32nd Regiment of Missouri Volunteers on 13 August 1862 in Steelville. [The same regiment into which John Bunyard and brother-in-law George Kenworthy mustered.] Jackson was mustered into the army 18 Oct 1862 in Rolla. Unfortunately, it is thought that Andrew died of disease on the River Steamer Memphis on 3 Feb 1863 thus leaving Joanna a widow for the second time.

There is no record that Joanna applied for a Widow’s Pension for Loyd or for Andrew. It is not known if she had any children by Andrew. 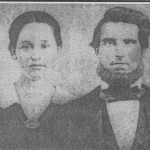 According to the 1870 census, Joanna has returned to Atchison County, Missouri  (where she lived with Loyd) and may remarry sometime between 1863 and 1866.

Joanna appears in the 1870 Federal Census, living in Nishnabotna Twp. in Atchison Co. Her Post Office is Rock Port. Her marital status is unclear. In the census, she is using the name of Bunyard, as is her son William. There also are additional children in the home, all under the name of Bunyard: Florence born ca. 1866 in Wisconsin, and twins Sherman and Sheridan born Sept. 1869 in MO. The census states she “keeps house” and owns $200 in property. There is no mention of a husband or her marital status in the census. Has she remarried? Loyd and Joanne’s daughter, Mary, is living as a domestic in Rock Port. There is no mention of her daughter Elizabeth, who would have been 15 years old.

What happened to Joanna Jane Fitzwater Bunyard after 1862?

HISTORY: Times were hard for all homesteaders during Loyd’s time. Missouri was divided on the issue of war. Farming, in the best of times, was difficult. Court records show that Loyd was no exception. Sworn in 25 Oct 1860 is a suit filed by John Hall [Loyd’s neighbor in 1860] against ‘Loyd’ Bunyard for return of a “sorell or chestnut horse” and $25 damages. The Plaintiff attested that he loaned Loyd a yoke of oxen 21 Oct 1859, which the defendant, with Hall’s consent, traded for a 5 year-old sorell/chestnut horse in Feb of 1860. However, the defendant did not return the horse nor pay the sum of $60 by 1 Oct 1860 as agreed. Plaintiff was concerned the horse, valued at $100, would be lost or injured if left with the defendant. As a result of the filing, the Court Clerk ordered Loyd to deliver the horse to John Hall and if he did not, the Sheriff was to take possession of the horse and summon Loyd M. Bunyard to appear before the Atchison County Circuit Court town of Rock Port on the fourth Monday in April 1861. What happened to the horse? This is not noted in the court records. Was this the same horse that is listed on Loyd’s 1862 enlistment papers and valued at $75?

A second suit filed Feb 1862 in Circuit Court was brought against ‘Loyd’ Bunyard on 16 Oct 1860 by R. H. Edmonson who attested that a note for $58.72 dated 1 Jan 1860, bearing 10% interest, due one day after date, was unpaid by the defendant. A summons was issued for payment 17 Nov 1860, but the “Defendant being duly called came not, but made default” and the Justice of the Peace John Shandy of Nishnabotna Township ordered defendant to pay “sixty-three dollars and eighty-five cents for their debt and five dollars and thirteen cents for their damages and one dollar and sixty cents for their costs….”

Note that all legal documents of the time, the two civil suits in the Atchison County Circuit Court, and his Military Enlistment Papers, all spell his name “Loyd”. It is only as documents have been transcribed that the spelling sometimes shows up as “Lloyd.” 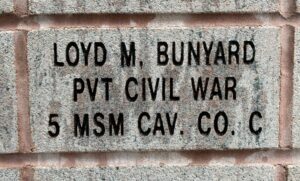 However, Loyd never had the opportunity to fight for his convictions. Camps populated by young soldiers who had never before been exposed to a large variety of common contagious diseases were plagued by outbreaks of measles, chickenpox, mumps, and whooping cough. When volunteers mustered for service, communicable diseases immediately struck down vast numbers of them. The first of the epidemics to sweep through the ranks was usually measles. In one Confederate camp of 10,000 men, 4,000 soldiers were stricken with measles, and the savage onset of the disease was something that astonished everyone, even the surgeons. The disease was so common and disruptive that new units were held back from active service until they had been “put through the measles.” Because men from urban areas were more likely to have been exposed to the disease at an early age, measles caused the most serious problem in units raised from rural areas.

An epidemic of measles usually ran its course in three or four weeks, and while a person living under normal circumstances would usually recover with no lasting effects, in army camps the childhood disease often proved to be fatal. Sadly, 5,177 soldiers in the Union Army died of measles during the war. Loyd Bunyard was one of those soldiers. It is reported that Loyd Bunyard died 13 April 1862 of measles and congestion in St. Joseph, MO.  It would appear Loyd never left the barracks, for within 23 days of reporting he was dead. He had not survived being “put through the measles.”

He was 30 years old and left a 4 year-old son, William Washington Bunyard.