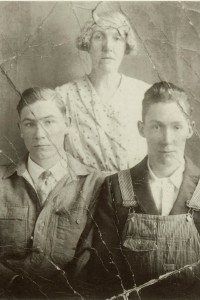 DATES: William Carl Bunyard was born 9 July 1913 in Des Moines, Polk County, Iowa. He is the son of Dora Hannah Louise Johanna Brockmann. Although his birth certificate names Edward Durwood Bunyard as his father this is not the case. It was not until 1942 that William petitioned the State of Iowa to correct his name on his birth certificate from Edward to William Carl. On this application William states his place of birth was 602 SE 5th Street in Des Moines. He died 3 July 1986 in Schererville, Lake County, Indiana and is buried at the Westville Cemetery, Westville, La Porte County, Indiana.

MARRIAGE:  – William Carl Bunyard and Vera May Shinabarger were married on 4 February 1939 at the Grace Lutheran Parsonage in Elkhart Indiana. Rev. J. Daniel Brosy officiated. The church, on W. Marion St., was a 5-minute drive from Vera’s home. Vera May Shinabarger was born 26 April 1917 to Riley Shinabarger and Flora Schlundt in Elkhart, Elkhart County, Indiana. Vera graduated from Elkhart High School in 1936 before attending the American Technical Society, a vocational training school in Chicago, in 1936-1937. 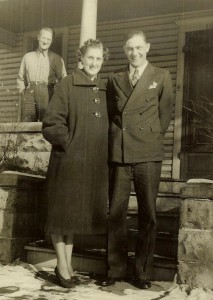 By September of 1938, Bill met Vera Shinabarger in East Chicago, Indiana. Living in East Chicago was Vera’s great-uncle William Schlundt and his daughter Ettabelle who was one of Vera’s best friends. Ettabelle probably was the reason Vera initially traveled to East Chicago. Her father Riley was an engineer for the New York Central RR and her passage between Chicago, East Chicago, and her home in Elkhart, some 80 miles east, would have been direct and inexpensive.

Vera Bunyard died 9 January 1993 in Lake County, Indiana and is buried at the Westville Cemetery, La Porte Co. IN.

HISTORY: Did William know his grandparents, Angeline and William Bunyard? Certainly he knew his Grandmother Angeline as she and Bill’s cousins lived nearby in Colfax most of his young life. As for his Grandfather William who was separated from his grandmother around the time of William’s birth, it is not certain, but he lived close enough that it is likely William knew him. Or was Edward estranged from his father after his parent’s separation? Most all his uncles and aunts were in the Des Moines/Colfax area so it is certain that William visited them. On 14 November 1935, he was with his relatives in Colfax, perhaps his Grandmother Bunyard, where he applied for a Resident Trapping License. He continued contact with his cousins throughout his life.

Certainly the larger question is: DID WILLIAM KNOW HIS BIOLOGICAL FATHER?

The research and DNA testing resulting in the conclusions about the father of William Bunyard can be found on the pages of DNA RESEARCH and specifically Richard E. Bunyard – DNA Results and the National Geographic report for Richard E. Bunyard.

I feel as certain as I can that my paternal grandfather was a LONCAR. My grandfather could be either of two siblings – both are good candidates. At the present time, I lean toward John Loncar who was in Des Moines the same time as my grandmother in 1912-1913; he actually lived in the same house listed on my father’s 1913 birth certificate.

The 1930 Federal Census places Edward and his family in Stuart City, Guthrie County, Iowa. Edward is supporting his family as a common laborer working on farms in the community. The Census states both Edward and William, now 17, are odd job laborers.  William is surrounded by farming country. The Raccoon River flows through the area and there were plenty of open spaces for young boys to hunt and fish in their spare time. Once William left school, he worked at odd jobs and as a general handyman, learning by doing. It is during the mid-1930s that William met Stanley Forcht, a young man who was to become his life-long friend. Stanley was born in Guthrie Co. on 2 Oct 1913 to parents Millard and Flora Forcht. 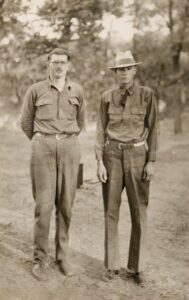 On 19 May 1933, William enrolled into the Civilian Conservation Corps at Fort Des Moines, “that magnificent Army of Youth and Peace that put into action the Awakening of the People to the facts of Conservation and Recreation.” He reported for duty at Springbrook Camp SP-7. He was 20 years old and described as a laborer with blue eyes, light brown hair, ruddy complexion and 5’11” in height. During his tenure with the CCC, Bill worked in ‘soil erosion’ under the War Department at Creston, 50 miles southwest of Des Moines. On 11 November he transferred to Guthrie Center doing ‘park work’ until his discharge at Guthrie Center on 30 June 1934. Remarks included with his discharge describe Bill as having no vocational training, schooling to grade 8, and an excellent character.

On 8 November, Bill enrolled for courses at The Northwestern School of Taxidermy. It is unknown if he finished these courses but Bill would use whatever skills he acquired later in life as he pursued a career as a mink rancher.

Bill remained in Iowa until early in 1937. He was living in Coon Rapids about 20 miles north of Guthrie Center on the Middle Raccoon River and received an Iowa Operator’s License 1935-1937. Also, on 16 February 1937, Bill applied for and received his Social Security Card that notes on the back that he was “Unemployed, Coon Rapids IA.” It is possible that Bill and Stanley Forcht met while enlisted in the CCC. It is thought they ‘hit the road’ together and drifted about for a few years in the mid-1930s. By April, Bill had moved to East Chicago Indiana. It is not known why he chose to move to East Chicago, but Stanley may have proceeded or gone with him. There were many steel and manufacturing mills in the area and a large draw for labor. Bill received an Indiana Operator’s License in 1937. He worked for International Smelting & Refining Co in East Chicago, earning 66 cents an hour.

After his marriage to Vera Shinabarger in 1939, Bill and Vera moved to Indiana Harbor into an apartment across the street from Vera’s Uncle William Schlundt, her mother’s brother. Indiana Harbor and its busy port and huge complex of Inland Steel and other heavy industrial plants was far removed from the rural environment of Iowa where Bill was raised. It is no surprise that he sought to purchase a home in a more rural area. On the 26 June 1941 Bill and Vera bought a small 2-bedroom log home in the area of Lake Hills south of the unincorporated town of Schererville, Lake County Indiana. In 1950, they purchased the surrounding land. It was on these ten acres that Bill raised his family and established the Lake Hills Fur Farm. 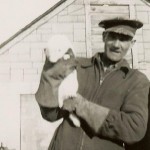 With his combined knowledge of all-around handyman, taxidermy, animals, farming, and what he learned while in the CCC, Bill began raising mink as early as 1946. During the 1950s between 700 and 1200 mink were raised on the fur farm, as were cattle, horses, hogs, chickens, turkeys, rabbits, sheep, goats, ducks, an occasional chinchilla, nutria, weasel, fox, and unwanted skunk. Fields were planted with the occasional crops or garden, and pine trees were grown. There his son also had the opportunity to fish, hunt and trap in the nearby woods much as William did as a young man along the banks of the Raccoon River. 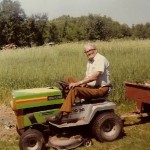 William the gentleman farmer in Schererville 1983

In 1953, Bill was hired as a Maintenance man at Keyes Fibre Co. in Hammond where he continued to work until his retirement in 1982.  He then devoted his time to “puttering” around his basement, garage and garden taking great pride in digging out tons of dirt by pick and shovel; painting, refurbishing and improving the buildings; and growing tomatoes, peppers, and huge pumpkins in his garden.