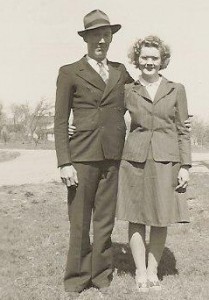 HISTORY:  Russell Edward Bunyard was born at a “Residence” in Des Moines. At the time of his birth, his parents, Edward and Dora, were listed in the Des Moines Directory as residing at 602 SE 5th Street. This is the same residence where his mother Dora was living in July of 1913 and which she listed on the birth certificate of her first son William Carl. The owner and landlady of the residence, Clara Johnson, rented out a room to boarders. I believe Clara Johnson also acted as a midwife and assisted in the birth of both Russell and William.

Russell lived with his parents in the Panora area until at least 1939. He entered the U.S. Army in 1942 and served overseas until the end of WWII. Upon his discharge, Russell returned to Iowa and married Shirley Miller. Rusty and Shirley Bunyard remained in Iowa all their lives. Russell worked in area construction until his retirement.

My mother was Ethel V Miller, Shirley”s sister. She passed away in 2007. I have a little more information on Floyd Miller’s, my grandfather’s, family and of course lots more on our side.

Give me a little information on yourself and I can check. Like birthday and names of father and grandfather. I enjoy placing other Bunyards within the family.

just checking to see if we are distantly related