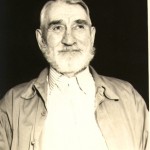 DATES: Edward Durwood Bunyard was born in New Sharon, Mahaska County, Iowa on 2 April 1882. He was the oldest son of William Washington Bunyard and Angeline Arrelia Barnard. Angeline was the daughter of William T. Barnard and Eveline McMahan. Edward’s parents were living in the small community of Hepburn in Page County at the time. However, he may actually have been born at the home of his Grandmother Emeline, Angeline’s mother. Angeline was 16 years old at the time of his birth. Edward lives in Iowa his entire life. He died 10 April 1952 in Panora, Guthrie County, Iowa and is buried in an unmarked grave in West Cemetery in Panora. 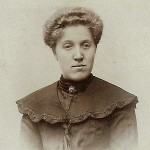 MARRIAGE: Edward Bunyard married Dorothea Hannah Louise Johanna Brockmann on 11 October 1913 in Des Moines, Polk County, Iowa. Dora Brockmann was born on 20 July 1879 in Celle, Hannover, Germany. Her home in Celle is about 27 miles northeast of Hannover in the German state of Lower Saxony. Dora was the daughter of Georg August Wilhelm Brockmann and Johanna Elizabeth Speckhan. Both her parents were born in Celle. Dora emigrated to the United States as a Third Class passenger on the President Lincoln. She departed on 2 Dec 1911 from Hamburg and traveled with stops in Cuxhaven, Boulogne, Southampton and into New York’s Ellis Island. She paid her own passage and was in possession of $25 when she departed. She registered on ship as a 32 year-old single woman and a cook by profession. Her nationality was given as Prussian. She listed her nearest relative as her father, Wilhelm Brockmann in Celle. Dora stated that her final destination was Des Moines Iowa where she was to be met by her aunt, Dora Heindorf. Dora Brockmann Bunyard died 19 November 1968 in Blue Grass,Scott County, Iowa and is buried at the Rose Hill Cemetery, Buffalo, Scott County, Iowa.

For a deeper study of Dora Brockmann and her German ancestry, refer to the summary titled Dorothea Hannah Louise Johanna “Dora” Brockmann 1879 – 1968 found on the pages of FAMILY CHRONICLES.

HISTORY: At the time of the Iowa State Census in 1915 Edward and Dora are living in the area of Bondurant in Polk County, Iowa. Dora’s census card reflects she is not yet a citizen of the U.S. Edward is a laborer by occupation. His total earnings for 1914 are $400. He also states the extent of his education to be 8 years Common School. He is not in farming and has no church affiliation. The town of Bondurant is just north of Des Moines and 2 miles east of Ankeny where his parents were living in 1905. It is also just a few miles west of Farrar where his mother and younger siblings Chester and Elmer were living in 1915. This is the Census that states Angeline as a ‘widow’  while her husband William seems to be living in Des Moines. By 1917 Edward has moved to Des Moines and is residing a few blocks away from his father, William Washington Bunyard.

The Iowa State Census of 1925 finds Edward, Dora and sons William and Russell in Van Meter, Dallas County, Iowa, a small community west of Des Moines. Like his father before him, Edward appears to move often, possibly following the work which is available. Edward is renting his home for $8 a month. Dora, who became a naturalized citizen in 1915 and has lived in the U.S. and in Iowa for 15 years, says she has a Grade School education amounting to 8 years and can read and write. Her son William has had 4 years of Grade School and son Russell has had one. One other interesting bit of information that is given is the names of Dora’s parents. She has told the census taker that her father is William Brockmann of Germany and her mother is Johana of Germany and that they were married in that country.

Edward and Dora with grandson Richard 1942

By 1930 Edward and his family have moved to Stuart City, Guthrie County, Iowa. Edward is supporting his family as a common laborer working on farms in the community. He moved into the small town of Panora in 1940. Son William has left the home by early 1937. His brother Russell remained with his parents until at least 1939.

In 1952, at the age of 58, Edward died in Panora. He is buried in the West Cass Township Cemetery in Panora and his grave site is unmarked and there is no record found for the location of his grave.