DATES: Ernest Franklin “Frank” Shinabarger was born 7 September 1860 in Porter County, Indiana. He was the son of Simon Peter Shinabarger. He died as a result of a lumber mill accident on the 11 December 1916 in Everett, Snohomish County, Washington. Frank is buried at Evergreen Cemetery in Everett.

MARRIAGES: Frank married Delilah May Carter on 31 October 1885 in Porter Co. IN. The marriage ended in divorce.

Delilah was the daughter of Philo and Elizabeth SPEARS Carter. “May” was born 16 May 1869 in Porter County and died in Elkhart, Elkhart County, Indiana on 16 May 1957. After moving to Washington, Frank married Georgiana MIX on 11 December 1888 in Chehalis County, Washington Territory. Georgia was born 21 Nov 1873 in WA and died 13 January 1948 at the home of her daughter, Millicent, in Chico, CA. She was cremated and buried alongside Frank at Evergreen Cemetery in Everett, WA.

HISTORY: Frank moved west sometime after his divorce from Delilah. His son did not meet him until after he turned 21 years of age. The two families came to know one another and visited and corresponded for the rest of their lives. Little is known of the origins of Georgiana Mix except she was a mix of Indigenous American. Although Georgiana can be located living with a sister in 1881, neither of her parents have been confirmed.

CHILDREN of Ernest Franklin and Delilah May Carter Shinabarger: 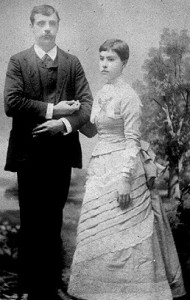 Good to hear from my cousins. My mother was a life long correspondent with Millicent and most of my early information is via her letters. She was quite a character, from the letters. Will send you a more personal email but really good to hear from you. I have more information on the Reunion links. Anything you see as an error, please let me know. I have done DNA on Shinabarger but as yet not finding any connections with the early Shinabarger immigrant.

Learned a little more about my great grandparents today when I read this. My grandmother was Georgia Anne. Thanks!