DATES:  James Beal Bunyard was baptized 5 December 1744 in St. Botolph Bishopsgate, London, England. His parents are thought to have been James Bunyard and Jane Burchfield who married 23 October 1743 at All Saints Church in Maidstone, Kent County, England. The community of Maidstone is about 22 miles southeast of London. However, researchers of the Maidstone Bunyards, specifically James and Jane Burchfield Bunyard, would seem to have disproven this connection. According to Simon Kidner:

I know of no evidence that the James Bunyard who married Jane Burchfield at All Saints Maidstone on 23 October 1743 was related (other than sharing the surname) to the Bunyards of Bishopsgate, least of all to the petty thief transported to the colonies in 1764. The proceedings of the Old Bailey recount that James Bunyard had been brought up from the age of 6-7 months by one John Smith.”  This note from researcher Simon Kidner in 2004, whose mother, Patricia Bunyard of the Maidstone Bunyards, is related to Harry Bunyard who worked in Bakersfield, California in 1893.

Who was the James Bunyard who baptized his son James and his daughter Jane at St. Botolph Bishopsgate in London? The church records for St. Botolph name Bunyard’s as far back as 1678.

The first probable Bunyard record appears in 1678 when John James Bunyard and Elizabeth Brannock  baptize a son, James, at St. Olave Old Jewry, London England. This James married Sarah Mathis in 1713 and they baptized their son James in 1717, and daughters Sarah and Elizabeth at St. Botolph, Bishopsgate. This 3rd generation is thought to be James and his wife Jane Burchfield who baptized their son James at St. Botolph in 1744,  and their daughter Jane in 1748. It is thought that this child is James Beal Bunyard. However, there is no definitive proof this James born 1744 is one and the same as James Beal Bunyard. There has been no connection to the Maidstone Bunyard’s.

John Smith testified at James’ trial at Old Bailey Courts 14 September 1763 that “he had brought him (James) up from six or seven months old till he was fit to go apprentice; that he was then an apprentice to Francis Stedman, in Clerkenwell; and that he never heard any ill of him in his life.” James was found guilty of a felony and sentenced to seven years servitude in the colonies of the west and was transported on the ship Tryal in March 1764.

James Beal died sometime after 14 August 1817, the date of his Will. Often the writing of a Will and date of death were close in time so I am assuming James Beal Bunyard left this earth sometime in the fall of 1817 at the age of 73.

MARRIAGE:  James would have completed his servitude in seven years and, with good behavior, been a free man by approximately June of 1771. He first reappears in July 1774 in Surry County, North Carolina, where he may have met his future wife, Hannah. James and Hannah were married on 16 March 1774. It is thought Hannah was a Larken. (Studying the naming of their children could support this.) It is uncertain when Hannah was born. Taking into account the inaccuracies that occur in records, the 1800 Census would have her under 45. Given her first child was born in 1775, her last 1796, I am supposing Hannah was born about 1755, making her 10 years younger than James.

HISTORY: Most ships like the Tryal sailed into Baltimore, Maryland or Hampton Roads on the James River in Virginia. It is unknown what happened to James during his seven years of servitude but his fate was probably to land in Virginia and work on a plantation. What is known is he resurfaces in July 1774 with Hannah in Surry County, NC. Throughout his life James lives within 30 miles of North Wilkesboro, even though he appears to move because of the shifting and merging of counties as populations grow. James began in Surry Co. but in 1777 his homestead section was annexed as a part of Wilkes Co. 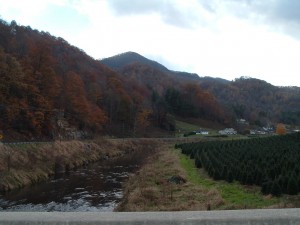 We last see our ancestor, James Beal Bunyard, executing his Last Will and Testament on 14 August 1817 in Ashe County, North Carolina. He is the 73 year-old husband of Hannah, his wife of about 45 years, and the father of 6 sons and 2 daughters. He is a successful farmer with several hundred acres of land, a respected community leader, an appointed Constable of his region, and honored church member. It is unknown if James is in ill health on this date, but “calling to mind the mortality of my body and knowing that it is appointed for all men once to die” it seems James is preparing to depart this earth.

In his lifetime, James has accumulated a considerable amount of land, perhaps as much as 1200 of the 9,533 acres attributed to his Ashe Co. District in 1800. But he has also assisted his sons’ farming ambitions. He gave 150 acres to son John in 1808. And in his Will, he bequeaths his remaining plantation and possessions to his wife and daughters, Nancy and Betsy. To Samuel, his youngest son who is age 23, he gives 150 acres so “when he marrys for home to have a bed equal to the rest of the boys.”  James will also ” give and bequeath unto my wife the negro woman Amony during her widowhood & if she should marry again then for Nancy to have Amony” thus establishing he also owns at least one slave. Leaving Larkin as executor, James departs this world with the assurance that his wife and family are secure.

James’ life has been quite an achievement for a poor, unskilled boy born in the East End of London in 1744. Beginning his colonial life as a felon and one of “His Majesty’s Seven-Year Passengers” in 1764, he worked hard and learned his craft as a farmer. He tilled the soil and raised crops of corn, grain, fruits and vegetables. The livestock was mostly hogs and cattle with a few scrub sheep on the rocky hills. All the while, James held positions in community and state government, and acted as delegate for his church. The ethics of hard work, Christian faith, and love of family passed father to son. However, this man who arrived on these shores in servitude ended his life by perpetuating the servitude of another. 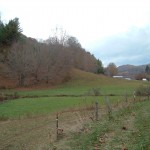 Near North Fork of New River 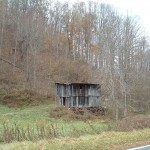 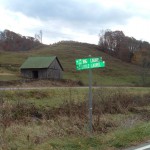 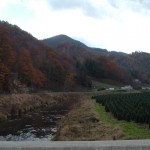