DATES: William Washington Bunyard was born March 1858 probably in Atchinson County, Missouri and was the son of Loyd M. Bunyard . He worked as an unskilled laborer, living and working in rural Iowa for most of his life. William died in Des Moines 7 June 1920 and was interred at Pine Hill Cemetery in Des Moines, Polk County. 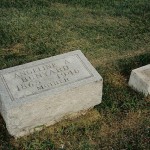 MARRIAGES: William married Angeline Arrelia Barnard 4 April 1881 in Nodaway County, Missouri. He was 23 years old and Angeline was 15. Angeline was born 29 April 1865 near Oskaloosa in Mahaska County, Iowa. She was the daughter of William T. Barnard and Emeline McMahan. Angeline died 29 March 1946 in Colfax, Jasper County, Iowa and is buried in Colfax Cemetery. There is an unmarked grave next to Angeline and records indicate this would be her son, Chester. Connections with the Barnards remain throughout the lives of William, Angeline and their children. In all their moves – to Hepburn in Page County; Harvey, Fifield, and Knoxville in Marion County; Des Moines; and to Peoria – Mahaska County seems to draw the Bunyards and Barnards. However, oddly, at one time William  lived about 50 miles from Joanna’s home in Rock Port, yet he looses contact with his mother and siblings.

The 1915 Iowa State Census shows Angeline as a widow, age 52, in Clear Creek Twp., Jasper Co. IA. In her home are sons Chester and Elmer. Elmer is 7 years old. What is the story of William?

HISTORY: How well did William Washington Bunyard know his ancestors? Did he know them well enough to learn of their pioneering spirit, their military exploits, and their achievements? Did William hear stories about his aunts and uncles and how they migrated across America? By this fourth generation, the Bunyard family is spread coast to coast. Sadly, with the death of his father in 1862 when William was four years old, it is possible that he knew little of his family’s history.

William lives in his mother’s Atchinson County home in 1870. Shortly after, he departs, not to the south nearer his uncles, but north into a new state, possibly never to return. As an adult, William probably does not remember his father and as we shall see, his story becomes an example of the fragmentation of the American family.

According to Civil War Pension Application No. 366,096 filed in 1887, claiming compensation as a surviving minor of Loyd Bunyard, William did “not know where the two sisters are who are intitled to [share] my father estate and neither do I know where my mother is….” He does not mention Florence nor the twins but he insinuates through his fruitless searches of  “the record of marriages from 1863 to 1867” that he thought his mother had remarried. However, the fact that neither William nor the Pension Office ever turned up any information may indicate there was no contact by William with any other Bunyard relatives.

The stumbling block for William’s petition is the Bureau wants proof the widow of the soldier has died, remarried or divorced. William states from Fifield in Marion Co. on 21 Feb 1892:

I am the son of Lloyd Bunyard. I do not know where the two sisters are who are intitled to — my father estate and neither do I know where my mother is and it is impossible for me to assertain the desired facts and after much effort I am compelled to request that a special examine be furnished in this case is the wish of this affidavit.

In Dec 1893, the Bureau of Pensions informs William the pension was “Submitted for rejection on the grounds of claimants declared inability to furnish any evidence to show the death of the widow of soldier.” Correspondence concerning his filing for a Civil War Pension continues though 1896. William never received a pension  nor is there evidence that other claims had been made by the widow or other children. Why didn’t Joanna apply for a pension for her minor children?

William, Angeline and their children move several times in their 30+ years of marriage. Census records indicate the family never owns their own home.  By 1912. records for Angeline and her children can be traced, but William has disappeared. In the 1920 Federal Census, Angeline is residing in Colfax in Jasper County, owns her own home and lives there with her sons, Chester age 30 and 12 year-old Elmer. Angeline has been alone since about 1912 and has presented herself as a widow since 1915.

Deeper digging reveals a different story. Indications are Angeline and William separated by 1912. Listed in the 1917 Des Moines City Directory is William W. Bunyard, a teamster residing in the same area as his oldest son Edward. It is unknown if Wm is living alone. The 1920 Federal Census locates William living in Des Moines City on 12 January.  William Bunyard is listed as 54 years of age and born in MO ca 1866. He is sharing his rented home with Ella, his “wife.” Ella is age 47 and was born in Wisconsin.  William is a dishwasher in a restaurant while Ella is a waitress. Are William and Ella married? There is no record of William’s divorce or of a second marriage. Who is Ella? Sadly, William had separated from his wife after 31 years of marriage and left her with a 5 year-old son and two teenage daughters. His adult children could not have been please with their father.

Sometime after this January Federal Census, William moved into the Polk County Poor Farm just north of Des Moines City. Ella disappears. William died at the Poor Farm on 7 June 1920 at the age of 62. Unclaimed deceased residents of the Poor Farm were buried in a nearby small cemetery located along NE 14th Street. Most graves were moved 11 Aug 1971 to nearby Pine Hill Cemetery when Route NE 14th was widened. Some of the 70 bodies were unidentified. William Bunyard may have been one of those unidentified bodies. The Poor Farm stated that “Liability for support of relatives extends to parents, grandparents, children, and grandchildren.” However, this did not appear to be the case with William as his family did not claim his body and he was buried in an anonymous pauper’s grave. 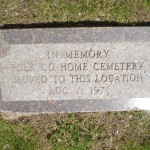 In a letter written to Vera Bunyard in 1991, Elsie Faye Plumb of Des Moines, a grand daughter of Angeline, wrote: “Our Grandpa Bunyard, William, is buried here in Des Moines. Aunt Blanche knew, but can’t remember her ever taking [us] to his grave.” William, unclaimed by the family, was buried on the 12th of June at the Poor Farm. His Death Certificate estimates his age to be 65 and indicates he is married but as to other vital information (names of wife, parents, date of birth) there is the response of “Don’t Know.”  It is understandable the daughters may not have had unkind feelings toward him in his final years. This could explain no family member claiming William’s body and grandchildren unable to “remember her ever taking [us] to his grave.” 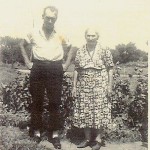 No. To my knowledge, and my father and I visited Mary and Chet at one time, Mary was only married once, to Chet for 45 years.