It is unconfirmed as to the origins of the first generation of Shinabargers on American soil. It is evident our ancestors immigrated from Germany well before the 1760s. DNA Y and autosomal testing has confirmed a strong connection to the John Shinaberry ca 1735-1807 and Mary Lyndon family who relocated to Mount Vernon, Knox County, Ohio about the same time as Michael Shinaberry and John Shinabarger. DNA testing has matched many Shinaberry descendants with roots in Augusta, Rockingham, Pocahontas, Pendleton and Highland counties in Virginia/West Virginia. With the changing county boundaries and the carving of portions of western Virginia to form the new state of West Virginia in 1863, these counties are in the same general area.

It is almost certain that among the early families who settled this region lies the answer to our major questions: who was the father of John Shinabarger 1764 and who was the mother of John’s eight children? Surnames which DNA testing has disclosed include Barnes, Life, Trimble, and Peck. There is a very strong indication that John Shinabarger’s roots lie in this same area and among these settlers. If so, then the possible patriarchs of the “Dozen S” families may be Johann Jacob Schoenberger and Anna Margareta Roller.

The summaries below are brief. They follow my Shinabarger line and do not discuss the research and DNA findings.

The Shinabarger Family History is no longer being published. You may access and download copies of the final 2018 edition here SHINABARGER FAMILY HISTORY BOOK – 2018 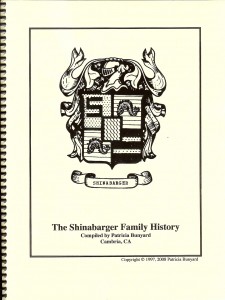 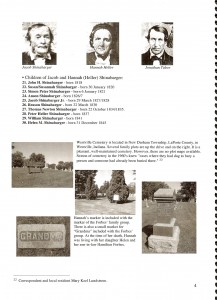 It is wonderful to hear from you. I do have quite a bit here that my grandfather, Riley, collected. He lived with Ernest for a time in Grays Harbor and I have some photos from there. I will look in my records. Hope we can exchange some information.

I was surfing the internet and found a question I had asked in 2012 which I never followed up on. My apologies. Do you have history on the Schlundt Bodien family? I would be interested to see if our family is one of the same.

Does anyone know or is the same family as “Schlundt Bodien”?

Riley Shinabarger and Flora Schlundt were witnesses at William Schlundt and Clara Etta Murten’s wedding. William and Clara Schlundt were Etta Schlundt’s parents. Etta is my great- aunt. Lena Schlundt was Etta’s sister and my grandmother.
Have you compiled the Schlundt family history. If you like, I have some info.