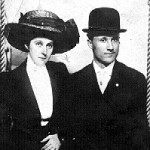 DATES:  Riley Ernest Shinabarger was born 7 September 1886 in Porter County, Indiana.  He was raised by grandparents Philo and Elizabeth CARTER. 1900 Federal Census lists Riley as adopted son of Philo Carter and went by the name Carter. Riley did not know about his father, Ernest Franklin Shinabarger, until he turned aged 21. Riley died 4 June 1966 in Elkhart, Elkhart County, Indiana and is buried in Westville Cemetery, Westville, La Porte County, Indiana.

MARRIAGE: Riley married Flora Schlundt on 15 December 1910  at the Immanuel Lutheran Church in Valparaiso, Porter County, Indiana. Flora was born 7 January 1888 in Porter Co. IN. Her mother was Mary Schlundt. She was raised by her grandparents John Schlundt and Fredericka Pöhl. Flora died 22 March 1960 in Elkhart, IN and is buried Westville Cemetery, Westville, Indiana.

HISTORY: Riley was an engineer with the New York Central RR. The family story is he was in Washington visiting his father and half-siblings when he proposed to Flora with the understanding they would marry as a Shinabarger.

FOR THOSE OF YOU RESEARCHING THE SCHLUNDT FAMILY HISTORY:

Al Hamann, a native of Porter Co., IN., has recently completed a genealogy book on “The John & Fredericke Schlundt Family of Porter County, IN. (Jackson Township, near Westville, IN.),” and has sent a copy to the Valparaiso, Indiana Public Library. The booklet, printed off his home computer, is primarily a record of the descendants of this particular Schlundt family. It includes three sections: (a) 7 pages of narrative about the family; (b) a 30-page genealogy register (with index), outlining the names and dates of hundreds of the family descendants; and (c) a 15-page “documentation section” (no index) including his notes from many of the census records, obituaries, cemetery data, or other sources he has discovered in his research.
The easiest way to view this book is to visit the Valparaiso. Public Library. I am not aware if the book is still being published.  For further information, an old contact for Al was at ashamann@tds.net.

Story from my Dad, Keith Shinabarger:
Riley has been raised as a Carter. He found out when he turned 21 that his father was alive and lived in Washington State.

Riley went to Washington to meet his father Frank. Before Riley left Washington, he sent a postcard to Flora, asking her that if his name was Shinabarger, would she still marry him?

Unfortunately, the postcard was lost in a flood in our basement in the late 1970’s.