Portland – End of the Oregon Trail 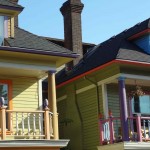 7th Sept – I sit in Pioneer Square with other multitudes, seeking respite from walking, eating a Philly Cheesesteak from a food cart, and planning my next move. So far I have not found what the hoopla is about. I walked the Pearl District where the restoration is ongoing midst vagrants, pornography strewn around the Federal Building, and busy streets.

My visit to Powell’s Bookstore resulted in the acquisition of two books and an appreciation for its size and volume of tomes. Just their history section, in the Purple Room, is as large as most bookstores. Prices are reasonable and selection of old titles vast. Depending upon your interests and browsing techniques, plan several hours over days. Electronic searches and an iPad App are available.

The Oregon History Museum is very good. Its third floor permanent exhibit “Oregon My Oregon” is informative, telling the story of Oregon via exhibits, short movies and indian artifacts. Also the exhibit about local R&R bands who made it big, from Johnny Ray and the Kingsmen of “Louie Louie” fame (J. Edgar Hoover spent big $ and time investigating their lyrics) and my favorite when I was in school, Paul Revere and the Raiders. Brought back a lot of memories.

Walked to Waterfront Park to relax and view the spaghetti network of high bridges and freeways spanning the Willamette River. Hundreds of Canadian Geese flew down for the winter. Bikers and sunbathers taking advantage of last warm days before winter. Locals using the jet fountains for their personal swimming pool to cool off. I am jealous.

Walking along the riverside path I hear the noise of traffic downtown and the hum of hundreds of tires on the old steel Hawthorne St. Bridge. At the northern end of the park is a Japanese Historical Plaza where short quotes and thoughts of children are carved into various rocks; the message is clear and reflects on the treatment of Japanese Americans during the war. Nearby Chinatown consisted of a small gate and a couple restaurants, little of the lively activity I had expected.

Almost back to the hostel, hot and thirsty when Travel God stepped in and my eyes befell Rogue Brewery. Ahhhh, a glass of Hefe!

Big draws of Portland are its bars and restaurants scene, it’s breweries, alternative life styles, and location. I thought “pants falling off his ass” was passé until Pioneer Square. Colored hair and nose rings are popular; tie-dyed and flowered skirts common. This may be Hippie Capitol of the northwest.

I am undecided, now hold the boos and hisses, if I like Portland. It is okay, but I see nothing special. Perhaps I am the wrong age group to fully appreciate this city. Also, I return to the bitch about heat. I was not expecting it to be hot. There are some things I really like as special (music scene, breweries, location to mountains), but on the whole there are other cities I would prefer. I will try my best, tomorrow, to discover the best of Portland 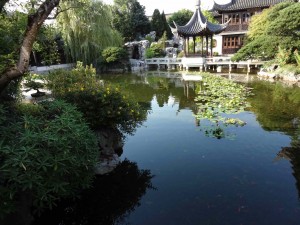 8th Sept – This afternoon I sit in the tranquil Lan Su Chinese Garden watching the Koi and listening to the waterfalls. A peaceful way to end the day and rest my feet. I pause in Painted Boat in Misty Rain – even the name is soothing. Completed in 2000, most of the materials came from China and Chinese artisans assembled the structures. It is considered the most authentic Chinese garden outside China. I especially like the bonsai trees. 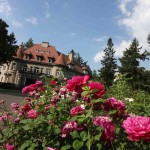 It has been a day of nature. I walked to the bus for Pittock Mansion. The driver was so sorry he was not going all the way there and did not want me to walk the road as there was no sidewalk part of the way. So he gave me instructions to catch the next bus, then gifted me with an all-day pass for trams, busses and trolleys. I made my connections then still had to walk a bit uphill to the house.

Pittock was the publisher of the Oregonian and made his millions through various businesses. He built the mansion in 1914. Very plush with arched verandas, lots of paneling, marble staircase, gorgeous views and gardens. He was also a climber and was in the first group who reached the summit of Mt. Hood.

For my exit, I hiked the Wildwood Path down to Washington Park. The trail is through Redwoods, Sequoias, firs, spruce, cedar, and maple. Well-marked trail and mostly downhill. I arrived in the International Rose Test Gardens, about 4.5 acres of more than 550 varieties of roses. Marvelous spot as not only are there roses of every variety and color, but they have fragrance.

After smelling my way around the gardens, I rode the bus to the other end of Washington Park and visited the zoo. Good place to take kids and easy to maneuver, but not a large zoo. The bat exhibit is good.

Rode the tram back to city center and the Chinese Garden. All-day tickets are a bargain. Actually all city center is a free zone and for $2.40 I can ride anywhere all day, and that would include out to the airport. The mass transit system is very convenient. Otherwise, people are on a bike. Car movement is horrendous.

Ducked into the Deschutes Brewery near the Armory in what is considered the Brewery Blocks (includes Powell’s so truly the best blocks in Portland) for a Mirror Pond Ale. I love these breweries as they work hard to create off-the-wall names for beers. Makes a fun and popular pastime for drinkers.

I am liking Portland more. Big pluses are the transit system, Powell’s, breweries, Washington Park, waterfront, cars absolutely stop for pedestrians, and it is really well located for outdoor activities. However, it helps to be young in this city, and to wear a flower in your hair.

9th Sept – Left Portland before 8 to beat traffic and heat. I was only a couple blocks from 405 but wanted to get out of city; traffic already bumper to bumper coming in. Drive south was uneventful and semi-dull. At Salem I cross the 45th parallel, heading in the direction of the Equator and so it feels as the temps and humidity rise. Once into the mountains, scenery is again green and forested. I was told there is still skiing on Mt. Hood but too hazy to see the mountain. In Douglas County, where Uncle Burton (EF’s half-brother) lived, it is again an area of logging.

I stopped in Roseburg to tour the Natural History Museum, a wonderfully kid friendly and interesting slice of local history, including the truck of dynamite that blew up in 1959 and leveled several blocks downtown. Windows were blown four miles away. 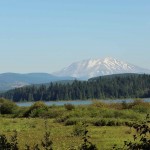 Over Grants Pass and through Medford I again see some high buttes. Continuing downhill on the Applegate “California Trail”, the southern route of the Oregon Trail. As I drove south, it got hotter, and as I reentered the great state of California, browner. The views of 14,602′ Mt. Shasta, also with several snowfields remaining, are impressive, as are some of the nearby lava cones.

I arrived at my Lakehead Antler’s campground on Lake Shasta with clouds and 102 frigging degrees. Tent up in ten minutes and I am off for ice for a cold beer. My log burns while I enjoy the campground, which is almost empty.

Tomorrow it is a long, hot drive until I top the pass and spot the Pacific and home where the temps are a civilized 65 degrees and my sweet Pasha awaits my undivided attentions. For now, the sun is setting, air is cooling, and I am looking forward to a quiet evening with Teddy Roosevelt under what looks like a full moon in the east and to the cacophonous crickets around me.

10 Sept – Had to add a sweatshirt last night as it got chilly. Arose at 7 to beat some heat. My first stop was the Masonic Cemetery in Millville where the sister and brother of my great great grandfather Lloyd are buried. They came out to CA via southern branch of Oregon Trail into Shasta by 1870. 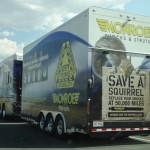 For Pasha who loves squirrels

I drove my wagon a bit faster and headed south via Hwy 101. Thankfully it was cool along this route. It was a relief to see the coastal fog of the Pacific Coast. My road trip route was an excellent choice with interesting sites and good friends, but after 4000 miles, it is wonderful to be home.