The Caucasus – Hits and Misses 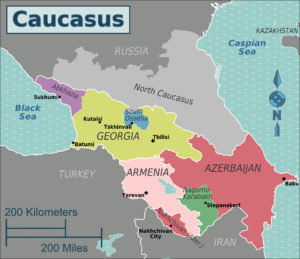 Of all the 84 countries I have traveled in the past 46 years, I have to admit to knowing the least about the countries of the Caucasus – Azerbaijan, Georgia, and Armenia. Little is written about this area beyond snippets of information, a few news flashes, and, if you know an Armenian, possibly you are aware of the atrocious genocide of the twentieth century. When I informed my credit card of my travels, I had to spell Azerbaijan for them (after memorizing how to spell it myself) and inform them that Georgia was a country by Russia, not a state near Florida. END_OF_DOCUMENT_TOKEN_TO_BE_REPLACED

The Queen Who Would Be King

Morning departure from Akhaltsikhe finds us venturing further southwest into the region of Samtshke-Javakheti, named for two of the original Georgian tribes, the Meskh and Javakhs. This region is often seen as the cradle of Georgian culture. The distance is short, just 38 miles, but as is the case in this mountainous country, twists, dips, climbs and time are all relative.  END_OF_DOCUMENT_TOKEN_TO_BE_REPLACED 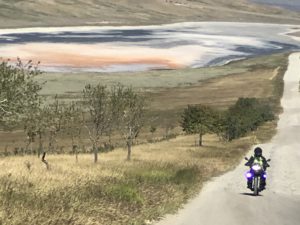 I weave eighty miles of up and down and up, endless around and around on sad roads within these Greater Caucasus. Our Georgian driver speeds us around pot holes, cows and the occasional slow driver. We cross over the Gombori Pass, our final peak at an altitude of just 5,315 feet, but the getting there is what sets my stomach on edge. Along our drive, I am distracted by the small quiet villages and panoramic views of the Alazani Valley, the beautiful waves of long grasses flowing in the gusty winds, and the white and gold salt lake of this high arid plain. Mother Nature has a way of soothing the tortured soul of God Vertigo. So do the Ginger pills I swallowed. END_OF_DOCUMENT_TOKEN_TO_BE_REPLACED

Georgia – A Day of Wine and Song

Sorry, but entering the country of Georgia, I have Ray Charles singing in my head. I’ve had worse jingles haunting my memories (like when I visited Bologna Italy and every time I think of Disneyland). I am told this part of Georgia is synonymous with wine. My kind of place! 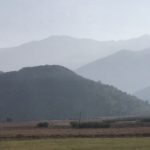 The route is spectacular. We are driving northwest through a large verdant valley and in the distance the Greater Caucasus dotted with state and national parklands. The route becomes more mountainous. We cross numerous dramatically wide, rocky riverbeds. A small stream trickles through but these gigantic riverbeds show all geologic indications of being dangerous, rushing, tumbling rivers in the spring.

Seventy miles inland, we cross the border from Azerbaijan into Georgia. END_OF_DOCUMENT_TOKEN_TO_BE_REPLACED

Today is what busy travelers call a day of rest. We board a bus, greet our driver, strap into our seats, and just go along for the ride. These are days I love because I can relax, gaze at the countryside, observe village life, and see what Azerbaijan looks like outside its modern capital of Baku.

We drive northwest along “one of the most scenic routes in Azerbaijan.” (Actually, Google maps shows it is the only road.)  END_OF_DOCUMENT_TOKEN_TO_BE_REPLACED

The ‘Mad Hatter’ drives us from the Heydar Aliyev International Airport using wide avenues of multiple lanes, flashing his headlights to move others from our path. Government official or royal family? Actually, a Baku Grand Prix hopeful. The Baku City Circuit, a motor racing circuit constructed along these boulevards, is the second-longest circuit on the Formula One racing calendar. I think we are being treated to an example of ‘driving the circuit’. 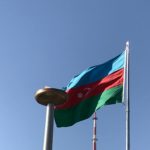 Our little taxi careens and tailgates toward our hotel, certainly beating his previous land record. We exit our taxi in laughter of relief. This was our initiation into the insane driving of Baku. The Baku Grand Prix may run each April, but these wide, one-way streets appear designed more for a Ferrari than a Kia or Lada.

I have landed in Azerbaijan.  END_OF_DOCUMENT_TOKEN_TO_BE_REPLACED