GURUNG LODGE, MAJGAUN, 4620ft, 7 Oct: Thunder and rain most of night but as a result, at sunrise the snow-capped Annapurnas peeked out from the clouds in all its glory . Annapurna Two, Annapurna Four, Fishtail, Annapurna One and Annapurna South, with other peaks nearby, created an 180-degree vista. Here in one spot I can see four of the tallest peaks in the world. As the sun rose, individual peaks were slowly bathed in light and the clouds alternately hid and exposed the magnificent view as we sipped our morning coffees on the verandas. 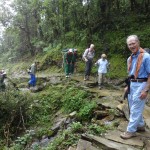 Our trek started after breakfast with about a 2-hour gradual incline on gravel path towards Pothana (6200ft). Trails are wet and muddy. From Pothana we continued a few minutes on flat terrain with broken steps until we reached the top of a hill, open pastureland and a lake. From the lake, it was another 1.5 hours downhill on stone steps, half hour on a switchback path downhill and 15 minutes on a dirt path. Jo, our hiker pro, estimates a total of 2.86 miles. 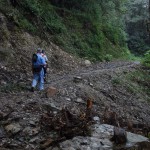 There is controversy about the building of the road in this area. If I had not asked, I would not have known it was the path we were walking. The “road” is a wide dirt way cleared of vegetation and covered with gravel the size of softballs. The rest was mud. An army tank could maneuver the road, a four-wheel might, but otherwise it represents an easier path for the locals. For me, I have to keep my eyes down so as not to make a misstep and injure myself.

We stopped for a few minutes to watch some weavers at work, then continued down a very muddy and rutted road. The trek took us along the side of a hill, bringing us up to the ridgeline. We had a short break in the village of Pothana where many Tibetan traders live and sell their souvenirs. Here was also our second check point for out hiking permit.

We then descended through subtropical forests that included tree orchids, rhododendrons and magnolias. The steps are very slippery and there are a few tumbles but no one hurt. There are numerous large waterfalls and several crystal clear small lakes. Moss covers the rocks in many places, making it hard to comfortably descend the steps. And this proved the ideal environment for leeches. Their nasty little heads were popping up everywhere. I used Deet on my boots and it seemed to help. 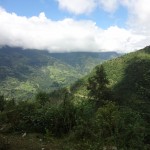 Our trail up and down the valley

According to the Nepalese, this was another easy walk. And it was most of the time. But the steps down are uneven, unstable, wet, slippery and treacherous. We are surrounded by forests, expansive vistas of foothills, valleys, mountain peeks, ever the sounds of crickets and cycadas, waterfalls and the roar of rivers somewhere below. Thick clouds keeping the day cooler but also tease us with brief glimpses of the Himalaya just over the next hill. All so tempting for my attention. Then I trip over a rock, slide on a step, just miss stepping in sacred cow dung, jump over a puddle or stream, and slog thru mud. All the while watching for those damn leeches.

Each time Annapurna appears soaring in the sky, we pause for photos and all agree, it is quite worth it. 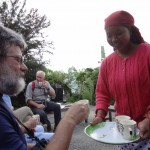 “Firewater” in a cup

After lunch at the Gurung Lodge, we hiked up the hillside to explore the picturesque villages of Tanchok and Patleket. Most villages are small and Tanchok has only about 80 people. Of course, sons are away but send money home each month. The people we meet are always friendly and willing to talk. The children greet us over and over, ask our name and where we are from. Tanchok has its own cultural museum and we were able to see artifacts of their everyday lives and work. After, we were served Raksi, their raw-grained alcohol distilled at home and suitable for paint thinning.

Gurung Lodge, built in tribal style, each with antique carved windows like a traditional Gurung village, is another Ker & Downey lodge. My room, one of 10, is large with beams and 12′ ceilings and slate bathroom. It sits in extensive gardens on the edge of the village. The jaw-dropping views of the surrounding valley and mountains, in particular Annapurna South and Annapurna Fang, are wonderful.

Ker & Downey own or lease all the intimate and unique lodges we use on our hike.  Again tonight we meet in the main room for a happy hour gin & tonic around a fire and eat an excellent meal. Unlike last night, we share the premises with another small group.

I also share my room with two or three of the largest spiders I have ever seen. I say one or two because they all look alike and he might just be moving around.