If you want a happy ending, that depends, of course, on where you stop your story.

KATHMANDU, 15 Oct: Dubious day turns out wonderfully. Out my window I see the Swayambhunath Temple and the rain has stopped. I bid farewell to my wonderful travel mates Teresa and Jim, Susan and Peter, and Jo who left this morning to India and further exciting travels. I fought off the staff who thought I was going too, managed to relax over a hectic breakfast, then arrange for a taxi. My story is not as yet at an end.

I visited the peaceful, for Kathmandu, site of the Boudhanath Stupa. This stupa is a magnificent, relatively tranquil temple in Boudhha. Surrounded by shoppes and restaurants, it offers a colorful walk around the stupa with chanting, spinning of prayer wheels and people-watching as I circumnavigated the stupa. I really like this area and wish the group could have experienced it. Many monks about, including those calling friends from their cell phones. NCell has a long-reaching signal. One very elderly monk was being gently helped along by novices and appeared to be quite respected. 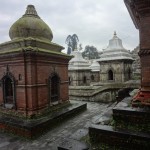 My second stop was at the UNESCO site of the ghats at Pashupati. Here, along the river, is found a huge area of ghats and small temples, plus sadhus, a guy dressed like the Wicked Witch of the East’s monkey, countless real monkeys and not a few cows rummaging thru the masses of garbage. Not an auspicious place for the sacred burning of the body and sending of relative off to their next life. There were several biers burning. I could witness the cleansing of the body, all stages of cremation, and the delivery of ashes into the river. The problem was shoes, boxes, bottles and innumerable trash were also being swept into and down the river. Something about spitting into the river that detracts from the solemnity of the occasion.

It is nearing the end of the festival and streets are relatively empty, most stores closed, vegetable sellers are still active as are the numerous cows and dogs wandering the streets. This is both good and bad as it is easy driving across Kathmandu, but there are few restaurants open so I am forced to have my farewell Gorkha beer at the hotel.

So a happy ending to a cool, dry day. I will have a few hours wait as I read and people-watch in the lounge of Crowne Plaza. Once I convince check-in that I do not need a visa for Taiwan, it looks to be clear flying as I head northeast out of Kathmandu with the Himalayas out my window. It is a bright, clear night above the clouds and in the distance Everest and a long series of snowy peaks sparkle white above the darker layer of clouds.

Indeed a happy ending to my story.