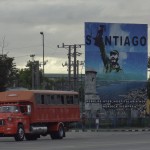 After much research, my final decision was to ask my government’s permission and legally travel to Cuba. I remember the revolution and Fidel’s verbose entry to  international politics, sweated the missile crisis, lived 50 years with the U.S. Embargo of this island, and read about Cuba. Now I wished to meet Cubans and see Cuba for myself – B.C. (before capitalism – alas. I am too late.)

My first Cuban experience is the charter flight terminal at Miami Airport. Charter flights are the only transport to Cuba (airlines like AA fly there but only for Cubans living in the U.S.). Prepare for a three hour process: queue to check travel papers, queue to weigh baggage, queue for boarding pass and to pay for baggage, queue for passport, queue for security. Lots of queuing. But there is much to observe. There may be an embargo, and I am traveling light, but this is not true for Cubans. Perhaps our government knew what it was doing when allowing Cubans to visit Cuba. Huge blue cellophane wrapped bags with everything from 42″ TVs to clothing, clocks, sporting equipment, medicines, and numerous mystery items are on their way to Cuban homes and markets. At $20/bag and $2/lb, Cubans can still earn enough to pay for their $600 flight and much more. Capitalism has arrived to Cuba.

Arrival into Santiago de Cuba was quick and friendly. Cuba wants the tourist and the tourist dollar – their only source of hard currency into the country. I have a stamp in my passport and will pack my letter of permission to visit Cuba wherever I travel in the future.

It is hot and humid, the waters of the Caribbean brilliant blue, trade winds balmy. We travel by our shiny clean Chinese bus to our first stop – San Juan Hill. Tomb of the Unknown Soldier and other memorials to those who died fighting the Spanish-Cuban-American War. No mention of Teddy Roosevelt nor Rough Riders. 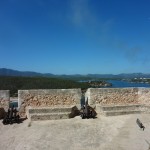 San Pedro de la Roca Castle/El Morro Fortress is an UNESCO site, high atop rocky cliffs, guns pointing out to the Caribbean. A fort has been here since 1590 but most remaining fortifications were built over the next three centuries. Walls are massive and command a stunning view of the sea, a formidable deterrent against pirates and invaders.

The sun is blasting off the Caribbean during lunch at the foot of the fortress. After, we check into our rooms at the five star Meliá Hotel. It was built during the ‘Special Period’ after the Russians pulled out lock, stock and Ruble leaving Fidel embarrassed and desperate for currency. So began his project to build a tourist industry: sort of “build it and they will come.” Tourist have and the government continues to expand for tourism. Most of what I enjoy is not available to 90% of Cubans, and none of them before 2009. To travel here I spend more in one day than a Cuban will earn in five years. I enjoy the luxury of capitalism, the typical Cuban endures poverty. I spend 3$ for a beer; Cubans feed their families for a week for as much.

The roads are clean, mostly well maintained, and uncrowded as there are few cars (only 15% own cars), a few motorcycles and sidecars, and lots of horse carts. Many huge Russian trucks are used as cheap transport of people. Cars are mostly old, many classics as early as 1930s, all lovingly maintained. I see rebuilding everywhere (Hurricane Sandy hit hard here), and amid the larger buildings and nicer houses are areas of tin houses and poor barrios.

Dinner is at our hotel and an embarrassment of riches. Table after table of pizza, pastas, salads, cheeses, breads, fruits, vegetables, fish and squid cooked to order, meats including beef cooked to order (beef is restricted to tourists and children under 7), desserts, wine or beer. Everything is tasty and well prepared. There is a plethora of foods. Not what I was warned to expect. And breakfast is similar, except I get champagne with my omelet.

Presentation by Professor Carlos A. Lloga Dominguez on religions in Eastern Cuba, including influences of Caribbean, Dominican Republic and Haiti. Eastern Cuba sees more voodoo and non-traditional practices. These religions adapted to become unique to Cuba. It is typical of eastern religions to ask spirits of dead and of nature for guidance. Many beliefs cross over between catholic saints and Orichas deities that represent African ancestors. Vodú Cubano practiced mostly by Haitian descendants. 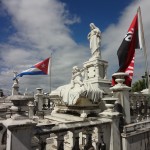 Stopped at the Moncada Barracks where Fidel attacked 26 July 1953 in his failed first attempt to oust Batista. After Batista fled in 1959, Fidel spoke to Cuba from its steps. Bullet holes were artfully replaced after a remodel. Santa Ifigenia Cemetery holds the crypts and marble tombs of many important families including Bicardí, the first Cuban president Palma, and important persons of Santiago, once the capital of Cuba. Watched changing of the guard at the  tomb of José Martí, the Cuban National Hero who everyone seems to worship. Close by is the memorial to  rebels of the 26 July Revolution and those who died in the attack on the Moncada Barracks. It is at this site where Fidel will be buried. All who died in the revolution have the 26 July flag at their graves. 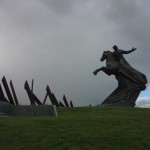 We visited a museum to learn of effects of Hurricane Sandy then walked clean streets to the cathedral square. Many loiterers in the heat and humidity, not a lot of traffic but many motorcycles, and few stores. Nothing to sell and nothing to buy it with. The cathedral is being repaired and who knows how long that will take; there is the municipal building and balcony where Castro speaks every year. We lunched at Hotel Grand on simple but good food (except for some pudding stuff), good music, and bathrooms with no water in sinks. Walked over to the Casa de la Trova where the  instructor and students tried to teach us some Son and Salsa steps. Painful for  locals at the windows to watch my two right feet. Ended our day at Plaza de la Revolution with its massive Russianesque statue of General Antonio Maceo atop his horse and surrounded by 23 machetes leading his rebels against Spanish colonials.

The Spanish colonial architecture is in need of repairs and paint, but the streets create a tableau of life. Many wonderful balconies, windows and doors. Once financially able, the people will be able to restore this architecture to its original beauty. Looking closely, the city is busy and clean. A few destitute people, some barrios of impoverished shacks. Farmers’ markets can be seen with stands of sparse fruits and veggies. Looking more closely, one realizes everything is sixty years old, in need of repair, barely held together by Cuban ingenuity, and in limited supply.

Dinner at a private paladar, the Madre Selva. It is in Mother Selva’s home, cozy and  well run. Food is good with usual choices of pork, fish, or chicken with cabbage and tomato salads, vegetable, and rice in generous portions. Drinks and desert are included. Selva is relatively new to business and is government licensed to cook for about 25 people. It will mean a higher standard of living for this family.

After a hearty breakfast with champagne, we drive to Guantánamo (just kms from American soil and McDonalds). National day of mourning for Nelson Mandela so festivities, music and celebrations forbidden. We visit a UNESCO cultural heritage, Tumba Francesca (French drum) to observe women in long flowing dresses dance, albeit without the drums. Combines French and Haitian music with dances brought over by Haitian slaves after 1791 Haitian revolution and West Africa before that. Across the street is the upbeat three string guitar at Casa del Changüí. Changüí is original Cuban musical rhythm born in the country side around Guantánamo. Heard our first rendition of “Guantanamera” which originated here. Owner was less afraid of the block supervisor, or is one, as the band played several songs. Excellent. I keep looking for Desi Arnez.

Walked thru Plaza Martí to Hotel Martí for lunch. The small Cathedral is being restored; the square, streets and local museum with artifacts of region are simple, in need of repair and lots of colorful paint. There isn’t much but all is proudly displayed. I saw begging and experienced the Cuban desire to touch to get my attention. School children performed dances and games for us. Not all mothers seem  pleased their child performs for the northamericano yanqui. Finished day in the home of the Vicente family who talked about their professional life. Both work under government control at the radio station and only earn about 30$ a month, like most others in Cuba, including doctors, teachers and street cleaners. Social equality.

Almost the entire day Monday was spent with People to People Connections. These experiences are required by our Treasury Department in return for permission to travel in Cuba. First stop was a Performing Arts school to meet with students and faculty. Much like U.S. vocational education except student:teacher ratio is about 2:1   and available to many more students. Teachers paid $30 a month. Then we returned to the Casa de la Trova to watch some lively dance, again with Haitian influence and again a couple of the dancers’ scowls would indicate displeasure when backs were turned. We drove outside of Santiago to an artist colony to talk with artists about their work and the role and freedom of artists in Cuba. Later we explored the Museum of the Spanish-Cuban-American War to learn about what the Cubans call a war of independence and we refer to as the Spanish-American War.

Sergio, our leader, and Guillermo our local guide, are working hard to create a schedule yet keep flexible. Angel, our driver, is just as good backing up as driving forward thru Cuban streets. Most times little traffic but lots of bikes, animals, and walkers to avoid.

Insights include: Cubans taught our airlines how to nickel and dime, it is usually a peso or two for museums but 5 pesos for a camera; everything is in some need of repair and some colorful paint as so much is gray and dark; art I have seen tends to be gray, dark, and abstract; beer is good (Crystal and Bucanero); food is good and plentiful for tourists, pork has been dry but for lunch today roasted pork right from the spit was wonderful; prices have been reasonable with about 2 peso beer, two for one cocktails every night for 3-4$, pizza for 7-8 pesos; traffic is almost nonexistent. Compared to my own street, roads are good. Lots of political signage with Fidel, Che, Hugo Chavez, and “Always the Revolution.”