Alaska’s Inside Passage – Glacier Bay at the Summer Solstice 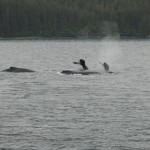 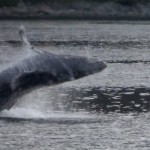 Mild 50° as we sail through Icy Strait into Idaho Inlet where its rounded mountains indicate great glacial action as miles thick ice moved across the landscape to polish the peaks and carve 1000′ valleys beneath us. The morning is gray and misty, waters aquamarine as BD slowly explores the shores off Chichagof Island near Point Adolphus. The bays are deeply cut and already this morning the ship has encountered breaching orcas. I keep eyes to the bay hoping for a repeat performance. The shoreline is close so we watch for glimpses of wildlife. Sailing through a large group of sea otters, these cute fellows are quickly outperformed by a spectacular humpback show with numerous whales feeding and diving with multiple tails presenting their backsides to us. One frisky humpback rolls, exuberantly slaps its flukes, repeatedly breaches, eventually rolls under our starboard to continuing his show on our port side. We hear one humpback as its blows and his trumpets echo against the mountains and across the water. The Rufus hummingbirds, otters, porpoises and bird life are almost ignored.

After lunch we anchor off the tiny town of Gustavus on the southern tip of Chilkat Peninsula. Not much here but a store and gas station but it is a summer residence for many from Juneau and the departure point for tours entering Glacier Bay. Here we pick up our ranger and cultural interpreters. Numbers of ships entering the bay are tightly controlled so we wait here for our turn tomorrow. Perfect for today’s rain and dreary skies and for the 9-holes of golf some passengers want to play at Gustavus’ course. After a 10-minute DIB ride to shore, options are a nature walk, beach stroll, or walk into town to check out the store. Considering the weather, my option is an Alaskan Summer Ale, views of the “beach” and watching for wildlife, which appears to be the bartender, Anthony.

We end the day killing time in Icy Strait as we cannot enter the park until midnight. As we sail the strait we enjoy a gorgeous full rainbow right down to the brilliant purple and a beautiful sunset with numerous islands highlighted in its glow. Much like my day started, so too it ends – watching pods of feeding humpbacks slowly encircling the ship with one frisky juvenile leaping, slapping the water, waving its flukes and repeatedly breaching. To see these numbers of whales as they feed, spout and sometimes rumble is an experience not to be forgotten.

Fast facts: bring medicine for potential colds and sinus, the odds are you will need them; the BD’s linens are great; good binoculars were provided; at Gustavus there are some artists shops who told visitors who found them that had they known of the ship they would have sent a pick-up car thus saving the cab cost into town; if you have a sweet tooth, eat little of the Captain’s dinner and save your stomach for the bounty of sweets after dinner. 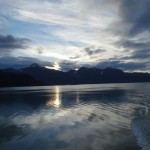 Summer Solstice celebrated in Glacier Bay National Park. Sunrise 3:56 – sunset 10:14 though it never really gets dark after sunset. Eighteen hours of daylight should be enough to see this bay and its numerous glacially-carved fjords, hanging glaciers, towering deeply-fissured granite walls, and hard-to-spot mountain goats. Daylight finds us facing Marjorie Glacier at the very northern end of Glacier Bay. This vast fjord down which we sail was gouged out by a giant glacier which has receded over sixty miles since the Little Ice Age in 1750, over 20 miles since John Muir stood here in 1879. And since I was here in 1995, I can see that the glacier has receded several feet. Today, some of the highest mountains of any coastal range, including 13650′ Mt. Quincy Adams, tower above, designating the Canadian boundary.

The bay was once inhabited by the Huna Tlingits until they angered the glacier and “it ran fast as a dog” to overtake their village in 1750. The Huna fled for their lives to the nearby island of Chichagof. Our Huna cultural interpreter talked of her people’s thousands of years of history here in Glacier Bay, or “Sit’Eeti Gheeyí.”

Marjorie Glacier calves 7′ a day. Even though we watched for more than an hour, I saw about 6″ fall the 180 feet or so into the water. The resulting roar disturbs the thousands of nesting kittiwakes who then add their voices to the solitude of the bay. Distances, heights and depths are deceiving and it is difficult to perceive how dwarfed we are by our surroundings. Loud, reverberating cracks and rumbles indicate glacier movement. To the right, the dirty face of the Grand Pacific Glacier, exiting ice fields a mile north in Canada, does not move any longer. Sunlight illuminates ragged peaks as we wait for a calving. Without windchill factor, it is bearable on deck where we can listen to the NP Ranger’s narrations.

We then turn around and very slowly the ship works its way south through the bergy-bits out of Glacier Bay. The DB passes what seems like endless miles of ragged, snow-clad mountains reaching from sky to sea. I watch for whales, wolves, goats and puffins. What do I see? Lots and lots of birds. Nor did I spot the mountain goat “by the ‘w’ patch of snow and to its right near the lone spruce tree and by that bush.” My eyesight must be failing, but then the goat was 2 miles away and there are countless bushes covering the mountainsides. It is a landscape that is icy, quiet, BIG, and dramatic. Floating close in to Marble Islands, not only do we hear the thousands of birds and puffins and see hundreds of seal lions, but smell them.

The rest of the day seemed to be animal-free. We sail through Chatham Strait; the ship must be in the narrow Neva and Olga Straits by 2 am when the tide is high. The BD seems to speed down the channel and fails to slow for whales or porpoises. However, it is Captain’s night so the champaign is flowing. And after, in the lounge, is a plethora of dessert riches. While trying to stuff down another tart, we watched a nice slide show of our trip.

We push south to Sitka under gray skies, rougher seas and a light drizzle. Miles to go before sunset.

It’s Sunday, 22 June so it must be Sitka. It was a windy, rocking passage last night but a beautiful early morning entry as we sailed along a coastline lined with boats and homes. Temperature is 58° but standing on deck proves impossible in the powerful headwind. We, the Baranof Dreamers, are met in port by owner Bob Allen who thanks us for choosing their company. 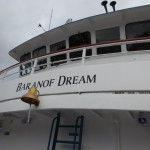 If you desire to see Alaska’s Inside Passage, you won’t find a better way to see it than via Alaska Dream Cruises, part of Allen Marine Operations, locally owned and operated out of Sitka Alaska. If there was one common thread among the Baranof Dreamers, it was the belief that our ship of 46 was far superior than any 2000+ passenger ship. We can brag that we stop for whales while the large ships stop for jewelry stores. It’s a different world on the Baranof Dream – the world of real Alaska.