Southeast Alaska’s Inside Passage – Aboard the Baranof Dream 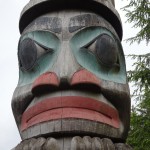 What has 100 jewelry stores, five large passenger ships, and 10,000 pedestrians crammed into six small blocks? Ketchikan, Alaska. Unless you want to purchase a diamond or a fur coat, watch a duck tour boat drive down the street, or pose in front of its iconic welcome sign, it is best to find a historic bar and order an Alaskan beer then get out of town ASAP. This is exactly what I did. I cursed the miserably crowded streets, enjoyed the ambiance and beer at the historic Gilmore Hotel, then boarded the Baranof Dream to better destinations.

The Baranof Dream is the perfect-sized ship, dwarfed by the huge and clumsy 2000+ passenger ships that stain the port. There are more passengers on Front Street than salmon in the waters of Creek Street. The BD is for exploring the small harbors of Alaska’s Inside Passage. In a matter of minutes, it’s passengers are boarded, settled into their cabins, and ready for their first stop just across the bay but a world distant from the nightmare crowds of Ketchikan. 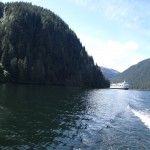 The Baranof Dream is owned by the Allen family of Sitka, big supporters of local Alaska. It transports 46 people, all of which voice a disdain for the big passenger ships that inundate the major ports with thousands of passengers more interested in jewelry stores than totems. In fact, these large ship companies own many of the stores in these ports. What do they bring to the local economy, one wonders? Fortunately, they cannot dock in the smaller ports which remain less developed but also less tainted. The real Alaska may not appeal to every visitor, but the ones on this ship appreciate the lack of commercialism, the atmosphere of simplicity and ruggedness found in small towns. The BD has good food, comfy if small rooms, adequate lounge and bar, interesting talks, and a great crew. At least 12 passengers are from Australia; New Zealand and Britain are represented. The rest of us are from across the US from Washington DC to SC, Phoenix to CA. Most are well traveled and smart enough to know that sailing the Baranof Dream is a wise choice for seeing the Inside Passage.

We sailed to nearby Metlakatla on Annette Island, total population 1,375 give or take a new arrival. Metlakatla is a community of Tsimshian people who fled British Columbia’s cultural and religious restrictions along with a missionary of the Anglican Church of England, William Duncan. Congress granted recognition in 1891 by creating the Annette Islands Reserve. Today it is the only federal Indian reservation in Alaska. Although the majority of its population is Tsimshian, Metlakatla also is home to diverse tribal affiliations such as Tlingit, Haida, Aleut, and Yupik. Within the tribes there exists a close society of the four major clans of Eagle, Raven, Wolf, and Killer Whale. At the Long House, the tribes social center, we were treated to a performance of music and dance and the opportunity to jump around the floor as a whale or raven. The regalia was native as were the instruments.

Dawn of our second day found us exploring the inlets and fjords of the magnificent Misty Fjords National Park with its 3,000-foot glacier-sculpted cliffs, snow-capped mountain peaks, numerous waterfalls, and smooth as glass waters. Not much mist, just clear blue skies, fluffy clouds, and blue waters. We debarked into a smaller skiff to glide into a narrow inlet graced by towering waterfalls, mountain vistas and solitude. The fjords are spectacular, kind of Yosemite meets Glacier NP.

An advantage of our small ship is when we encountered Humpbacks. Several were feeding and circling so we just hung out with them for an hour. Our ship is about 144′ so we easily blended with the whales and they seemed as curious as we were. 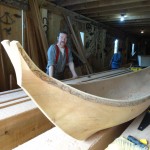 It is Thursday so we must be docking at the small village of Kasaan on Prince of Wales Island (one of the largest islands in the US) where we walk through an old growth forest to The Chief Son-I- Hat Whale House, the only remaining Haida clan house in North America. We received a good explanation of totems, the long house, and the pride of the locals in its efforts to revitalize the community and its native culture. It is clear that the docking of ships like the BD is instrumental in supporting these efforts. 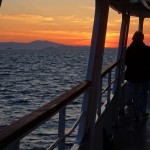 In the afternoon we sailed around Prince of Wales Island to go ashore at Thorne Bay for a walk that included one restaurant, grocery, post office, library, three churches, and a logging truck stacked with ‘music wood’ destined to be turned into Steinways. Once the largest logging camp in the world, the area now supports about 900 people. No worry about big ships or crowds of people here, but we were warned to watch for cars, though I don’t know how any stranger could be missed.

Friday dawns to a brilliant blue, sunny morning off Wrangell. Awaiting for our docking space, it is easy to see the tide is out – the climb to the pier via gangplank is at about a 45 degree angle, indicating at least a 20′ tide differential. The full moon and already low tides make a huge gap between high and low tides for the day. 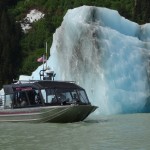 Jet boating on the Stikine River surrounded by icebergs

In Wrangell, we board jet boats and zip to the mouth of the Stikine River, over waters from 3 to over 300 feet deep. Filled with salmon later this summer, now it is calm and quiet as we head toward the boundary peaks along the Canadian border, 6000 to 9000′ mountains topped with snow and ice fields. Most peaks are rounded as a result of glacier ice; jagged, sharp peaks were those that had towered above the glacier ice, over which man and beast must have migrated on their way south. Eventually ice bergs and still frozen waters stop our progress, but not before we are able to enjoy sightings of moose, eagles, bear and a few floating cabins used for summer residences.

Wrangell, home of the Stikine Tlingits and only community to fly the British, Russian and US flags, has grown in the past twenty years since I last visited, but the town remains small enough to easily be seen in minutes and walkable from end to end. I strolled to the beach to see the petroglyphs, many of which were under water. There I met the friendly ‘petro’ cat who insisted upon climbing the rocks with me and showing the way to the best rock carvings. Several carvings have been removed to the new museum in town, others continue to be eroded as the sands and waters take their toll.

In the afternoon, we retrace our wake to Coffman Cove on the Northeast side of Prince of Wales Island. This Tlingit village is small and we are the only cruise ship to dock here. It’s been rough here since the pulp mill closed in 1990s. We walk thru the community more for exercise than sights. Local artisans have set up tables proudly showing their crafts, including one ex-fisherman who now builds gorgeous furniture. I wish we could leave more of our money in this community but little is purchased.

Fast facts: temperatures are between 55-65 degrees, mostly sunny, rain on Saturday; leeward is usually quite comfortable; cookie time in the lounge begins at 3; sunrise at 4:01 am; sunset at 9:51 pm; seas smooth; speed never seems to exceed 10 knots; don’t eat the Mac and cheese even tho it has crab in it; food is excellent and portions are sanely proportioned; sometimes just order both entrees; good AT&T coverage in most places but don’t wait for wifi; Captain slows for whales. BYOB. 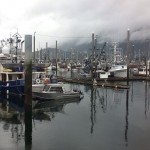 Saturday morning is cloudy and wet as we dock at Petersburg pier, tide is out and the gangway is incredibly steep. This fishing village with its plethora of boats is of Norwegian heritage dating back to the 1800s. On its streets I still hear more Norwegian than English. We attend a short dance and storytelling presentation at the Sons of Norway Hall. Kids are enthusiastic and pastries are double sweet. After a bus ride, we hike a short distance under a persistent rain along the ‘muskegs’ or peat/moss bogs. I walked back to town in a harder rain but enjoyed the quiet; not much moving until I get around the port. There, I see hundreds of fishing and crab boats, interesting sloughs, quiet streets and historic old wood buildings. All houses are built on pilings. In fact, everything has to be built ‘special’ in this water-soaked environment, including incredibly deep road bases.

During the evening we sail north thru and around the Frederick Sound. The ten-story ship passing through the Sound is like a ghost, it’s passengers missing out on the wonders of the living. Clouds hug mountains covered with pine and spruce; occasional treeless swaths indicate past slides; snow and glaciers top peaks; sun peeks around low clouds; choppy and cold waters are rich feeding grounds for Humpbacks and Orcas. Too choppy? Our little ship just heads in another direction. See a whale? We slow to watch. We play with several Dall porpoises and circle great leviathans feeding and breaching amid the islands of the Sound with brilliant rainbows arching in the background.