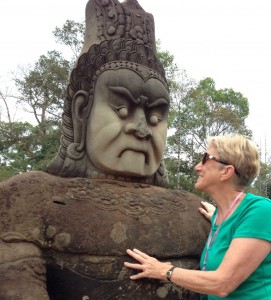 I have read about and seen photos of the Angkor Wat Archeological Site, but nothing prepared me for the size, complexity and grandeur of its temple ruins. I was unaware that this complex is as big as the city of San Diego and contains over 110 individual temples built over six centuries. Thus, temple architecture and design is as varied as the personalities of the Khmer kings who built them. Many temples were dedicated to Hindu gods but over time were converted to Buddhism, while others started out Buddhist and later all images of Buddha were chipped away or adapted to convert the temple to Hinduism. After the 16th century, the temples and the country peacefully adopted Theravāda Buddhism.

Angkor was the world’s largest pre-industrial city, with an elaborate infrastructure which connected an urban sprawl of at least 390 sq miles with the well-known temples at its core. Angkor, at its peak, supported up to one million people.

It is impossible to describe the temples of Angkor. Too many adjectives, too few adequate adjectives. I climb stone steps; squeeze thru and around mazes of passageways and dark corridors; stoop under intricately carved lintels; pass walls of stone carved with images of Buddha, Apsara dancers, Hindu writings and gods, and bas-reliefs of Cambodian life; find my way to the interior of a temple to pay homage to Buddha or a Hindu Linga. The skill of construction and beauty of carvings are unique to each temple, as are the temple size and use. Some kings built more temples than others.

I ramble among the ruins of Ta Prohm with its towering Giant Fig trees and thitpok or silk-cotton trees whose massive roots lovingly wrap then strangle the sandstone and lava rock of this Buddhist temple; Ta Keo is dedicated to the Hindu god Shiva and consists of towering peaks and simple decoration; Preah Khan is a massive monastic complex where the Buddha’s images have been vandalized or adapted during the Hindu resurgence; and finally we stop at East Mebon which consists of three levels, five towers and dedications to the Hindu God Shiva.

After lunch, we return to Angkor to visit the east-facing Prasat Kravan temple built of small sandstone bricks of a unique pinkish hue and dedicated to the Hindu god Vishnu; Banteay Kdei, a sprawling Buddhist complex which is the worse for wear as a result of building with an inferior sandstone and sufferings from vandalism of its Buddha images; Srah Srang and it’s rather polluted lake and island temple, site of past photo ops with such personages as Charlie Chaplin and King Sihanouk; and Pre Rup which is a Buddhist temple and sight for colorful sunsets if one wants to scale its very steep steps.

A second day begins at the South Gate of Angkor Thom, a moated royal city and the last capital of the Angkor empire before the capital moved to Phnom Penh in 1432. The city is over one square mile of some of the empire’s greatest Buddhist temples, including my favorite: Bayon. The complex has five gates and we enter through the South Gate, lined with demons and gods. Bayon Temple is a masterpiece. Giant smiling stone faces, four to a tower: 54 towers and 216 faces, each gazing toward a cardinal direction. The bas-reliefs around the temple depict both battle scenes and those of everyday life of the Khmers.

Other lesser temples within the walled city of Angkor Thom are Phimeanakas, an unadorned Hindu temple shaped like a pyramid which served as the king’s temple; Baphoun, a Hindu temple to which was added the world’s largest reclining Buddha; the Buddhist Terrace of the Elephants, a 8′ high and 1000′ long wall fronting the Royal Enclosure and its temples, adorned with carved elephants and garudas which are large humanoid bird men. Garudas appear in both Hinduism and Buddhism. At a far end of the terrace is the Terrace of the Leper King.

So many temples, too little time. But we saved one of the best for last. Angkor means city and Wat means temple in Khmer. It is generally thought that Angkor Wat was a funerary temple for King Suryavarman II, who had the temple built. Angkor Wat is a three-tiered Hindu complex dedicated to Vishnu. It covers over 500 acres. Its five lotus towers are iconic symbols of Cambodia with a central tower of 699 feet. The corridors lined with bas-reliefs are stunning as are the towers themselves. Very steep steps lead to the third-tier corridors and inner courtyards where I find a standing Buddha which dominates the central tower. 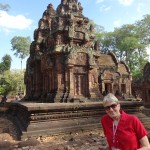 Banteay Srey, the Citadel of the Women

A special temple found a short drive thru the Cambodian countryside is Banteay Srey, the Citadel of the Women. This Hindu temple dedicated to Shiva is unique as it is built of a pink sandstone with intricately carved doorways and lintels. It is a smaller temple constructed not by a king but a Brahmin counselor. Its deep carvings are probably the best examples of Khmer carvings of any of the temples I have visited. Banteay Srey is a perfect end to our temple visits in Angkor.

Some final impressions of Siem Reap:
– Does Immigration really need nine men to process my Visa? I hand my Passport and $30 to Man#1 who passes it down the line until Man#9 holds it up for me to come forward to claim it.
– I discovered the Night Market area and Pub Street are paved and inviting to tourists. It’s where the action is.
– The classical Apsara dance performance is interesting but not after a long day of clambering over temple steps in heat and humidity.
– The cool, dry season is relative. It is hot and humid no matter the description. I would hate to experience what the hot, rainy season feels like.
– Food has been very good: tasty morning glory stems, nice use of spices, able to pick out the red peppers which are very hot, a selection of wonderful sauces. Fruits are wonderful. Best beer is Cambodia Beer.
– The black pepper is wonderfully mild and tasty.
– Can’t even begin to read or understand the Cambodian Khmer language.
– The Asians snapping selfies has become a Kodak moment for me. There must be a glut of photos on Facebook. Must one’s image be in every photo? It is a curious aspect of the electronic age. The hand-held Monopod extenders for the iPhone must have been at the top of everyone’s gift list this year.
– Many Cambodian flags in celebration of Victory Day on 7 January, commemorating the end of the Khmer Rouge in 1979.