It is a new flying world and I have to adjust.

Flying is not what it used to be. I have fond memories of flights taken during the 1970s and 80s, less so in the 90s and certainly fewer fond memories since the turn of the century. 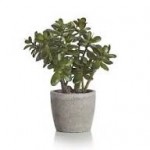 I remember flying with a jade tree. I was taking a large Crassula ovata to my sister in Indiana. It was fragile and I didn’t want to check it. So I took it onto the plane with me. I strapped it into the adjacent seat and we flew to Chicago together. It didn’t occur to me that it would probably freeze to death there, but we did have a nice flight.

I remember being able to exit my commuter flight at LAX and walk across the hall to catch my connection to Chicago 40 minutes later. I was at my sister’s house in time for dinner. Didn’t worry about missed connections or cancelled flights. Didn’t sit around for hours in the airport.

What a luxury when planes flew with empty seats and leg room. I could stretch out in three seats and sleep on long hauls. Incredibly, there were flights that departed less than half full! Those were the days of luxurious room without having to pay extra for it.

There was a day when I could rely on the plane departing on time, or just departing. No rescheduling, no willy nilly cancellations. I didn’t have to plan hours between flights in order to make connections. No rebooking because new schedules eliminated enough time between connections. No sitting in an airport wasting time. Gates did not close 30 minutes before departure. I remember United zipping me across the tarmac in their cart so I could make my next flight.

I enjoyed free drinks and food, snacks and attention. I complained about the peanuts but at least I got something with my drink.

Wow, I even remember being able to get a carry on under the seat!

I guess I am reminiscing about ‘the good ole times’ because I have just spent 37 hours getting to my destination. At least 17 hours of that has been spent sitting in airports and, because I had a sane moment, luxuriating in an airport hotel room where I could get a shower and stretch out on a bed. I don’t even want to address the added confusion of crossing the International Date Line and what it does to the biorhythms of my body. This year, 2015, the day of 3 January doesn’t exist.

To reach new adventures, it is necessary to fly greater distances. And airline consolidation, safety issues and cost cutting has forced a new paradigm on my psyche. No longer am I able to catch connecting flights in a timely manner nor depend upon my airline being on time or departing at all. All are nightmares faced by today’s travelers and all have happened to me in recent memory. The lesson has been to readjust my idea of flying point to point.

I schedule flights with hours added to a schedule for connecting flights. Airport bars reap the benefits as I budget exhorbitant monetary amounts for a draft beer and dinner. I have succumbed to a loyalty charge card that includes Club Passes. I find myself packing peanut butter sandwiches as if I was still in grade school. I’m adding overnight stays, like today, in order to break up the pain of cramped seats, crowded planes, long hauls and lack of sleep. And I peruse Goggle maps to find a midway point that might be an inviting stopover between my point of departure and point of final destination.

Does this add to the cost of travel? For sure. But it also eases the pain and strain of flying.

I have accepted that flying is not what it used to be and never will be again. I miss the good old days of convenience and comfort. But an airport massage, draft beer, room and sauna, or extra days in some exotic city are pretty good substitutes for the good old days.