A bumpy but scenic bus ride on Burmese roads takes me through landscape characterized by prickly bushes and stunted trees, simple villages and poor roads. Ox-carts carry wood, water tanks and families. Most farms still use oxen to plow fields. First stop is a Palm Tree farm where a man scurries up a very tall palm tree to get drippings for his pots below. Palm produces alcohol, palm oil, palm sugar, baskets and ornaments from fronds. A 25-year-old ox grinds peanut paste which tourists feed back to him in a nice symbiotic relationship.

Another brief stop is at a rural village, rustic and very poor. We are swamped by friendly children. A classroom of 3rd graders are studying for their English exam at the end of this month. Unfortunately, everything is rote memorization and quickly forgotten.

My far destination is Mount Popa, 4981 ft above sea level, an extinct volcano with spectacular views. I just have to survive the barefooted climb of 777 steps leading up Taung Kalat (pedestal hill) and its Nats. I hear there are also pesty Macaque monkeys.

Taung Kalat is a sheer-sided volcanic plug, which rises 2,417 ft., kind of like Devil’s Tower but with a Buddhist monastery at its summit. At one time, a Buddhist hermit maintained the summit stairway of 777 tile and iron steps, but today men use mops and brooms to clean debris and monkey crap. Donations are asked and worth it as I must walk up barefooted.

Taung Kalat is often referred to as Mount Popa but Mount Popa is actually the volcano that caused the creation of the volcanic plug atop where the monastery sits. The actual volcano (with its crater blown open on one side) is generally called Taung Ma-gyi or “mother hill.”

It is a twenty minute climb to the top, past numerous opportunities to junk shop, buy flowers for the Buddhas or Nats, feed the monkeys or just enjoy incredible views. I have a panoramic view, though dust and haze, of pagodas, monasteries and miles of fields. The surrounding area is arid, but the Mount Popa area has over 200 springs and streams so is like an oasis in the desert-like central zone of Burma.

Mount Popa, Burma’s Mount Olympus, is considered the abode of Burma’s most powerful Nats. Legends abound about these spirits. Although all 37 Nats are represented at the shrine on Popa, only four of them – the Mahagiri nats, Byatta and Me Wunna – have their abode here. Statues of 36 Nats are at the bottom, the 37th “Big Nat” is at the top of my climb.

Nats are nature or green spirits representing spirits of trees, water, rice fields, etc. The official 37 Nats were founded by King Anawrahta of Bagan in the 11th century. Almost all of the 37 Great Nats were human beings who met violent deaths. Much like sainthood, nats can be designated for a variety of reasons, including those only known in rural regions of Burma.

The Big Nat atop Taung Kalat

Nats have human characteristics, wants, and needs, like the man who was a drunkard before becoming a Nat – believers present him offerings of alcohol. Nats are flawed, having desires considered derogatory and immoral in mainstream Buddhism. During a Nat festival when Nats are appeased, Nat mediums are possessed of a Nat’s spirit which gives him the ability to communicate between the Nats and the people. Historically, the Nat medium profession was hereditary and passed from mother to daughter. Since the 1980s, transgender women or gay male transvestites have increasingly performed these roles. I saw some Transgender mediums walking in the festival parade my first day in Bagan. At the time I did not know of their personal relationship with the Nats.

Some Burmese would say Nats are merely superstition. However, the belief in Nats has a positive contemporary effect as it appears they act as a deterrent against environmental destruction, somewhat. Indiscriminate felling of trees, particularly of large ones, is generally avoided owing to the belief they are dwellings of tree spirits. Today, if they could designated an “anti-plastic” Nat, that would be progress.

Many Burmese pilgrims visit Mount Popa every year. Locals take their Nats very seriously. Before King Anawrahta’s time, hundreds of animals were sacrificed to the Nats during festivals. Burmese superstition says that on Mount Popa, one should not wear red or black or green or bring meat, as it could offend the resident Nats. Not to offend the Nats nor the monkeys, I changed out of my green shirt and traveled great distances to assure my good luck into the coming year.

After lunch at the Popa Mountain Resort, we drive back to Bagan, making a rural “pit stop” by some Acacia trees. Our day ends trading our bus transport for that of ox-cart. 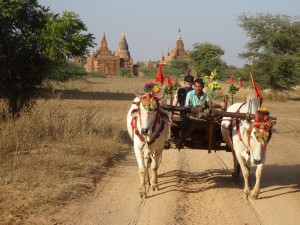 Ox-cart is the traditional way of travel used by the rural people of Myanmar. Each cart is pulled by two lovely, colorfully decorated, Brahmin oxen. These long-lashed, patient ladies (this farm girl didn’t check but probably castrated bulls for better cooperation) pulled us along dirt roads and among temple sites off the beaten track. The sun is low and the terra cotta pagodas are bathed in beautiful light and shadows. The only sound is the grinding of cart wheels. This is a magical way to see the pagodas, much like these monuments have been seen for centuries.