Yangon Airways: “We’ll get you where you are going,” eventually. Our short flight to Yangon has been extended by returning north to Mandalay, then “Hi Ho Hi Ho its off to Heho we go” to the southeast, before flying southwest to Yangon, Rangoon for those who remember this country as Burma. Like many cities, its colonial name was replaced with its traditional name.

Our first stop, for whatever reason, is a government gem shop. I’d rather see another pagoda. Enough said.

We also make a brief stop, while the bus waits in stop and little-go traffic, at a floating barge on the Kandawgyi Lake. Evidently it is a fancy restaurant built for tourists in the last few years. Perhaps we needed to see further gold dragons. Don’t know why we battled awful traffic to come here. I’ve see water, I’ve seen boats, I’ve seen dragons, I’ve seen restaurants. Enough said.

Traffic in Yangon is horrendous. Years past, an opposition party, I guess in spite, banned motorbikes in the city. Unfortunately, they overlooked cars. I have never seen such a mess. At least traffic moved in Hà Nội. Los Angeles at rush hour is speedy compared to the stop and no-go of these roads. I am impressed with the Porsches, BMWs and Rolls Royces. There is great wealth in Yangon. Perhaps to better appreciate bumper to bumper traffic, we were driven around downtown colonial Yangon. When the British left in 1948, they left their buildings and architectural influence. Today, it is gritty and in need of maintainance. I did see the red roof of the home of Aung San Suu Kyi across the lake.

For Burmese Buddhists, Shwedagon Pagoda is the most sacred of all Buddhist sites, one which all Burmese hope to visit at least once in their lifetime. Also known as the Great Dagon Pagoda, Shwedagon is a 325 ft stupa atop Singuttara Hill, to the west of Kandawgyi Lake. The stupa is believed to contain relics of the four previous Buddhas (Buddhists await the coming of the fifth Buddha). Relics include the staff of Kakusandha, the water filter of Koṇāgamana, a piece of the robe of Kassapa, and eight strands of hair from the head of Gautama, the last Buddha who died 483 BC. 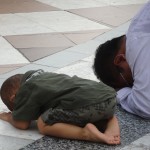 It is believed the pagoda was built by the Mon people between the 6th and 10th centuries. However, according to legend, the Shwedagon was built over 2,600 years ago, making it the oldest Buddhist stupa in the world. According to tradition, two merchant brothers from what is now Afghanistan, met the Lord Gautama Buddha and received eight of the Buddha’s hairs. The brothers traveled to Burma and with the help of the local ruler, found Singuttara Hill, where relics of preceding Buddhas had been enshrined. (When I hear stories and legends about Buddha, they refer to this last Buddha from whose teachings Buddhism was founded.)

There are four entrances, each leading up a flight of steps to the platform on Singuttara Hill. A pair of giant leogryphs, lion-creatures, guards each entrance. The base of the stupa is made of bricks covered with gold plates. In fact, the entire stupa, all 325′ of it, is covered in gold leaf renewed every five years.

The pagoda is busy with activity as the upcoming days celebrate not only the 100th birthday of national hero General Aung San but also the annual Shwedagon Pagoda Festival. Unfortunately, the 325′ stupa is being regilded and cleaned so is covered with protective sheeting thus dampening the effect of its gleam.

Above the terraces is the bell-shaped part of the stupa. Above that is the turban, then the inverted alms bowl, lotus petals, the banana bud and then the umbrella crown. The crown is tipped with 5,448 diamonds and 2,317 rubies. Then comes a flag-shaped vane. The very top is a diamond bud tipped with a 76 carat diamond. Impressive, expensive icing on the golden cake.

Chinthe – is it paint or gold gild?

The gold seen on the stupa is made of genuine gold plates and attached by traditional rivets. A 15th century Queen may have given her weight in gold to adorn the stupa, but she didn’t attach it. Even if I buy a 12″ gold plate for $600, only monks and other males can access these upper terraces to attach it.

Shwedagon – it’s all in the details

It is customary to circle Buddhist stupas in a clockwise direction. In accordance with this principle, I begin at the eastern directional shrine, which houses a statue of Kakusandha, the first Buddha of the present world. Next, at the southern directional shrine is a statue of the second Buddha, Koṇāgamana. At the western shrine sits the third Buddha, Kassapa. Finally, at the northern shrine is the statue of the fourth Buddha, Gautama. And if you are not Buddha-ed out, do the traditional circumnavigation of stupas two more times to see the hundreds of smaller Buddha statues, statues of the Great Nats, and demons and garudas galore.

Two points of history about the Shwedagon Pagoda.

The “shoe question” on the pagoda has been a sensitive issue to the Burmese since colonial times. Burmese always remove shoes and socks at all Buddhist pagodas. Early British colonialists and European visitors as well as troops posted at the pagoda, openly flouted the tradition. It was not until 1919 that British authorities finally issued a regulation prohibiting footwear. However, the exception was government employees on official business. The regulation and its exception stirred up the Burmese and played a role in the beginnings of the nationalist movement. Today, the British are gone and no footwear or socks are allowed on the pagoda.

February 13 will be the 100th birthday celebration of General Aung San. In January 1946, General Aung San addressed a mass meeting at the stupa, demanding “independence now” from the British with a thinly veiled threat of a general strike and uprising. Forty-two years later, on 26 August 1988, his daughter, Aung San Suu Kyi addressed another mass meeting of 500,000 people at the stupa, demanding democracy from the military regime and calling the 8888 Uprising – the second struggle for independence.

When asked about free speech and the right to protest, I am told people can still get arrested for protesting if they do not first get a permit. The arrested can be sent to hard labor camps with very poor food and many die there. “Sometime they shoot you, but not like before.”