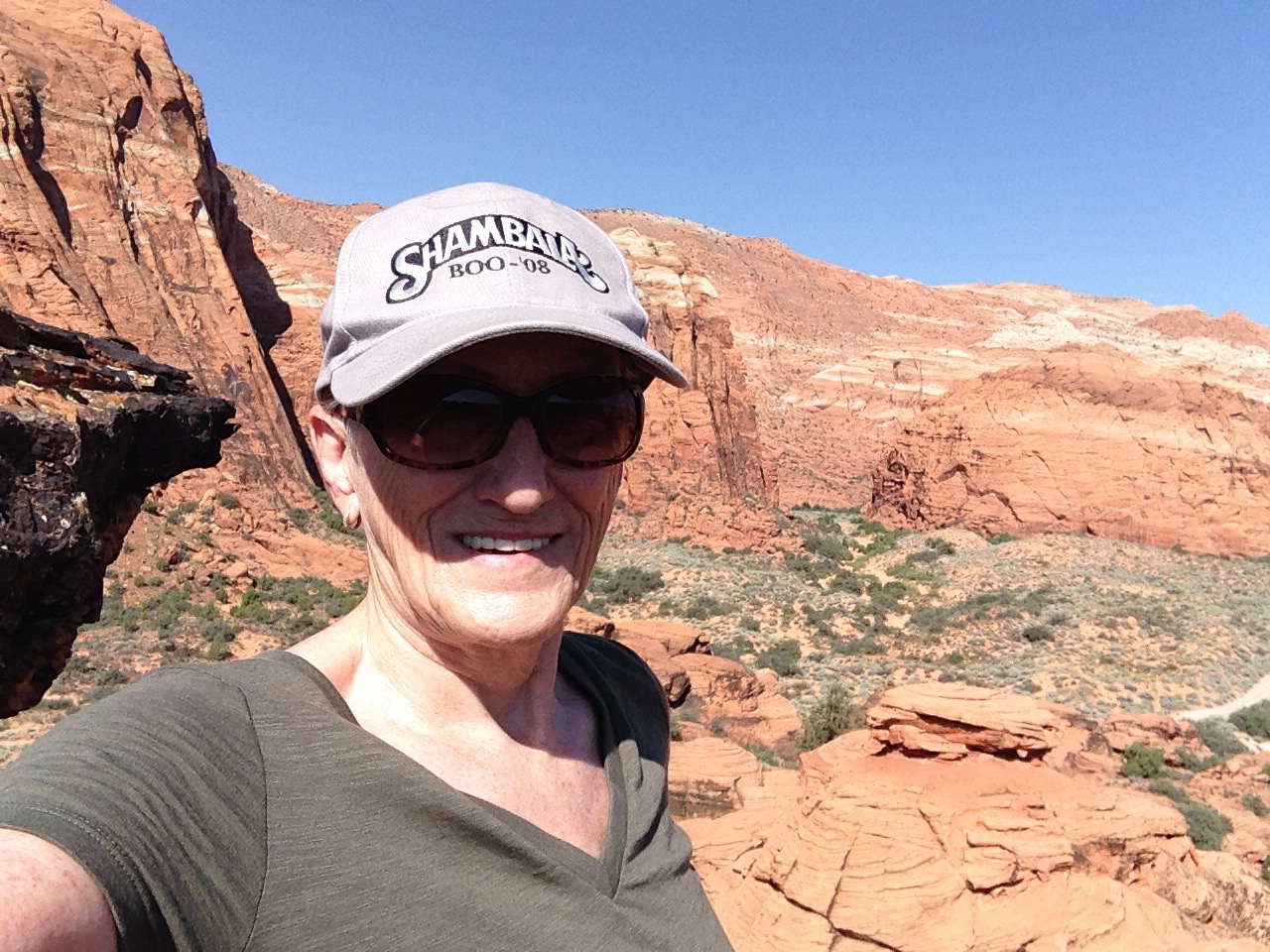 Dinner conversation with the gentleman next to me led to a recommendation to visit Snow Canyon State Park. I’m on my own, I have time, I can’t see why not. So this morning I drive five minutes out of Nevada, 10 minutes across Arizona, and witness Utah turn on the beauty switch. Mother Nature blooms in Utah.

Snow Canyon SP is about an hour north of Mesquite NV, an easy side trip on my way to the North Rim of the Grand Canyon. First inhabitants appear to have been the Anasazi Indians 200 A.D. to 1250s, followed by the Paiutes into the mid-1800s. Yet, as is our fashion in settling the Wild West, credit is given to the White Man when in the 1850s the Mormons “discovered” Snow Canyon.

In the truth of geology, Snow Canyon has been in the works for more than 183 million years. Huge sand dunes up to 2,500′ thick once covered Utah. These dunes eventually ‘cemented’ into stone domes and orange and creamy white sandstone rock formations. Water and wind have shaped the sandstone and formed canyons. As long as 1.4 million years and as recently as 27,000 years ago, nearby cinder cones erupted causing lava to flow down these canyons and fill them with basalt. Ancient waterways were redirected and carved new canyons, leaving older lava-capped ridges towering above the sandy bed of this sea of sand. 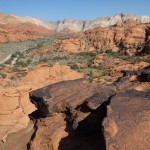 Atop overlook – miles of rippling domes and blue green sage

I hike Hidden Pinyon Trail along a deep red-sand path that weaves around rocks, under overhangs, up slopes, through canyons of towering rock and past sand sage, cactus, yucca, oak and pinyon pine. The rocks look like waves of water as they ripple downslope. Twists and turns take me along narrow pathways, scrambling over shelves of rock, while carved holes dot the sandstone walls above me. Ideal nesting sites for peregrine falcons.

It is a spectacular hike to the overlook where I can see miles of rippling domes and blue green sage. White mountains of sandstone hover in the background. Nothing heard but the sound of the wind, sculptor of these domes. Odd shapes. Balanced rocks. Black lava-topped ridges. Below are waves of red rock, hidden canyons and cubby holes. Sandy trails lead into the distance where Anasazi once hunted and Mormons lost their cattle.

It is about 120 miles to my night’s destination: Jacob Lake Campground site #44. Some red sandstone buttes dot the otherwise flat landscape. I climb in altitude as I once again enter Arizona territory. A couple small towns, little traffic, yellow warning signs for elk but no self-respecting elk would be out in this heat. Clouds of white, skies of blue. The bright blessed day, the Sun blasting and baking the surface of the land. After gassing up in Fredonia, I start to climb onto the north rim of the Grand Canyon and for the first time in many hours I see trees of green.

I sit at my camp site, drink in hand, log burning in the fireplace. A soft breeze gently moves the pines overhead. Temperatures cool. I camp at 7000′ and it should be a good night for sleeping and watching a sky filled with stars and the dark sacred night. And yeah, I think to myself, what a wonderful world.