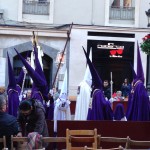 Plans for museums and historical landmarks fly out the window after five minutes of bearing witness to a Semana Santa procession. Skip the Picasso Museum, another church, the park, the Alcazaba Palace. Save our energy. This time of year is all about the spectacle of the cofradias. Having the stamina for Holy Week in Andalusia is our sole focus. The next two nights we will celebrate Semana Santa in its birthplace – Málaga.

For over 500 years, Málaga’s religious celebrations during Holy Week draw crowds by the thousands. We are two witnesses among hoards of Spaniards. Processions start on Palm Sunday and continue until Easter Sunday with the most dramatic and solemn on Maundy Thursday and Good Friday. Images from the Passion on huge ornate tronos (thrones), some weighing more than 5 tons, are carried through the streets by more than 250 costaleros. Penitents dressed in long colorful robes and tall, pointed hats, followed by women dressed in formal black and mantilla carrying candles, brass bands playing solemn music, drums beating the marching cadence – all create a spectacle not to me missed.

Holy Week is celebrated diﬀerently among Andalusian cities with some cities observing processions in meditation and silence, others full of happiness, cheer, spontaneous saetas sung, and applause as the images pass by. Málaga gives us an opportunity to see what is supposed to be a noisier celebration.

Following the schedule for Tuesday and Wednesday, we find six different processions through town – Rocio, Penas, Esperanza, Estrella. Rescate, and Sentencia. Processions begin at 3 PM and go through the streets until 4 AM over a 4 km route. Masses of people in bleachers, chairs or standing, watch the continuous parade of floats, bands and penitents for hours as it passes. The procession is much the same as we experienced in Granada with three basic exceptions that I could discern.

Firstly, certainly it is less solemn than Granada with the streets turned over to the festival. Countless kiosks sell everything from cotton candy to toy drums for the kiddies. Streets are lined with chairs and bleachers and thus obscure more of the parade. The crowds are horrendous.

Secondly, the bass drumming is not as loud. I do miss that. The entire procession seemed more subdued, fewer bands, quieter drums. However, the surrounding festivities make up for this with noisier crowds. 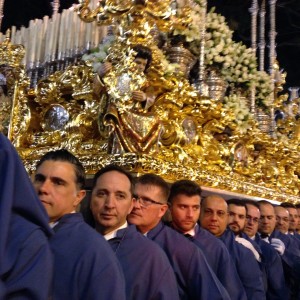 Last, the costaleros, or bearers of the floats, are exposed. Floats are mounted on long beams running its length. The floats are at least 10′ x 35′ and borne by masses of men about 10 across and 35 to a side, beams pressing upon their shoulders as they lockstep through the streets. I estimate at least 150 men bearing the weight of a float of well over a ton. I do not see men beneath the float as in Granada. The sway and precision is the same.

Ornate images of Virgin Mary or The Passion slowly move through the streets. To maneuver the corners takes extra precision. Here the men can see where they are going as they inch through the streets lined with people. Our second night we are in the front line and within inches of its passing. The men walk about 100 feet then are given a single signal to set the float down. They rest a few minutes then on signal, as one, hoist the float onto their shoulders to continue down the street. This they do for over 4 km, for over eight hours, eventually covering the entire route before returning to their home church.

Like true Spaniards, we take a break for dinner about 10pm. Gabrielle has discovered the joys of paella and sangria so, while listening to the music and drums echoing in the streets, we dine and rest our feet.

After dinner, we meander back towards the massive Málaga Cathedral, looming huge in the center of the oldest part of the city. This cathedral is a beautiful mix of stone pillars, carvings and towers in the new Gothic style. It’s one of the most impressive church exteriors I have ever seen. The interior will have to wait for my next trip. These nights it is all about the streets and processions. 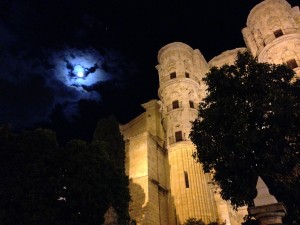 Our timing is perfect. We see a small crowd about its doors. It is a night of the full moon, the cathedral towers and facade are lit, the crowd waits. Towards midnight, a possession approaches. Penitents and musicians usher the float to the church, always with the pounding pounding of the drums that drive the cadence of the participants This float depicts Jesus on the Cross and is slowly moved up a ramp, through the dim light of hundreds of candles as the massive cathedral doors swing open to receive it. The warm light of the cathedral illuminates and welcomes. The outstretched arms upon the cross sway and inch their way as if the scene were alive as it returns to the embrace of the church.

My senses are on overload with Semana Santa celebrations and I depart for hotel and rest, happy having experienced two evenings of processions.

My recommendation is to go online and seek seats, a hotel overlooking the route, or rent a balcony for Semana Santa festivals. All possible, all expensive, all worth it. Good street views are difficult and the locals know ahead where they are. We were very lucky to be at the cathedral our first night. The second night, starting after 9pm, we were even luckier to be at a spot and realize we were on the front line of multiple approaching processions. That afforded Gabrielle some excellent photo opportunities not possible with lesser equipment. However, a good seat or hotel room above the procession route would be desirable at any cost.