A young Nazareno during Semana Santa

Semana Santa, or Holy Week, is celebrated by Spanish Catholics. It is a breath-taking celebration that takes place from Palm Sunday to Easter Sunday (March 20th-27th this year). This is a week of annual commemoration of the Passion of Jesus Christ; it is filled with music, costumes, and processions. Along with that comes the celebration of life, people, and the sacrifice from their Saviour.

This week of celebration started out in the 16th century and originally had regulations set there by the Council of Trent. These regulations ensured that it was based on true Catholic traditions and not Pagan traditions. During 1600-1750 new brotherhoods were formed within the Catholic church. The brotherhoods are responsible for organizing the events during Semana Santa. The brotherhoods had some rough points throughout history like the Napoleonic Invasions and the Spanish War of Independence. These things eliminated a large number of the brotherhoods. However, in 1921 the “Malaga Holy Week Brotherhood Association” was created to help finance Semana Santa and it became a huge tourist attraction, thus keeping the brotherhoods from being eliminated. 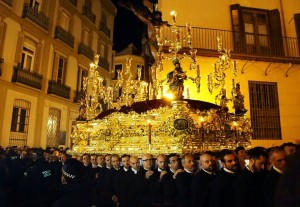 Many men carry the heavy Trono back to their home church while police try to control the crowds.

The traditions of Semana Santa include, processions, music, and giant Tronos (floats) portraying scenes from Jesus’s death or the Virgin. The music of Semana Santa is usually played in minor keys, so it sounds extremely sorrowful; instruments like coronets and drums help create this gloomy sound. Two major Tronos are carried, one of Christ on the cross, and one of Virgin Mary. They are carried by many men called Costaleros, and they will have to carry these huge Tronos for many hours and for great distances. Some processions last for as long as 14 hours and travel for 4 kilometers along a main route. Then they return back to their home church which could easily add a few more kilometers. It is considered to be a big honor to carry the float despite the long hours and searing pain involved. The Penitentes follow them. The Penitentes are symbolic because they dress from head to toe in robes; it means that they are undergoing public penance for their sins. They usually carry candles or wooden crosses and walk the city barefoot. Some even put shackles and chains on their feet as a form of penance. Children run through the streets, collecting the wax from the candles and making it into a ball. The candles are blessed, collecting the wax would be a way for children to bless themselves (and give them something to do). 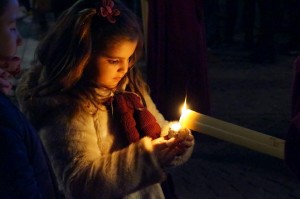 A young girl collects wax from a blessed candle during the processions of Semana Santa.

The way the people dress during Semana Santa is…out of the ordinary. Looking at pictures of this event you see people dressed like the Ku Klux Klan. There isn’t a link between them. The people wearing these costumes are called the Nazarenos or Penitentes and are generally male. However, times have changed and now women are participating as Nazarenos alongside the men. The cone-shaped hats they wear are called capirotes and they are pointy because it symbolizes a rising towards the heavens. The Nazarenos are seeking forgiveness and the capirotes symbolize their penance and desire to be closer to the heavens. They are covered in robes to hide their identities while mourning Jesus Christ’s death, and wear different colors depending on the procession they are attending and brotherhood they belong to. On Easter Sunday everyone removes their costumes and celebrates Jesus’s resurrection.

Millions of people are attracted to this event full of symbolism and tradition every year. This event gives us an insight to a different culture and we can experience how they live and what they value. This educates us and gives us a broader view of the world and how it works.