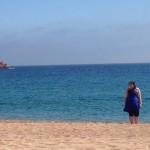 Gabrielle and the
Mediterranean

Women can not survive on museums, churches, and city architecture alone. Thus, we drive the short distance to the Costa Brava and the small picturesque beach town of Tossa de Mar. It is a beautiful drive through low mountain passes, curving and winding down to an alluvial plain and the Mediterranean.

Tossa de Mar was my destination in the summer of 1972. I remember it’s old fortress ruins above the beach, the small town and cafes and British bars. And I remember the 20 people per square yard on the beach. I remember walking over to a kiosk for something to drink, turning around to return to my beach towel, and being confronted by masses of hairy bodies and no clear path nor idea where my spot was. This was pre-GPS days, not that it would have helped. Somehow I got my directions, after all the azure ocean was in front, the town in back, and by Devine guidance found my towel.

Today, much has changed. A one-time retreat for artists and intellectuals (photos of Eva Gardner and Frank Sinatra are common), Tossa now hosts an international mix of visitors but has escaped the worst of the tourism market and remains on a smaller scale than nearby Lloret de Mar or Blanes. The fortress is still here; the narrow cobbled streets house souvenir shops, cafes and restaurants; the beach is beautiful. 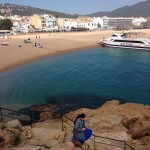 Tossa is like an open-air museum where ancient ruins overlap with new world, speedo tourists. It is believed the area has been continuously populated since the Neolithic period. Between the 4th-1st century BC the first Iberian settlements arrived, followed shortly after by those ever-traveling Romans in the 1st century. Sometime in the 12th century the mediaeval town was walled off and a castle was built on the highest point, which eventually was replaced by a lighthouse that is still operational. By the year 1500 the first houses were built and little has changed within the old walled city since. Except, in 1989 Tossa was the first place in the world to declare itself an anti-bullfighting city. Took cajones to do that in España.

Parking right at the beach (off season, 5 hours costs less than 8€), we eat breakfast overlooking the sand, some small fishing boats and blue Mediterranean, waiting for the fog to burn off. The medieval walled quarter of Vila Vela and castle is atop the headland to our right. We, of course, have to walk up to the castle, both for views and to watch the snorkeler and fisherman below, vistas of a wide crescent beach and town beyond. A statue of Ava Gardner rests halfway up the walk – the actress had been filming locally and warranted some recognition (Pandora and the Flying Dutchman starring James Mason and Ava Gardner in 1959).

The 12th century fortified battlements and towers built to defend the city from pirates create a picturesque backdrop to our afternoon. The best part of Tossa remains the wonderful crescent of course sand beach, sun, and quiet; the thought of returning to the end of winter in Minnesota with a sun tan appealing.

The biggest change from summer of 1972? Gabrielle and I and a few pigeons have the entire crescent of sand almost to ourselves.