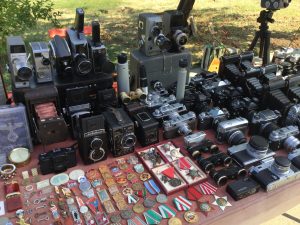 Memorabilia and shopping treasures around the streets of Sofia.

Sofia is a city of monuments and statues commemorating religious, political and literary figures. Sprinkled among these are the gems of communist pride and propaganda. All are worth a moment to appreciate what is being expressed.

The Monument to the Tsar Liberator on Tsar Osvoboditel (Tsar Liberator Blvd.) is an equestrian monument in the center of Sofia. It was erected in honour of Russian Emperor Alexander II who liberated Bulgaria from Ottoman rule during the Russo-Turkish War of 1877-78. He was also known for his attempts to liberate his own serfs, a deed that warranted a few assassination attempts, one successful.

The Neoclassical memorial’s foundation stone was laid on 23 April 1901, St George’s Day, in the presence of Knyaz (Prince) (Foxy) Ferdinand I of Bulgaria, and completed in 1903. Ferdinand also attended the monument’s 1907 inauguration together with his sons Boris and Kiril, Grand Duke Vladimir Alexandrovich of Russia, son of Alexander II and father of Nicholas II.

Made of black polished granite from Vitosha, the Monument to the Tsar Liberator consists of a pedestal, a middle part with figures and a massive Neo-Renaissance cornice finished with the sculpture of the Russian Tsar on a horse. The bronze wreath at the foot was donated by Romania in memory of the Romanian soldiers that died during the war.

The main bronze bas-relief depicts a group of Russian and Bulgarian soldiers led by the goddess of victory with raised sword. Portraits of Grand Dukes, Counts and Generals surround the soldiers. Other bas-reliefs feature scenes from the Battle of Stara Zagora, the signing of the Treaty of San Stefano and the opening ceremony of the National Assembly, as well as portraits of prominent figures from the period. 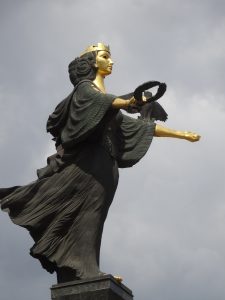 The bronze monument to Saint Sofia stands some 80′ above Batemberg Square. Sofia means “wisdom” in Greek, thus she holds an owl in her left hand and a laurel wreath of peace and success in her right. She replaced the previous statue of Lenin, which was taken down but shown mercy and relegated to the Museum of Socialist Art rather than used as cobblestones for the streets.

There are various Monuments to the Soviet Army, to workers and to the people. The citizens of Sofia, and Bulgaria, may not know what to do with these gigantic relics of the communist era and some show the neglect of time and memory. One can’t miss a soviet statue as its size and style are unmistakable.

Monuments range from the simple Russian Square Monument to the bas-reliefs and Soviet sculptures found in Knyazheska Gardens, around Krystal Garden, and the other numerous gardens of the city. There is also a large monument to the people and revolutionary workers in the gigantic Park Borisova Gradina. 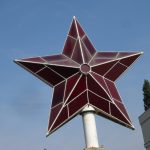 But for a collection of socialist art one needs to take a pleasant walk down the park trails that will take you out to the Museum of Socialist Art southeast of central Sofia. Here, within a small area, are located the socialist statues thus far removed from Sofia. No one wanted to just dump them so it was decided to open a museum and charge a small entrance fee. In return, there are some good descriptions of the communist era in Sofia along with excellent propaganda films from the era. In the garden are the Lenin statue that once stood where Saint Sofia now reigns, and the huge red star that previously stood atop the communist party headquarters downtown.

The National Museum of Military History is an excellent museum detailing centuries of Bulgarian military history. It is well explained and documented. For anyone interested in this sort of history, the museum is a must. Outside are countless machines of war, but it is the inside displays that warrant some time.

Another museum worth a visit is the small Archaeological Museum in central Sofia. The museum is in a renovated mosque and houses artifacts found while digging the streets and metros of the city. There are centuries of Roman and Ottoman artifacts beneath the streets of Sofia, which explains why ti takes so long to build a metro system.

Not had enough of Sofia? There are also some wonderful walking tours sponsored by Free Sofia Tours. I participated in Dino’s informative Free Sofia Tour of downtown sites and the interesting Communist Tour led by an exuberant Niki. Though Niki is too young to remember much about the era of communism in Sofia, he has interesting stories about his parents’ generation living under socialism. Meet the tours at the lion in front of the Courthouse. 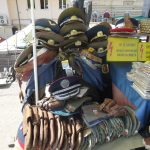 There are street markets and kiosks in every garden and park. I enjoyed the Zhenski Pazar or “Woman’s Market” along Bul. Stefan Stambolov. It has a little bit of everything. The large and varied Central Market across from the Banya Bashi Mosque is a good place for purchases of spices and lunch. And there are sellers of military memorabilia, religious icons, and crafts throughout the city’s gardens and side streets.

Walking is wonderful in Sofia. Streets are pleasant, in spite of the traffic. Strolling narrow walkways, busy streets, countless parks and lively plazas will fill an afternoon. Particularly fun is the pedestrian area of bul. Vitosha where the beer and finger foods are very reasonable and you can watch the endless parade of people.

My takeaway on Sofia? Though not perfect, I really like the city. The drawbacks? Sofia needs to get control of the destruction coming from graffiti, skate boarders, and smokers. Surprisingly, for all the unleashed dogs running around, the streets are very clean, though uneven. There are many beggars and idle young men on the streets and lots of public drinking, especially in the afternoons and evenings. In spite of these things, walking the streets is safe and enjoyable. Street sweepers abound and I saw numerous people stooping to pick up bits of trash. The gardens and parks, pedestrian streets and cafes, street markets and kiosks are numerous. There are underground passageways under many busy streets and I saw strict adherence to pedestrian right of ways. And best of all the churches remain free!

English is found everywhere. However, one recommendation is to learn the Cyrillic alphabet as it will help to recognize and pronounce words even though you may not know what the word means. Metros are easy to navigate (one comes in from the airport) and inexpensive. Also inexpensive is the yellow SuperTrans taxis that you can hire from the airport; door to door service, airport to my hotel, was less than 11 lev. 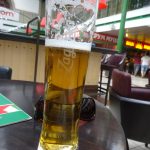 Overall, prices in Sofia are very reasonable. A good dinner and beer can be had for $10. I had a very nice suite with breakfast at the Hotel Lozenetz for $26. Beer (I liked Zagorka) or wine, that potential budget buster, can be found in markets for about a dollar and in cafes for about 1.50$. And I can’t criticize a country that serves a choice of eggs, cheeses, olives, tomatoes, and baklava for breakfast.

The yellow brick roads of Sofia are now recognized as a cultural heritage. All seem to lead to a comfortable chair in a small cafe amid trees and fountains and a cold beer. My kind of town.