Amsterdam is a city of wide streets and narrow passageways all contained within a widening ring of successive canals and cut through by the Amstel River. One might view the city as a marshland crisscrossed by a maze of winding cobblestone avenues, and canals crossed by quaint bridges. But once you begin walking its streets, you realize this is a quite maneuverable city of interesting architecture, history, and art. Amsterdam continues to be one-of-a-kind in Europe, and not too different from the city that I saw over 40 years ago.

August, 1972:   “What one will do for a free beer. It is sunny but windy and cool today. Went to Heineken’s Brewery and stood in a long line as only 200 allowed on tour. Watched the fog burn off and sun come out. After 2 hours, I got a 10 minute tour and was led to the beer. They set them up as fast as you could drink them. I should have been a better drinker. Also, I visited the diamond cutters and the Municipal Museum. We later went across the street and enjoyed Rijsttafel, a traditional Indonesian dinner here. Amsterdam is ruined by the loitering, filthy hippies. Impossible to see the War Memorial on Dam Square because of them. It has to do with the liberal drug laws and their Magic Bus tours: board a colorfully painted VW bus and light up for your tour of Amsterdam.”

Today, the experience of Dam Square is still a maze of people, pigeons, and politic, but it exudes a vibrancy not to be overlooked.

I haven’t been in Amsterdam since the 80s and I’m happy to see a modern, vibrant city that retains its gritty nature. It remains a city for young and old, but mostly young. With the smell of marijuana permeating every street and alleyway, the Red Light District a “hot bed” of entertainment, and its casinos, sex shops, and casual life style, few cities offer visitors such a free and open experience as Amsterdam. In fact, I am convinced the Dutch are not the ones smoking the marijuana on the street or keeping the girls working full time in the Red Light District. Amsterdam attracts large numbers of young adults who flock here for the hassle free life. Good or bad, Amsterdam is what it is and makes no apologies.

My niece and I are in the original ‘sin city’ where sensitive nostrils get high just strolling down the street. We enjoyed a very interesting walking tour with Sergio of Freedom Tours, who gave us a good introduction and local insights into the city. The rest of our three days here in Amsterdam were spent enjoying the museums of Van Gogh and the Rijksmuseum, floating the waters on a canal cruise, visiting the Old Church and Saint Nicholas Basilica, and touring the Anne Frank House and Dutch Resistance Museum. Just walking along quiet streets and canals is pleasant with the trees still barren from winter and the endless variety of Dutch Renaissance houses.

In the air above our heads is a floating refrigerator being transported from third floor to the ground by an expert pulley system as stairways are much too narrow and steep to use for deliveries. And situated on barges anchored to the canal wall is the floating flower market with its thousands of inexpensive tulip bulbs (edible when starving). Prices are shocking. If I wanted to schlep them back to the states, I could purchase 100 bulbs for 8€, less than $10. Additional kiosk browsing and shopping can be had in the numerous cheese shops and at the Waterlooplein flea market. And window shopping the sex shops is probably more of an education than one wants.

Amsterdam vibrates with energy and is crammed with visitors even at this early time of year when the north winds still blow cold off the seas, though the Red Light girls are warm and cozy behind their protective glass. Didn’t know they use the red lights because it makes them look better.

The variety of food ranges from Chinese to Dunkin’ Donuts, from New York Pizza to Indian. Where is the Dutch culinary efforts? I think the only local food we had were the waffles and Nutella. The Heineken and Amstel beers I can get at my local supermarket. One night we splurged on the unique Indonesian dinner of Rijsttafel, meaning “rice table.” It is an elaborate meal adapted by the Dutch of the West Indies region of Sumatra. It consists of many (twenty to thirty) small side dishes with a variety of rices.

Though the canals and streets are relatively clean, the real danger comes from the numerous bicycles zooming past. To say that Amsterdam has a plethora of bikes is a wild understatement. There are trams, cars, and motorcycles, but it is the swarms of bicycles that will run you down. Amsterdam has more bikes then people. I hear the trams coming, but bikes silently glide up on me with the stealth of a B-2 bomber. Few seem to use their bells. I suppose if they did, they would drown out the frequent tolling of the church bells and carillons. And to exacerbate the problem, the streets, walks, and bike paths are all of similar cobblestone. Hard to tell what is coming and when you are encroaching into someone’s lane. 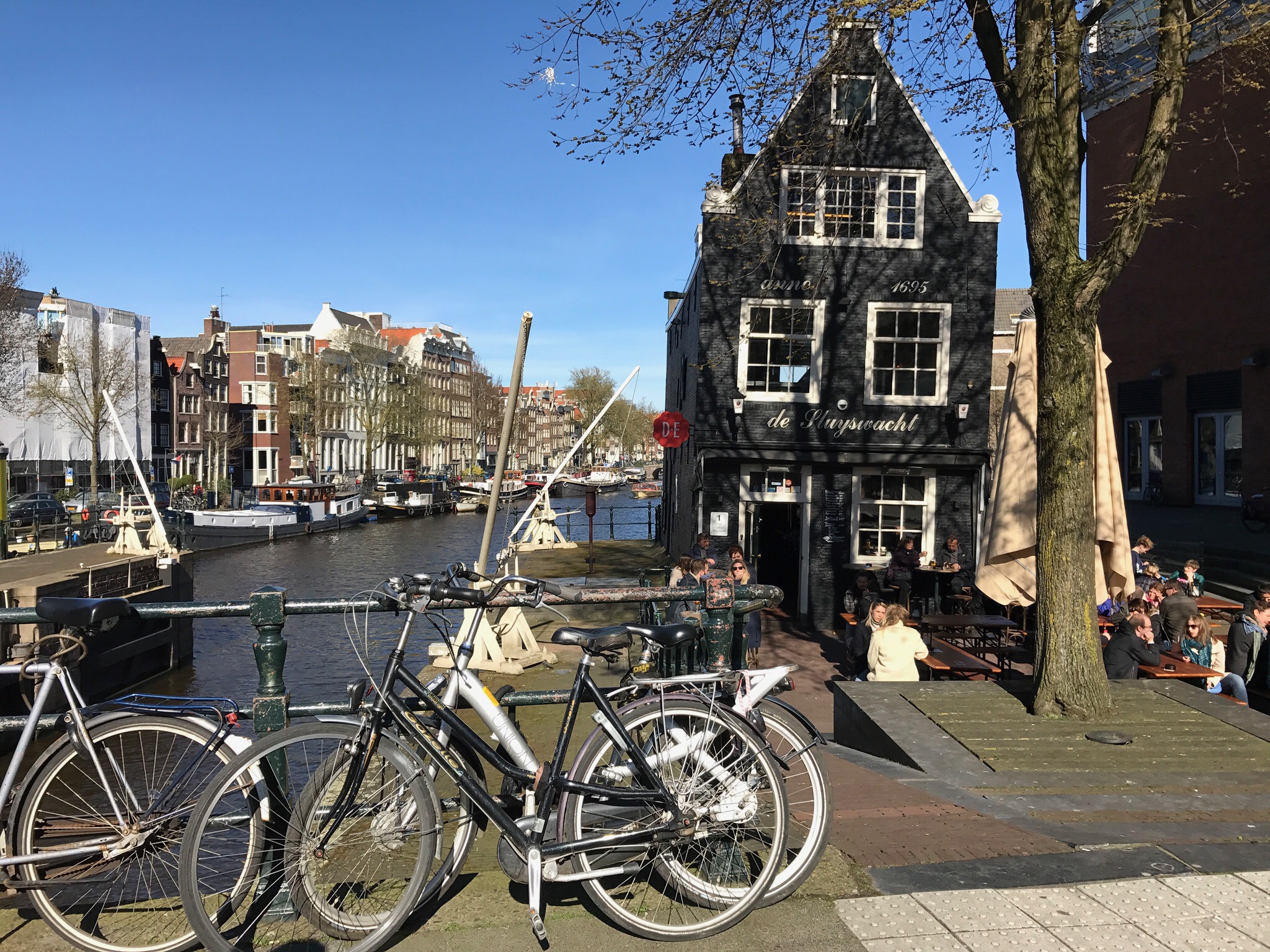 In spite of the requirement to climb two flights of narrow, winding stairs to our second floor room, we sleep only about 12 feet above sea level. That is because the city is built upon tree trunks. Pounded into the sea floor, a house is built upon the trunks as a support against the seas. Buildings are high and narrow with attics and gables. One can easily see dates on the buildings ranging from 1661 to the early 1700s. And many houses are showing an unhealthy tilt, a sign the underlying tree trunks are slowly loosing their battle against the sea.

Visiting the Dutch Resistance Museum felt like a timely experience. The museum houses a fine presentation of documents and film of the city during the years of Nazi occupation from 1940 to 1945. The displays center around the question that faced everyone during that time: Adjust – Collaborate – or Resist?

Asking yourself a question, that’s how resistance begins. And then ask that very question to someone else.