The day is too beautiful to be marred by sadness as I descend into the tunnels and trench fortifications of Dodengang along the Ypres Salient. No sound of the booming German guns; no threat of sharp shooters. It is warm and sunny in the trenches without a hint of water or ankle-deep mud. 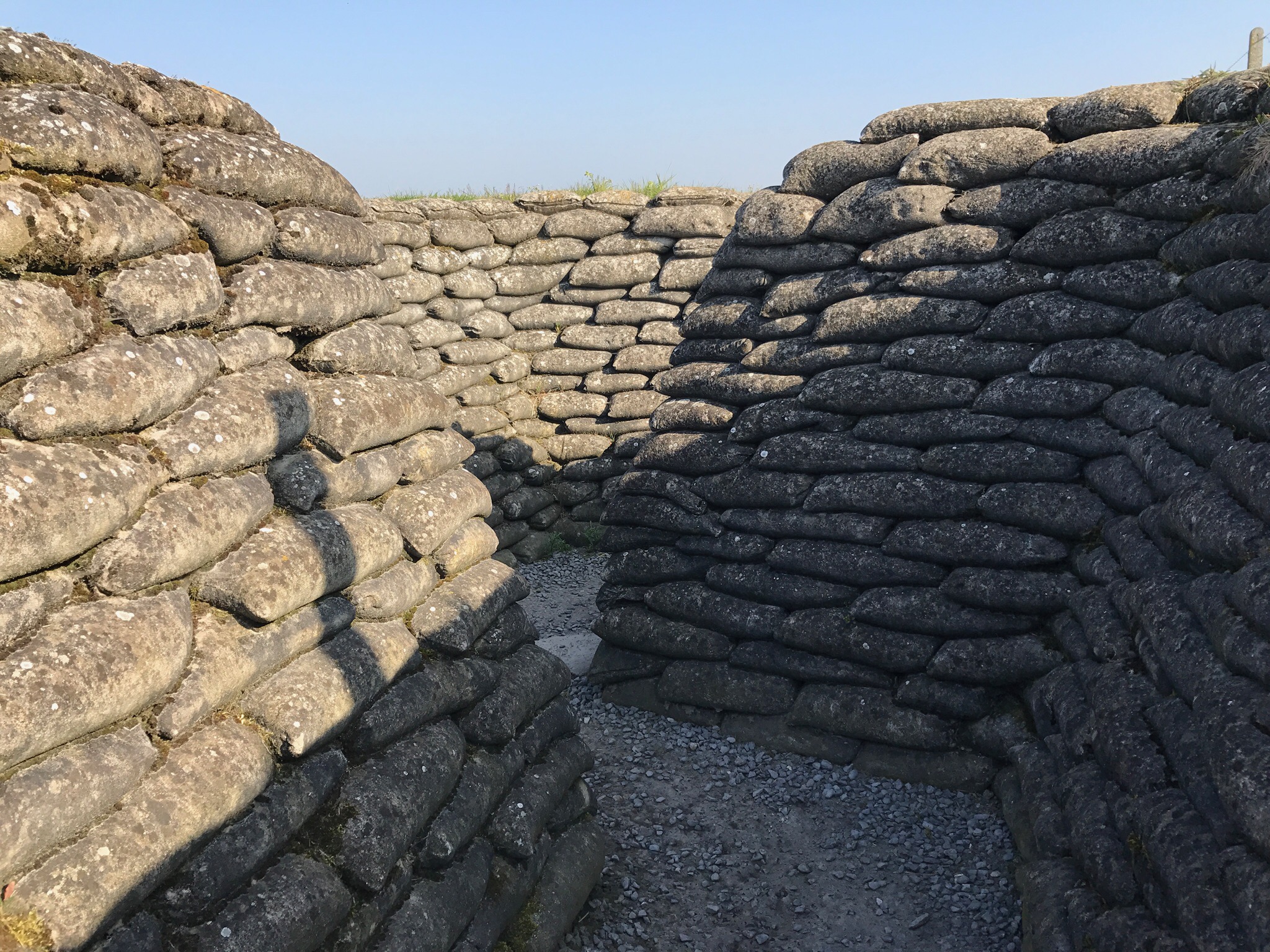 Following the banks of the Yser Canal, the Dodengang Trenches were a vital part of the defense network for Ieper (Ypres). Though the path along the 300 yards of trenches is now a boardwalk, I can get a feel for the maze, tunneling, and life of the men who lived within these fortifications for almost the entire war. Known as “The Trench of Death,” many Belgian soldiers died protecting this Front against the Germans. Just north of the Belgian fortifications is an area where the German army successfully crossed the Yser and built a concrete bunker, only a few yards from the Belgian army’s position.

On 2 August 1914, the Belgian King Albert refused passage through Belgium to German troops and the government ordered its soldiers to obstruct any German advance. What followed in October was The Battle of the Yser. The Belgian forces halted the Germans along this 22 mile section of Front. Thus, the German “Race to the Sea” was halted but at great cost, possibly as high as 20,000 Belgians. German casualties may have been triple that. Belgian soldiers dug the trench and a series of bunkers to face a similar line on the German side and held this line for four years. Their biggest danger in that time? German sharpshooters and flooding of the Yser of this sea-level location.

The museum at Dodengang explains the digging and manning of these trenches up until the final offensive in September 1918. Atop its roof are panoramic views of the trench lines, canal, and the 276′ Yser Tower a mile away. The Tower is a peace monument and commemorates the soldiers killed on the Yser Front during The Great War.

A second must-see museum is the ”Memorial Museum at Passchendaele 1917.” It is an excellent, modern museum that covers the history of the Flanders’ war effort. Experiences range from the opportunity to smell replicas of the various forms of gas soldiers faced, to walking through examples of types of trenches dug. The grounds include a large pond, pleasant walks, and several garden memorials. Each year, a country is invited to create a memorial garden, all in the form of a poppy.

The Battle of Passchendaele (Third Battle of Ypres) took place from July to November 1917 as the Allies fought for control of the hills and ridges south and east of Ieper (Ypres). The ridges’ names read like a Who’s Who of battles in Flanders: Hooge, Mont Sorrel, Sanctuary Wood, Polygon Wood, Black Watch Corner, Hill 62, Hill 60, Menin Road, and Passchendaele, just 5 miles east of Ieper.

In late summer of 1917, Commander of the British armies in Europe, General Douglas Haig, launched a series of failed assaults against German forces holding the ridges above Ieper. Argument continues concerning the wisdom and high casualties resulting from this decision. The weather, rain, was atrocious.

The ridges and dense woods gave good cover and the German forces held a front of about 22 miles starting to the northwest at the Dodengang Trenches running southeast to beyond Zonnebeke. Battles raged throughout this area and turned particularly nasty in late fall as a result of exhausted troops, low morale, and muddy conditions, making it near impossible to move artillery up the ridges. Thus, troops faced a powerful, prepared enemy with little artillery support. After a small British advance, German counter-attacks recovered most of the ground lost opposite Passchendaele. In this first effort, reportedly there were 13,000 Allied casualties, including 2,735 New Zealanders, 845 of whom had been killed or lay wounded and stranded in the mud of no-man’s-land. In lives lost in a day, this was the worst day in New Zealand history.

In Mid-October, Haig and his army commanders agreed to halt attacks until the weather improved and roads could carry more artillery and ammunition forward for better fire support. But further attacks continued as British undertook minor operations and the Canadian troops transferred to the Ypres Salient to relieve the embattled Anzac troops. On 30 October, the final assault on Passchendaele began. Battles continued all over the Salient; however, some rainless days in the first week of November enabled the Canadians units to finally capture Passchendaele.

Casualty figures put British casualties at 244,897 with estimated German losses at as many as 400,000. Some historians put the British losses higher. Some of these deaths came from the German’s first use of nerve gas against their enemies.

Like everywhere along the Western Front, cemeteries hold the dead of these battles and memorials honor the fallen and missing. Some crossroads might have four or five signs pointing in the direction of memorials and cemeteries. 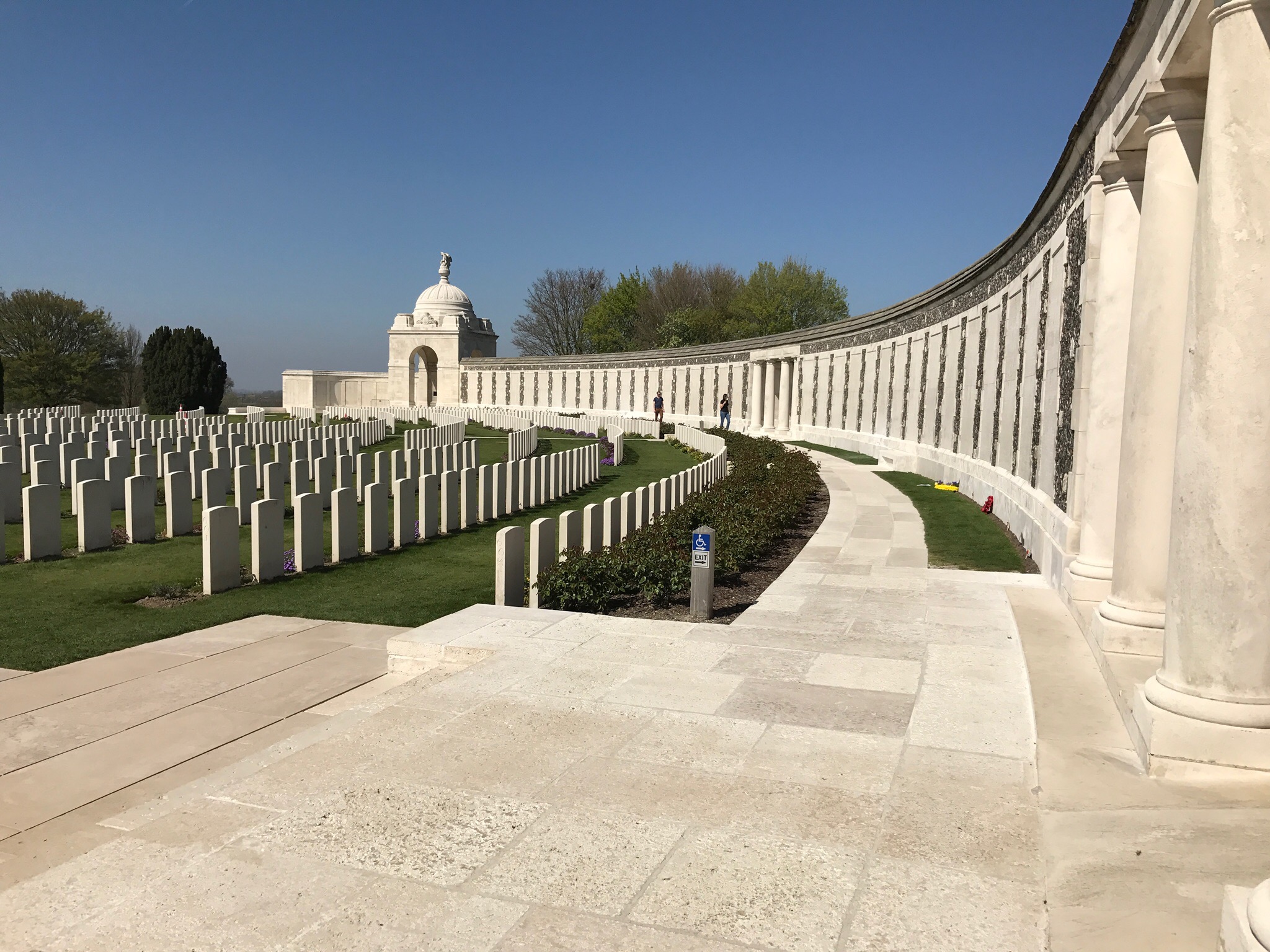 The impressive Tyne Cot Cemetery and Memorial is located just 2 miles north of the Passchendaele Museum. It is the largest Commonwealth cemetery in the world and is the resting place of nearly 12,000 Commonwealth servicemen and more than 8,300 remain unidentified. Four German soldiers are also interred here. Those buried here died from the earliest fighting around Ypres in 1914 to the final weeks of the war on the Western Front. However, the majority of soldiers fell in the Battle of Passchendaele (Third Battle of Ypres) in 1917.

The stone wall memorial surrounding the cemetery makes-up the Tyne Cot Memorial to the Missing, and contains the names of 33,783 soldiers of the UK forces, plus a further 1,176 New Zealanders who have no known grave and whose bodies have never been recovered. Many early graves were lost or destroyed in subsequent battles or remains could not be identified. Nearly all died between mid-August 1917 and the Armistice in November 1918.

The cemetery and memorial with sculptures was created to supplement the large Menin Gate in Ieper, which had insufficient space to record all the names of all the missing of the Flanders’ battlefields. Of the 205,000 Commonwealth serviceman of World War One commemorated in Belgium, more than 100,000 have no known grave.

The German War Cemetery of Langemark is heavy and dark with its granite stones and markers, partially surrounded with a moat. Upon entering the cemetery, an audio guide recounts the story of one soldier who assisted in developing nerve gas, later used by the Germans for the first time here at the Battle of Passchendaele. Involved in one such release of nerve gas, the soldier graphically recounts the total absence of life after an attack.

I drive the cemeteries of the Salient, following the Battle lines from the Dodengang Trenches arching gently to the southeast: Langemark German War Cemetery, the Brooding Soldier Memorial to the Canadians, Dochy Farm New British, Tyne Cot, Buttes New British (NZ), Polygon Wood where it is possible to walk the restored woods, Black Watch Corner’s memorial, Hooge Crater Cemetery and its excellent museum recounting the battles, Sanctuary Wood and Hill 62 with view over the salient, Hill 60 left much as it was when the Canadians gained it, and the Ypres Town Extension. There are cemeteries scattered throughout this relative small area and the sight of each cemetery, row on row of stones, large memorial reading “Their Name Liveth For Evermore” brings home the tragedy of this war.

The Ypres Ramparts Cemetery is just behind my hotel. From there, I can walk the ramparts of the city, along the Ieperlee (Ypres-IJzer Canal) to the Menin Gate. Erected in downtown Ieper, the immense gate was constructed to hold a list of 55,000 names of soldiers from the Commonwealth whose final resting place is unknown. The gate commemorates all those of the nations of the Commonwealth, (with the exception of New Zealand) who died in the Ypres Salient and have no known grave. In the case of the United Kingdom only casualties before 16 August 1917 are commemorated on the memorial. United Kingdom and New Zealand servicemen who died after that date are named on the Tyne Cot Memorial to the Missing.

Last Post is the bugle call that signifies the end of the day. It is often sounded at military funerals and commemorative services to indicate a soldier has gone to his final rest. At Menin Gate, each evening, Last Post ceremonies are held at 8 p.m. Don’t miss it.

This evening, a dozen and more bagpipers proudly marched through the Menin Gate to the beautiful tune of “Scotland the Brave.” Three buglers then blew the “Last Post” followed by two minutes of silence. Poppy wreaths were placed at the memorial. The crowd remained quiet, solemn.

A traditional salute was read. Four lines of the fourth stanza from the poem “For the Fallen” by Robert Laurence Binyon have been adopted by the Royal British Legion as an address at ceremonies of Remembrance to commemorate fallen servicemen and women. 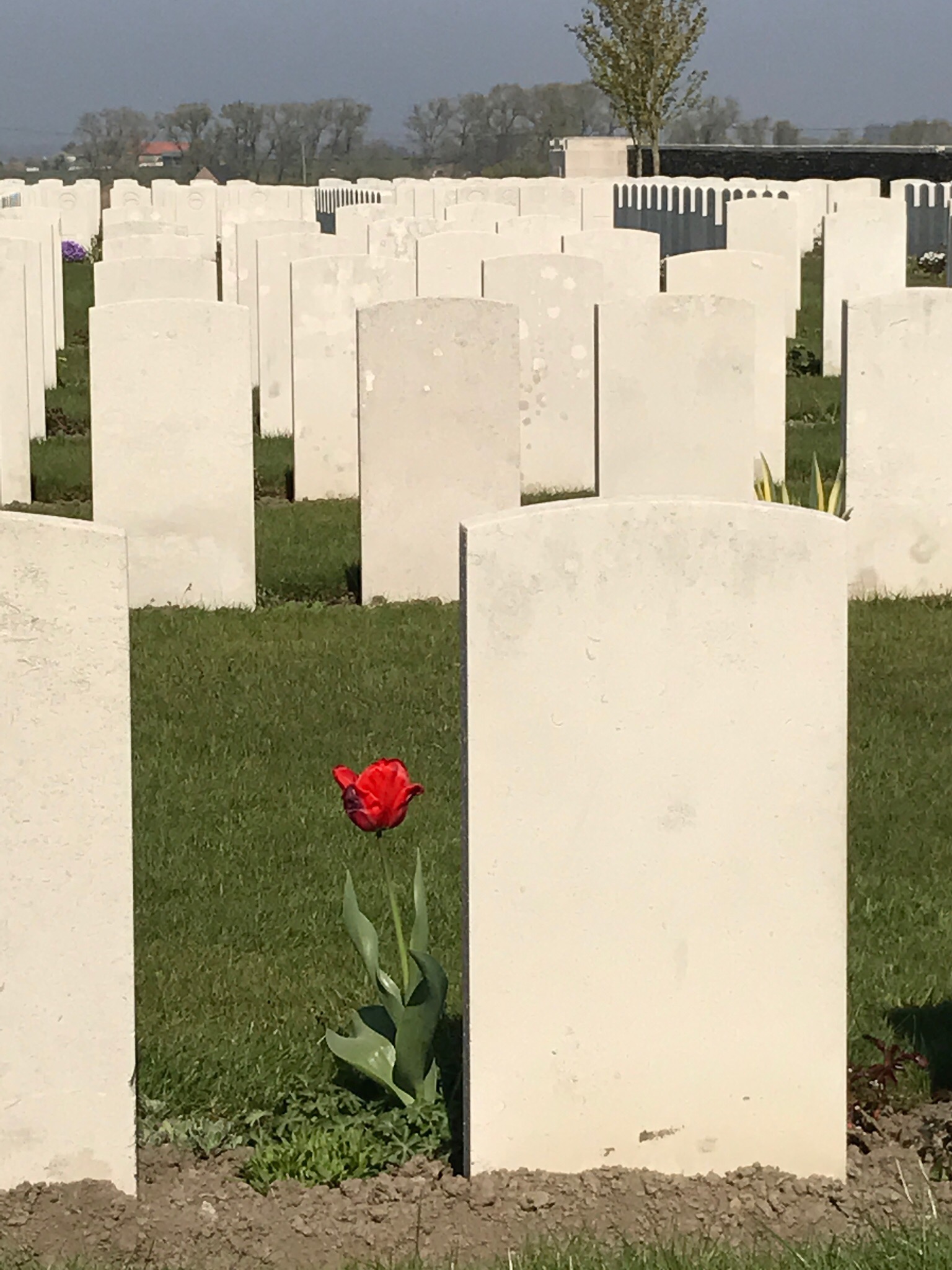 The buglers once again blew Last Post followed by the bagpipers who marched their way back to barracks to the tune of “The Green Hills of Tyrol – The Battle is O’er.”

“They shall grow not old, as we that are left grow old:
Age shall not weary them, nor the years condemn.
At the going down of the sun and in the morning
We will remember them.”

“We will remember them.”