The Somme – Fighting The Great War 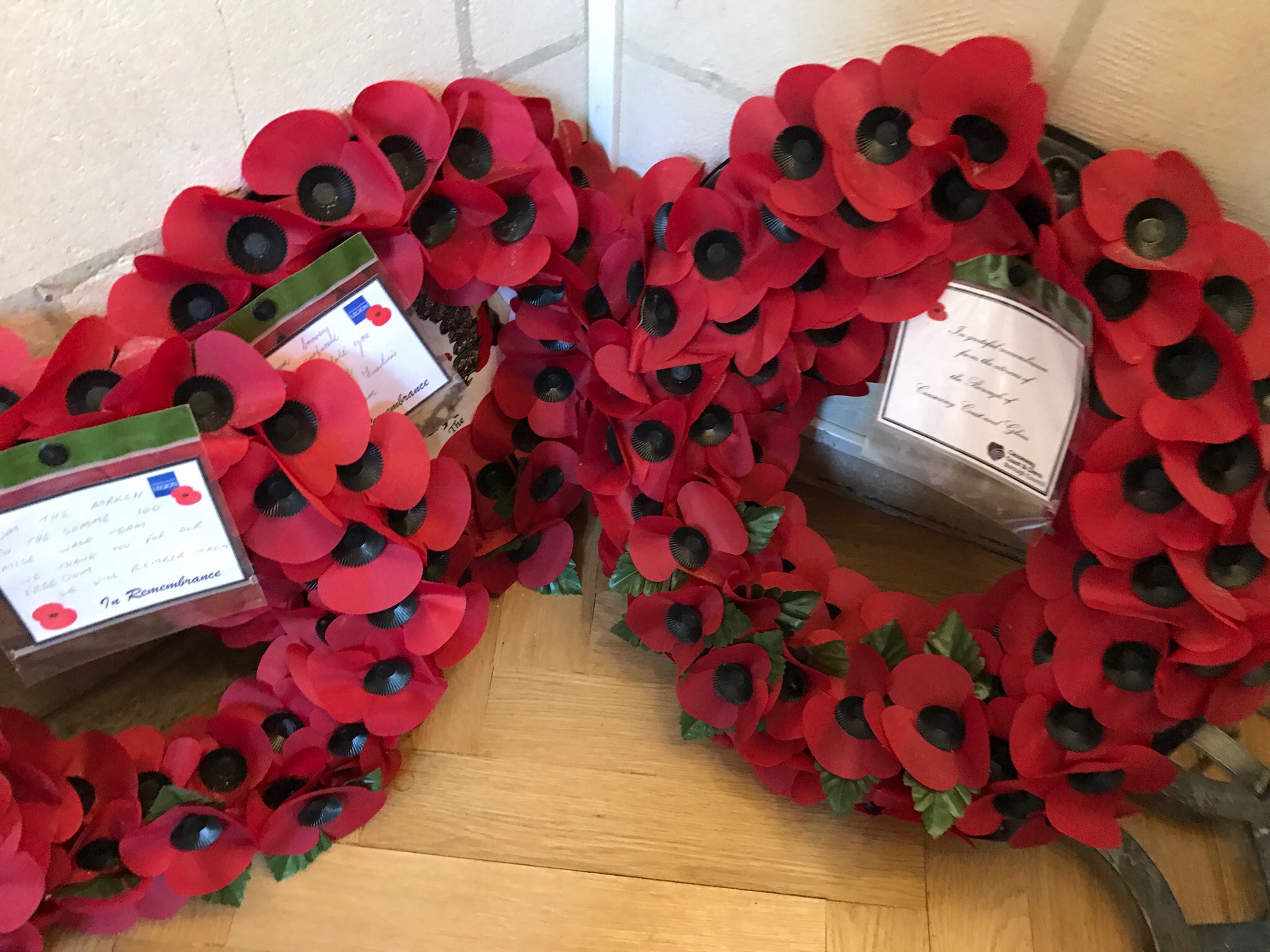 It would be hard to choose the most brutal war, the most dehumanizing war, the most wasteful war. Perhaps Belgium should have the right to declare it. The Great War, World War Two, the Napoleonic wars, were savagely acted out on its flat, soggy soil. The farmland over which I watch the dairy cows graze, the white cherry trees blossom, and the plethora of flowers bloom is known as the Battleground of Europe. This idyll is deceiving.

“In Flanders fields the poppies blow
Between the crosses, row on row
That mark our place; and in the sky
The larks, still bravely singing, fly”


Every town and village has a monument. Enter a battlefield area, a killing zone, you will find cemetery after cemetery: here the Commonwealth, there a Canadian, around the corner graves of Australians, two miles on silent stones bear witness to the slaughter of Germans, South Africans, Americans, New Zealanders who came here from Gallipoli, Czechoslovakians, Polish, and Belgian. “The War to end all wars” ultimately would involve five continents and thirty-two countries, each loosing thousands of lives. “In Flanders fields the poppies blow Between the crosses, row on row….” 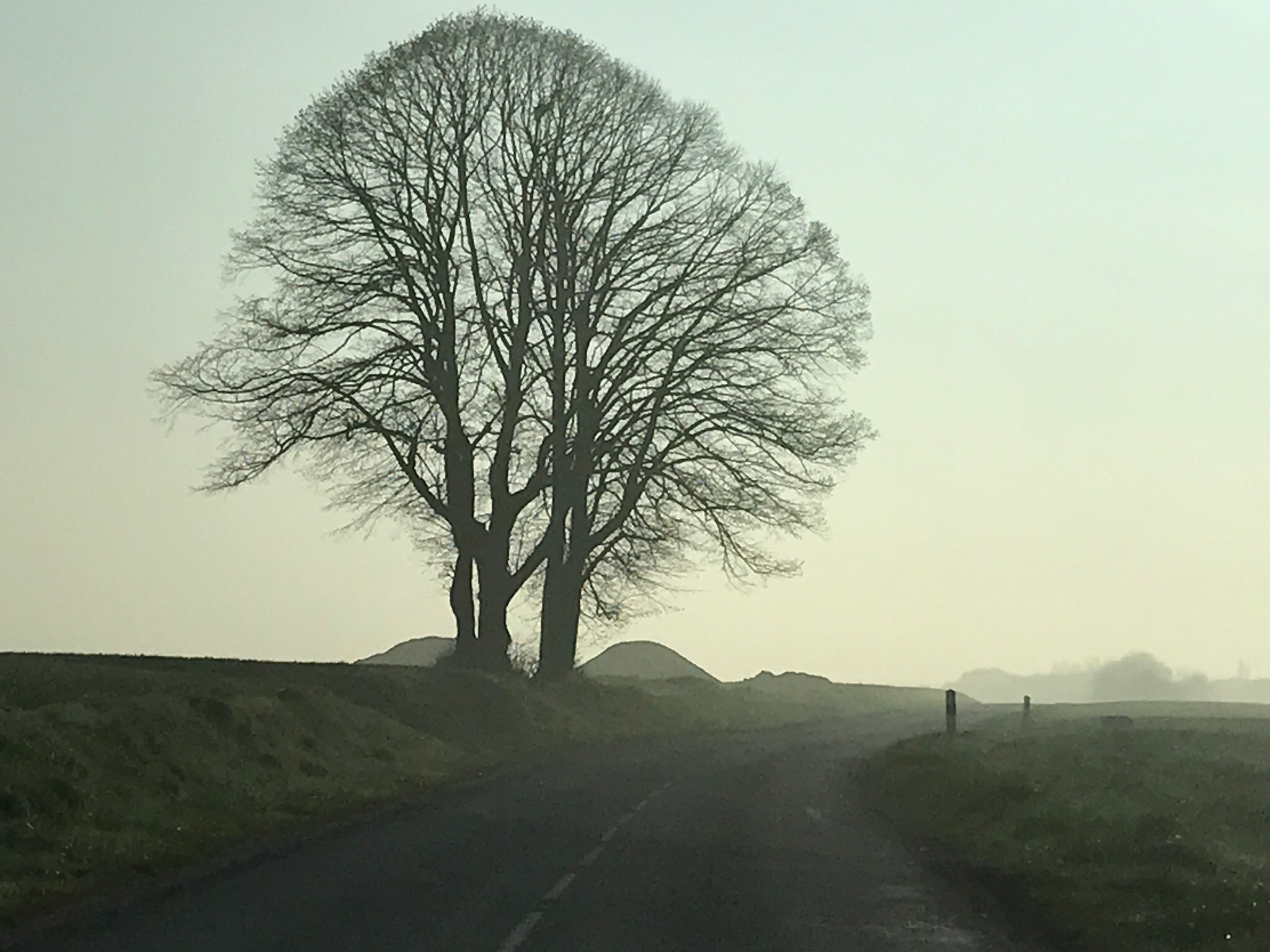 What is easily seen over every rise, decorating every horizon, are the church spires. They must have made for excellent artillery targets. The early morning Meuse fog drifts among the trees, obscuring the forests and fields. The narrow country lanes are dotted with stone farmhouses; the cows, sheep and horses graze in lush green fields. But if I look closely, I can see bullet holes in the stone facades, occasional ruins of a shell shot building, testaments to what happened here a century ago.

It’s hard to imagine this tranquility was blown to Hell for four years. Yet, it must be imagined. In 1916, all was mud, wet, cold, constant danger, exhaustion and fear.

After the German confrontations of 1915 and before those of 1917, the offensive tactics of Verdun became a battle of attrition. The Somme was a full frontal assault.

From Verdun to Lille, I drive through villages laid waste by armies: Romagna-sous-Montfaucon, Saint-Quentin, Pèronne, Albert, Beaumont-Hamel, Vimy, Arras, Lille. The Western Front remained static in this region of France for the better part of the entire four years of the war. Villages would bounce back and forth between Allied and German control. The Germans managed to capture 50 villages with enormous casualties only to loose and recapture them all over again. More lives lost.

“We are not men anymore just bloody beasts.”  Edward Davies

The short distance of the Front from Pèronne to Vimy Ridge, just 35 miles, saw the bloodiest battles of the war. This is the heart of the Somme. At every crossroads a sign directs me to a memorial, a museum, a cemetery. Each site explain Battlefield events. However, the best presentation is in Albert at the Musée Somme 1916. 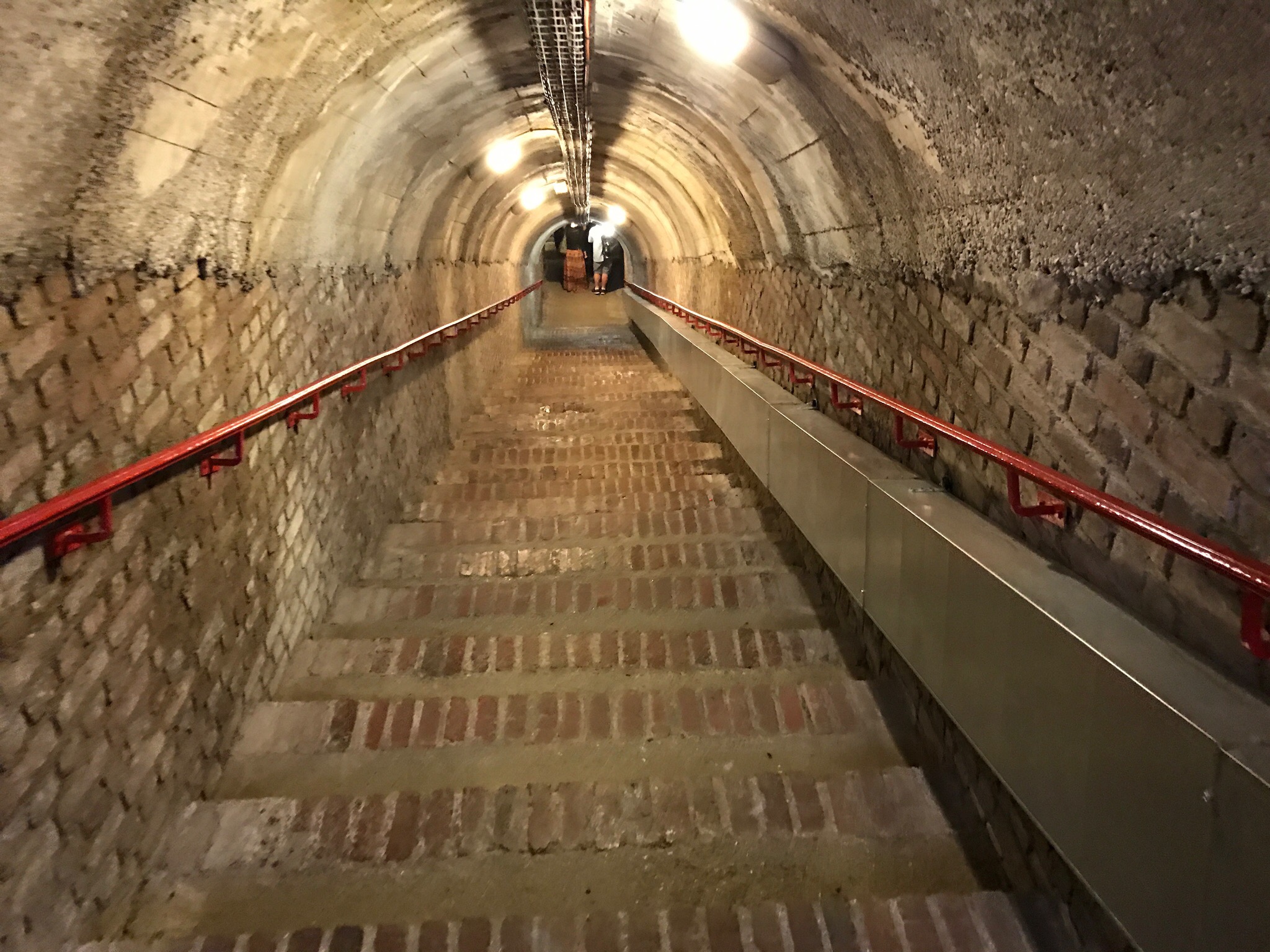 Descending 30′ underground into tunnels and fortifications, museum displays and audio visuals, rooms of memorabilia and weaponry bring this horrific and catastrophic battle to life; “The Big Push” as it was called. All told, about 2.5 million soldiers of the British Empire fought at the Somme. The battle started 1 July 1916, becoming the bloodiest day of battle in the history of Britain when 19,240 men were killed and 35,493 wounded. Four and a half months later, the statistics were 1.2 million killed, wounded or missing. French casualties were 50,000 killed and more than 180,000 dead, wounded, or missing. All for less than a 10 mile advance! Two lines of trenches separated by a no man’s land.

The tank made its first appearance on the Battlefield in September. Warfare was adapting and modernizing. New, more effective guns and shells were used to kill more enemy faster and more accurately. Deadly gas was used by both sides. The mud got deeper and the winter colder.

Out of war comes art

No wonder the museum makes special note of the fact that the birds and the frogs, once blasted to oblivion along with everything else, have returned to Belgian. The beautiful Belgian horses are in the fields and the forest regrown. Houses and villages have been rebuilt, farmland restored. The people here have reconciled their lives with these historic sites and are reminded daily of the death and destruction of The Great War. And they honor those who fought and gave their lives to liberate their villages.

I visit cemetery after cemetery. They are becoming recognizable by their distinctive markers. German cemeteries have less decoration, dark granite stones, a stark design. Some of the cemeteries have buried soldiers from both world wars. All are lovingly maintained, spotless, and beautiful. Each honor the many who have fallen in war:

Bellicourt British Cemetery; Fricourt German Military Cemetery where the Red Baron Manfred von Richthofen was once interred, and there is the occasional stone of a Jewish soldier; the London Cemetery Extension; Peronne Road Cemetery; Caterpiller Cemetery with its 5569 soldiers of the Commonwealth and and names of the 1205 New Zealand soldiers whose graves are unknown.

Then there is the Delville Wood Cemetery and South African Memorial. Thirty-two hundred men entered the wood but just 143 survived the withering German artillery. Buried here are 5500 servicemen, 3500 of whom remain unknown. Then a dense forest, just one tree remained standing after the battle.

“Soldat Polonais Inconnu”  –  “Morts Pour La France”  –  Unbeikannter Deutscher Soldat” – Sadly, regardless of language, in every cemetery there are large numbers of markers for “A Soldier of the Great War” and “Known but to God.”

Thiepval Memorial and its nearby Museum honors the names of the 50,000 men lost to Great Britain in three months fighting in the Somme. The 36th Ulster Division lost 5,500 of their men in just a few hours, a quarter of their strength.

Within Cabaret Rouge Cemetery rests 7,600 soldiers, of these are 740 Canadians who died at nearby Vimy Ridge. There are hundreds of Canadians touring the battlefields and cemeteries, many wearing red, leaving flags, poppies, and letters of appreciation. Red jackets with “Vimy 100 1917-2017” are seen everywhere.

At Beaumont Hamel, Newfoundlanders, after a pummeling in Gallipoli, came to the Western Front to find themselves isolated and under fire here in this no man’s land. Within 20 minutes of leaving their trenches, they suffered the loss of 85% of their soldiers to German artillery.

It is quiet and I am alone in many of these places. The birds sing in the trees; flags, flowers, poppies, memorabilia decorate the headstones. I am struck by the common dates of death, men dying together in some horrific battle. Thousands killed within months of each other. Their ages reflect the youth of their country, the majority 20-24 years old. Some graves shared by five and six men who fought together, died together.

Other sites in what became known as the “devastated region” include:

Lochnagar Crater was a gigantic BOOM! In preparation for the start of the Battle of the Somme, British tunnelers dug under German field fortifications, planted explosives, and set them off at 7:28 a.m. on the first morning of battle. Lochnagar was one of 19 mines placed beneath the German lines. Dirt and rock were thrown 40′ into the air, leaving a hole almost 100′ deep and 330′ wide.

Pèronne War Museum is in an old fortification in the center of the city and does an excellent job of describing the Battle of the Somme in local terms. Through artifacts, newspapers, propaganda posters, videos, uniforms, and war memorabilia, the museum tells the story of its part in the war. I am reminded that locals find artifacts in their fields to this day.

Ulster Tower is Northern Ireland’s national war memorial. It was one of the first Memorials to be erected on the Western Front and commemorates the men of the 36th Ulster Division and others from Ulster who served in the First World War. The 36th attacked the nearby German trenches and suffered heavy losses crossing 400 yards of no man’s land. Yet, they kept on going. The casualties suffered on 1 July totalled 5,500. Five men were awarded the Victoria Cross. While at the tower, I was honored to witness a group of Irish lads placing the ubiquitous poppy wreath at the tower in memory of those from Ulster.

No finer way I could end my day than at Notre Dame de Lorette. Also known as Ablain Saint Nazaire French Cemetery, it is the world’s largest French military cemetery. It is also the name of the ridge where it sits, and of the basilica which sits at the high point on the ridge. Which is why this ground was so desirable, for it dominates the flat countryside and also faces the equally high Vimy Ridge, held by the Germans. This land was bitterly contested in a series of long and bloody engagements between French and German armies and was the focal point of several battles, battles as costly in human lives as that of Verdun. Notre Dame de Lorette became a national necropolis, sacred ground containing the graves of French and Colonial Dead as well as a tall ossuary, containing the bones of those whose names are unknown. In total, the cemetery and ossuary hold the remains of more than 40,000 soldiers, as well as the ashes of many concentration camp victims. 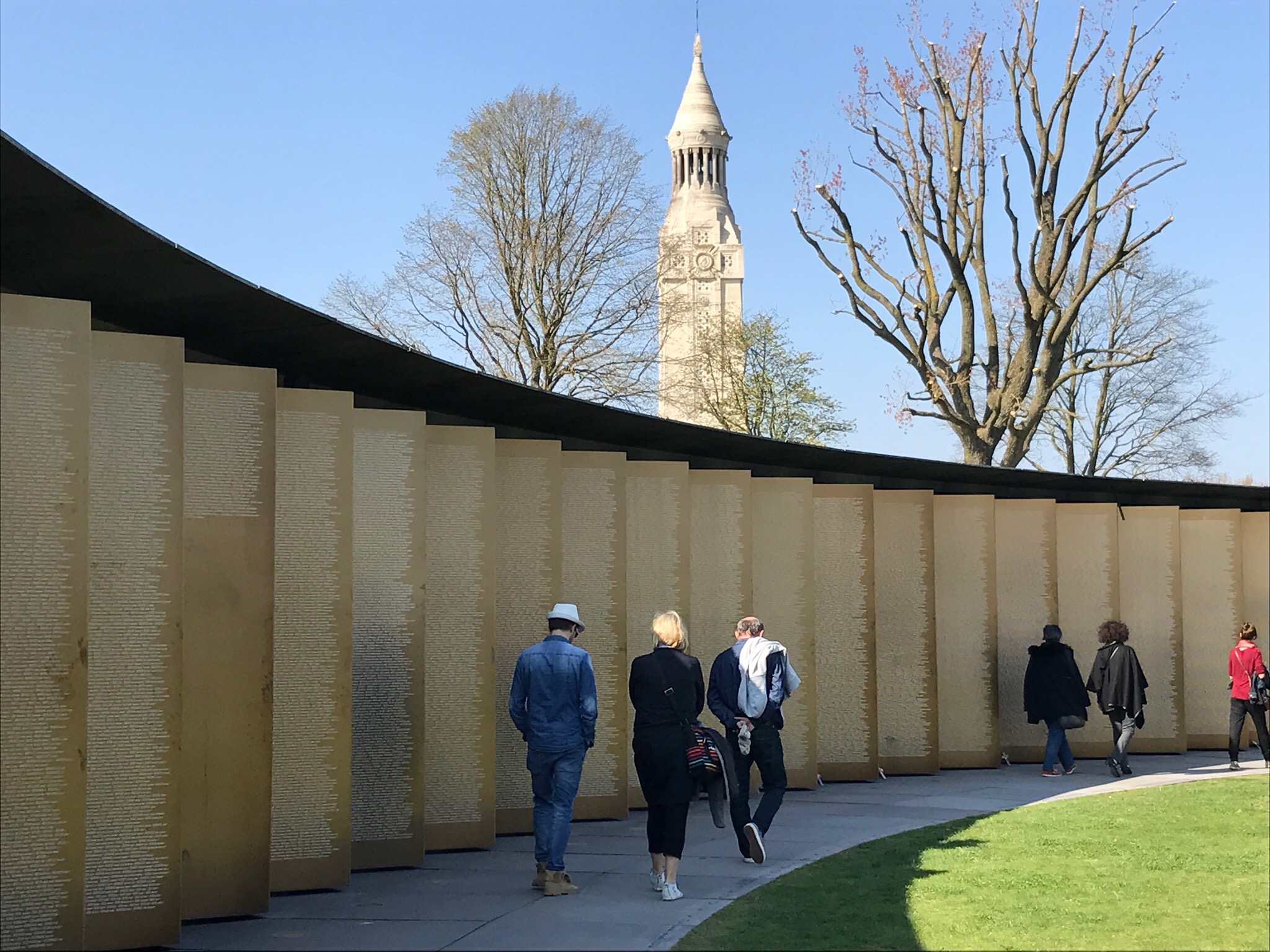 But perhaps most moving is the memorial wall containing the names of 580,000 soldiers killed between 1914 and 1918. The names are in alphabetical order and engraved upon golden metal plaques some 10′ tall. Walking the circuit of this memorial, I get a sense of the magnitude of the 294,000 soldiers of the British Empire, 174,000 Germans, 106,000 French, 2,300 Belgians, 2,300 Portuguese, and others who died. Yet, it does not include the names of the missing soldiers which number in the tens of thousands.

“This memorial was erected in a peaceful Europe in memory of a terrible tragedy which devastated a generation of young men, who for the most part could read and write.”

I watch as elderly veterans, their beret wore proudly, stand around the steps of the chapel, sharing what I imagine to be war stories. A couple of period Model-Ts rattle their way down the drive.

In 1936, bi-planes flew over the Vimy memorial during its opening ceremony. Today, retired Canadian military pilots, in replica Nieuport XI World War One scout aircraft, replicate this event for the 100th anniversary ceremony scheduled for 9 April 2017. Flying a circuit over Notre Dame de Lorette and the Vimy memorial, they honour those who fought in that conflict.

Overhead the roar of engines disturbs the quiet of this sacred land. Five Nieuport biplanes fly in formation over the site, tipping their wings to the fallen. Reminding all to never forget the sacrifice made by these men.