Gondar and the Timkat Festival- Celebrating the Tabots

We drive this amazing countryside north from Bahir Dar around Lake Tana. The road wends its way up, as high as 7500 feet as we slowly travel to the medieval city of Gondar. Nothing earthbound goes quickly along these roads.

Gondar was the first capital of the Ethiopian Empire, founded in 1632 during the reign of Fasilidas (1632-1667), descendent of the House of Solomon. Fasilides expelled the Portuguese and missionaries and moved his capital to Gondar, building a great castle/palace and seven churches. There was a superstition that the capital’s name should begin with the Amharic letter ‘G’ so it became Gondar. Tradition also says that a buffalo led Emperor Fasilides to a pool where, an old hermit told him, he should build his capital. Fasilides had the pool filled in and built his castle on that same site. Not sure where he relocated the then homeless hermit. 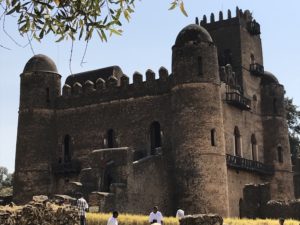 Royal Enclosure of the “Camelot of Africa”

The five kings and one queen who followed him also built their palaces in Gondar, always hoping to outdo the last guy. Thus, Gondar holds many royal castles built by various emperors over the course of 236 years, including those in the Royal Enclosure for which Gondar has been called the “Camelot of Africa.” The enclosure is walled and dotted with 12 towers (one for each of the apostles), not for defense but privacy. I can see the Portuguese, Indian, and Muslim influence in the architecture, crenelated roofs and rounded windows. I also see a “lion’s den” where Ethiopia’s King David may have walked among his beasts. Christo de Gama slept here, not in the cages but the palace.

This royal compound of Fasil Ghebbi, or Royal Enclosure, is a city within a city and the site from which the emperor ruled. The 753,473 sq. ft. castle consists of Fasilidasi Palace, halls and stables, library and churches. The UNESCO site continues to be a very impressive fortress.

Gonder spreads across a series of hills and valleys more than 7,000 ft above sea level and perhaps feels slightly “European,” a legacy of Italy’s occupation in the 1930s. Gondar was developed during the Italian occupation, and here the Italian forces made their last stand in late 1941, six months after the British took Addis Ababa. 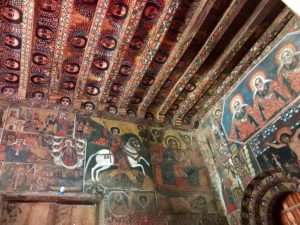 Debre Birhan Selassie (Trinity and Mountain of Light) Church was built by an Emperor and “preserved by an archangel” and is the most decorated and respected Ethiopian Orthodox church in Gondar. Though Muslims destroyed the first church, soil was brought here to incorporate into this newer church sponsored by the son or Haile Selassie. The paintings depicting stories of the Bible are wonderfully well preserved. The wood beam ceiling is decorated with countless faces of angels looking down from above.

TIMKAT – re-enacting the baptism of Jesus in the River Jordan

But the principle reason we visit on the 19th of January (Ter 10 in the Ethiopian calendar) is because of the Timkat Festival (celebrated on the 20th in Leap Years). Timkat, or Epiphany, is the most colorful and deeply religious festival in Ethiopia. It is immense, joyous and unforgettable. The place of honor and adoration is held by the Tabot.

They shall make an ark of acacia wood,” God commanded Moses in the Book of Exodus. And so the Israelites built an ark, or chest, gilding it inside and out. And into this chest Moses placed stone tablets inscribed with the Ten Commandments….

Movies depict the Ark blazing with fire and light…stopping rivers, blasting whole armies (AKA Spielberg’s Raiders of the Lost Ark), but supposedly King Solomon built the First Temple in Jerusalem to house the ark, venerated there at least beyond 930 B.C. Then it vanished.

Why do the Ethiopians lay claim to possessing the Ark of the Covenant?

Ethiopian Christians claim the ark rests in a chapel in the small town of Aksum. It arrived nearly 3,000 years ago, they say, and has been guarded by a succession of virgin monks who, once anointed, are forbidden to set foot outside the chapel grounds until they die. And no one is allowed to glimpse the sacred ark.

Queen Sheba visited King Solomon in Jerusalem three thousand years ago, and the son she bore him, Menelik, visited Jerusalem, from where he brought the ark of the covenant back to Aksum. It’s been in Ethiopia ever since.

Ethiopia’s Kebre Nagast (Book of Kings), chronicles the royal line. The Queen of Sheba, one of its first rulers, traveled to Jerusalem in search of King Solomon’s wisdom. On her way home, she bore Solomon’s son, Menelik. Later 20 year-old Menelik went to visit his father, and on his return journey was accompanied by the firstborn sons of some Israelite nobles who, unbeknown to Menelik, stole the ark and carried it with them to Ethiopia (across the Red Sea). When Menelik learned of the theft, he figured that since the ark’s frightful powers hadn’t destroyed his retinue already, it must be God’s will that it remain with him.

But is it the true ark? The Bible describes the ark as about 4 ft. long, just over two ft. high and wide, with two winged cherubs facing each other atop its lid. There is no proof as few are allowed to see it, and even the head of the Ethiopian church is forbidden to lay eyes on the relic, “The guardian of the ark is the only person on earth who has that peerless honor.”

Any evidence that the ark came to Ethiopia with Menelik? “These stories were handed down through the generations by our church leaders, and we believe them to be historical facts.”

Or is the story of the Ark just convenient? Many historians including Ethiopian scholar Richard Pankhurst, date Ethiopia’s chronicle to the 14th century. They say it was written to validate the claim by Menelik’s descendants (including Haile Selassie) that their right to rule was God-given, based on an unbroken succession from Solomon and the Queen of Sheba. This lineage was so important it was written into Selassie’s two imperial constitutions.

And where does that leave us? At a very colorful and impressive celebration by the faithful. 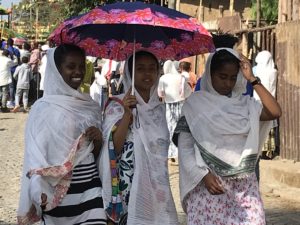 Celebrations start on Timkat’s eve when each bishop emerges from his church into a crowd of thousands. Priests, deacons and acolytes, clad in robes of white, ivory, and gold, form a circle around the bearded priest wearing a scarlet robe and a golden turban. The embroidery and colors are magnificent. On the bishop’s head is the Tabot, wrapped in rich cloth embroidered in gold. The Tabot, which is rarely seen by the laity, represents the manifestation of Jesus as the Messiah when he came to the Jordan for baptism. A carpet is laid and relaid in the path of the priest; his feet never touch the ground. Umbrellas of bright colors are held aloft, sheltering them from the sun. Brightly embroidered white gowns are worn by the faithful. Tabots from all area churches are paraded with pomp, jubilant dancing and singing in a very slow procession following a route to ultimately meet at a water source.

I am watching from a rise adjacent to the procession and across from the Fasilides Baths. Clerics approach from at least three directions carrying their altar’s Tabots. Together they lead thousands in colorful pageantry into the Fasilides baths where many will spend a cold night awaiting dawn and the beginning of Timkat ceremonies. All evening and through the night, priests, surrounded by the faithful, chant hymns before the Tabots. The Devine Liturgy will be celebrated early in the morning (around 3 a.m.) with mass continuing thru dawn. 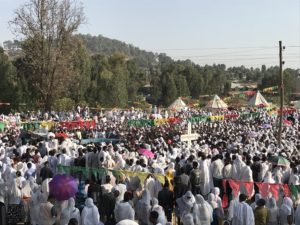 For Timkat, we travel to a more distant neighborhood to observe the ceremonies. It’s dawn and the archbishop seems to talk forever while hundreds of people gather. The crowd grows exponentially by the minute. Witnessing the gathering, I think of the scene from “Close Encounters of the Third Kind” where masses of people gather to chant and watch the skies. The scene is a sea of white, the voice of the archbishop answered by the chants of the crowd. It goes on well past sunrise. Then, dramatically, hundreds of brown faces turn towards the pool. Men are bareheaded, women are in back with head covered and wrapped in white. The moment has arrived.

Celebrating the renewal of baptism

A path is opened for the priests as they make their way to the pool of water, surrounded by thousands. Circling the pool three times, they bless the water. Bishops and clerics celebrate the baptism of Jesus by splashing one another with the pool’s water. Once these holy men and their precious Tabots remove themselves, pandemonium seems to break out. Men atop the pool dip buckets, bottles and makeshift containers into the blessed water and throw it onto the waiting people thus recreating the baptism of their savior at the River Jordan. It seems the wetter the person, the happier they are. Great sheets of water are thrown over the faithful in blessings. Thousands symbolically renew their baptismal vows.

Yet the day is not done. People will slowly journey home for the feast of the day and towards afternoon, the procession will repeat itself but in reverse. The faithful will jump and shout, sing and chant, celebrate and rejoice as they surround their bishop as he and his precious cargo return to the church.

At the huge Fasilides Baths downtown (built by the king because he liked to swim), it has been the scene of an even bigger celebration. The large pool took a month to fill, was blessed after dawn, then used by thousands for Timkat, the only time they are allowed inside the pool. Children especially love this occasion as they climb the overhanging trees and, at the proper moment following the blessing, plunge into the water. The water is muddy brown and totally enjoyed by the participants. 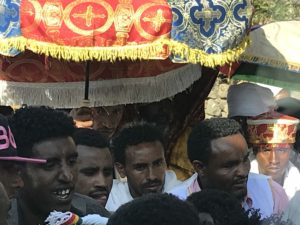 On our three hour drive north to the Simien Mountains, we pass through numerous small villages. Each is celebrating its own Timkat. The road is filled with revelry, rejoicing the procession of the Tabot back to its church. A few revelers seem to have reveled too much today with the local spirits. A monk comes by with his inverted umbrella asking for donations. Streets are impassable but for the military who clear a path for the bus. The jubilation has been going since yesterday. We pass within feet of numerous priests with the Tabot upon their heads. They seem as curious as we.

We leave the celebrations, horns, drums, singing and dancing behind as we ascend into the quiet of the Simien Mountain National Park. It will be a peaceful respite.