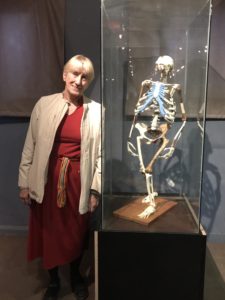 Addis brags of its top museums highlighting Ethiopian history and culture, both ancient and modern. Today, I visit two of these museums and look forward to meeting Lucy and her friends.

Ethnology is the study of the cultures and characteristics of different peoples and the relationships between them. That is what I expect of the Ethnological Museum on the grounds of Addis Ababa University. It is located in the former palace of Haile Selassie. He ruled from here until after 1961 when he moved to a new palace. It is on these front steps that the assassination attempt was made on Marshall Graziani, leading to the indiscriminate murder of countless citizens as a “lesson” following the failed attempt.

The interior is simple. A library can be seen across the hall in which one wall is lined with the wooden display cases I associate with old, stuffy Victorian libraries. Entering is strictly forbidden but I am told it houses a growing collection for researching Ethiopian history. The museum itself is on two floors which can be seen in a short time. 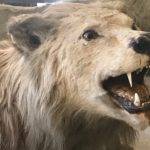 One flight up are the bedrooms and living quarters of Halie Selassie and his wife Empress Menen. First, we are shown the stuffed remains of Selassie’s pet lion, Gillo. Given to him as a gift when a young cub, the lion became quite the pet, accompanying the Lion of Judah on many occasions.

Selassie’s bedroom contains his bed and a small working desk. This was not his official office but his desk and large wall safe made for convenience. Another small room, probably originally a dressing room, displays uniforms, cape, medals, and gifts received during state visits. Behind this room is Selassie’s large marble and blue porcelain bathroom.

On the other side of the lion foyer are the rooms of Empress Menen. Not much is included beyond a dress and portrait. Her marble and pink porcelain bathroom and dressing area is also open.

Upstairs is a dimly lit collection of religious iconography and paintings. There are a few dimly lit rooms displaying ethnic musical instruments, including drums and primitive stringed instruments. These rooms have so little light it is impossible to read any placards, what few there are. There is also a small section of brightly woven cloth, stamps, coins, and royal umbrella’s that belonged to Emperor Menelik.

There are 9 states in Ethiopia that include 85 tribal ethnicities and four languages. It is a diverse country trying to unite its 80-100 million people (without official censuses numbers are uncertain). I would like more explanation as to how they culturally differ. I have read about the rivalries that existed among the many different cultures. I will be meeting some of these tribes later. So it would be especially interesting to read about them here. Unfortunately, little is gained from this museum. 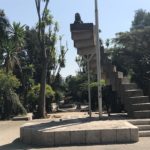 Outside the museum are stelae excavated from Tiya, about 30 miles south of Addis. There is also a rather odd freestanding concrete stairway leading up to a small lion. I am told the 14 steps symbolize the years of Mussolini’s rule. The where, what and why of its purpose remains a mystery to me.

In the roundabout by the entrance to the university is the Yekatit 12 Monument, a modern stela with two bands of bronze murals. It commemorates the date in the Ethiopian calendar equivalent to February 19, which is the date of the 1937 indiscriminate massacre, known as the Addis Ababa Massacre, and the imprisonment of Ethiopians by the Italian occupation forces following the attempted assassination of Marshal Rodolfo Graziani on the steps of the former palace. Estimates vary as to numbers killed in the three days of unbridled violence but some suggest as many as 30,000, including priests and several hundred monks. Otherwise known as the “Butcher of Fezzen,” after the war Graziani was acquitted of “crimes against humanity” and recently honored with his own monument in his home town in Italy. 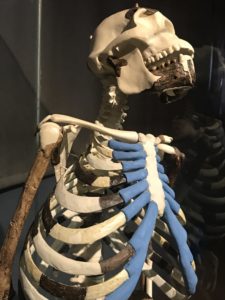 The National Museum houses artifacts and exhibits from across Ethiopia and is advertised as one of the best sub-Saharan museums in all of Africa. I believe that is because most people know this museum for its world famous paleontology exhibits. Like those who ignore priceless art in their rush to the Sistine Chapel, or pass beautiful statues as they hurry to stare at David in the Accademia, we rush to meet Lucy. But I soon learn that Lucy has friends.

Like the rush to see the Mona Lisa and then the general disappointment that it is not so big and impressive, I get much the same feel standing before Lucy. It is hard to imagine these few bones could make such an impact on society. Here is the DNA connection we share in common with early humanoids.

In the well-organized and well lit basement are the fascinating remains of the fossilized humanoid, Lucy. Ethiopians call her Dinknesh meaning “You are Wonderful,” but the world knows her as Lucy, named after the Beatles’ song, Lucy In The Sky With Diamonds. She was discovered in 1974 in the Afar Region of the Rift Valley in Eastern Ethiopia.

Lucy is supriseingly petite at 41 inches. Evidence, such as a wider pelvis, supports the theory that she is a bipedal female and walked upright. She lived in the Near Hadar some 3.2 million years ago. Lucy may have been skilled at climbing trees, assisted by rather long arms. She also has a long and protruding face. Lucy may be small but her impact was felt around the world and she and her cousin Ardi represent the most complete skeletons of adult hominids ever found.

Ardi was both taller and heavier than Lucy. She lived about 4.4 million years ago and was also found in the Afar Region of Eastern Ethiopia in 1994. Ardi is also believed to be a female of about 47″ and over 100 lbs., about the size of a female chimpanzee. Ardi combined bipedal walking with tree climbing. It is thought that Ardi was a quadruped who spent most of her life in trees.

Another younger cousin found in the year 2000 in the Afar Region is Selam. Selam means “Peace.” She lived some 3.3 million years ago, dying about 150,000 years before Lucy. Selam represents the most complete skeleton of our human ancestor ever found. She was about three years old when she died.

The remaining skulls, bones, and displays explain the work that paleontologists have achieved in discovering the origins and development of early man. Lucy’s relatives eventually migrated down the Nile and crossed over into the Levant perhaps 100,000 years after her death. My ancestors will branch off from Lucy’s ancestors to continue their migration north.

There are many excellent exhibits besides Lucy at the National Museum. The museum is filled with a good collection of artifacts, memorabilia from the royal families, more church iconography, historical photos, wonderful pottery, and art. Most are well lit and explained.

Really want to learn about Ethiopia so these museums and monuments are more significant as you visit? There are lots of guide books but I prefer to read well researched and documented histories and biographies. There are several books that offer insight into this amazing country and its people:

To get one’s blood pressure up but offering a glimpse into how early explorers and travelers saw Ethiopia, I read The Sea Gypsy by British explorers Salisbury and Cooper published in 1924. It displayed the typical British superiority complex of the era. They always seemed to know what was best for the indigenous locals. This book and others of its era are very politically incorrect but do give a glimpse into the mind-set during the colonial times and beyond.

James Baum’s 1935 Unknown Ethiopia: A New Light on Darkest Abyssinia ran a good second for interesting and offensive.  Baum traveled to Ethiopia and shot a few, around 20,000, specimens of animals to take back to the Field Museum in Chicago, including rare mammals, ibex, and birds found in no other country. I loved Field Museum as a child but I will not look at animal dioramas the same.

Faced with such colonial beliefs of the time, no wonder the words about the African “…in their struggle against imperialism, colonialism, neo-colonialism, racism, and all forms of foreign aggression, occupation, domination, interference or hegemony as well as against great power and bloc politics,” was so well received during Fidel Castro’s speech in 1979.

Mockler’s Haile Selassie’s War 1935-1941, published in 1984, is an early treatment of the Italian-Ethiopian war. It is well written and covers the subject well.

Pearce’s Prevail: The Inspiring Story of Ethiopia’s Victory Over Mussolini’s Invasion, 1935-1941, was published in 2014 and is an excellent perspective of the Italian-Ethiopian war. The forward is written by imminent Ethiopian historian Richard Pankhurst. Well documented and enlightening. Pearce goes beyond the basic facts and delves into how pre-war activities, Selassie’s pleas for support, and the League’s subsequent turning of its back to this helpless country. Emperor Selassie’s words ring true to me when Selassie referred to his speech to the League of nations in 1936: “I spoke then both to and for the conscience of the world. My words went unheeded, but history testifies to the accuracy of the warning.”

What Is the What: The Autobiography of Valentino Achak Deng is a 2006 novel written by Dave Eggers. It is based on his life as a Sudanese child refugee who immigrated to the United States under the Lost Boys of Sudan program. Although not Ethiopian, he does spend time in an Ethiopian refugee camp and the book is worth a read in helping one understand this country and its neighbors. And maybe ourselves.

Harder to find are biographies about Haile Selassie himself, including two autobiographies. I continue to search for copies. Selassie renames somewhat of an enigma. Time and history will always be be final judge of a man’s worth. Emperor Selassie is no different.

Outside the kingdom of the Lord there is no nation which is greater than any other. God and history will remember your judgment.  –  Emperor Haile Selassie I

It is much easier to show compassion to animals. They are never wicked. –  Emperor Haile Selassie I