10 things to plan before visiting Ethiopia

“Travel to Ethiopia and be seven years younger” the advertising says.

Actually, with a flight time of 36 hours to reach Addis Ababa, I would need these seven years in order to pull my brain together and do anything other than sleep.  Just attempting to figure out what day it is in Ethiopia can be a challenge. I was warned to watch the time as well. Ethiopians use a 12-hour clock which cycles from dawn to dusk and starts over dusk to dawn. Being so close to the Equator, dusk and dawn never vary by much.

Dawn is the start of a new day (our midnight) so 7 am = 1 o’clock. At dusk, Ethiopians start over again, so at 7 p.m. it’s 1:00 once more on their 12-hour clock. Our guide, Sammy, could look at his watch and get this westerner to dinner on time yet know it was just 1 o’clock Ethiopian time. Luckily, I never had to worry about this.

And the travel advertising about being seven years younger? Their calendar is 7 months 7 years different from our Gregorian calendar. The first day of the Ethiopian year is 1 Mäskäräm (11 September) thus making today the 4th of Yekatit, the 6th month of the calendar year 2010.

It may be 2010 to an Ethiopian, but the minute I depart Addis for home, I age a fast seven years. Therefore, not a real selling point for me.

So why am I here? Because Man originated here and Ethiopia is a cradle of ancient culture. I have read about the Great Rift Valley and the Nile River since childhood and both are found in Ethiopia. Ethiopia has 9 designated UNESCO World Heritage Sites. I visit because I have not been to Ethiopia and I always enjoy exploring someplace new and culturally different.

So, what did I find? All the above and more. But, I would be amiss if I did not admit that this was one of the toughest, most challenging trips I have ever taken. An in-depth description of my travels and responses to it can be found in my daily blogs. It is here that I want to discuss some items that anyone planning a visit to Ethiopia should consider. It is a country to see and explore. It is also a country about which one should do a little extra planning and attitude adjustment in order to get the most from their experience.

Let me try to limit this to 10 things to plan before visiting Ethiopia:

ONE – Prepare for rough and challenging roads. I believe the first thing to wear out on Ethiopian cars is the horn. Brakes probably last much longer. You will share the narrow roads with endless streams of donkey carts, livestock, tuk tuks, and pedestrians. Roads are a plethora of pot holes, dips, bumps, gravel, and dirt. Actually, there is a minimum of paved, asphalt road in Ethiopia and I can say this is a good thing. With dirt roads, you travel slower albeit rougher. On the paved “highways” you are facing the same road obstacles, from the dazed goat to the overloaded donkey cart, but at 50 mph. It is a zig-zag route down the highways, honking and swerving around anything standing or crossing the road. It is not in the Ethiopians’ psychology to stop moving forward. Road kill and overturned vehicles increase exponentially the better paved the road. The only exception is the short distance covered by the toll road. But that just gets you into the city of Addis where the traffic is short of suicidal. (What’s the first part to wear out on a donkey cart? The donkey!) Truthfully, I believe the Ethiopian driver’s manual states that to drive defensively, just honk first.

Large buffets but little is hot.

TWO – Food: Of the 15 people on our tour, each said at least once that “you don’t come to Ethiopia for the food.” I believe at least three of us managed to get food poisoning and almost all the rest were sick at one time or another. The problem is twofold: Ethiopians do not know how to cook, and secondly, their lack of reliable electricity hinders the proper storage of food. When it is 95 degrees, it is not a good thing to leave food out on buffets. (Almost every meal was buffet but otherwise service is very slow.) Personally, I felt a lot of animals died in vain as the meat, in general, is not chewable. Ordering meat presents two choices: less tough and more tough. Furthermore, it was rare that food was served hot. Known for their coffee, it was difficult to get a good cup of coffee without waiting for them to perform their 20-minute coffee ritual. Most times it was bitter and only copious amounts of sugar helped. Their beers were good as was their acceptable Rift Valley wine.

THREE – The weather, of course, depends upon when you visit. I was there in January, the dry season. This also meant the air was so hazy the views were limited to a mile or so. And the pollution in Addis and north was horrendous. Many in the group suffered sinus/upper respiratory problems. Most of northern Ethiopia is highland with the Simien Mountains above 10,000 feet. At least the air was clearer and blue sky could be seen. The views across the plateaus were still shrouded in haze and pollution. In the south, elevations were lower but the pollution remained. It will not clear until the first rains in April. Being the dry season, it is DRY. Hot showers and moisturizer helps. The one thing not added to the pollution is cigarette smoke. I saw no Ethiopians smoking, none! Tobacco is considered a cursed plant and it is a sin to smoke. 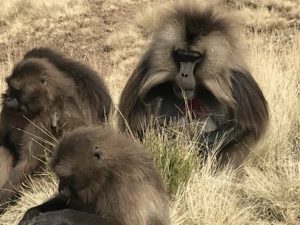 FOUR – You do not go to Ethiopia for the animals. Though the country is recognized for its bird life and some indigenous species, you will see few of these. The problem is most of the national parks where these animals reside are extremely difficult to reach. Roads are not maintained and the money and resources are not there to develop parks for tourism. The exception is the Simien Mountains in the north (the wonderful geladas) and some of the lakes in the south. However, except for a couple hippos, some Swayne’s Hartebeest, and a couple crocks, there was little in the way of animals beyond the thousands of livestock in the roads. Not being a “birder” I appreciated the few I saw, excluding the Marabou Stork which is the ugliest bird on the planet.

FIVE – Toilets are a dream, as are clean rest stops or road stops. There are Bush Toilets which I found quite adequate in the past. However, Ethiopian Bush Toilets are quite without much bush and always hold the possibility of having man and his donkey or several children discovering you within seconds.

SIX – Power outages are constant. While there were always power sources in the rooms, even the tent lodge, a consistency of power cannot be depended upon. A surge protector for electronics is a must. For this reason, I avoided elevators.

SEVEN – There was cellular throughout Ethiopia, although the government owns it. They shut down the data availability via cellular about three months ago and no one knows why. I know that this is the first country I have ever traveled where there is no agreement with outside entities for sharing cellular service so I could receive no data via my AT&T plan. This was too bad as the Wifi in Ethiopia was pretty non-existant. While hotels could say they had free Wifi, download speeds varied between .03 and .49 Mbps on a fair day. Everyone had cell phones and the most isolated village was connected to friends and family.

EIGHT – Expenses are few so not finding any ATM to work at the airport is not a problem. Every hotel has ATM machines out front and the exchange is the same everywhere. Just don’t take out more than $50-100 at any time and hope there is no power outage while your card is being processed.

NINE – Nothing moves fast in Ethiopia. A good cup of coffee is 20 minutes. Getting change for your beer could take the time to drink another beer and more. No one seems to carry much cash. Changing a 100 birr note (about $3.60) could take a security guard and trip to a cash box inside a different building. Get lots of small 5 and 10 birr notes instead. You will need a suitcase for the notes, but at least you won’t have problems with change and paying for photos in the south. Also, distances may not seem much but getting there will be slow. “Service” in general will tax your patience.

TEN – Prepare for security everywhere. Many hotels, restaurants and museums made us go through security upon entry. Prepare for illogical hassles in airports when taking domestic flights. Police with check your passport and VISA at every port of entry: once entering the airport grounds, again at the entry doors, and again inside the airport. You can easily have to strip shoes, belts and coats three times before nearing the boarding gates. Bags are scanned, sometimes within 20 feet of the last scan. Illogically, you can enter carrying a bottle of water. Not a problem. Boarding in International airport was much easier.

ELEVEN – And I guess I have to include an eleventh caution. Be prepared for the kids. Just because they are cute does not soften the effect of constant badgering and begging. I express my final reactions in my blog “Shenkele Wildlife Sanctuary and Hawassa” so will not repeat here. Suffice to say the children are a challenge and as one gets further south, the challenge increases exponentially. 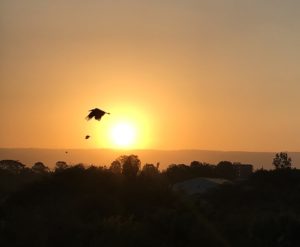 Would I discourage you from visiting Ethiopia? No, not at all. I encourage you to be prepared for an interesting, historic country full of “adventure.” But even the youngest Boy Scout knows to “Be Prepared.”