Willie Nelson is singing in my ear. As so often happens during these marathon travel-fests, “On The Road Again” resonates in my brain like the bass drum at a rock concert. We depart Tbilisi south through somewhat flatter terrain and cross the border at Bagratashen into Armenia. Our farewell to Georgia is very appropriate as we drive through Shulaveri, the well known ‘city of grape seeds’ where some centuries ago the prized 8000 year-old grape seeds were discovered.

The Georgian/Armenian border crossing is uneventful and easy: off our van through Passport, onto our van to drive a few feet. Off our van with luggage for a final goodby, a walk through Passport and customs to board a large Mercedes bus. The Passport guy had lovely eyes and smile and perfect English, offering a “Welcome to Armenia.” 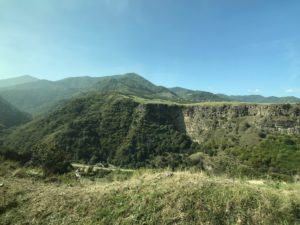 Surprisingly, the landscape appears to immediately change. I am struck by the number of trees. We drive rather poor roads and circumvent several sites of road work to climb into the Lesser Caucasus and what seems endless forests. There is more industry here, much of which was closed when the Soviets departed after 1991. Renovation and rebuilding is occurring everywhere. But, there continues to be glimpses of typical Soviet statues and carvings clinging to somber Soviet architecture. And factories, buildings and homes reflect the plain, utilitarian Soviet heavy concrete style. Thus the need for so much renovation.

We twist and turn our way into the mountains as we follow the southern border of Georgia for several miles before turning southwest to arrive at the medieval Haghpat Monastery (UNESCO). Just over 3,300 ft. elevation, the open plain seems rather wind-swept with the tops of some nearby mountains sheared flat, creating wonderful bright green buttes. The entire area overlooks the Debed River and several small villages. In the distance I can see the smoke stacks from the surrounding copper smelting plants. These promontories were formed by glacial erosion and the rivers have done their admirable share of carving deep gorges over the centuries. Peaks of the surrounding mountains reach a respectable 8,000 feet. 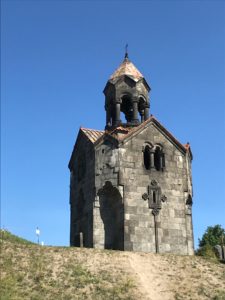 The Haghpat Monastery complex was founded somewhere around 976 AD by Queen Khosrovanuysh, wife of Ashot III, king of the independent state of Bagratid. There are several structures within the complex, including the Cathedral of Surb Nishan, built all of stone with peaked tile dome. Carved columns, bas-reliefs, artistically carved entrances and varied peaked domes make the exterior esthetically pleasing for the photographer. 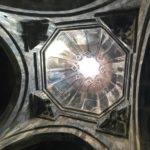 Inside, the central dome rests on four gigantic pillars incorporated as part of the lateral walls. The ceiling and what is visually a square-looking dome is plain while the apse has well-restored frescos. Carvings and portraits of the queen and other royals grace the naves and walls.  The gigantic iron chandelier has hung from this spot for centuries. Numerous large stones called Khachkars, stones carved with crosses, are from the 11th-13th centuries. In an inner courtyard and library, the holes in the floor are what is left of hiding places used for protecting priceless icons and scrolls from invaders. In spite of being damaged by 1130 and 1988 earthquakes and suffering sackings by invading armies over the centuries, the church and monastery complex is reasonably unchanged since it was founded.

The small domed Church of St. Gregory dates from 1005. Its side chapels were added later; the larger one was built in the early 13th century and the smaller in 1257. In 1245, the tall free-standing bell tower was added. The buildings are constructed with huge blocks of stone and the use of a black stone is unique. This is my first look at what would become my common reaction to and descriptor for Armenian architecture: massive.

Our Armenian route gets serious as we continue our travel another 76 miles to Lake Sevan. Along the drive, the forests are thick up the mountainsides. Trees are both deciduous and evergreen. The leaves are not quite changing as yet but any day now this drive will be a fabulous riot of color. We pass through the Dilijan National Forest, just one of four protected parks in Armenia.

It is a consistent mountainous climb of almost three hours to reach 7,000-foot Sevan Pass. The road, H52, has scores of hairpin turns with sheer drops and the climb is slow. However, the newish mile-long tunnel through the top of the mountain has not only eliminated at least 20 more hairpins, but several minutes of time. “Say hallelujah!” 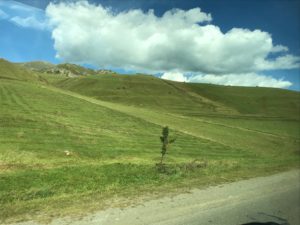 We suddenly exit the tunnel into a landscape totally devoid of trees. We are above the tree line and entering a new ecosystem. Below is the beautiful, turquoise sparkle of Lake Sevan.

Lake Sevan, at 6,500 feet, is the second highest fresh water lake in the world, after Lake Titicaca in South America. More than half the water entering the lake from rivers, streams, and precipitation flows out through the Hrazdan River. Unfortunately, the bulk of its waters evaporated leaving vast areas of the Ararat plain too arid for agriculture and therefore unusable. Entering into this mix was Russian ingenuity.

Their idea was that outflow would increase if the lake were drained. The Ararat plain would be irrigated and the huge 3,000’ elevation drop would generate electricity. Work started in 1933 under the inauspicious leadership of Joseph Stalin. Resulting hydroelectric plants generated over 90 % of Armenia’s electrical power. Many took advantage of this beautiful area and increased shoreline to built their dacha along the new shoreline, further evidence of a lack of foresight, as one will witness later. 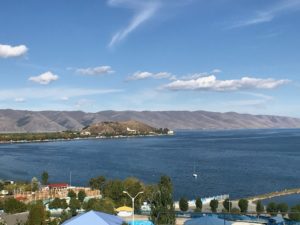 However, due to a radical decrease in water level and the resultant deterioration of natural habitats, by the late 1950s it was concluded this exploitation of the lake was too destructive to continue. The level of Lake Sevan had been reduced by over 60 feet and Sevan Island became a peninsula.

So, the next plan was to divert millions of cubic feet of water from the Arpa River via a newly constructed Arpa-Sevan tunnel. This tunnel would pass through 30 miles of mountains that surround the lake. Inaugurated in 1981, the additional water began to raise Lake Sevan levels. Still not fast enough, evidently.

So, the Soviet local council voted to build a second tunnel in order to speed up the “refilling” of the lake. Construction of the Vorotan-Arpa, a 14-mile tunnel, started and stopped over the years and was finally completed in 2004. 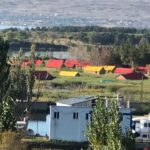 The water level of Lake Sevan began rising significantly after this second tunnel was completed. It was about this time that those summer dachas were inundated with waters and became floating houseboats. Today, several red roofs continue to peek above the water of the lake. And the lake continues to rise, projected to reach its peak in about ten years.

Example of Soviet “Erect and neglect” philosophy or “Erect then correct”?

We stay at the sprawling Harshaqua Resort surrounded by mountains, blue lake and a Water World Park. Once part of the Silk Road route, no simple silk merchant could come close to this luxury. But the city of Sevan, and yes they have a “Sevan Up Inn” in town, looks rather plain and of the typical concrete and iron construction of the Soviet era.

Within sight of the hotel is the Sevan Peninsula. We can thank Joe Stalin for this tourist resort as his draining of the lake created access to what was once an island. Since then, subsequent guesthouses and the president’s summer residence took advantage of the new real estate. 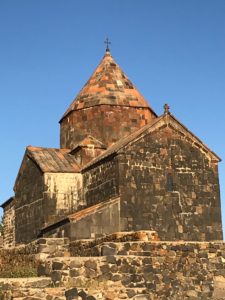 Commanding the highest point of the peninsula is the Sevanavank Monastery with its two churches, Surp Arakelots (Holy Apostles) and Surp Astvatsatisin (Holy Mother of God). Holy Mother came first, built around 894. Over 200 stairs will bring me to the promontory.

At the time the region was still under Arab rule. The monastery, though founded by a Princess, strictly adhered to the policy of allowing only sinning monks from the Armenia region of Etchmaidzin near the Turkish-Armenian border.

The churches are unique in that they are built using massive black blocks of stone. The peaked dome roofs are of multi-colored slate tiles warmly reflecting the setting sun. Several large, carved Khachkars are in the narthex. However, an earthquake brought down the roof and much of the walls of Holy Apostles’ narthex and it has yet to be rebuilt.

Both churches are simple cruciform stone structures with some well-preserved wood carvings and doors. They have been damaged by earthquakes and marauders but Holy Apostles is open and reflects the Armenian style of using massive columns, ribbed domes with gigantic iron chandelier hanging from its center. There is also the use of an iconostasis decorated with Armenian Orthodox icons.

Again, the view is the star of the site. Lake Sevan is, at this moment, serene. Its expanse is as far as one can see. Mountains loom in the haze of distance. The landscape of Armenia has been a wonderful surprise. I would say it is a geologist’s dream. The immensity and expansiveness of the land under endless blue sky is aesthetically pleasing, from dense forests to bleak peaks, from colors of purple and pink to reds and gold. Around each hairpin is the next awesome view better than the last awesome view.

These surprises make each hairpin worth it.