What does New Year’s Eve look like in Thailand? We are about to find out.

Jane, our hostel host, assisted us by arranging a direct van to transport us north to Kanchanaburi. There were several options from bus, mini van, car hire or train. Each has its positives but it is the time factor that makes up our minds as travel time can range from 2 to 6 hours. We choose the quickest transport and arrange for a van to drive us 80 miles northwest to the small city of Kanchanaburi. We have a seat to ourselves in a packed van that speeds us north for less than $5. From the bus station, we take a short tuk-tuk ride to our hotel. We are getting to be pros at this transport thingee.Our hotel is the Siam Guesthouse, a sweet teakwood lodging on a quiet alley just behind a pulsating bar. From there, it is an easy walk to the sites of this city of about 31k. Because it’s located on the edge of a mountain range, the climate is a bit cooler than other parts of Thailand. The city stands where the Khwae Noi and Khwae Yai Rivers converge into the Mae Klong River as it flows south. There are the ubiquitous temples and stupas. But there is also a well-known railroad and bridge made famous by the Bridge over the River Kwai. 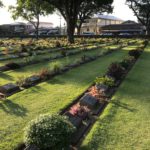 In 1942, Kanchanaburi was under the control of the Japanese and it was here that laborers and Allied POWs were worked to death on the infamous Burma Railroad and the building of the bridges that spanned the River Khwae Yai. When POWs arrived at Ban Pong, west of Bangkok, they already had been through hellish conditions and deprivation. What they saw was an endless line of surveyor’s markers leading into dense jungle and over mountains for 260 miles north into Burma. POWs were expected to greet this opportunity as a privilege as they built a railway for the honor of the Emperor. Overstretched and under-resourced, these frail, captive men faced the fanaticism of the Japanese Empire.

In Kanchanaburi, memorials and museums commemorate this atrocious event that killed from disease, maltreatment, or accidents over half of the prisoners who worked on the project. This afternoon, we learn more about this history at the excellent Thailand-Burma Railway Centre. Privately funded by an Australian historian, this interactive and thorough museum is dedicated to the history of the Thailand-Burma Railway which became known as the Death Railway.

After the Japanese defeat at the Battle of Midway in June 1942, it was difficult to supply their forces in Burma. Allied submarines dominated the area in and around the Andaman Sea. As a result, Japan determined to link up the rail lines between Bangkok and Rangoon (now Yangon).

The Burma Railway was a 258-mile stretch of railway between Ban Pong, Thailand to Thanbyuzayat, Burma (now Myanmar). It was built to support the Japanese war efforts in Burma. Over 200k Southeast Asian workers known as rōmusha and over 60k POWs were forced to build this RR through hilly, jungle terrain and over many rivers. Over 90k civilian and 12k POWs died in the process. Of the 686 known US POWs, 133 or 19% died.

As an American engineer said after viewing the railway project, “What makes this an engineering feat is … the accumulation of factors. The total length of miles, the total number of bridges — over 600, including six to eight long-span bridges — the total number of people who were involved (one-quarter of a million), the very short time in which they managed to accomplish it, and the extreme conditions they accomplished it under. They had very little transportation to get stuff to and from the workers, they had almost no medication, they couldn’t get food let alone materials, they had no tools to work with except for basic things like spades and hammers, and they worked in extremely difficult conditions — in the jungle with its heat and humidity. All of that makes this railway an extraordinary accomplishment.”

If not for the cruelty to human beings and loss of life, the overall construction was indeed an “engineering feat.” Japanese soldiers are widely remembered as being cruel and indifferent to the fate of prisoners of war and the Southeast Asian rōmusha laborers. Conditions and treatment were loosely documented (many feel too loosely and tidily) in the well-known 1957 film The Bridge Over The River Kwai with Alec Guinness and William Holden. In the film, the POWs are depicted building Bridge 277, which was built over a stretch of water that was then known as part of the Mae Klong River. (In 1960, because of discrepancies between facts and fiction, this portion of the Mae Klong was renamed the Khwae Yai.)

POWs were at the bottom of the pecking order for punitive and fanatical treatment by the Japanese overseers. Living and working conditions were horrific, with workers suffering maltreatment, sickness from cholera and dysentery to beriberi, and starvation. Little effort was made to honor the rules protecting POWs. It was for this reason that following the end of the war 111 Japanese military officials were tried for war crimes and 32 of these were sentenced to death.  No compensation or reparations have ever been provided to Asian victims.

Across the road is the well-maintained Kanchanaburi War Cemetery, the main POW cemetery for those who died during this time. After the war, the remains of most of the war dead and most of the military who died on the Burma RR were moved from former POW camps, burial grounds and lone graves along the rail line to official war cemeteries. One of the three cemeteries maintained by the Commonwealth War Graves Commission, here 6,982 victims are buried, including 3,585 British, 1,896 Dutch, and 1,362 Australians. Two graves contain the ashes of 300 men who were cremated. Identified American remains were repatriated.

A walk up Maenamkwai Road past an endless string of one massage parlor per 8 bars, brings us to the WWII Museum (The JEATH War Museum is at the other end of town near the bus station. This is not a misspelling but the acronym for Japanese-English-American-Australian-Thai-Holland. The museum is dedicated to the bridge and the Death Railway A.K.A. The Burma Railway.) This War Museum contains a very eclectic collection of historical, cultural and religious artifacts. Cost is only 40 baht but the museum and displays are very poorly maintained.

And just beyond the museum, spanning the river, is the iconic Bridge 277. 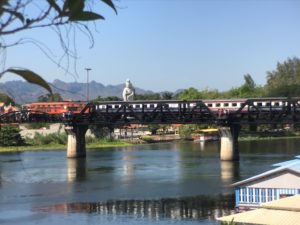 Bridge 277 stands much the same as when it was built 75 years ago. The first wooden RR bridge, built in Feb. 1943 was replaced soon after by a concrete-and-steel bridge in June 1943. The bridge consists of the original eleven curved-shaped truss spans, while the two trapezoidal-shaped spans were later added by Japan after the war ended (they had been bombed by the Allies). 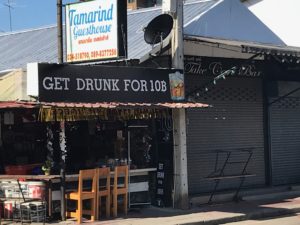 Kanchanaburi is most definitely a party city. The 2-miles of main road is lined with restaurants, bars blasting their own version of music, endless motorbike and car cruising, massage parlors, at least three 7-Elevens, numerous food venders and around the Bridge, a huge shopping mart and local vendors. A Night Market is also found toward the train station. It is New Year’s Eve and small firecrackers and big booms light up main street. I assume the tin and tile roofs prevent town from burning down. What Phetchaburi lacked in night life and exacerbated with mean monkeys, Kanchanaburi makes up for in cleverly-named bars, a livelier nightlife and friendlier dogs.

While visiting the Railway Museum, in the background, I hear a familiar refrain that will now resound in by brain for the remainder of my trip. Lieutenant Ricketts composed the Colonel Bogey March during WWI as a British marching tune. But it was during WWII when it reached its apex of notoriety when this whistling ditty was set to popular, and graphic, lyrics that soldiers loved. Probably Americans best remember the tune from the movie Bridge Over the River Kwai. Toby O’Brien a British publicist in 1939, expressed the soldiers’ feelings perfectly with his lyrics:

Göring has only got one ball
Hitler’s are so very small
Himmler’s so very similar
And Goebbels has no balls at all.

Strolling the Night Market, checking out the ice cream at the 7-Eleven, enjoying the Thai noodles and beer, it is easy to see why this is a popular town. With the whistling Colonel Bogey ditty flowing through my brain, my niece and I seek out some wonderful Thai food and beer and watch the endless parade of people and stray dogs trot past.