Driving in, around, over and through the striking landscape of steep cliffs and the very green Balkan Mountains, I am surrounded by the lush flora and fauna of the Bulgarka Nature Park. The mountain range forms the watershed between the Black and Aegean seas. Shipka Pass, at 3820 ft., marks the border between Stara Zagora and Gabrovo province. During the Russo-Turkish War in 1877-1878, the pass was the locale for a series of historic battles fought between the Russians, aided by Bulgarian volunteers, and the Ottoman Empire. With Russian assistance, these battles led to the independence of Bulgaria, an event Bulgarians have never forgotten. Today, my cousins will share this part of their history with me. 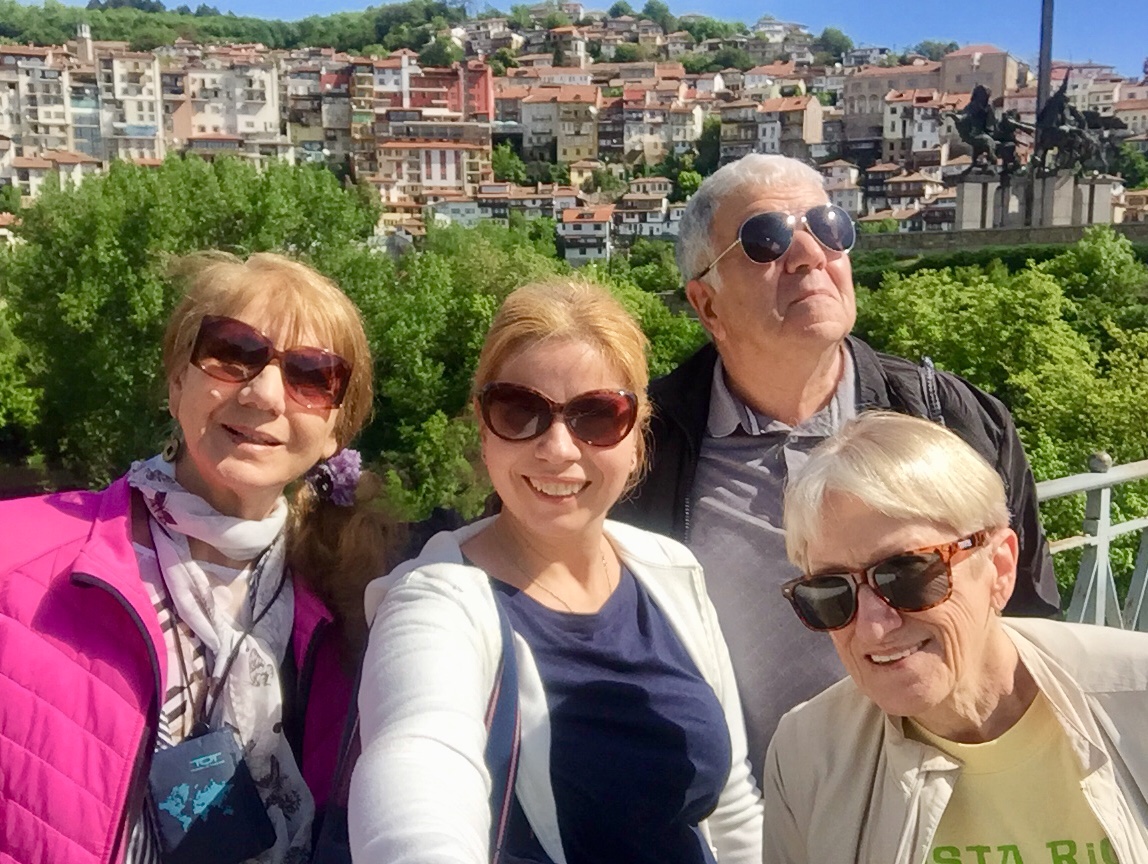 My Bulgarian cousins and exploring my ancient roots.

Veliko Tarnovo, Great Tarnova, was Bulgaria’s capital before the Ottomans conquered the Balkans in the 14th Century. Its old city, located on the Yantra River, was a fortress town along the main trade routes connecting the West Balkans with the Black Sea, and Eastern Europe with the Middle East. Often called “The City of the Tsars,” Tarnovo served as the capital of the Second Bulgrian Empire from 1185-1396. The city reached the peak of its influence under Tsars Kaloyan and Ivan Asen II. Until 1256, the medieval Empire was the dominant power in all the Balkans and even defeated the Byzantine Empire several times. However, once the Ottomans came, Tarnovo faded in importance.

The oldest sections of Veliko Tarnovo are situated on three hills, and not particularly high ones. Trapezitsa Hill is known for its many churches and the homes of the nobility. The hill is famous for its Tarnovo Artistic School architecture, a style developed during the 13th and 14th centuries. The style was diverse and adapted to the function of the building. Churches were intended to be a place of penance and purposefully kept relatively small; because of their small length and width, they rose in height, sometimes topped with a rectangular bell-tower. Facades were richly ornamented, mixing bands of stone with bricks for design. But as is typical of orthodox churches, the interiors wanted for nothing when it came to relics, mosaics and icons.

Tarnovo’s cobblestone streets are marvelous to wander. Of course I am partial to cobbled streets, quiet squares, history museums and monuments. The city has all of this and more. Most people are locals and it helps that I am being guided by a local who loves sharing the history of his country. It all makes for a great experience. 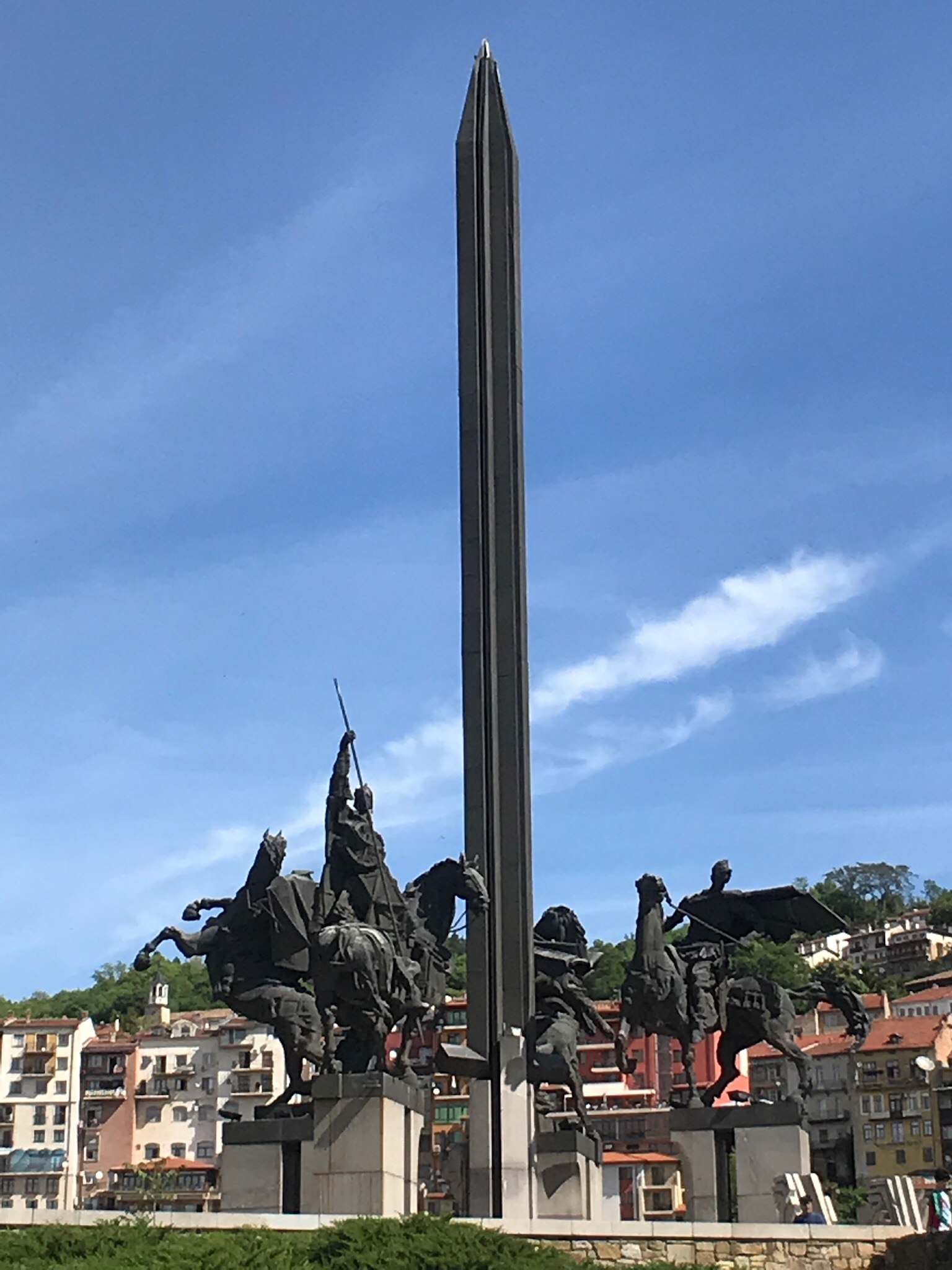 Our first stop is across the picturesque 1892 Stambolov Bridge and onto a rocky promontory above a bend in the Yantra River. Portions of Old Tarnovo lie across the ravine, it’s colorful houses climbing another hillside. Here, the Monument to the Asen Dynasty is dedicated to those who defeated the Byzantines. Today, the monument is also surrounded by a colorful group of Bulgarians in their traditional dress, all more than willing to be captured on film.

A narrow blade of steel slices 120 feet into the blue sky, surrounded by large bronzes of mounted soldiers with flowing capes and drawn swords. The action is dramatic, the horses alert and ready for the defense of their city. The four horsemen depict the Bulgarian kings Asen, Peter, Ivan Asen and Kaloyan. Like all people, they did not like having their taxes increased, so the Asen leaders led a rebellion against the Byzantines in 1185. Early rulers like Kalyan referred to himself as “Emperor of the Bulgarians and Vlachs” while later leaders adopted the title of Tsar.

Below, wrapping itself like a loving snake around the hills, the Yantra River weaves its way along the bottom of Trapezitsa and Tsarevets hills. Atop both hills are the ruins of medieval fortresses. Portions of old defensive walls, sharp cliffs of rock, and the river itself create not only a beautiful city, but a defensible one. Views are further enhanced by the sweeping vistas of green and a plethora of fragrant, blooming white acacia and chestnut trees.

Little of the original fortifications remain atop Trapezitsa Hill. The Monastery of St Ivan Rilski (John of Rila) and the Saint’s relics were kept there until 1495 before their removal to the Rila Monastery. In the valley between the Trapezitsa and Tsarevets hills, and outside any medieval fortifications, is the small Church of St. Demetrius of Thessaloniki. The church is topped with a square tower and octagonal belfry. Plundered and destroyed several times, most has been rebuilt and the interior only contains fragments of its original frescoes. This church was the church of the common peasant yet was chosen for the burial place of both Tsars Ivan Asen and Peter IV. 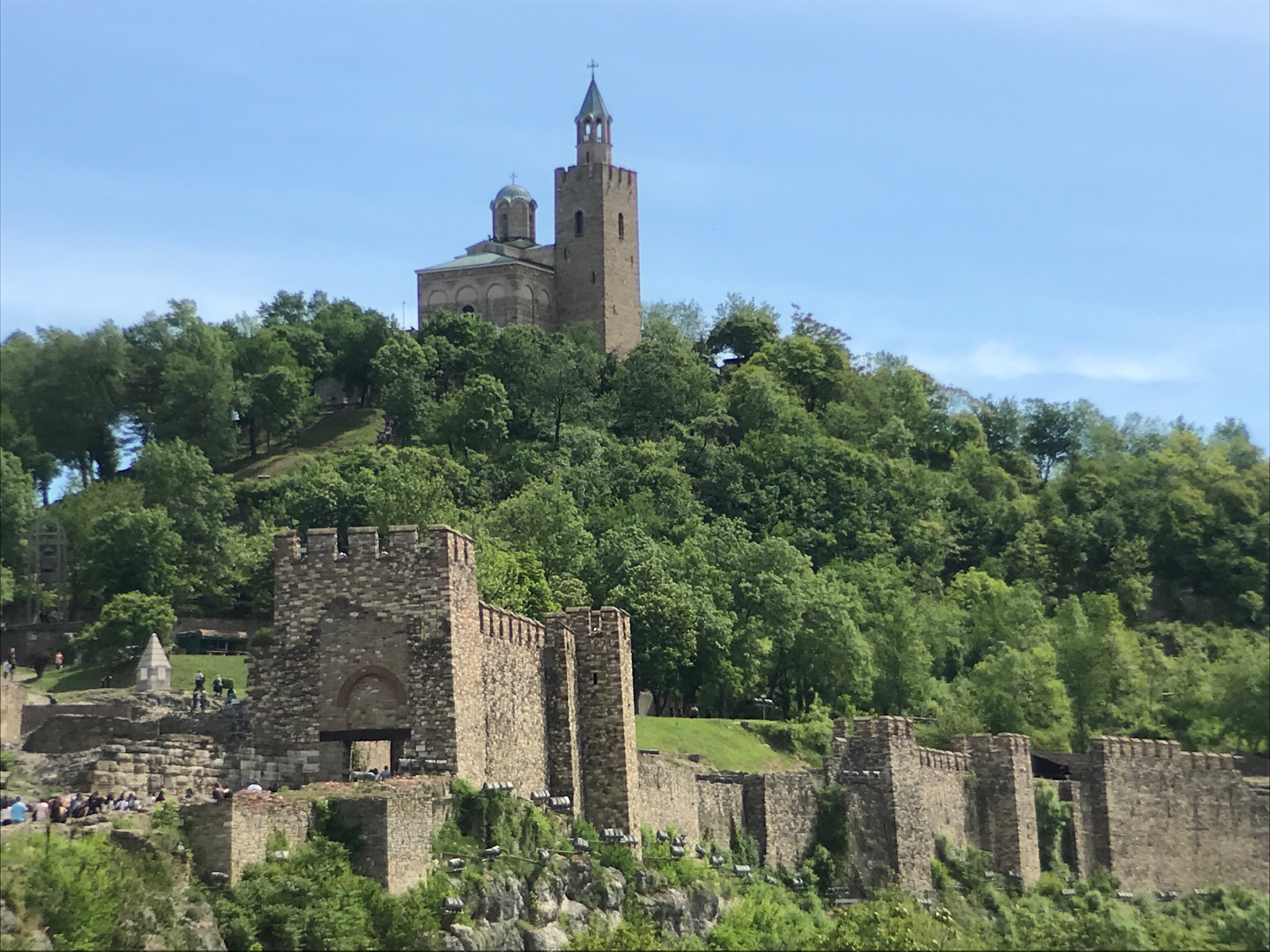 We climb Tsarevets Hill to explore the fortress which commands a view of the city and surrounding mountains. Restored walls, gates and towers are built in the traditional style of alternating rows of red and ochre brick and stone. The foundation of the 48,437 square foot fortress remains. This fort was the former seat of the medieval tsars from where 22 Bulgarian kings ruled. It originally contained over 400 houses, 18 churches, and the royal palace. Today, stone gates and fortress walls, some up to 40’ high and 30’ thick, can still be appreciated for their workmenship and strength. 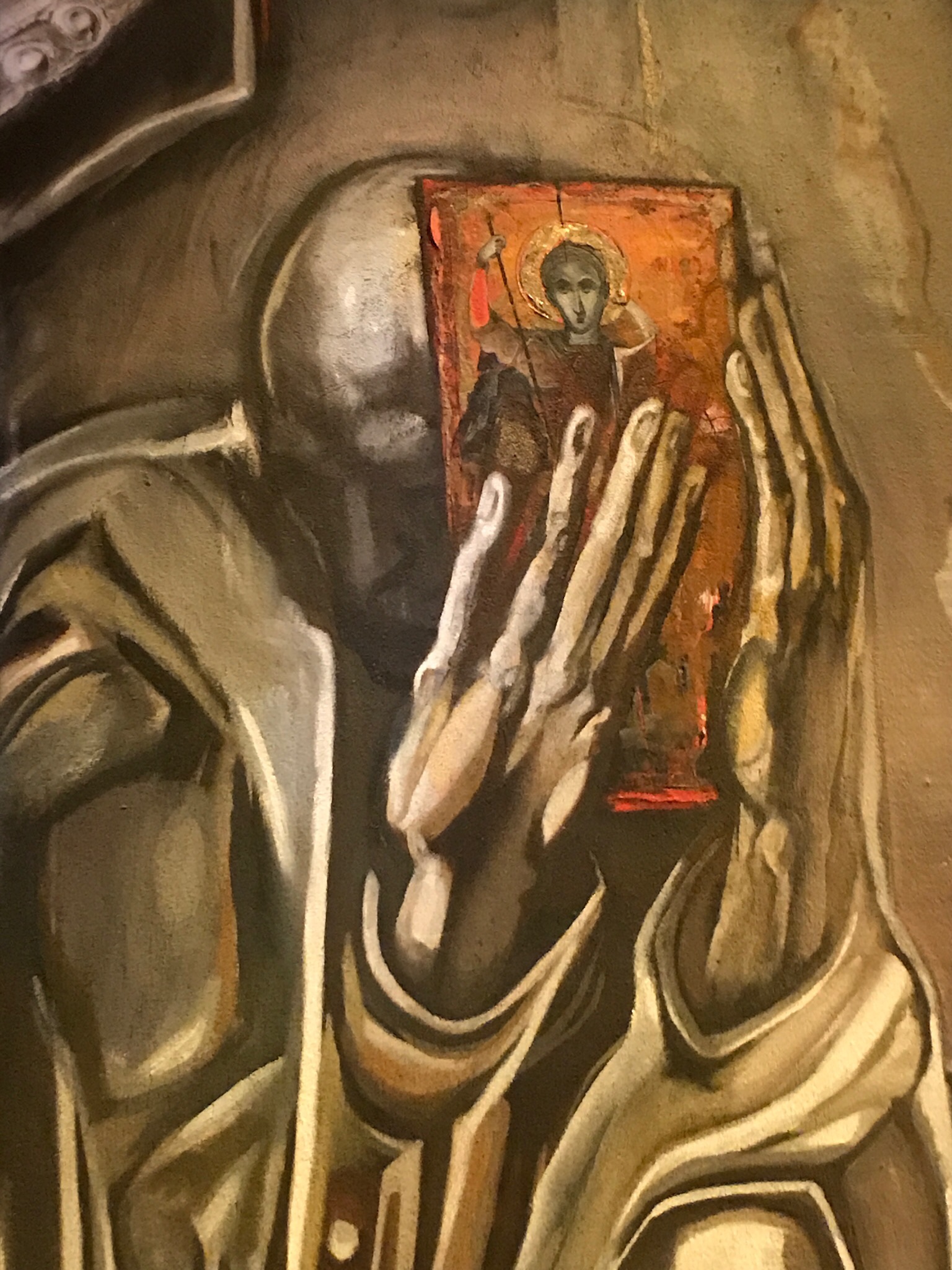 At the highest point sits the royal Patriarchal Cathedral of the Holy Ascension of God. It was constructed directly on top of an earlier Byzantine basilica which dated to the 5th–6th century AD. A later cathedral was the seat of the Bulgarian patriarch from its construction in the 11th–12th century to its destruction in 1393. The current cathedral, built of crushed stone and mortar with limited brickwork, was reconstructed in the 1970s and 1980s, is of simple Early Bulgarian design with a bell tower and cross-domed plan. The interior is unique. All interior walls and ceiling are decorated with eerie black and white modern frescoes. During the church’s 20th-century reconstruction, its interior was repainted by artist Teofan Sokerov, who depicted important moments of medieval Bulgarian history in a modernist style. Due to these murals, the church has never been reconsecrated and remains inactive.

In town, we walk by the Monument to Mother Bulgaria. “Mother Bulgaria” kneels in memory and appreciation of all Bulgarians who have died for the freedom of their country. On each side of the monument, statues of soldiers represent those who were killed in the Russo-Turkish, the Serb-Bulgarian, the Balkan and the First World Wars.

Returning into the mountains, the 800-year-old Dryanovski Monastery sits below towering cliffs of slate and forested mountains. Small and simple and topped with a massive slate roof and small bell tower, it’s interior icons and frescoes are dramatic. The frescos could benefit from cleaning but what is lit is beautiful.

In Gabrovo there is the interesting nature and open-air Ethnographic Park of Etara. One can stroll its streets where artisans ply their trade or demonstrate traditional methods of craftsmanship. The wood and stone block architecture represents the best of Bulgarian Empire: solid and functional. Roofs are either massive logs or huge slabs of slate. Because owners were taxed according to the house’s footprint, second stories are larger and, again to save money, several of the windows and facade designs are frescoes. Waterwheels churn out the energy for everyone from iron workers to wool spinners. 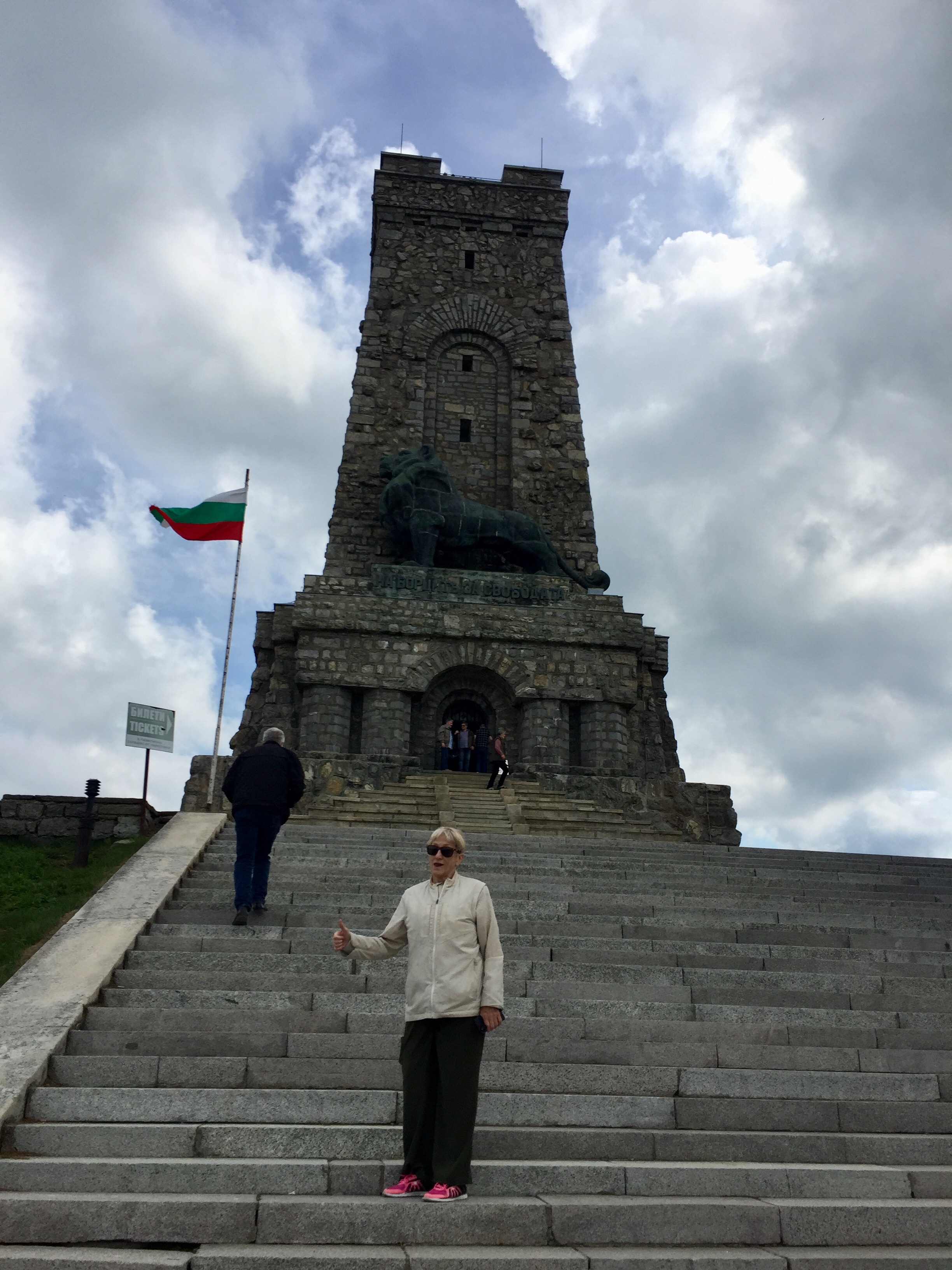 A final stop of this history-filled day is high atop Stoletov Peak and 895 steps up to a sturdy block tower that represents the Monument to Freedom. The monument is a 98-foot truncated pyramid with a 26-foot bronze lion above the entrance. It is a memorial to those who died for the Liberation of Bulgaria during the Battles of Shipka Pass in the Russo-Turkish War of 1877-78. A marble sarcophagus housing some of the remains of the Russian and Bulgarian casualties is on the first floor. There are four other floors where one can find replicas of Bulgarian military flags and other relics, plus paintings depicting this historic battle for Bulgarian liberation from the Ottomans.

Soldiers saw this battle as their final stand against an overwhelming Ottoman army making its way to the capital of Stara Zagora. When they ran out of bullets, they threw rocks and dead bodies over the battlements. Ultimately, be it the Bulgarian determination or bodies, the day was won and the Turks defeated. From the top of the tower, the views of the surrounding mountain range and valley are superb. 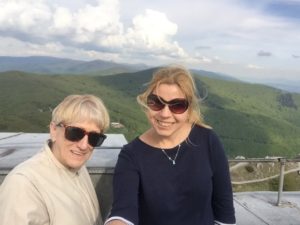 And as an added treat, among the canon and vistas, in the far distance is Buzludzha or what one might call the “Russian flying saucer.” This futuristic building, constructed by the communist and then abandoned after they left, rests eerily atop a peak and can be seen for miles. The interior mosaics are in ruins. It now invites vandalism, movie studios, and questions from tourists.

Below the memorial, a lively group of Bulgarians join hands and sing and dance as they celebrate their heritage and independence. It accentuates my main lesson for today – Bulgarians are very thankful for the assistance they received from the Russian soldiers who fought at their side in ousting the Ottomans in 1378. This is all living history for my Bulgarian cousins. And for me.