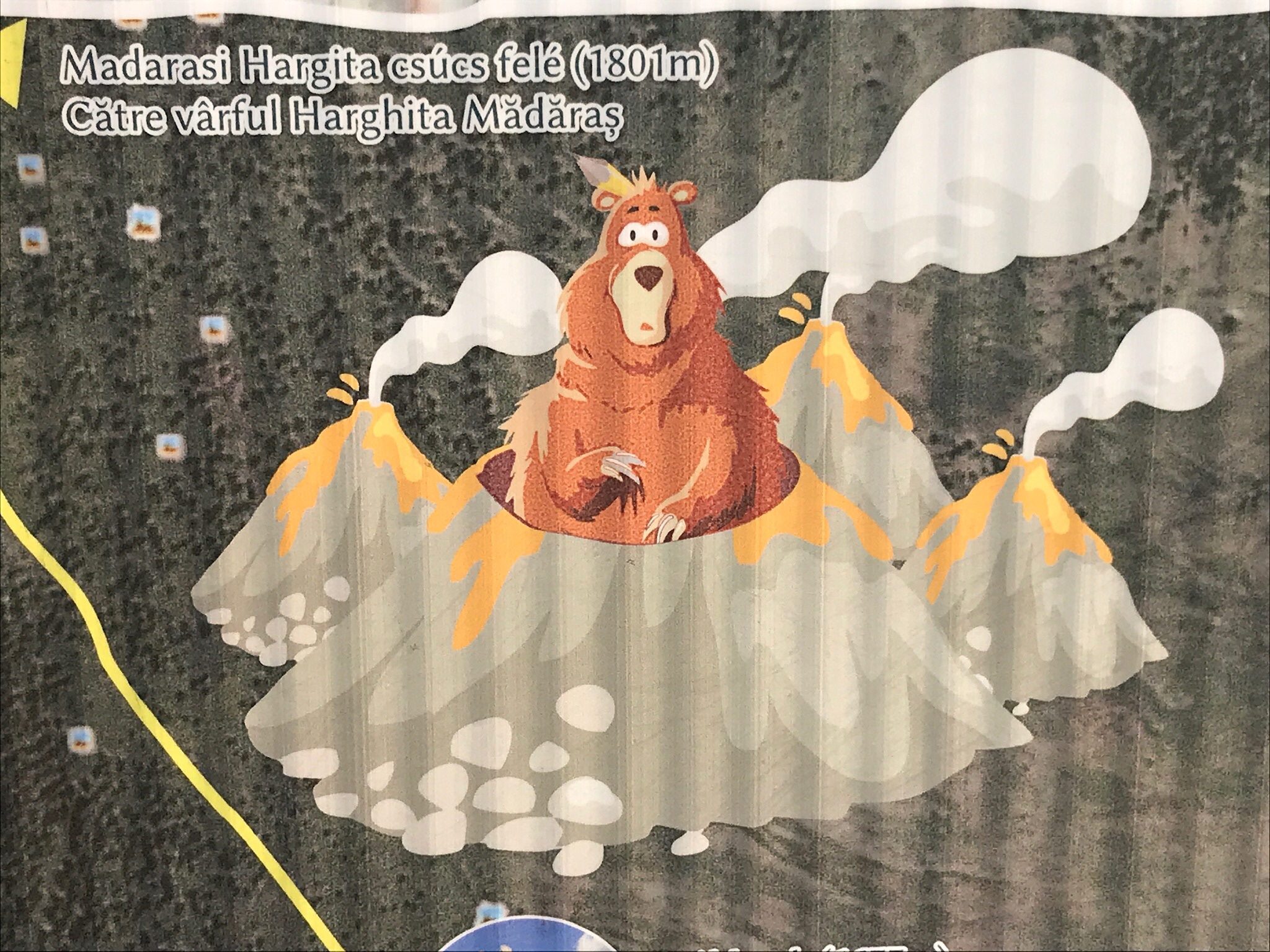 The Transylvanian Alps are compact, rugged peaks that rise to a high crest of 8,346 feet at Mt. Moldoveanu just east of Brașov. But the eastern Carpathians, where I am currently, have an average elevation of 3,300 feet and exceed 6,200 feet only in the highest ranges. The nature parks even have their own Smokey the Bear

I am a reasonably fit 74-year-old woman. I walk up the steep hill at the top of my street which has about a 12% grade. I work out several times a week. I have hiked the Sierras, Rocky Mountains and the Annapurnas in Nepal. It is not the hiking that concerns me. It is the altitude. Currently, I live at sea level. I am thinking that my walk in the Carpathians this morning might be a challenge. 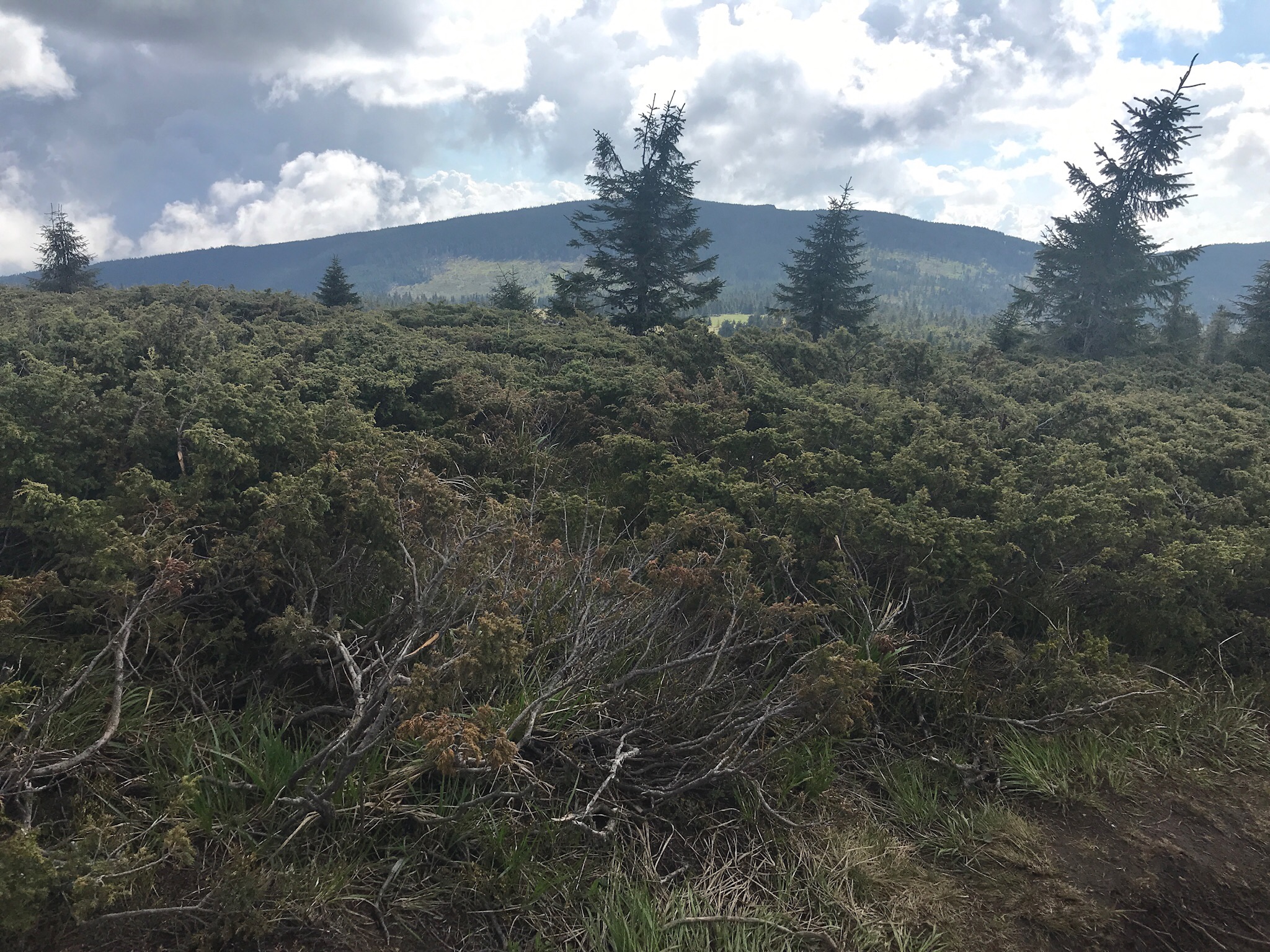 We drive through dense woods of oak, beech, fir and pine, passing the occasional horse pasture and chalet. These evergreen forests and peaks are home to muflon big-horn sheep; wild boar; red, fallow and roe deer. None of which I see. Our van zips by a local horse-drawn wagon and a farmer tending his field. Soon, we enter alpine skiing country, when there is snow, which is not a problem at this latitude. We pass through the valley of Ivo Stream for about 10 miles before the final climb to the rest house atop Mt. Harghita. The base elevation here is about 5347 feet. I spot patches of snow along the road and the ski runs. From here, we climb on foot. 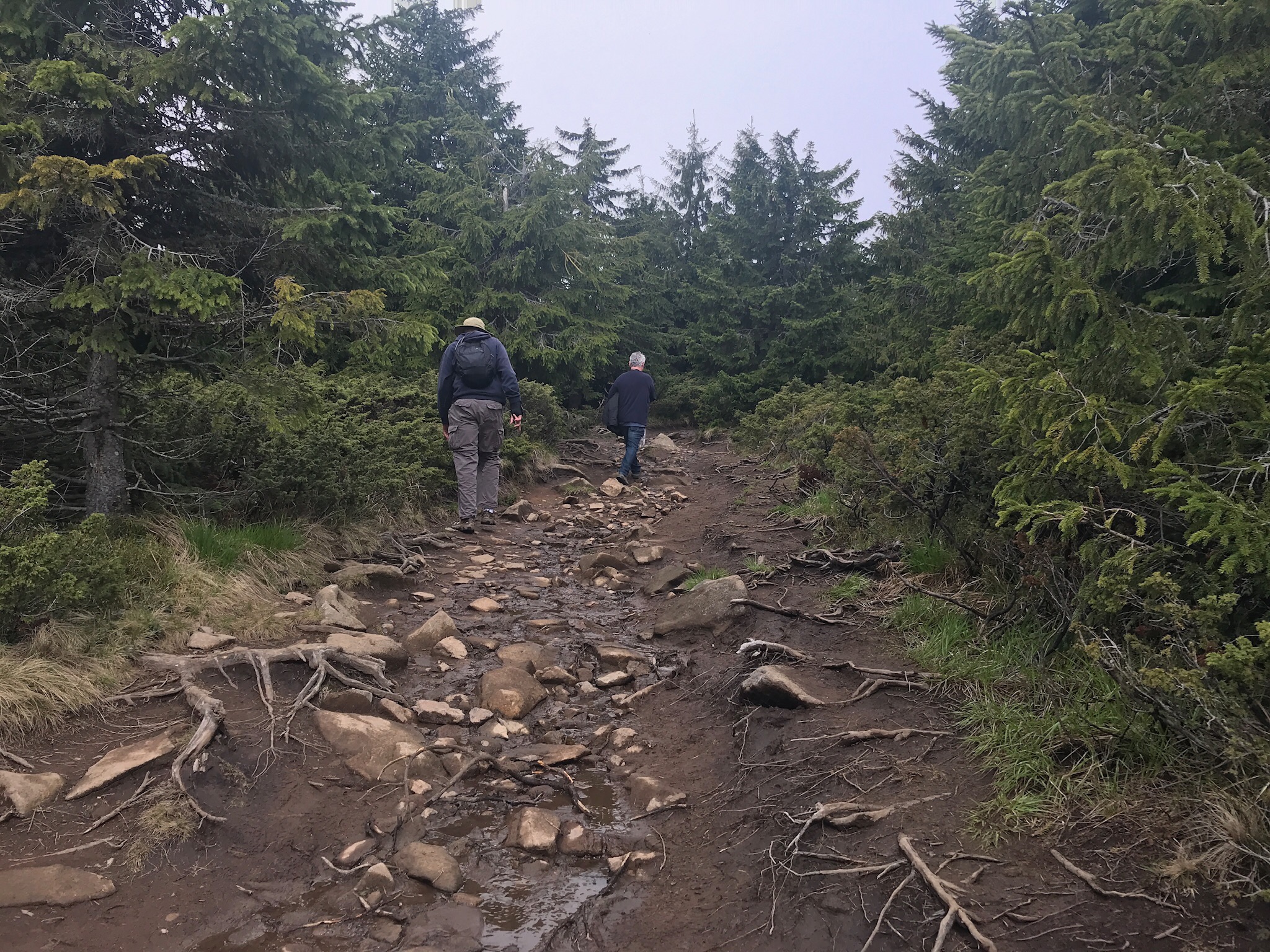 The climb to the peak of Hargita-Madaras takes about an hour. It is not difficult but because of the pouring rain last night, the rocky, irregular path is muddy with puddles of water to avoid. Vegetation is mostly low junipers and pine. Unseen cuckoo birds call in the forests. We are told the gypsies and bears pick the juniper berries. The juniper berries are used for making gin – by the gypsies not the bears. Gypsies also come into these mountains for the blueberries and mushrooms which they sell in the villages.

The panoramas of the Carpathians are amazing. Low clouds and fog drift across peaks hiding the sun. The temperature drops and a breeze picks up. At the top the scenery is breathtaking with miles of Transylvanian mountains and valleys lying at our feet. I stand atop fog-shrouded Harghita-Madaras, at approximately 5908 feet. We are actually standing on the eastern remains of a volcanic crater the width of which is 3 miles. All about me are totems.

The Harghita-Madaras is the highest mountain in Szeklerland. Szeklerland or Székely Land is an historic and cultural area in Romania inhabited mostly by a subgroup of Hungarians who have lived here since the Middle Ages.

Transylvania was autonomous until 1867 when it was incorporated into the Kingdom of Hungary. In August of 1916, Romania signed a treaty with the U.K. and her allies agreeing that Transylvania would become Romanian territory after World War One. Hostilities between the two countries followed but in 1920, Transylvania and its agricultural and mineral wealth, became a part of Romania. Hungary got part of it back before Romania regained it after World War II. Through it all, the Hungarians stayed and it is estimated between 600,000 and 860,000 Szeklers remain in this region of Transylvania.

However, there remains confusion. In 2018, the Hungarian Academy of Sciences stated: “The dominant historical, archaeological, ethnographic and linguistic standpoints consider the Szeklers to be an integral part of the modern Hungarian nation in ethno-cultural terms.” Evidently everyone does not agree. In 2013 demonstrators appeared in front of the Hungarian Consulate in the Romanian city of Cluj carrying a sign which read “Szeklers are not Hungarians.” Szeklers speak Hungarian, every town has a Hungarian and Romanian name, neither of which I can pronounce. They maintain a strong and distinct community identity. Some say that Szeklers and Hungarians are separate nations who have common roots and language. Others state that Szeklers are “Hungarians” and no further discussion is needed. Our guide is Hungarian and in the later group. 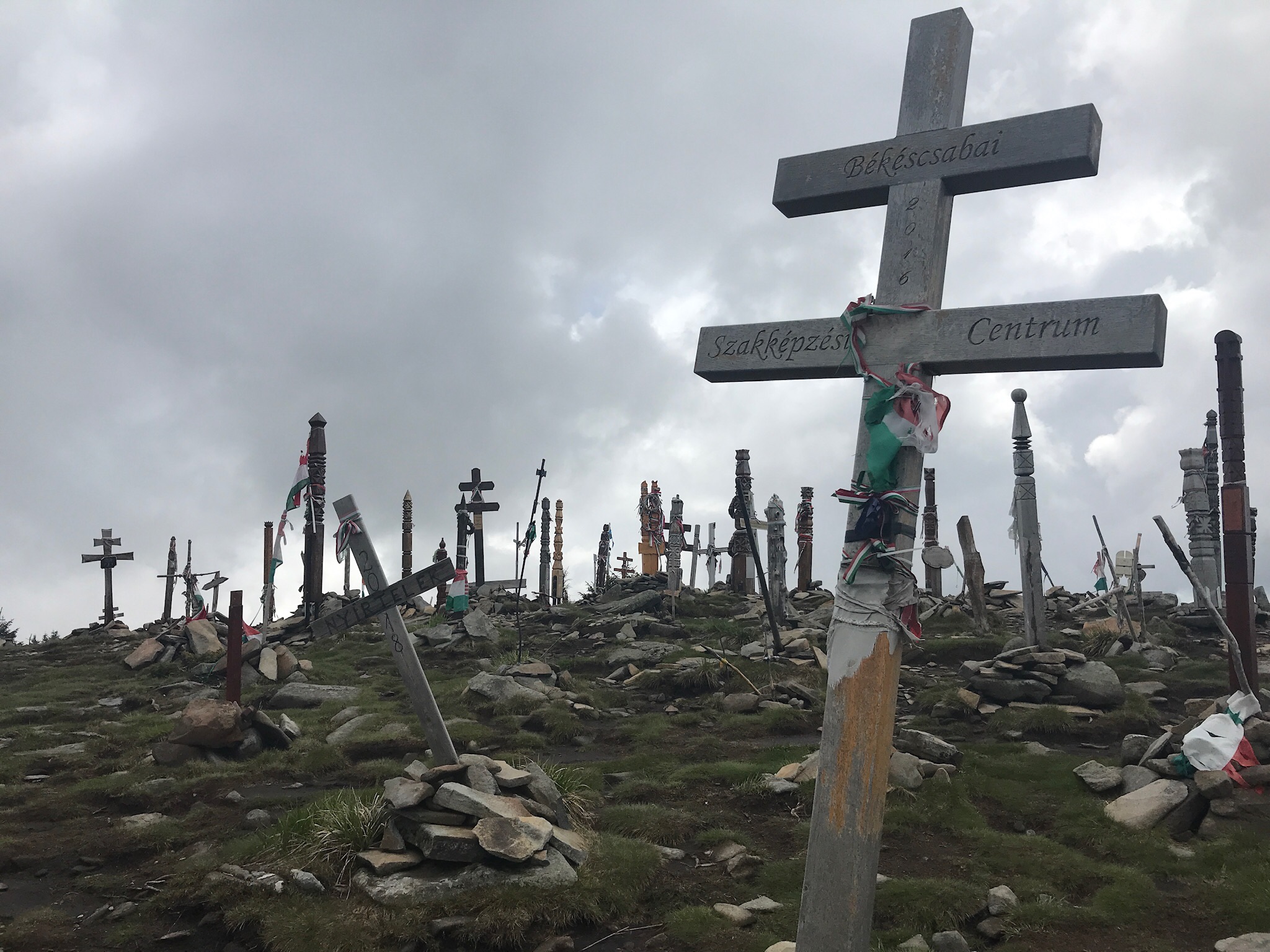 Harghita-Madaras is sacred for Szeklers. Its peak is shrouded in a sudden drift of fog and all about me are carved totems of all shapes and sizes, carved granite slabs and wooden posts, simple to elaborate. Cairns of all sizes dot the peak, rock piles and posts carefully laid by Szekler pilgrims. Blue and gold ribbons and banners of Székely Land flutter in the breeze. I just climbed this path and can’t imagine packing up the materials to create these lasting totems inscribed as memorials to Szekler family heritage.

On our return from Harghita, we pass through Szekler villages known for their beautifully hand-carved wooden gates ranging from the simple to intricate that took many months to complete. These gates were a sign of hospitability and showcased the skill of local woodworkers. Gates are mostly carved from oak and can last for more than a hundred years. Most gates consist of a section wide enough for a wagon, a smaller entrance for people. A pigeon loft transverses the top, though it is more for looks than messy pigeons. Some gates may add colorful paint to their designs. The colors used on the gates are red, green, white and blue. The artistic value of the gate is proven by the carpenter’s work, the only writing on it being the maker’s name and the date.

High atop Gordon Hill, 3125 feet above the village of Farkaslaka, is Transylvania’s newest attraction. The gigantic 72-foot steel modern statue called ‘Heart of Jesus’ can be seen for miles and miles. Erected in 2011 among some controversy as to its usefulness, the shiny statue depicts Jesus with outstretched arms, think Rio’s ‘Christ the Redeemer’. Actually, it is more like Darth Vader in titanium.

Énlaka, or Inlăceni, is an historic village in Székely Land and a traditional Unitarian village with less than 120 inhabitants. Only 13 children live in the village. Despite decreasing populations, villagers are working to preserve the ancient traditions and architecture of the local culture. We visit a wonderful museum and home of a local who has made it her mission to collect artifacts of the village. In her barn, she has created an open air museum filled with the bric-a-brac of village life. The village is struggling to keep their traditional Szekler culture as more of the younger generation moves away. 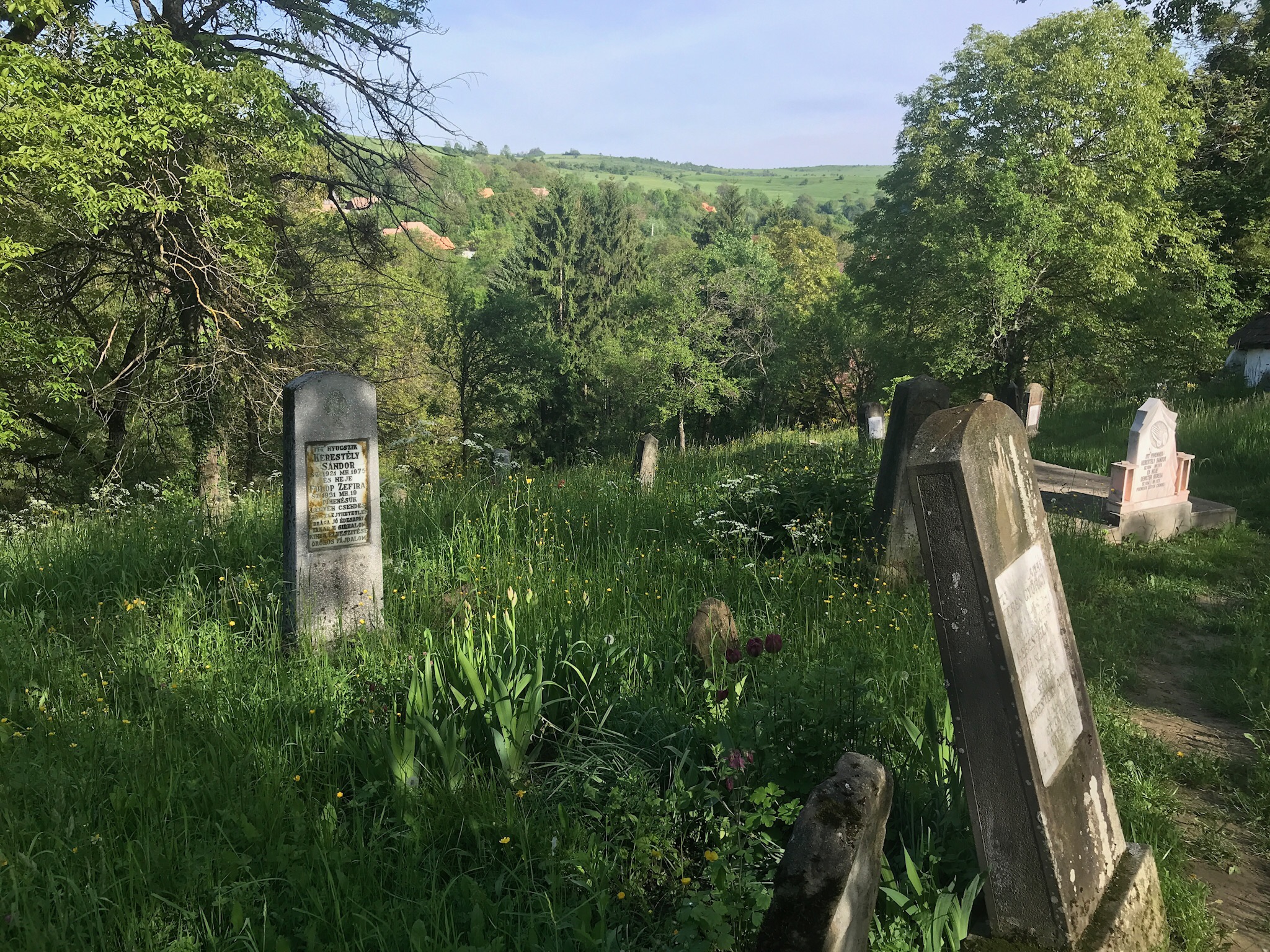 The village is best known for its Unitarian Church. The first church here was catholic but the congregation is now Unitarian with their first female minister. They have been here for over 1600 years, continuing to practice their traditional culture and language. The minister explained that all Hungarians in Transylvania are Szekler. (Western Hungarians are Magyars and catholic.) There are some 60,000 Unitarians remaining in Transylvania.

These villagers, like the pilgrims to Mt. Hargita, consider themselves Hungarian and Unitarian. The Unitarian Church is a plain white-wash with no icons or photos or unnecessary adornment. The church ceiling is decorated with beautiful squares of delicate designs with Old Hungarian runiform script.

In the surrounding cemetery, colored with immense peonies and wildflowers, stands an ancient oak tree under which church services were held when the Unitarians could not openly use their church. 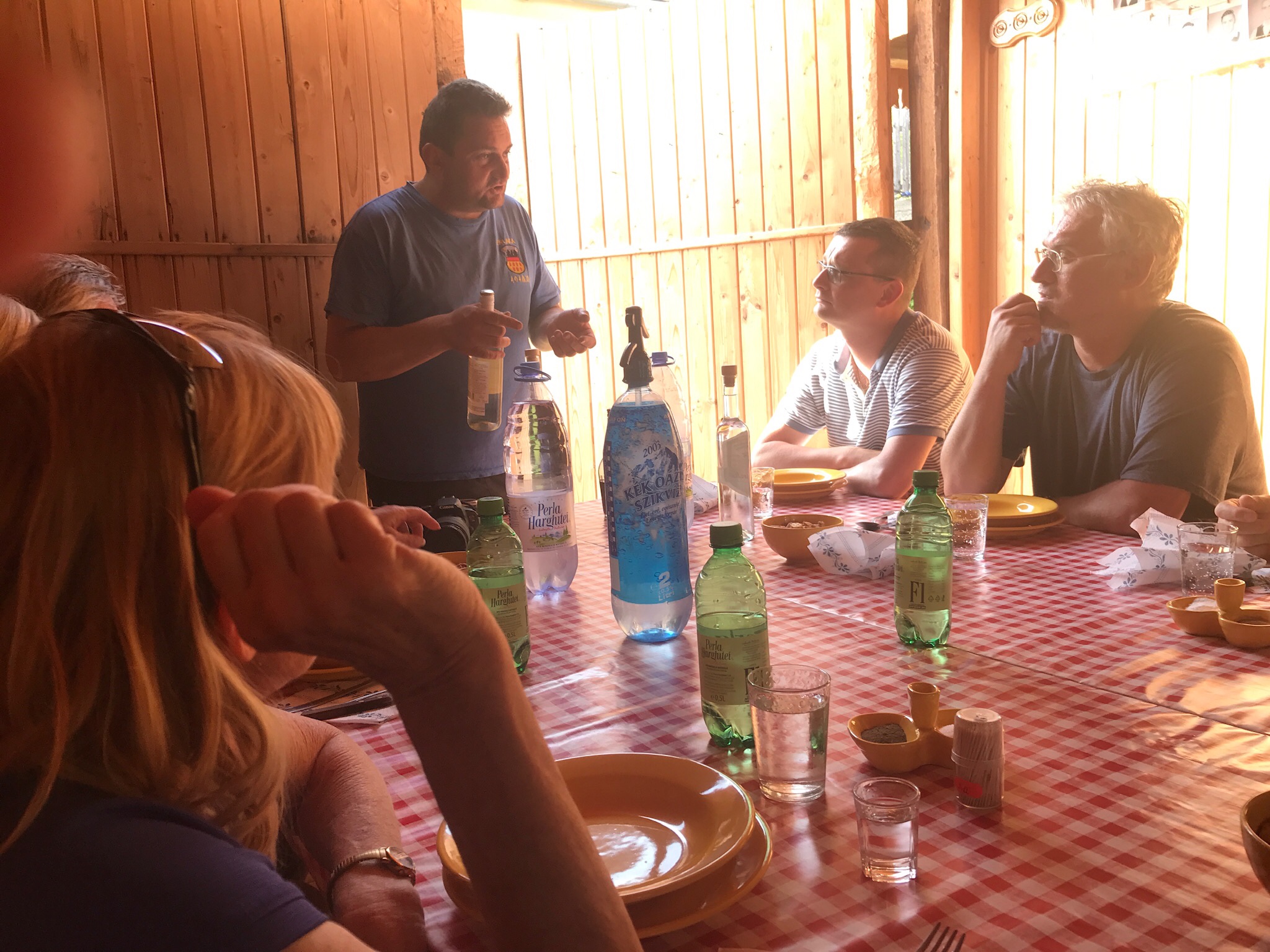 We remain in Énlaka for a homemade dinner served in a local barn. The second, and third, possibly fourth time today we are greeted with the traditional welcoming drink of Pálinka, the locally made plum brandy. Pálinka is a traditional fruit brandy in Central Europe with origins in the Carpathian Basin during the Middle Ages. Like French Champagne, Havana Rum and Kentucky Bourbon, Pálinka is protected by the European Union as a geographical region and only fruit spirits mashed, distilled, matured and bottled in four provinces of Hungary can carry the name of pálinka.” It may be made of any locally grown fruit, but the most common ones are plums, apricots, apples, or cherries. And as with all great beverages, Pálinka has its own special glasses and bottles. 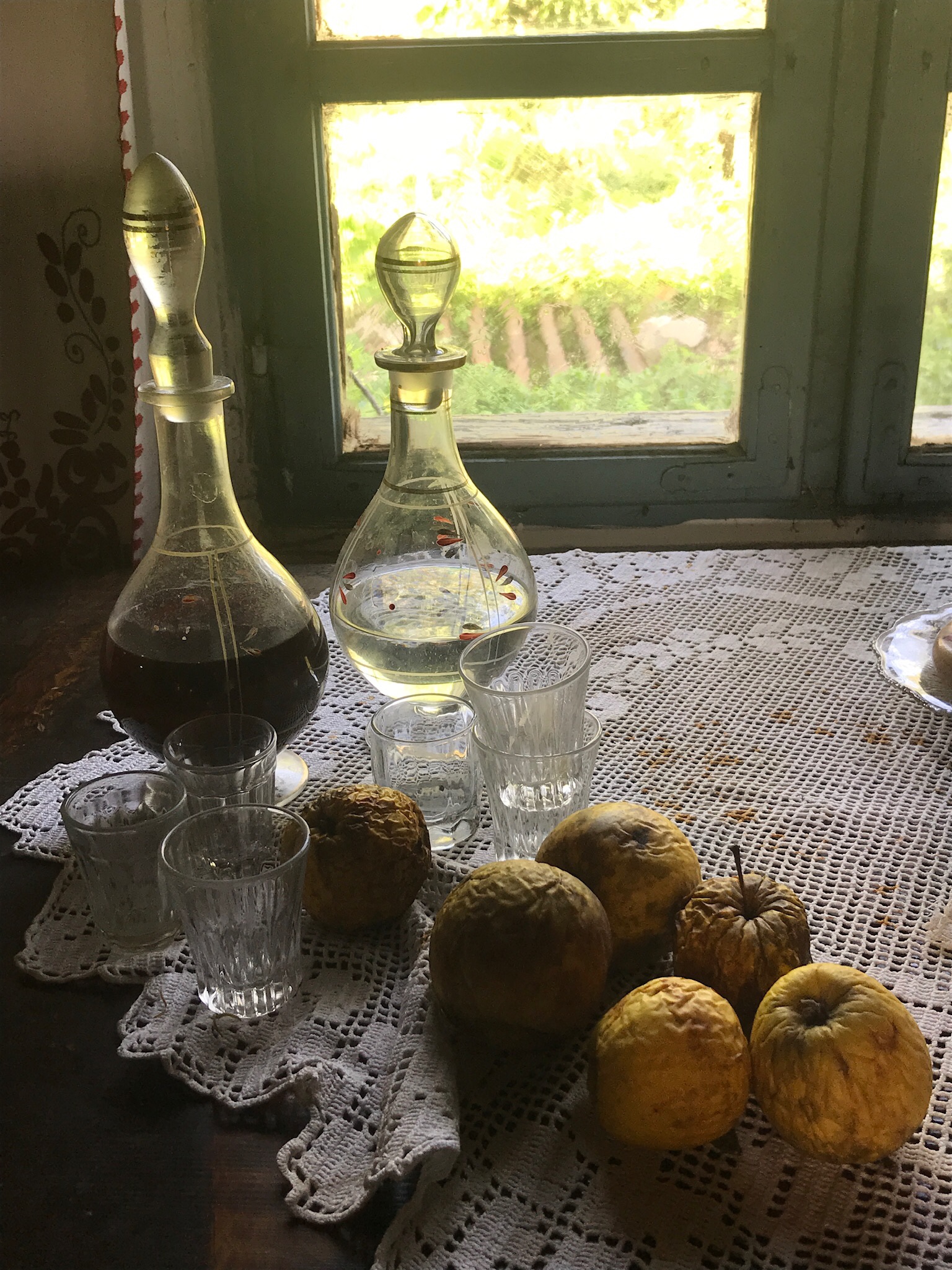 Drinking any home-distilled alcohol of 50+ proof is a challenge. The key is to never sip, thus avoiding the taste buds in general. By tossing the clear liquid into the back of the throat, one escapes the “fire water” gasp and just receives the warm burn in the chest.

Returning to Odorheiu for the night, I believe we are all happy travelers.