Stara Zagora, meaning the old region beyond the Balkan mountains, was settled by Thracians sometime between the 5-4th century BC. The city itself was founded by Phillip II of Macedon in 342 BC. The city grew to its largest radius under Roman Emperor Marcus Aurelius (161-180) and became the second most important city in the Roman province with such auspicious visitors and Caracalla, Septimius Severus and Diocletian. As a result of the Gothic War 376-382, the city was destroyed but rebuilt by Justinian. In 1208 the Bulgarians defeated the Latin Empire, kicked their Roman butts out and established their own homeland. 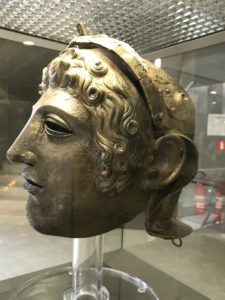 But the Ottomans, pretty much an unstoppable force at the time, conquered Stara Zagora in 1371. The Ottomans would be a blessing and curse. They built schools but also were a strict and harsh taskmaster. Did my ancestor decide it was time to get out of Bulgaria? Many Christians fled the Muslims and moved further north (ultimately the Ottomans reached the gates of Vienna before being halted). Following the much celebrated Ottomans’ expulsion in 1878, Bulgaria unified. Though the Turkish army burned and destroyed most of the city, Stara Zagora rebuilt and is now one of the most prosperous cities in Bulgaria. But their more recent history has not been without stress.

Bulgaria lost support as a result of their involvement in the Balkan Wars of 1912. Because of territorial aspirations, Bulgaria declared war on Serbia and backed the Central Powers during World War I. None of this bode well and resulted in Bulgarian Tsar Ferdinand I abdicating in favor of his son Boris III. At the end of the war, Bulgaria was made to return all its occupied territories and also lost additional territories to Greece, Macedonia and Yugoslavia. Things did not improve.

By 1935, Tsar Boris took over autocratic reins and ultimately entered an alliance with Nazi Germany and Fascist Italy. Things got worse. Squeezed between the Axis Powers and Russia, Boris had few options. He attempted to do what was best for his country and its population. But, Boris mysteriously died, believed to have been poisoned by the Germans. By late 1944, Bulgaria realigned with the Allies after the Red Army entered the country. Ultimately, the Paris Peace Treaties returned some of their lost territories but Western Thrace remained with Greece (a continuing sore spot).

Thus began the Socialist era of the “People’s Republic of Bulgaria.” In November 1989, demonstrations on ecological issues were staged in Sofia and these soon broadened into a general campaign for political reform. Like many other Socialist countries of Eastern Europe, Bulgaria demanded free elections, drew up a new constitution, and struggled into the era of free speech and capitalism in 1991. Now a member of the EU, Bulgaria has become a popular destination for travelers.

The Regional History Museum chronicles the first European civilization born in Stara Zagora and the surrounding region. The museum preserves thousands of artifacts from more than eight thousand years ago to the present. There are English explanations. A prized artifact on display is the original Samara Flag, commemorating the fateful battle in defense of the city against the Ottomans in 1877. 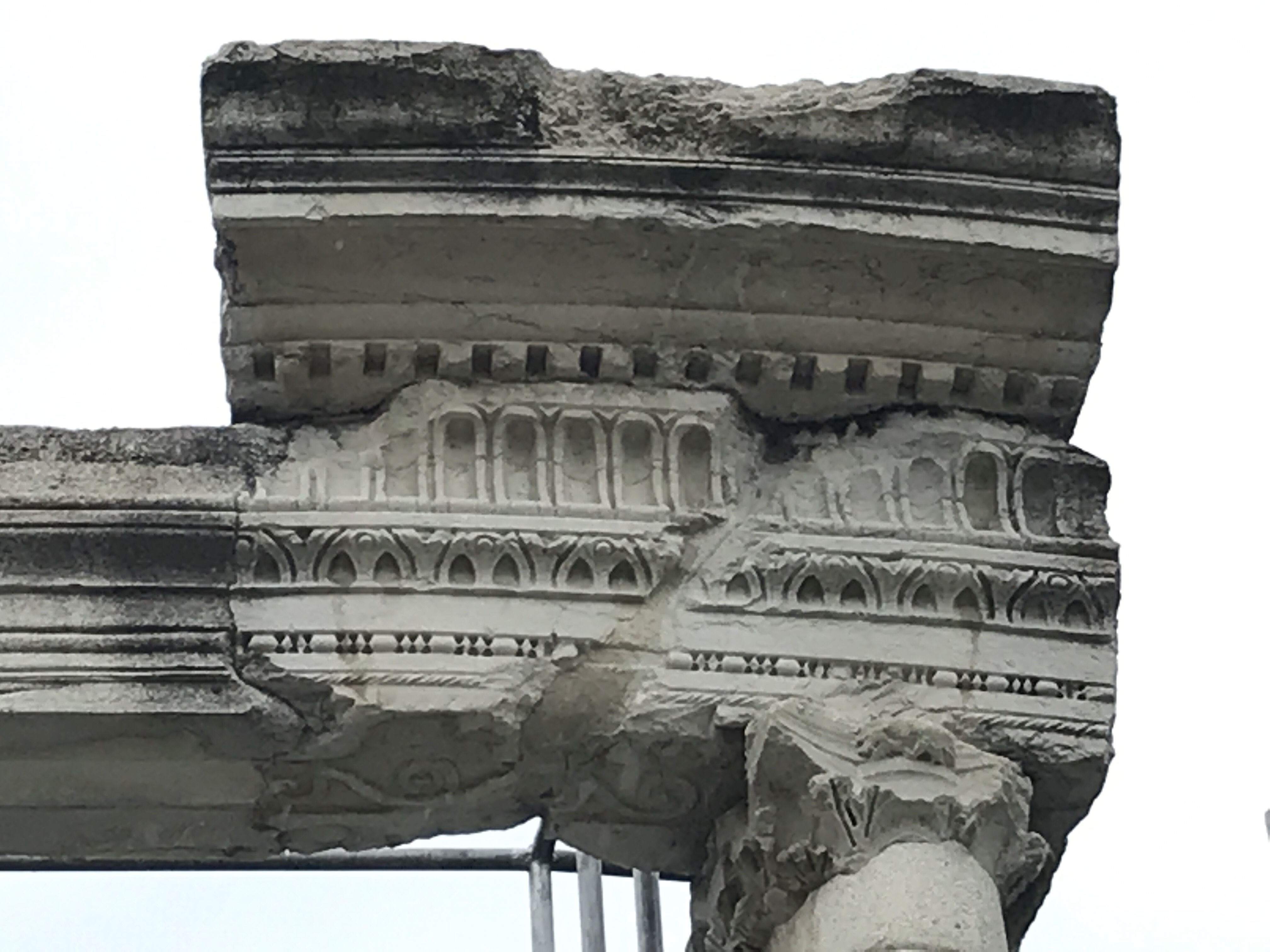 The museum itself was built over an ancient Roman street originally built by Emperor Trajan and named Augusta Traiana. One can wander among the columns and stones of what was the second largest city in Thrace Province. It’s ancient walls and columns present a nice backdrop for concerts and events. 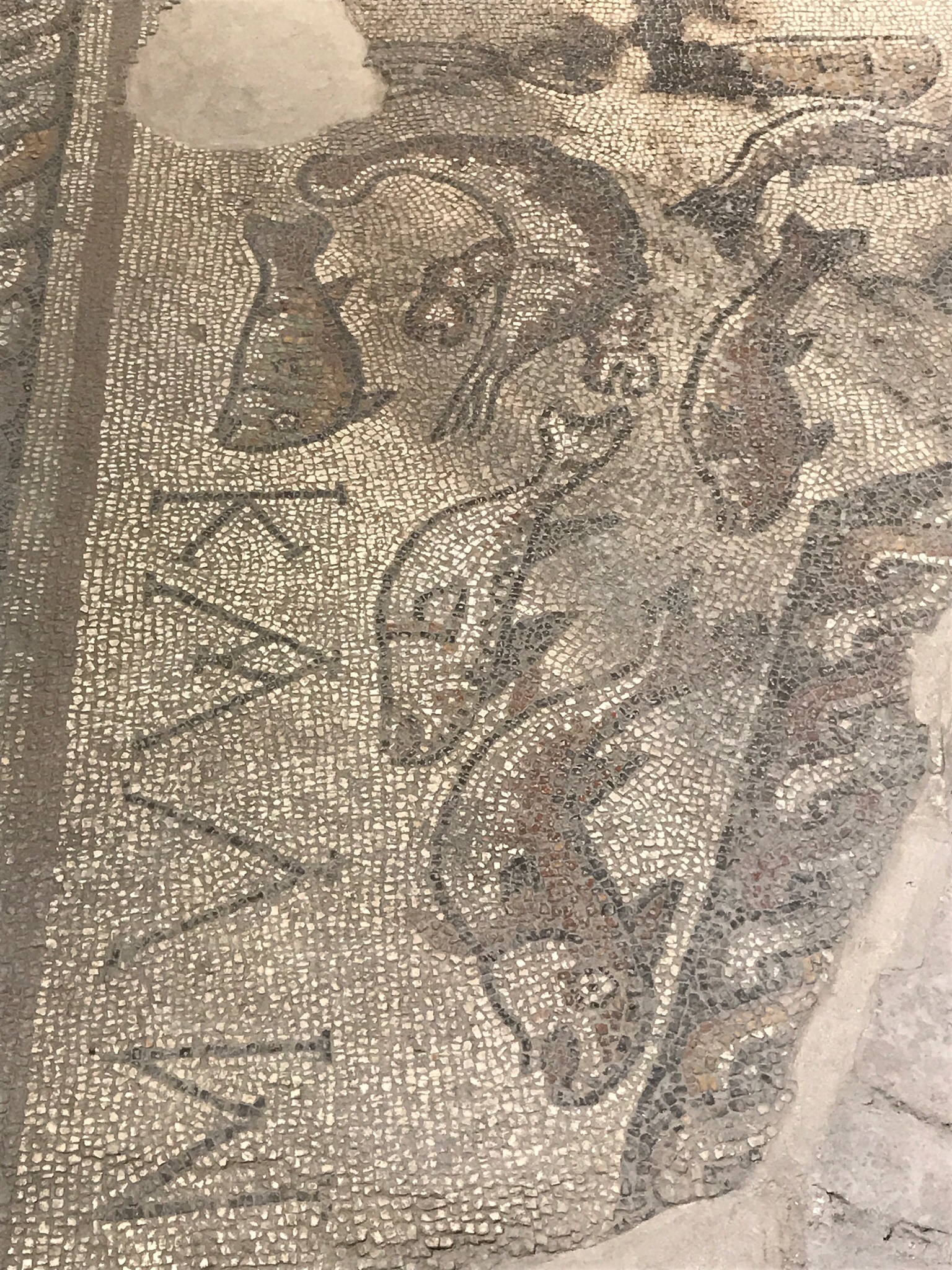 The Neolithic Dwellings Museum shelters the best-preserved Neolithic dwellings in Europe which date back to 6,000 BC. It is a little hard to find but worth the effort to reach its doors. The guide was excellent in explaining the importance of these ruins.

One of the largest Roman mosaics is found beneath the post office in what was a 3-4th century governor’s house. Roman and Neolithic ruins abound under Stara Zagora; one cannot sink a shovel without striking a stone or artifact. Many opportunities exist to visit beautiful mosaics long buried under the surface.

Also, one is able to visit a private home of a late 19th century merchant. The one I entered was a beautiful old wood structure, well furnished for the time, including ice box and eventually a tube tv.

Museum of Religions is a series of churches built on top of each other over many centuries. Starting in the early Iron Age up until today, church sites include early pagan, Christian and Muslim. Portions of frescoes of the 15th century mosque are well preserved and quite nice. 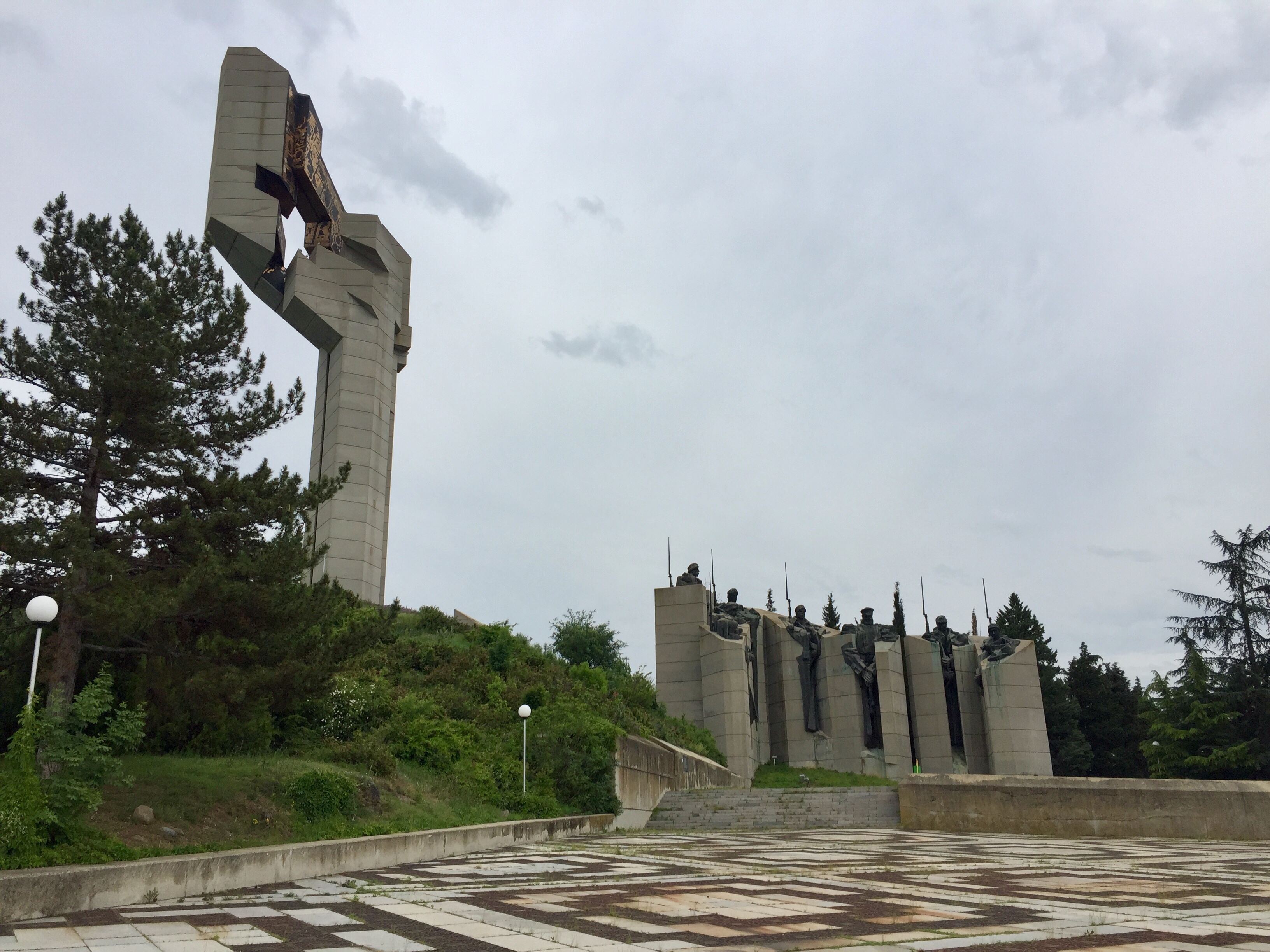 Give me a monument to visit and I am ready. The Defenders of Stara Zagora 1877 Memorial commemorates the defenders of Bulgaria against the Ottomans – a must for those who like massive Soviet-era monuments. The 160-foot Samara Flag towers over city and can be seen from almost anywhere, including my lovely balcony. The concrete and bronze monument also includes an ossuary, statues of Bulgarian volunteers and a Russian officer, and eternal flame in memory of these heroes who died in defense of Stara Zagora. The hated Ottomans burned the city to the ground but met their final fate in the nearby mountains a few months later. There is little doubt that Bulgarians are appreciative to their Russian friends for their vital assistance in throwing out the Ottomans in 1877-1878.

City Ayazmoto Park was the creation of Metropolitan Methodii Kusev at the end of 19th century. He gathered seeds from religious communities all around the world and planted them here along with different species of trees to create a very large and beautiful park with wonderful views and walks. And dangerous bikers who mowed my cousin down like a bowling pin. 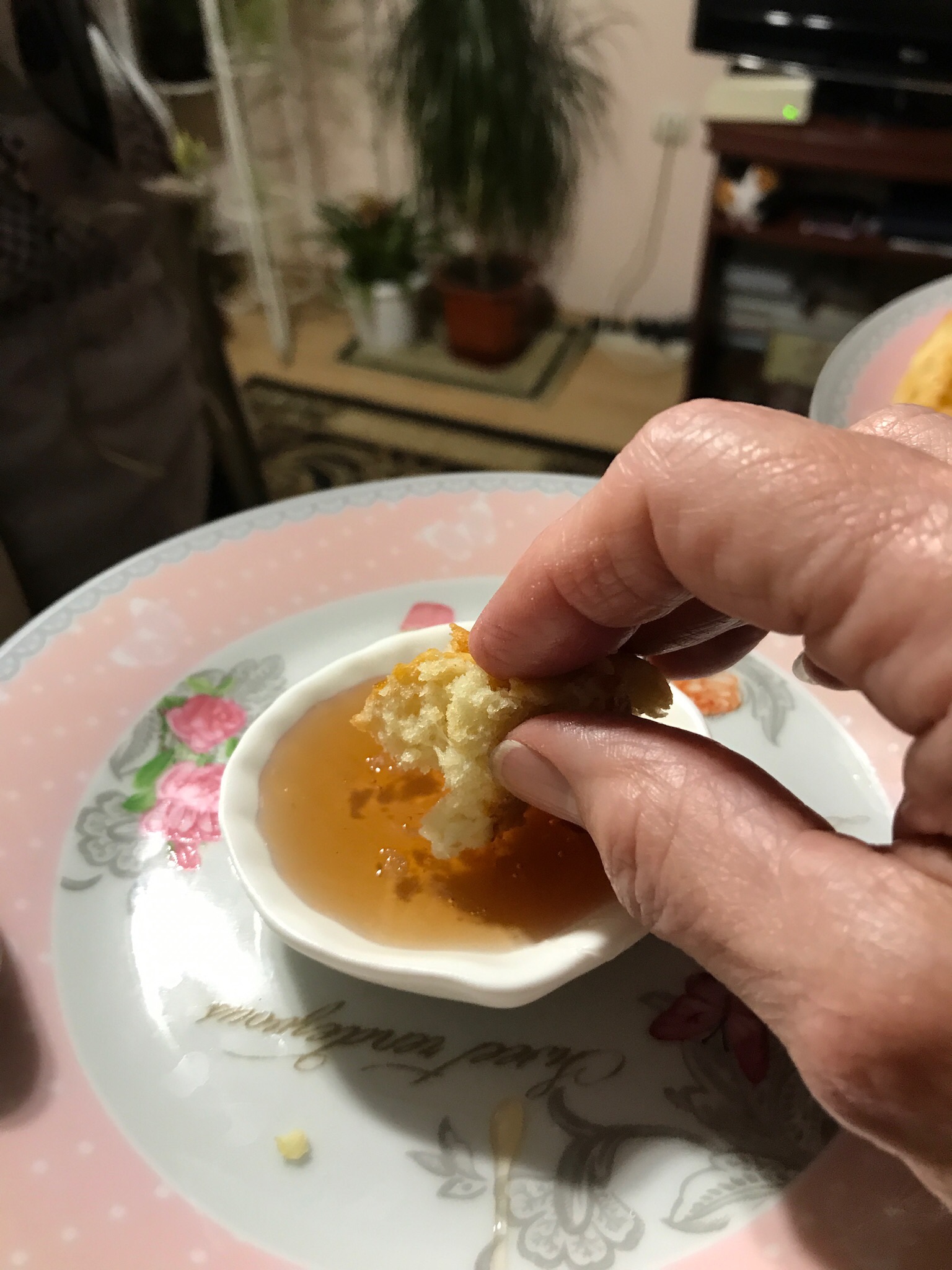 This experience encourages us to practice the traditional Bulgarian rite of “safe passage” or just plain safe walking. Mama has baked us a pita za proshtapulnik.

This is a ritual bread prepared for the first birthday of a child, encouraging her first steps. However, our experience on the steps of Ayazmoto Park convinced us we needed protection, albeit late in life. Jumping over the threshold and eating the bread with honey, one progresses safely in life. Hopefully, as Pam received skinned knees, jammed fingers and a sprained wrist. (We believe it worked as all was well after.)

Stara Zagora’s pleasant pedestrian areas, sidewalk cafes and parks make this a vibrant and interesting city. Relatively compact, somewhat hilly, friendly and fun, it is the perfect spot in which to enjoy my “roots.” 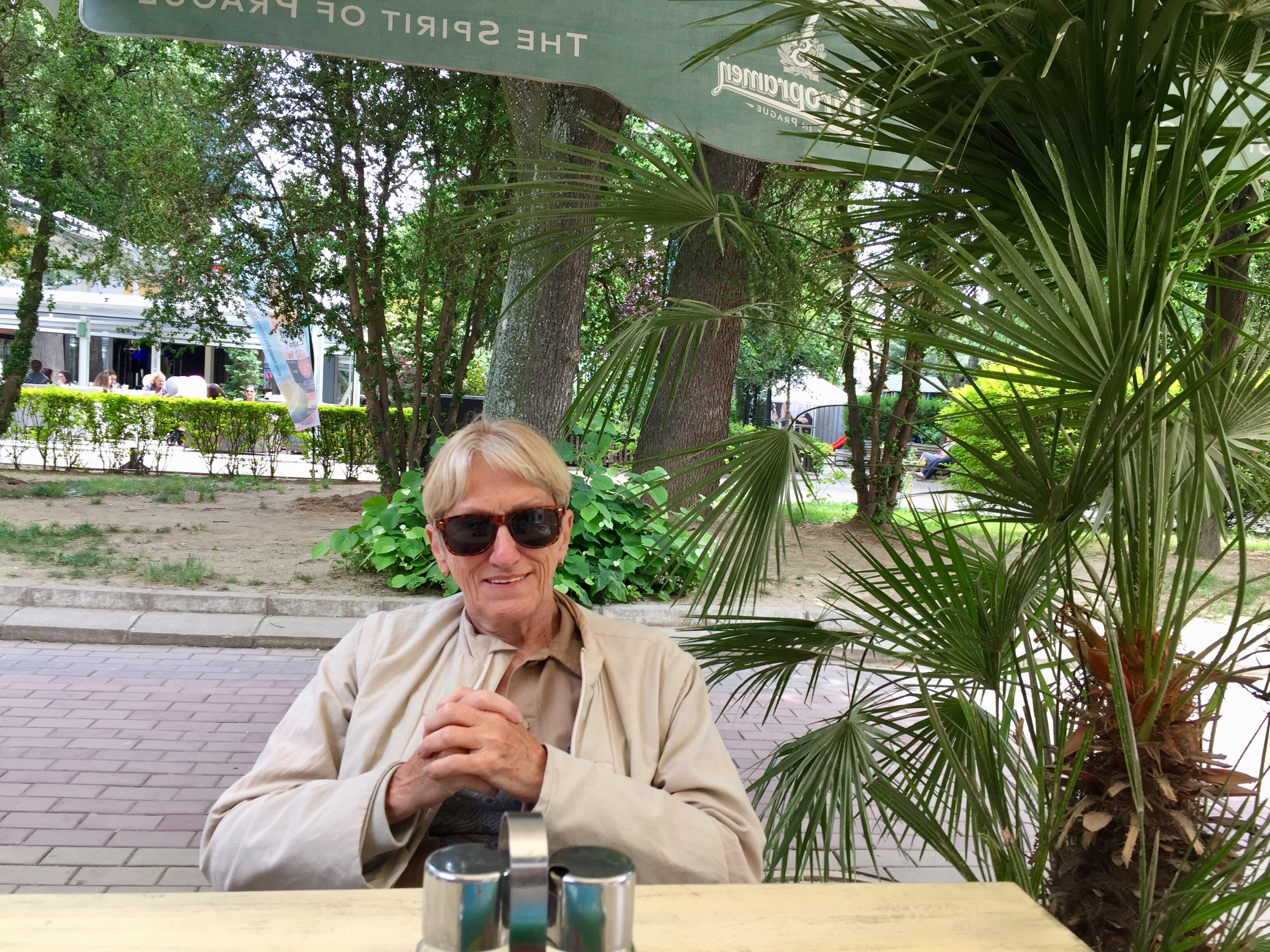 Stara Zagora is also home to Zagorka Brewery, established in 1902 but now owned by Heineken. Though their label is no longer printed in Cyrillic, the beer has not changed. Zagorka Special lager and its Fusion variants (flavored with grapes) continue to be my favorites. It is not difficult to like this beer but learning the Bulgarian word for “Cheers” is the challenge. It is a challenge I am prepare to accept.