Castles and Cities of Danube Bend

I really have no desire to leave lovely Budapest. A cafe and beer along the Danube beckons. But, for someone who loves fortresses and medieval castles, a trip to Visegrád is a must. Just 25 miles north of Budapest, at the very center of the Danube Bend, lies King Matthias’ Royal Palace. An ambassador of the Pope was visiting the King and wrote “From Visegrad, from an earthly paradise.” Well, I’m not so sure.

The Danube Bend, a long-time mystery to geologists, is more than just any bend in the twisting Danube. The Bend near Visegrád is a large, gentle U-shaped loop which is thought to have been the result of a volcanic eruption over 15 million years ago. Forming a caldera and dome, the Danube found its way around the caldera’s southern edge where it divides the Transanubian Mountains from the North Hungarian Mountains, none of which are very tall and most of which are rounded from erosion.

Above Visegrád, atop a commanding peak of the Transanubians, is the summer Royal Palace of King Matthias of Hungary (1458-1490). Visegrád was first mentioned in 1009 as a small city containing an important archdeacon. After the devastating Mongol invasions in 1242, Visegrád was rebuilt in a different location slightly further south. King Charles I of Hungary called the city home and established it as his royal seat in 1325.

There were numerous castles built and destroyed on this spot over the centuries. After the first fortification was destoyed by Mongols, an Upper Castle was constructed by King Béla in the mid 1200s. A Lower Castle was connected to the Upper Castle and includes the Solomon Tower and an interesting hexagonal tower erected in the 13th century. 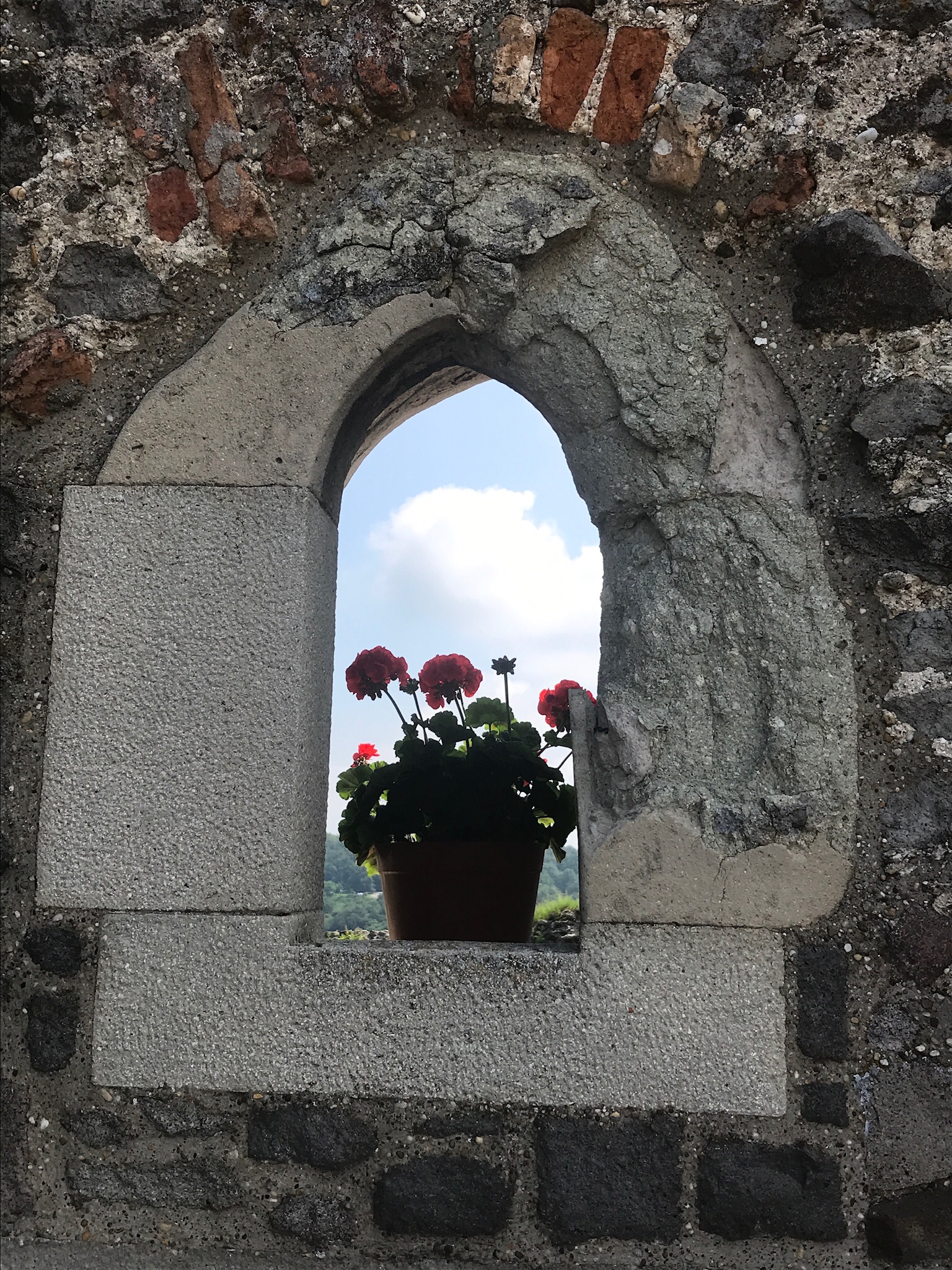 The building of a royal palace was started by King Charles I and each of his successors expanded and improved the complex. Then, not to be idle, Sigismund of Luxembourg had the majority of the earlier buildings dismantled and rebuilt, more sumptuous than before. Ultimately, this Royal Palace was the largest building in medieval Hungary (160,000 ft²) and became the official residence of the kings of Hungary until about 1405.

But the Royal Palace is mostly associated with King Matthias who between the years of 1477 and 1484, had the palace complex reconstructed in late Gothic style and was instrumental in renovating its interiors. For the first time in Europe, Italian Renaissance architecture was used for decoration outside of Italy. After the Ottoman Turks’ siege in 1544, the palace fell into ruins and by the 18th century it was buried by earth as a result of time and avalanche.

Fortunately, excavation began in 1934 and the reconstructed Royal Palace of King Matthias now houses a museum and the opportunity to roam the historic interiors and climb to the top of its terraces. The displays of wax figures is good for kids as is climbing around the walls (despite signs not to) but the displays are worn, dusty and tired. The fortress walls and watchtowers are in surprisingly good shape. The best view of all is from its terraces with the Danube Bend below and forests and rounded mountain peaks for as far as the eye can see. 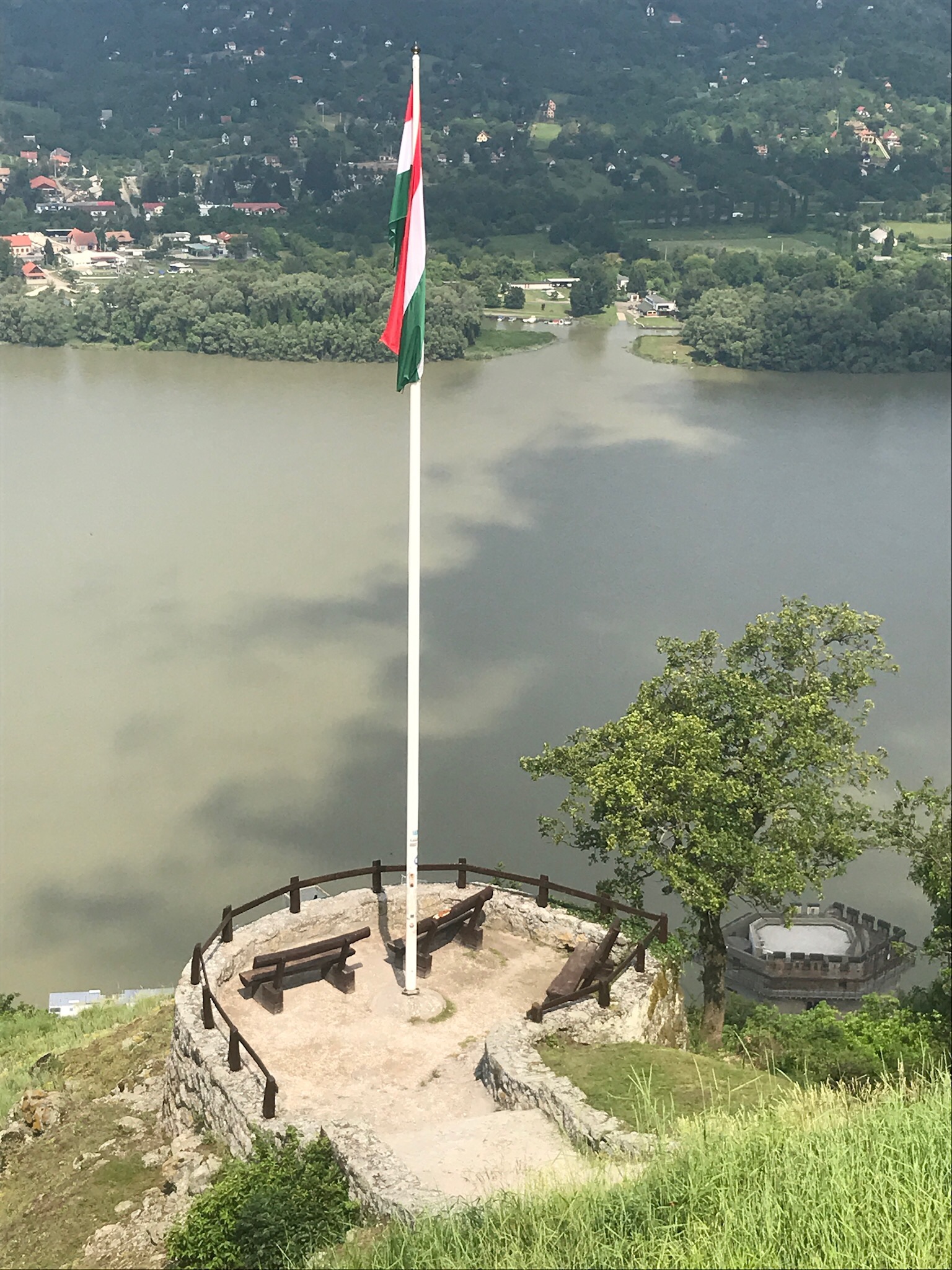 Below, the top of the hexagonal tower peeks above the trees. I am told that this was the place where King Matthias imprisoned Vlad Tepes for 13 years or so. Vlad was able to ruthlessly stave off the Ottomans but when it came to impaling the local Szeklers, the king drew the line. As Stoker’s Count Dracula explains to hapless Jonathan Harker, “We Szekelys have a right to be proud, for in our veins flows the blood of many brave races who fought as the lion fights, for lordship. Here, in the whirlpool of European races….” Though a Szekler himself, the Count didn’t care when it came to establishing his dominance. King Matthias did care so invited Vlad to join him in Budapest before shipping him off to Visegrád. Still, always the gentleman, Matthias wined and dined Vlad in the tower for over a decade. Be warned, Vlad Dracul was not the only bloodsucker on the hill. The mosquitoes are terrible! 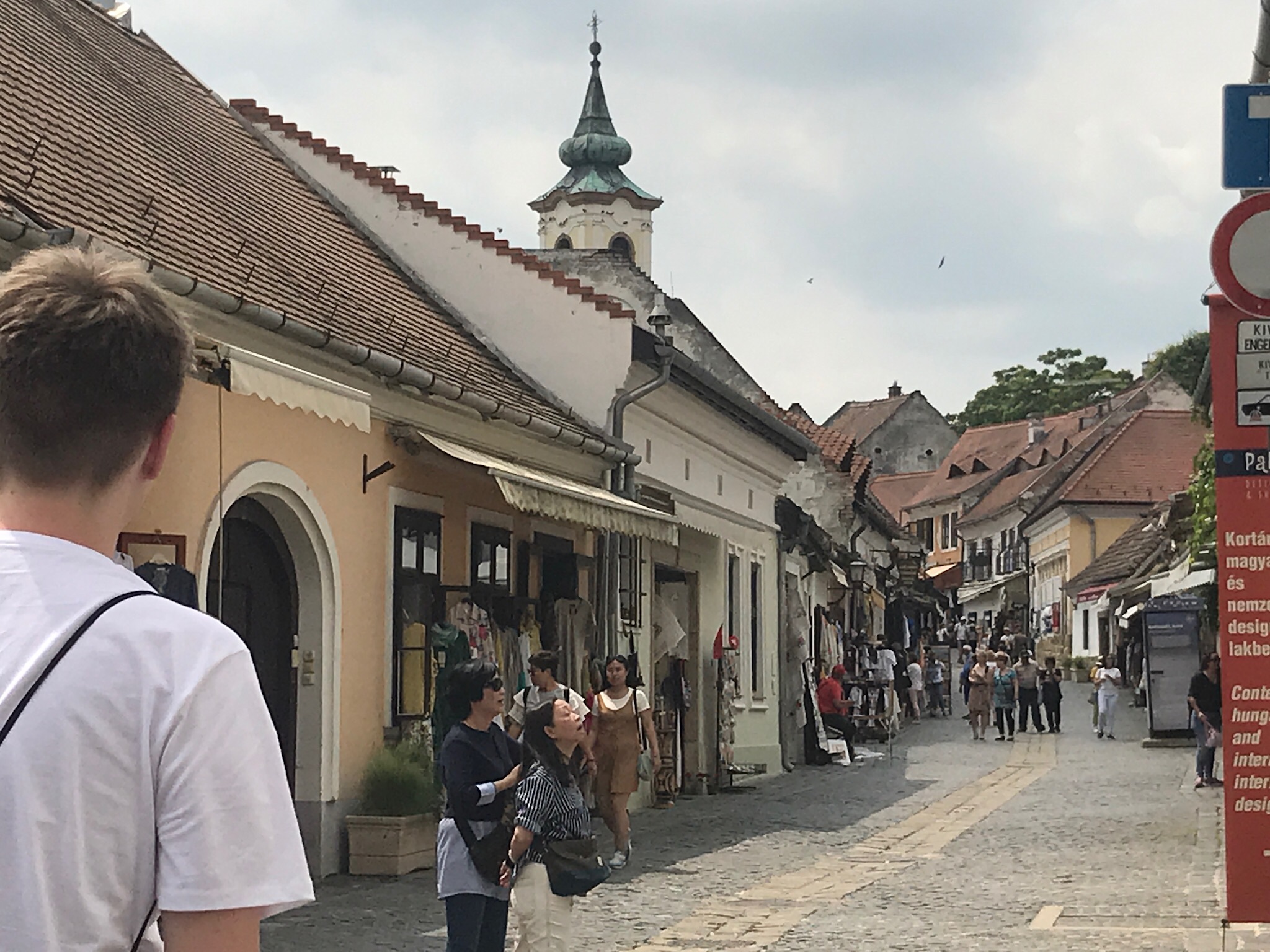 The small village of Szentendre is halfway between Visegrád and Budapest and along a branch of the Danube. It is the perfect escape from Budapest traffic because of its baroque architecture, churches, bell towers, colorful houses and narrow, cobbled alleyways. Szentendre is definitely a Hungarian city with the Magyars arriving sometime in the 9th century. The city was largely depopulated in the Ottoman era. After the Ottomans were expelled, foreign settlers moved in and much of the charm of the city today is due to these foreigners. During the Great Turkish War of 1683-1699, Serbs were invited to emigrate to Hungary, thus evading the Ottomans. Because of this invitation, masses of Serbs settled here in 1690. Today, one can see many traces of this culture preserved in the architecture that remains, though the population is 92% Magyars and only .4% Serb.

Szentendre’s “Fő tér” or Main Square, is a popular spot with cafes and more shops. Nearby is the 18th-century Serbian Orthodox Blagovestenska Church with an elaborate decor and ornate partition screen. The small church, dating from 1752, was built on the site of a wooden church from the Serbian migration of 1690. A rococo iconostasis and its paintings are quite nice. 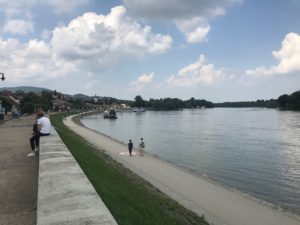 Szentendre caters a little too much to tourists with its souvenir shops and crafts stores, but overlooking this, Szentendre is also known for its museums, galleries, and its Skanzen Village open-air museum creating scenes of 18th-20th-century village & farming life – none of which were seen. For the best use of one’s time is to wander its sidestreets trying for photo ops without tourist and their selfies, avoid the endless shops selling the same Made in China stuff, then quickly head to the river for a beer or coffee. There, I may contemplate if one would have better stayed in Budapest.

This is my last night in Hungary. A farewell dinner tonight, drinks and toasts, and a sad goodbye to this part of the world. It has been a wonderful trip. Tomorrow, it is back to reality.