The sun rose twice this morning over the rocky peaks of Székelykő. The rain, for the moment, has moved north and blue sky with white clouds reign. The birds are as happy as I about this bright, sunny day. It is another one of those days when I visit places I can’t pronounce. No matter. The scenery will be spectacular, the people friendly, the food delicious, the beer refreshing and the destinations interesting. Tonight I sleep in Hungary.   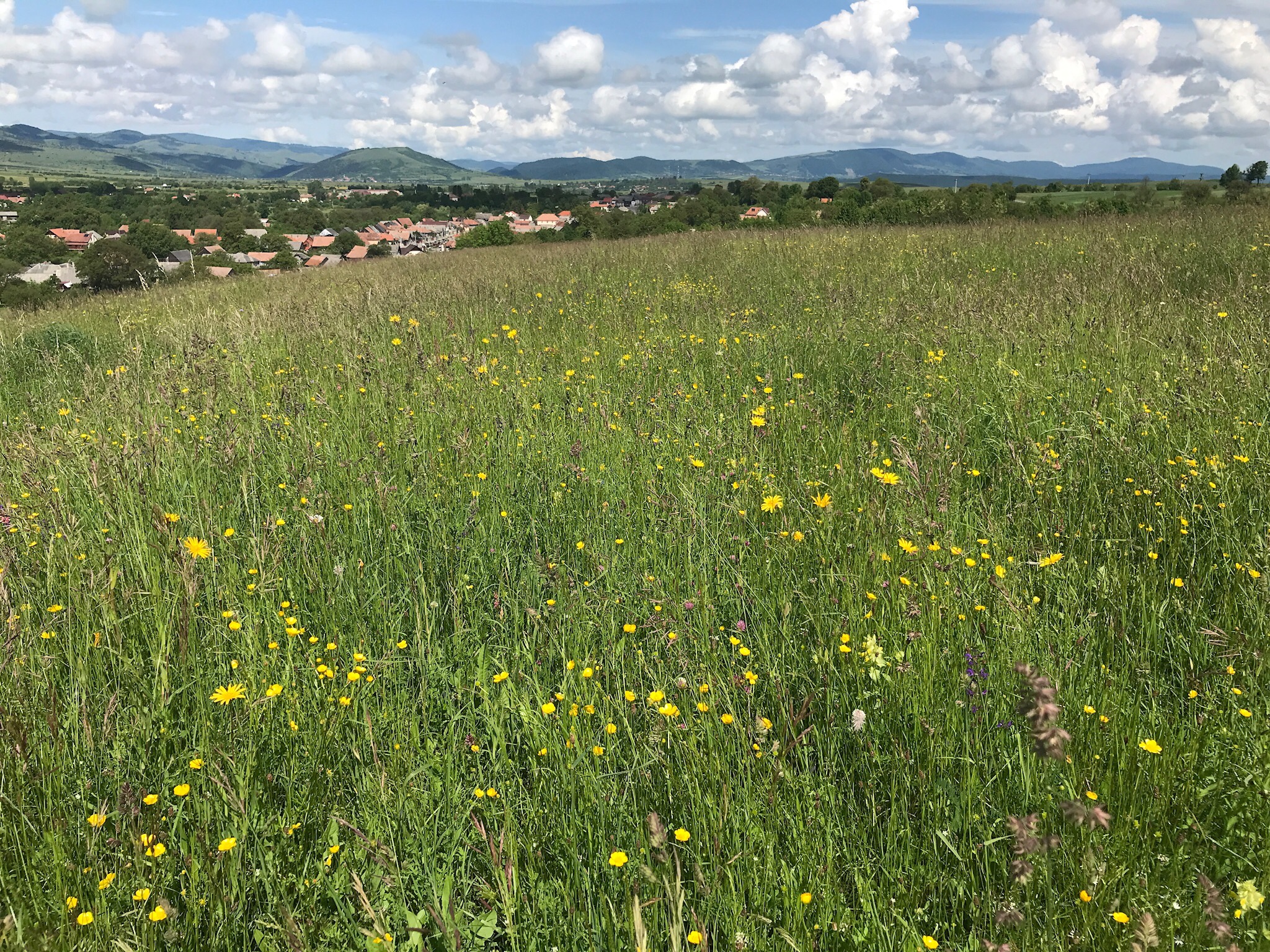 Kalotaszentkiraly is a small Romanian village in Cluj County. Supposedly, it is considered GMO-free (Genetically Modified Organisms). Explained simply, they don’t genetically mess with their food, animals or themselves. There are fewer than 900 people living here, mostly Hungarian. We stop for a photo op in a lush meadow of wildflowers above the village. The panorama of valley and distant mountains just begs for cow bells and the sound of music.

The village dates back to before 1200 when the Kalota tribe settled the land. The name Kalotaszentkiraly came from the tribe and river of the same name, and szentkiraly means “Holy King” (after King Stephen I – 1083). Probably easier to call the village by its common name of Sâncraiu, meaning Salt Lake.

We meet our guide who seems to be museum curator, restaurateur, church aficionado. The streets of the village are empty, only birds in the trees and sun in the sky. We learn that most of the village is at the church for the confirmation of several village teens. There are 40 small Hungarian villages like this one in this region and Sâncraiu is their capital center. Surviving mainly on tourism, they struggle to keep their traditions alive. 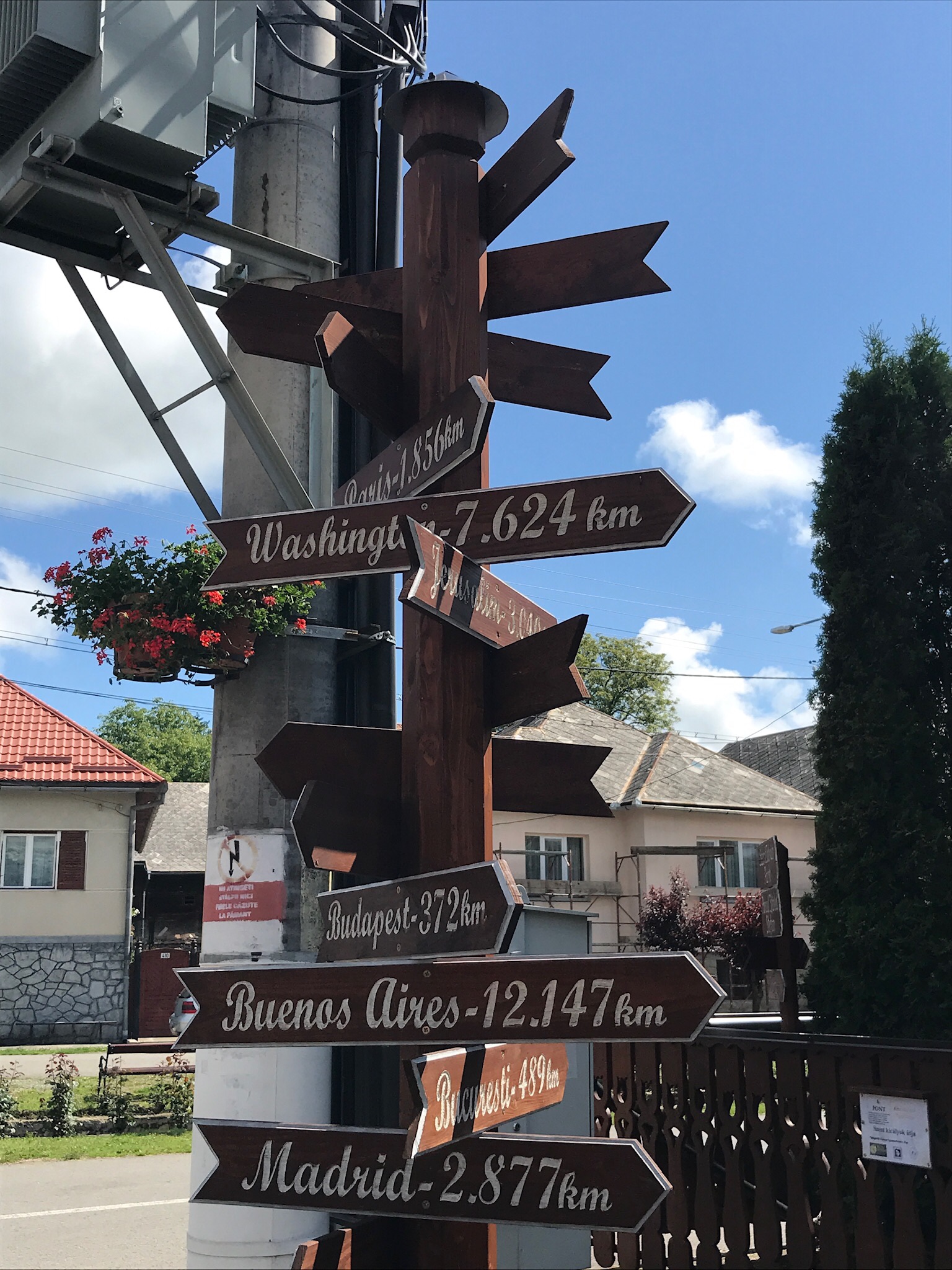 The village has several churches and cafes, but today is Sunday and the town eerily quiet. A corner sign points to London 2,083 km, Buenos Aires 12,147 km, and Washington 7,624 km, but Budapest is just 372 km and here in the village it is Hungarian to its core. Sâncraiu is one of the best-known original ethnic villages of Western Transylvania and known for its folk and native culture.

We are guided through a home turned museum filled with the furniture, photos, pottery, dinnerware, crafts, and a myriad of tools for the preparation of food. Displays include a weaving loom for making rag rugs; bright, floral pillows and table cloths; intricate woodcarvings and embroidery; and wonderful costumes for men and women of all ages. I always hesitate to call these clothes costumes as we can see this same clothing being worn by people in the streets. To them, this traditional clothing is everyday clothing.

An example of this occurs when, following the church service, the street fills with people who attended the confirmation of several boys and girls of the village. Each teenager is dressed in the colorful, embroidered dress and hats that probably were worn by his or her parents and grandparents when they were confirmed at the same church. Flowers are everywhere and photos are endless as the party for each is held in area restaurants.

After the service, we walk across the street for a tour of the Calvinist Hungarian Reformed Church or “Magyar Sincraiu.” It is an exquisite, plain white medieval church which just celebrated its 502nd year and is surrounded by a small wall with wonderful wood-carved gates. Unfortunately, there has been many occurrences of unrest and invasion, and the entire village and church were burned in the revolution of 1848. However, the building was restored in 1850. It was at that time that it replaced its gothic roof and interior with a flat, painted tile ceiling.

The simple stone building is adorned with a large square bell tower topped with a tall, carved wood steeple and small mini-towers. The tower was built in 1762 and has three bells. All is surrounded by pleasant gardens where the oldest bell, from 1481, is on display (with a locked-in-place clapper because tourist couldn’t resist ringing it and scaring villagers who thought there was a fire or emergency). Inside, the flat ceiling consists of 220 square painted motifs of florals and geometric designs, tulips being most popular. The use of the tulip design, a flower unknown here, originated from Central Asia. The organ was built in 1876. A wood-carved crown canopy with eagle, seen above the pulpit, was given to the church by Hungary’s Foreign Minister. 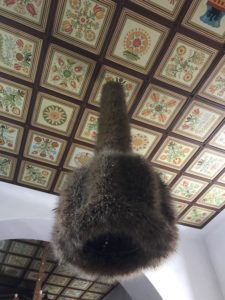 However, the most unusual object in the church, hanging prominently from the center of the ceiling, is what I first thought of as a ‘big furry hat.’ The unique fixture is in the shape of a very large bell and made from wheat. The bell of grain is meant to symbolize fertility. Though this bell was made in 1930, most are replaced every few decades. All churches in this region hosts a wheat bell of fertility.

After lunch, the friendly village cat, photo ops, and the usual toasts of potent plum brandy offered to guests in thimbleful glasses and tasting better everyday, our van departs for the west. I sadly am departing both Transylvania and Romania, this changeable, schizophrenic historical region that was Hungarian, Romanian, Tatar, Hungarian, Russian, Romanian, Hungarian and just spectacular Transylvania in any language.

We cross the Bucea Pass at King’s Pass in a brutal rain storm. One would think our crazy, rocking carriage of many horsepower was fleeing from the wolves and forest superstitions much as Jonathan Harker did centuries ago. Looking out at the endless green of forests and meadows and swift brown rivers bubbling and tumbling downhill, lightening briefly brightens the sky and thunder rumbles and echoes across the mountains.

King’s Pass really isn’t much a pass in altitude, just 1860 feet, but it signals our exit from the mountains of western Transylvania onto the great plateau of western Romania. This fertile region stretches from western Romania and eastern Hungary as far as Serbia, Slovenia and through the Danube Delta serving up a bread basket of foods. The people should never go hungry. Nor does the region want for water as rivers are filled to flood levels and buckets-full are still raining down.

This fertile land is as rich as its history. Again I am reminded how often over the centuries these farms and villages changed hands. Perhaps the villagers had different taskmasters, but most clung stubbornly to the roots of their culture, language and traditions.

We descend to only about 300 feet above sea level to arrive in the large city of Oradea. With the 1538 Peace of Várad between the Holy Roman Emperor Ferdinand I and the King of Hungary, this territory was ceded to Hungary. Which is why they still refer to Oradea as Nagyvárad. After WWI, it passed into the territories of Romania. Though recovered by Hungary in 1940, with the help of Germany, after WW2 the land was again relinquish to Romania. The city remains about 73% Romanian in ethnicity. 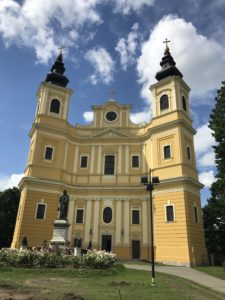 In Oradea is one of the most gorgeous Baroque churches in all of Central Europe. Oradea itself is quite large and contains some beautiful squares and wonderful Art Nouveau architecture, my favorite. The first mention of the city was as early as 1113 as Varadinum, meaning fortress, which it also has. I like the looks of this city a lot. However, our destination is the baroque Catholic church.

In the 11th century Saint King Ladislaus I of Hungary (the one whose sword was to cleave out the Turda Gorge) founded a diocese here. The city prospered in spite of attacks by Mongols and Turks. Destroyed and rebuilt, the existing baroque-style Roman Catholic Cathedral opened in 1780. The basilica goes by many names, such as St. Mary or Cathedral of the Assumption, but it is best known because it is the burial place for the sainted King Ladislaus and supposedly the cleaving axe is also on display. 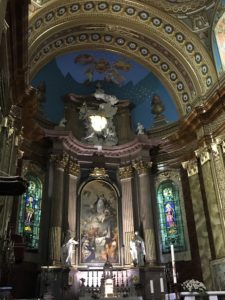 The exterior of the cathedral is a simple double towered gothic façade of golds. Entering the cathedral, I have to agree it is an inspiring moment. I always take a moment to look up, for ceilings and domes tell a lot about the sumptuousness of a building. This one does not disappoint. The vaulted ceiling and painted murals are lit by rows of windows. The dome is soaring with beautifully painted scenes of the assumption. The faux marble walls are ornamented with square columns topped with stylized ionic carvings of gold. The overall tone is one of vibrant blues and golds. Marble altars, crystal chandeliers, multiple massive organs and carved choir seats combine to create a beautiful cathedral. Most of the decorations came from Austria.

However, what is most important for Catholics is that the cathedral is the burial place for the sacred remains of Hungarian King, St. Ladislaus. (Actually, the treasury only houses a fragment of his skull.) And in a corner, the axe that with one swipe created Turda Gorge.

We board our van and drive just 8 miles to the 21st century border between Romania and Hungary. Just beyond the sweet little town of Bors, we reach the Ártánd Border Crossing. It is smooth going and before we know it, we are leaving the Children of the Night behind and motoring through the flat, green countryside to another village I can’t pronounce. For our Hungarian guide, the names flow from his tongue like warm nectar to the gods.

We are lodging overnight in Hajdúszoboszló. A positive change is there’ll be no further schizophrenic confusion over place names. It is all Hungarian from here on out.