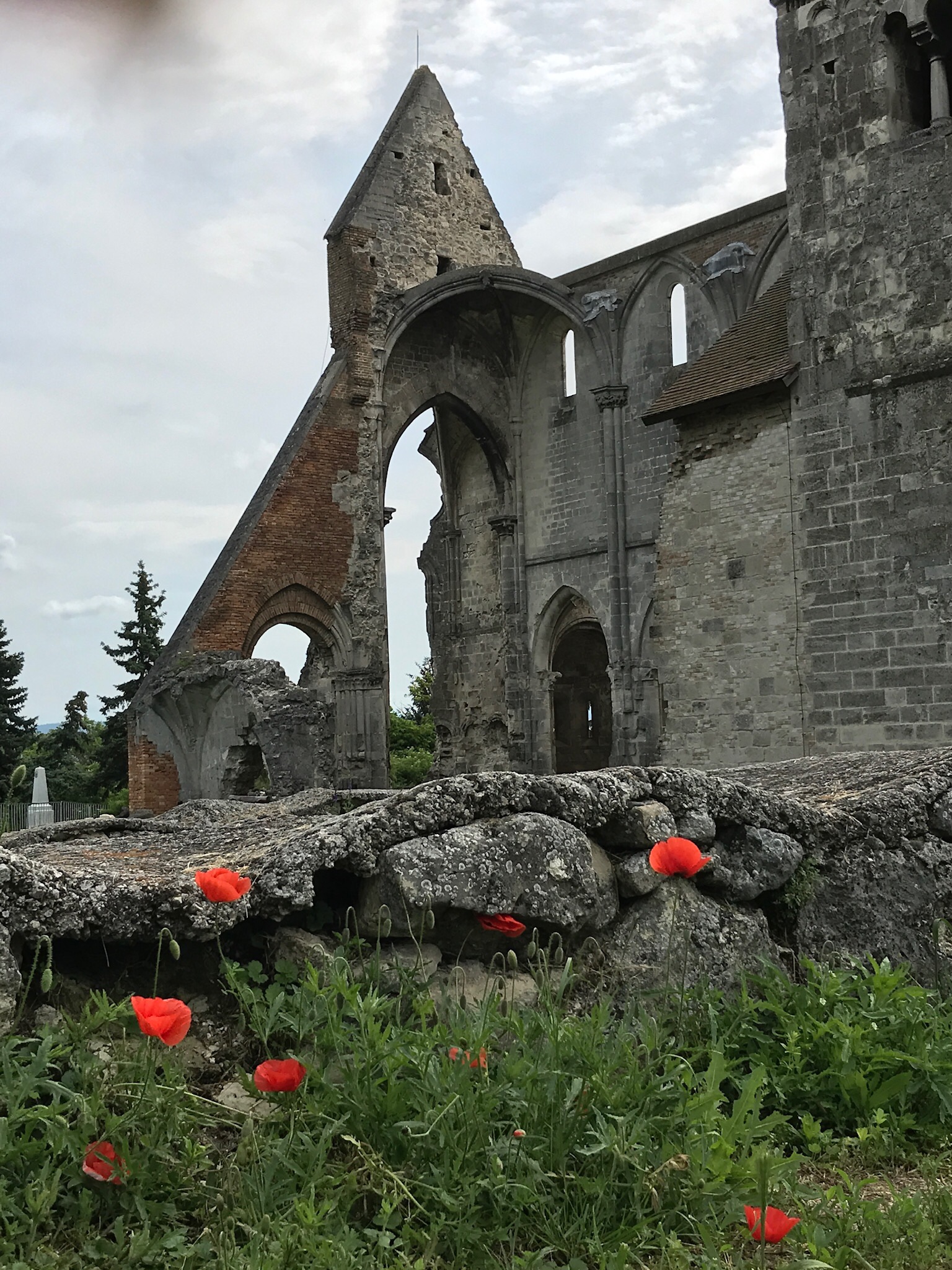 A day trip in Magyarország (translate as Hungary) takes me east of Budapest to the small town of Zsámbék. Zsámbék has been inhabited since Paleolithic times when stone tools were first used. It has been home to Celtic, Roman and Avar peoples and is an archeologist’s dream. Churches have been built and destroyed in this city since 1180. King Matthias’ son had a fortress here in 1467. Turks and an 1764 earthquake laid the city and buildings to ruins. However, German settlers arrived after the Turks and rebuilt Zsámbék and its churches using the original stones of the ruined settlement. It is less the rebuilt settlement than the strikingly beautiful church ruins that capture my attention.

Atop a hill above the village, in a meadow of stones and red poppies, are the remaining ruins of Zsámbéki Öregtemplom. A Romanesque basilica begun in 1220, it was originally a Premonstratensian monastery, an Order of Canons called the White Canons because of the color of their habit. It began as a private family church built by the wealthy Aynards family. By the late 1300s the Aynards fell out of favor with the king and their property was confiscated. Property was passed along from family to family, according to the whims of the Hungarian king. Then the church was destroyed by an earthquake in 1736. What is left are bell towers, buttresses and walls, all beautifully silhouetted against an angry sky. 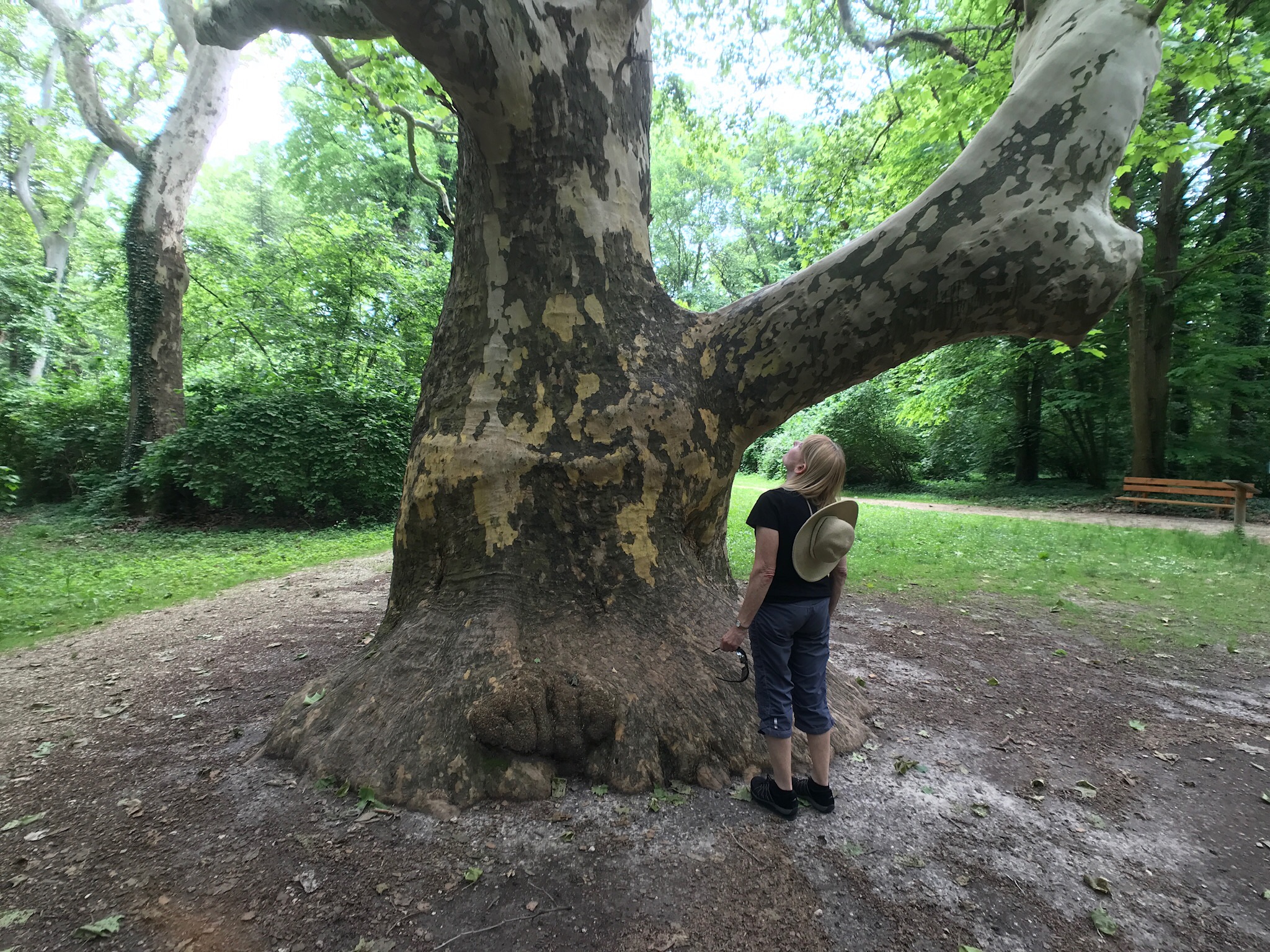 Woman does not thrive by medieval ruins alone. Our botany-loving guide takes us to the Alcsúti Arboretum Nature Reserve where a guide walks us through the park. This 98-acre park was founded in 1820 and was originally part of the private park of the Hapsburgs. The Hapsburgs had a classicist-style palace erected surrounded by a magnificent park designed by the master gardener for Austria’s Schönbrunn. Hundreds of exotic and indigenous species of plants were obtained from around the world. While most buidings were destroyed in WW II, a chapel remains and used quite often. The large palace was burned in 1944; in 1952 any remains were destroyed with its stones being used to rebuild the village. What remains is a solitary wall of the palace façade – a perfect subject for the photographer or backdrop for a yearly rock concert.

The botanical gardens have trails that weave among over 540 tree and bush species. There can be a plethora of flowers; however, we are too late for the magnificent snowdrop display and too early for the firefly bonanza. We are not too early or too late, but just right for the hoards of vicious mosquitos looking for prey. The bridges, ponds, fountains, and trails are peaceful and refreshing. It would be hard to decide when this park would be the most beautiful but I would guess it would be autumn as copper beech, sycamores, weeping beech, and maples display their fall colors among the numerous fir, redwoods and pines. Or perhaps winter when the friggin’ mosquitoes are all dead! 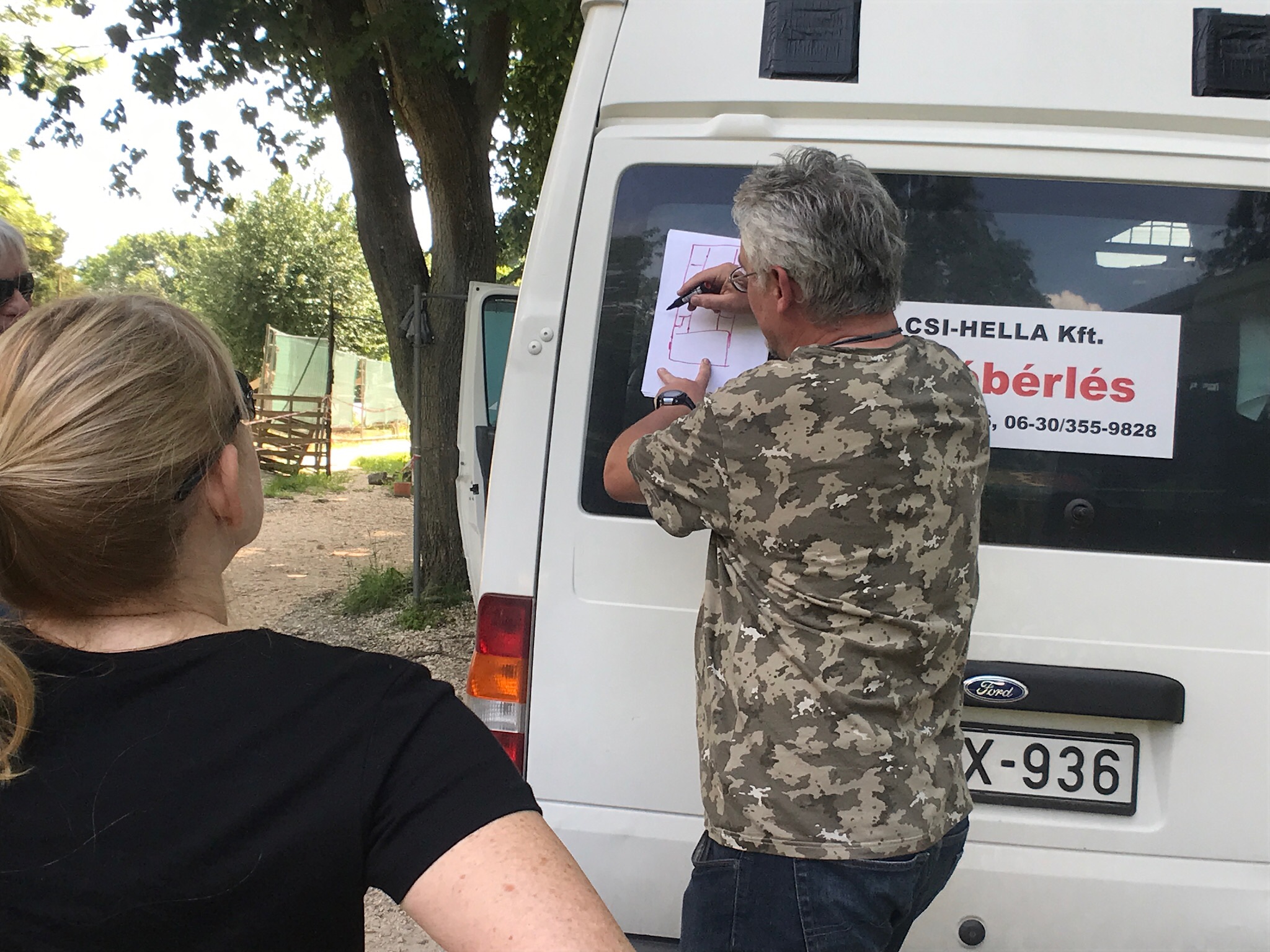 Our stop in the afternoon, and a few miles further east, is the small city of Tatabánya and the historic 18th century Kamalduli Hermitage in the even-smaller village of Majk. Unfortunately, renovations going on in the area prevents us from seeing the buildings. Our guide does an admirable attempt to explain using ancient tools of pen and paper.

The Kamandul Order was established in 1009 in Italy, and the monks/hermits were allowed to speak to each other only twice a year. This particular monastery, surrounded by 32 acres of walled woods and lakes, has existed for over 250 years. Though the white-dressed monks only lived here for about 50 years, the Hermitage complex has survived. It consists of 17 detached cell-houses and the remaining tower of the church. The cell-houses consisted of a separate chapel, a living/dining area, a kitchen. The kitchen garden had just the same size ground-space as the cell-house. The monk lived in silence here for all his life, speaking to others twice each year. If he was ill, he could light a candle in the window and someone would come to his aide.

Monks only lived at this secluded spot from 1733-1770, when it was converted into a hunting lodge for the extremely wealthy Esterházy family. Since the early 17th century, the Esterházy were among the greatest landowners of the Kingdom of Hungary during the time of the Habsburgs, which essentially got them vast privileges when it came to taking over monasteries and such.

The Esterházy were one of two princely families of Hungary. Their real estate holdings included numerous palaces and vast estates of land. Their wealth and influence was ultimately curtailed by the arrival of the communist after the Second World War. While they were able to transfer some wealth out of the country, all their properties had to be abandoned. Much of their priceless art and furniture ended up adorning a villager’s home. Many palaces were converted for the peoples’ common use. One aristocratic Esterházy, arrested and in-prisoned, cleaned toilets for eight years. Rumor is he did a noble job before being released and traveling to Austria to resume a comfortable life. 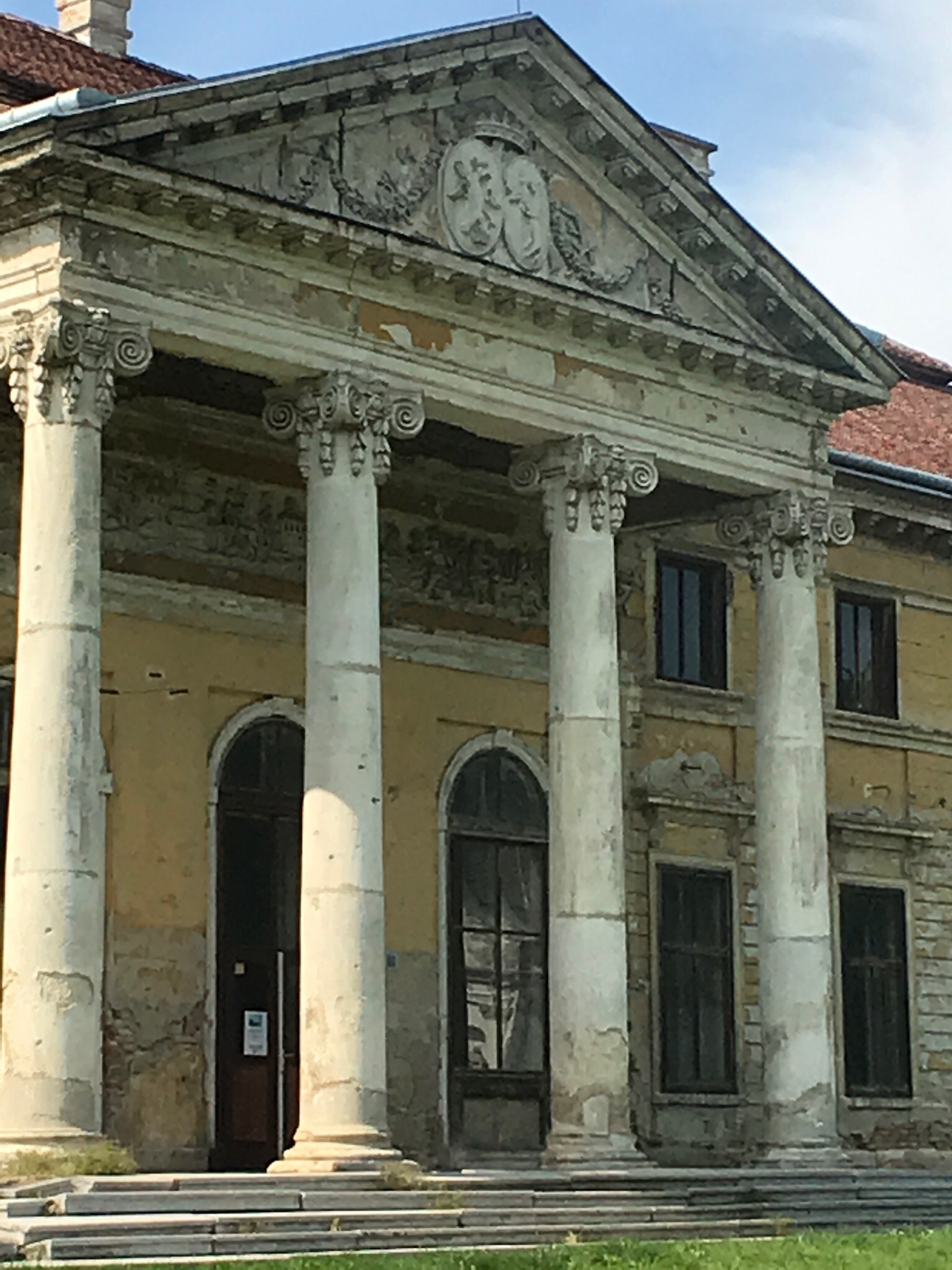 A short drive south through small villages and along narrow roads is the Cziráky Mansion in Lovasberény. The castle was also abandoned after the arrival of the communist and is but a shell of its past days of glory. But  walking its yard and peeking through windows at abandoned rooms and passageways paints a good picture of how this castle was once beautiful. The crumbling façade has beautiful ionic columns with a carved frieze. Everything, supposedly, paid for and built by the harassed villagers.

Cziráky was the first mansion built by the Pálffy family in the 16th century. This is the same wealthy Austro-Hungarian family who built the wonderful Pálffy Palace in Bratislava. The same noble family that produced Imperial Field Marshals, Knights of the Golden Fleece, favorites of the Habsburg monarchy, and topped it off in the 1940s with Fidél Pálffy who was an ardent supporter of Nazism in Hungary.

The marriage of Pálffy with the surrounding village of Lovasberény was a rocky one. He later sold the village to a Catholic general who punished and fined his Protestant villagers. The Czirárky family bought the village in 1730 and transformed the mansion into their main residence, expanding and decorating it with more rooms and another floor. Still too cramped for space, in 1830 Count Czirárky added a wing dedicated to guests of the family. All for naught as the family’s aristocratic stature and political proclivities did not sit well with the communists after WW2. They nationalized the mansion, used it as a hospital but did nothing to preserve the building or its tiny church. The neglect then total abandonment shows. This stately home and at least 100 others just like it are silently waiting for an investor with a large influx of money to change its dreary fate. 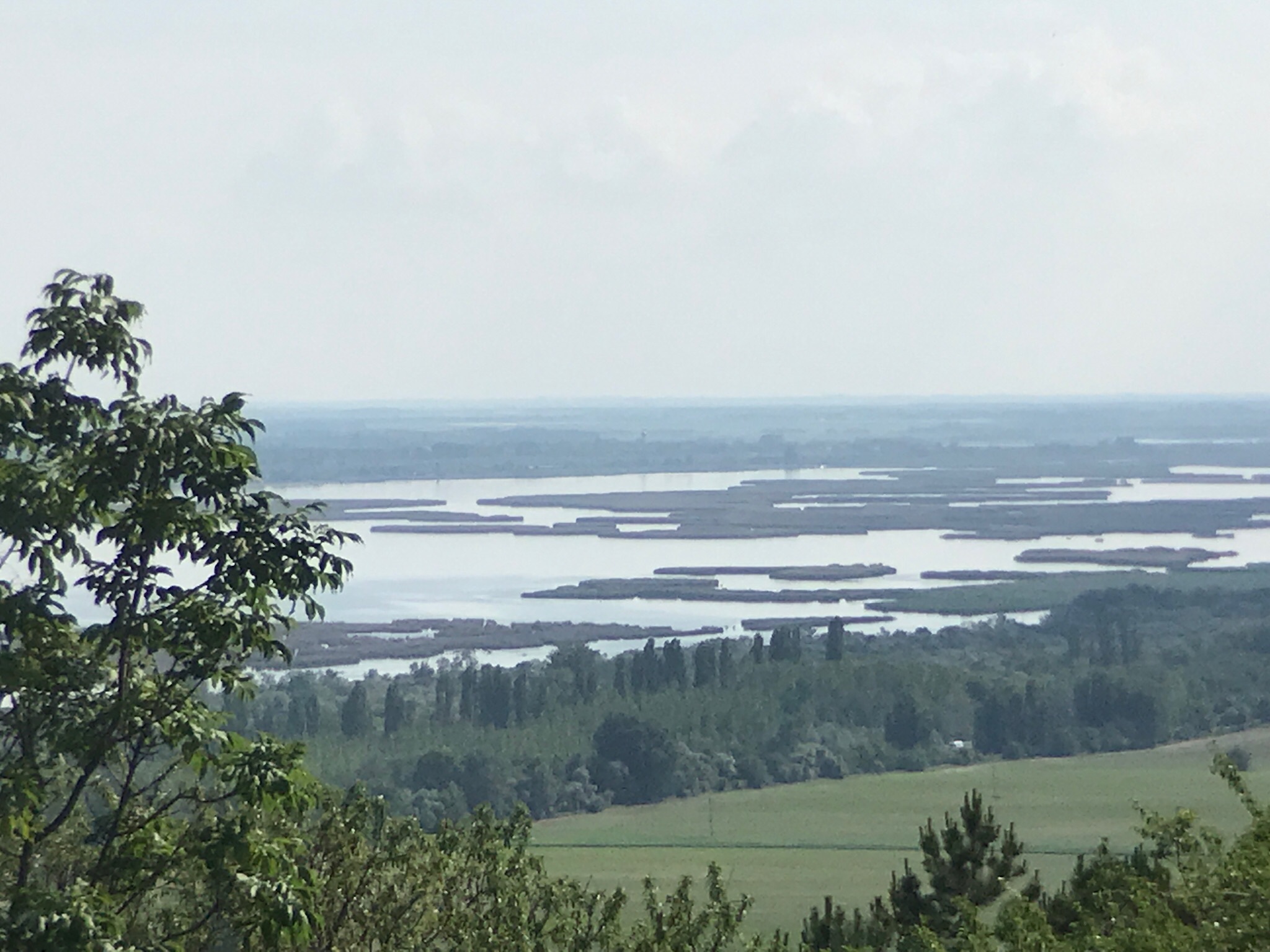 The panoramic view over Lake Velence, Hungary’s second largest lake, discloses a vast area of marshlands and reed-covered islands that must be a duck’s dream. The 10 sq. mile freshwater lake is quite shallow with an average depth of just 5’3”, meaning in summer I could walk across the lake and still have my head above water. Temperatures of the water in summer can reach bath water temps at 82 degrees. It is ideal feeding grounds for the numerous bird populations, including ducks, geese and swan. The lake will also host the World Rowing Masters Regatta in the fall of 2019. 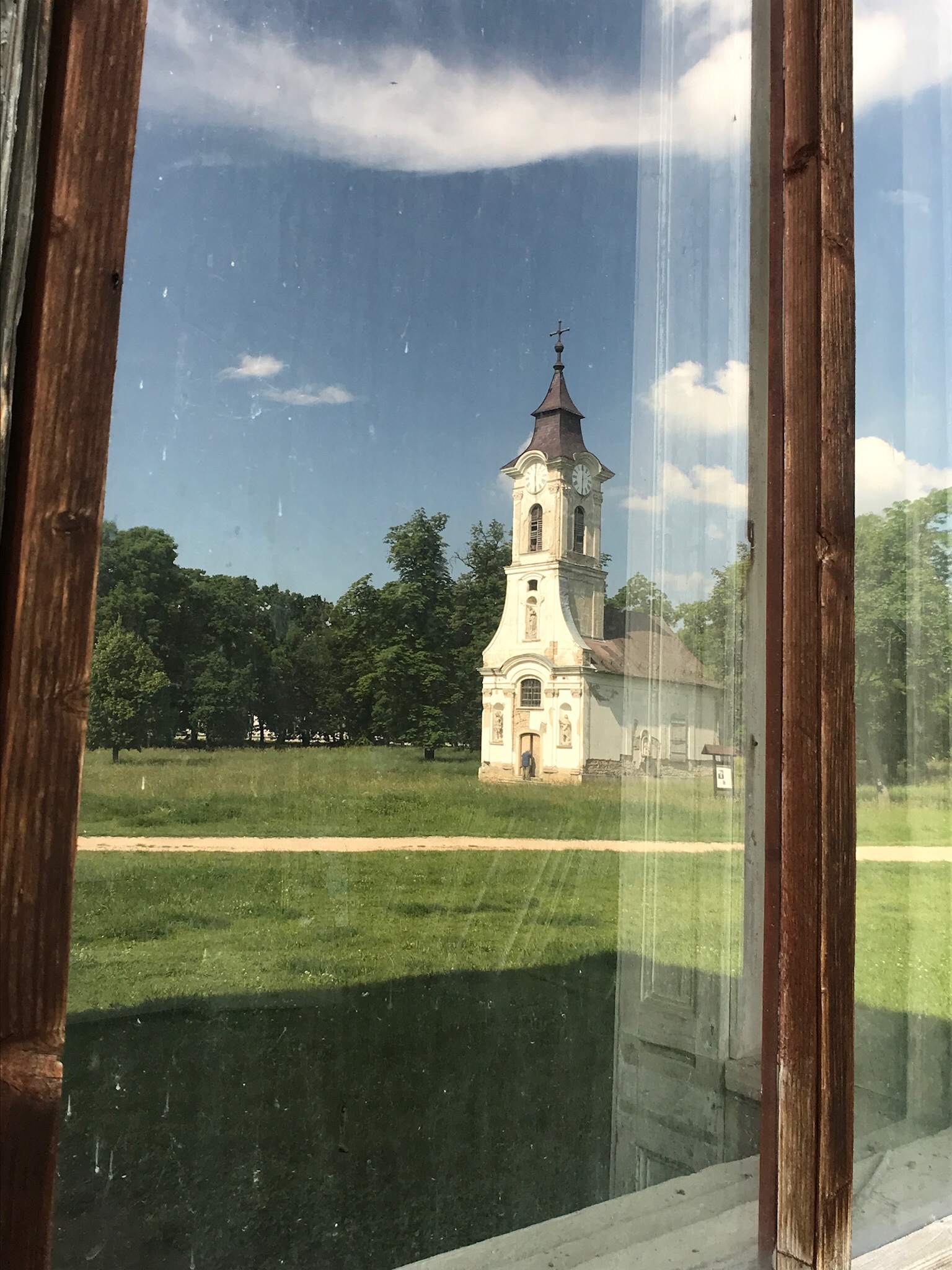 The stately ruins of Hungary’s churches and palaces are hauntingly beautiful. They not only tell the history of this country, these ruins excite the imagination. Restoring the palaces to their earlier magnificence would be a labor of love. However, some ruins are best left alone to stand as silent reminders, their beauty found in the shapes and textures of a grand past.

The sigh of History rises over ruins…. – Sir Derek Walcott