I graduated from Purdue University a history major. Yet, what I know of the Balkans could be counted on one hand 1) where it is 2) Tito lived there 3) Milošević was there 4) the Saracens, Mongols, Huns, Manichæans, Romans, Byzantines, Christian Crusades, Venetians, Ottoman Turks, Napoleon, Italians, Austrians, Hungarians, Nazis and Communists sacked and pillaged at their pleasure over the centuries, and 5) if Franz Ferdinand had stayed home instead of traveling to Sarajevo in 1914, the world could have waited a little longer before plunging into World War One. Therefore, my goal before I dock there in May is to read as much as possible and arrive less ignorant.  If I offend any Croat or Serb in this process, it is out of my ignorance, not out of my efforts to understand a complex situation.

First lesson: I will be meeting Southern Slavs who see themselves as Serbs (Orthodox) or Croats (Catholics) or Muslims or Jews and these people in turn see themselves as Serbian, Croatian, Bosnian, Montenegrin or Slovenian. Therefore one can be a Croatian Serb, another a Croatian Croat. Both are Slavs. To both, being a Serb or a Croat was the justification for the unrest, distrust, and hatreds that led to civil war and mass atrocities. Both Croats and Serbs are currently on trial as war criminals in The Hague.

Western observers over the past century, humanitarian or otherwise, sought who to blame but appeared to miss the horrid hypothesis that everybody was ill-treating everybody else. As Rebecca West wrote in 1939, they returned with “a pet Balkan people…suffering and innocent, eternally the massacree and never the massacrer.” And measuring what was witnessed by what the West enjoyed, as if others had nothing with which to compare.

Each subset of Balkan people perpetually seemed to make charges of inhumanity against all the others and never seemed to unite against the true enemy. Except possibly in the early 1400s. It is written that if it had not been for the Balkan Slavs, Western Europe would look very different today. More Mosques and minarets would dot Vienna’s skyline. The Slavs stopped the Turk’s advance into the West and learned to live with the Ottomans, and vice versa.

I love travel because it gives me an opportunity to see we are not as rich in the West as we think. We lack much that others have in quantity. Go beyond materialism and words on paper meaning little to a large portion of our population. Look for a social system that gives a culture character, strength, meaning, and pride. What are we failing to learn here in the West? Does our culture exclude learning from others?

Second lesson: The intolerance of the Papacy did not endear the Vatican to the Slavs. Does blame rest with the Roman Catholic Church’s policies during the first half of 20th century? The 1929 Concordat between the Church and Mussolini left Slavs outside the protection of the church. The 1937 Concordat between the Church and Yugoslavia’s government allowed, among other injustices to the minority Serbs of a particular area, only the Roman Catholic Church to run the schools; children, regardless if one parent was Orthodox, had to be raised Catholic (in spite of parents’ wishes). Even though the Concordat was abandoned in 1938 because of Serb opposition, it was entirely the project of the Vatican and reflected on the Croats.

Following bad advice from their own leaders, Croats would not get involved in Yugoslavia’s government in Belgrade, after which they just weren’t asked.  “Here nothing matters except the Croat-Serb situation. And that never seems to get any further.” That was in 1939. This is after driving out the Ottomans, the Balkan Wars for independence in 1912-1913, and continual meddling by Austria and Russia. And 1939 ushered in the Nazis, more civil war, then paper boundaries creating a new Yugoslavia held together by Marshal Tito. Tito’s death in 1980 was followed by the breakup of Yugoslavia as Slovenia, Croatia, and then Bosnia sought their independence. All leading to what seemed inevitable: the 1991-1995 Balkan Wars with its explosive efforts byCroats and Serbs to ethnically homogenize their territories.

Lesson three: I will be in Belgrade, Serbia (Yugoslavia’s old capital) during Marshal Josip Broz Tito’s birthday celebrations. Although born on 14 January, his birthday is officially celebrated on 25 of May. “Tito? Who’s he?” this from a second-year university history student starting a Balkan History course in 1989. Tito bravely resisted Stalin. Kennedy, though anti-Communist and Roman Catholic, got along with Tito. And Eleanor Roosevelt invited him to Val-Kill and looked upon him as a “benevolent dictator.” For 35 years, Marshal Tito controlled a geographical area of the Balkans, named Yugoslavia, where both Western and Russian powers sought a sphere of influence with little concern about the actual people who lived within these borders. It will be interesting to experience this celebration on Tito’s “home turf.” Should I take a rose or a thorn to his tomb?

Lesson four: The Balkans has been trounced for centuries and misunderstandings by the ‘trouncee” have led to the ethnic cleansing of the 1990s. There seemed to be more tolerance under the Ottomans. The various Slavic languages were tolerated though Greek and Turkish ran the empire. Orthodox, Christians, Muslims and Jews coexisted but defined their communities by religion more than language or race.

By early 1800 Western Europe’s “enlightenment” into the Balkans came from orthodox intellectuals trained in Central Europe who spoke of a history of nations and ethnicities. The emphasis was on forgotten nations on Europe’s eastern periphery and on attempts to unite it with a common historical destiny of the continent. Doubts were sown that the Greek language or Greece was their fatherland. The Balkans began to define themselves as cultural communities for the first time. Christians owed loyalty to the Muslim state but were removed from Constantinople and the Patriarch’s actions were viewed in religious not national terms.

It was the modernity of late 19th century that sharpened religious boundaries between communities. The eventual division of the Ottoman Empire saw peasant uprisings creating new nation states firmly attached to their religion as a marker for national identity. In 1877 Russia’s invasion into the Balkans and advance on Constantinople drew in the involvement of world powers. These Great Powers negotiated the borders of the nation states even though once created they could not control them. So marked the end of the Ottoman Empire as known for centuries.

(Another lasting impact was the division of the emblems of the International Red Cross and the Red Crescent Movement. Both Russia and the Ottoman Empire had signed the First Geneva Convention (1864), which made the Red Cross, a color reversal of the flag of neutral Switzerland, the sole emblem of protection for military medical personnel and facilities. However, during this war the cross reminded the Ottomans of the Crusades; so they elected to replace the cross with the Red Crescent. This ultimately became the symbol of the Movement’s national societies in most Muslim countries, and was ratified as an emblem of protection by later Geneva Conventions.)

The history of the Balkans does not rest with the formation of nation states. Actually, Yugoslavia in the 20th century has existed three times but under differing forms of government. In 1929 the Kingdom of Serbs Croats, and Slovenes became the Kingdom of Yugoslavia. Invasion by the Axis in 1941 abolished that while the Resistance movement renamed it Democratic Federal Yugoslavia. Enter the partisan General Josip Broz Tito and in 1946 the Federal People’s Republic of Yugoslavia under a Communist government. In 1963 it was renamed Socialist Federal Republic of Yugoslavia and its people saw increasingly the centralized rule rest in Belgrade with the Serbs. They also witnessed a failure of its state to protect its citizens from the one-state ideology of the Communists. Tito kept a lid on Yugoslavia as long as he was alive. But when The Wall fell, so were the borders within Yugoslavia falling. Starting in 1991, all Hell broke loose and the SFRY began to disintegrate. What followed is hard to understanding but not surprising.

What began as a desire for independence by some nation states of Yugoslavia (Slovenia, Croatia, Bosnia) soon became a war. From 1991-1995 the Balkans was ravaged by the repression of minorities’ rights, the desire to exchange entire populations, and a plan to create and run a pure Serb state. Croats were little better; they just had less military power and preparation. The power rested in Belgrade in the heart of Serbia and in the black heart of President Slobodan Milošević. He found he could not legislate Serbian control so he turned to force. That failing, he and his generals chose murder to eradicate the identity and ethnic loyalty of generations – Crimes Against Humanity for which he and others from both Serbia and Croatia were placed on trial at The Hague.

I eagerly anticipate returning to Dubrovnik in May. In 1972 I sailed along the Albanian and Dalmatian coast when it was still Communist, staying well distant from its shores. Then the Balkans was painted in a forbidden cloak of mystery like a Jurassic Park existed just beyond the coastline. In 1982, I visited Dubrovnik when it was still Yugoslavia and before the Siege that bombed this historic UNESCO city into rubble. Then, Marshal Tito’s portrait hung in every store. I look forward to witnessing the courage and fortitude that rebuilt Dubrovnik and to meeting the Slavs of the Balkans. 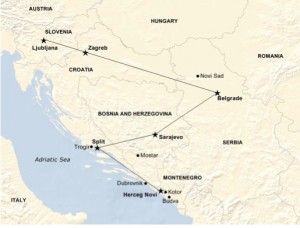 Tour of the Balkans – the independent countries of Montenegro, Croatia, Bosnia and Herzegovina, Serbia, and Slovenia.