Sunny and warm for my one hour bus ride north to scenic Lake Bled, known for its emerald green mountain lake with Bled Castle perched high above, all amidst the Julian Alps.

Bled was first mentioned in 1004, when it was awarded by Emperor Henry II to Bishop Albuin I of Brixen. (If you couldn’t be an Emperor it paid to be a Bishop.) Bled Castle followed by 1011. In 1274, Bled fell under the Habsburgs, lasting until 1919, except for a stint between 1809 and 1816 as one of the Napoleonic Illyrian Provinces. After the dissolution of Austria-Hungary in 1918, Bled came under the rule of the Kingdom of Yugoslavia and became a summer domicile of the ruling House of Karađorđević, a tradition that President Josip Broz Tito continued when he built his residence here in 1947. Tito knew a good view when he saw one. 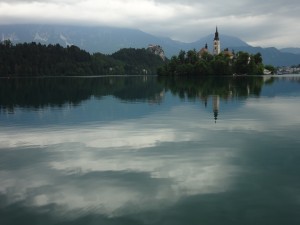 Lake Bled is a little over a mile at its widest and at most 100′ deep, formed after the recession of the Bohinj Glacier at the end of the Ice Age. With no natural tributaries, it is fed by a few springs. Perched on a high rock overlooking the lake is Bled Castle, which sounds like the summer home of Dracula but is not. The town is also known in Slovenia for its vanilla-and-cream pastry called kremšnita, just what my levies need.

Lake Bled is relatively quiet. I arrive to a warm welcome at my Pension TTT before beginning my walk of the lake. The scenery is beautiful. The steep climb to the castle (trail and 224 steps!) is worth the views of the lake and surrounding alpine mountains. There is also a very good museum, wine cellar, and ironsmith in the castle.

I read the walk around the lake took an hour but that had to be a misprint. I take my time, stopping to enjoy the views from Tito’s villa. Walked about his rooms, sat on his patio, peeked in his lounges, all quite proper. 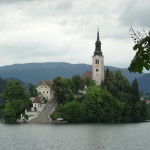 A small island in the middle of the lake is home to the Assumption of Mary Pilgrimage Church. I boated across in the traditional wooden row barge called Pletna just as it began to rain. The rower really earned his € for the trip. Nice little church, for a few Euro I could ring its bell for good luck. Before the church was built, there was a temple consecrated to Živa, the Slavic goddess of love and fertility. A local wedding tradition is for the husband to carry his bride up the island’s 99 steps, during which the bride must remain silent. All that is heard is the husband’s gasps for breath. There was a bride present as I arrived but I don’t think the groom carried her up the steps as he looked too fresh. Personally, it has to be a bad tradition as who wants a dead groom on their wedding night?

I ate dinner and drank a couple pivos in the square, feeding really friendly sparrows, watching the rain. I am recommended to visit the gorges tomorrow. My relaxing stop in Bled is getting very adventurous.

The railroad traversed Bled (actually nearby Lesce) by 1870 and created passage from Paris, London, and Vienna to Ljubljana, explaining the more Europeanized feel of Slovenia.  Other Slav brothers to the south were not as fortunate as Slovenia and the Slovenes resented carrying the tax load for others and thus pushed for independence. Sounds like a familiar story.

Bikers from Holland at my hotel this morning. They biked over the mountains in snow, which can still be seen on distant peaks. Today it is as sunny and blue as yesterday was grey. The lake wears a deeper green, the castle high and mighty. This is a mecca for those who want to participate in nature 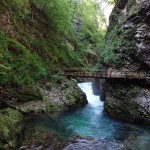 Such is the beauty of Bled that it would be easy to stay in town around the lake, but my host has recommended Vintgar Gorge. The gorge is located about 4km from Bled – it is possible to walk but my shins tell me to catch the bus.

The Radovna River has carved a deep gorge into the limestone mountains. Roaring falls create a series of cascades interspersed by deep pools. The water is blue/green and crystal clear, and where the water is calmer, I can spot trout lurking. The area is thickly wooded with deciduous trees. The trail is about a mile along a sandy path interrupted with railed and narrow wooden boardwalks hugging the rocky cliffs. This is a fantastic nature walk.

I recommend taking the tourist bus for 7€, leaving at 10 am from the bus station for Vintgar Gorge. You will have two hours to walk the gorge, ample time. There is much to explore and it would be worth spending more time here to do so. It is doable downhill walk back to Bled and you can return via the backside of Bled Castle. From there walk the trail down to the lake. The castle is a bit pricy at 8€ but the views are worth it. This way you explore the castle but avoid the climb and 224 steps. 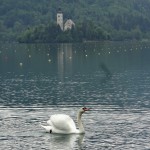 A brief visit to the small Church of St. Martins, interesting for its beautiful flowers and multicolored aloes, and I return to my lakeside bench. I can find no better way to spend my time than around the lake. Mallards and hissy swans, clear water and 15″ trout, are all a normal sighting along its shores. I enjoy lunch on a bench, sharing it with ducks and swans and watching crews practice rowing skills.

Two suggestions and one question: Stop the building around the lake, you don’t need boat houses. Boats float in water and rain doesn’t hurt them. Secondly, Stop the smoking. Give it up! Finally, why all the “Js”? There is a plethora of Js in the Slavic languages. This letter must wear out on typewriters. All for a letter that is silent. 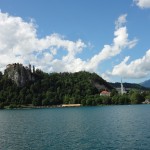 So I end my perfect day at Caffe Cajnica, again name known because their WiFi is free, drinking Lasso a good SLO beer, enjoying magnificent views of the lake, castle, and distant Alps. Could life be better?

Tomorrow I leave SLO to return to Croatia and the West – Fiume to the Italians, Rijeka to the Croatians. Waterloo to D’Annunzio, the flamboyant Italian poet who led a coup in 1919, declared war against Italy and tried to established the Italian Regency of Carnaro. Bombardment by Italian royal forces led to his surrender of the city. Now Rijeka is in Croatia and a 10th Croatian border stamp for my Passport.