1 June – Ljubljana, Capital of Slovenia Ljubljana is said to be founded by the Greek hero Jason, who stole the Golden Fleece and along with his Argonauts sailed the Argos across the Black Sea and up the Danube and Sava. In transit they stopped at the Ljubljana Marshes where Jason slew the Dragon. Thus, the Ljubljana Dragon depicted on the coat of arms. Like Jason, I am happy to be here. 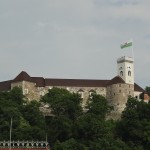 Ljubljana is Slovenia’s only large town with 272k inhabitants. Throughout history, it has been influenced by its geographic position at the crossroads of the Slav and European cultures. This is one reason why their claim for independence from Yugoslavia went relatively unchallenged in 1991. Slovenia was the only Balkan country that did not experience the ethnic cleansing and civil violence that befell all the others; after a short 10-day war, Slovenia was rid of Milošević. 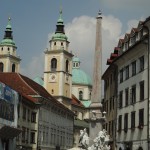 A 6.1 earthquake in 1895 destroyed over 10% of the city so much of what I see reflects 20th century architecture, much of the town planning thanks to architect Jože Plečnik. His city plan was to interconnect its squares and parks interspersed with monuments and fountains so as to best enjoy Ljubljana’s beauty. Plečnik succeeded. He is best known for his design of the iconic Triple Bridge. The architectural style is Art Nouveau, practiced in Vienna in 1897, and known here as Secession style. Thanks to Plečnik, Ljubljana is beautiful and easy to walk and gawk.

In 1941, Fascist Italy occupied Ljubljana and made the city the capital of an Italian “Provincia di Lubiana” with a former Yugoslav general as mayor. After the Italian capitulation, the city remained the capital until 1945. Ljubljana was surrounded by over 19 miles of barbed wire to prevent co-operation with the resistance movement. From what I hear from our guide, they still carry a grudge against the Italians.

Our guide, like all the others, walks us around town and points out the buildings and museums of interest, gives us a running commentary on the history of Ljubljana, and describes the church of the day in vivid color. However, being “an atheist” he is not as long-winded about the church; being a semi-communist he is politically opinionated; and being an ex-student and young more willing to digress and rant concerning his Slav brothers and recent history. Made for an interesting walk. However, I question if the typical Slovene would agree. He describes Slovenes as introverted aggressors and very conservative while the Serbs are extroverted aggressors. Maybe so. 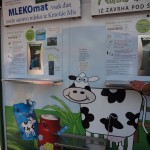 Of interest in the green market, beyond the Albanian venders kept to the outside “with inferior products, buy local,” are the Milk machines. You can bring your bottle and instead of a soda, fill it with fresh unpasteurized milk.

After dinner at a local restaurant, Carol and I took the funicular to the 12th century Ljubljana Castle, a rebuilt medieval affair atop Castle Hill that dominates the city. The area surrounding the castle has been continuously inhabited since 1200 BC. The castle’s tower has a great view of the entire region and a short video of it history. 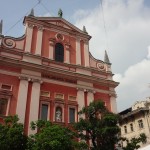 Church of the Annunciation

A morning of free time! Bought my future bus and rail tickets, then walked to Tivoli Park where thousands were involved in a fitness rally. Too much jumping and exercise for me. My destination was the Scientific Institute of the Executive Committee of the Liberation Front, later known as Museum of the People’s Revolution, now the Museum of Contemporary History, which presents Slovenia’s part in the two world wars and the war of independence. Seems to be an effort to address their history. Very well done with video interviews of soldiers and concentration camp survivors.

Unfortunately our lecturer is a brother to our city guide so some of the rhetoric is identical, allowing no second perspective. Also, it is 2 1/2 hours of precious afternoon time in a city good for strolling, filled with things to do, and no rain. A real weakness of this tour.

Lecture points: Italians took territories after WW I, and Slovenes still don’t like the Italians. Unemployment rate 11.5 %; parts of Balkans from 20-40%. Good to be in EU. Very safe country. The murders and violence of the Communist rise to power and elimination of opposition are unresolved. Communism did not allow expression of individual state’s Nationalism, their ideology being there was no problem. Fell apart with the end of the Cold War. Serb wanted to practice domination. Lecturer felt Tito “a bastard” and surprised we see any good in him. Miloševic was after power, not a Nationalist, denies he was about religion. Church less important in daily life.  Lecturer was baptized to please one grandfather and his brother not baptized to please the Communist grandfather. Serbs couldn’t force Slovenes of Yugoslav army to fight Slav brothers. Smaller Serb minority here. Optimistic for peace as balance of power no longer in favor of Serbs. Tourism is less than 10%. Economy is the major problem here and elsewhere. Feelings about NATO bombings depends on country – Bosnia glad, Slovenia okay, Serbia not so much. He was open and honest with comments, but again I wonder if he is typical Slovene.

In Slovenia as in all of the Balkans, Tito’s ideology of “brotherhood and unity” was poisoned by generations of war, mistrust, fear and religious hatreds, and it will take a generation or more to repair the hostile residue. Permanent peace was doomed by a refusal by Tito’s government to admit to these issues when Tito was alive and possibly, through his popularity and personality, achieve Brotherhood and Unity. There is much dirt swept under the proverbial carpet, and the Balkan civil wars following Tito’s death are a result of fanatical sweeping. If another war “of 50-year tradition whether they need it or not” can be avoided, perhaps the Balkans can grow in peace. Group consensus is this will not happen.

Dinner in local restaurant, separate tables, no sharing or closure, loud polka band, and the end of trip. Enough said. At least we had champagne and not offered that grappa or pálinka stuff. 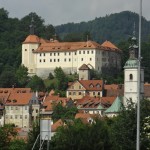 Roomy up at 3:30 and off to airport. Double ugh! I got up 7:30, packed, got into my new room further down the hall, had breakfast and boarded my bus for the 30-minute ride north.

Škofja Loka, a thousand-year-old city at the confluence of two major rivers, is considered the most beautifully preserved medieval city in Slovenia. Loka dominion was owned for 830 years by the Bishops of Freising. It lies at the foot of the Alps amid beautiful farmland, dairies and horses. Loka Castle, built before 1202, reigns above the city.

The old city is quiet as I stroll past colorful facades with the most noise coming from bicycles whizzing by and the countless church bells. I follow narrow streets destined for the castle; Free Sunday allows me to browse the wonderful museum in the castle halls. Local farming, village life, crafts, furniture, guilds, those ubiquitous pottery shards and splintered artifacts, plus a good war museum (WW I and II and the partisan war for independence) are well represented. 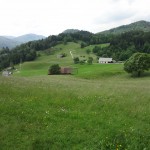 I decided to walk the nature trail into the forest, past Pri Grebenarji’s farm, always towards Obvoz, whatever that is. (Actually means “detour” so I am amazed I found my way.) A wonderful walk shared with two serious runners, birds and nature – the only sounds the wind in the forest, birds, crickets, and the church bells. They call this area the Gallery in Nature. There are churches on every alpine peak within sight. I think returning to Ljubljana is less important with each step. There are hotels here and I wish I had booked one. Village is filled with bikers and if I thought I wouldn’t break an arm, I would join them.

So I sit at the Na Strengah, I know that because I am connected to their Wi-Fi, sip a Pivo Union from SLO, and enjoy the good life. (That’s Slovenia not San Luis Obispo.) 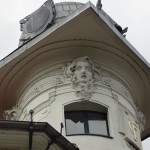 Some of best views are up

Returning to Ljubljana, I visit the National Museum and Natural History Museum. Both in the old Victorian British museum genre. Lots of stuffed birds and animals, bugs and bones. Walked around the city enjoying the building facades. I love the Art Nouveau/Sucessionist architecture. The US Embassy is located in a beautiful 1897 historic building. Why is it only the American Embassies restrict photos? Guard came out and asked if I wanted a postcard of the building, very nice gesture.

Ate a delicious sandwich with cold pivo, exhausted but happy. Tomorrow I trek back to nature, north to Bled. 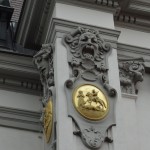 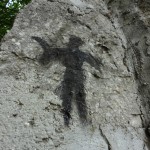 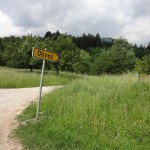