In Search of Taiwan History

I hear and I forget. I see and I remember. I do and I understand.

TAIPEI, 9 am, 29 Sept: I have had a very busy three days in Taipei. Our American education system teaches very little about this part of the world. Practically nothing about Taiwan. Thus, everything is new and I struggle to put this island and it’s people into historical perspective. I have read about China, the Mao/Chiang rivalry, the second Sino-Japanese war and Chiang’s ultimate loss of Mainland China to the Communists. Known as the Republic of China or ROC, Taiwan is not recognized as an independent country by most of the world, having lost its UN seat to People’s Republic of China in 1971. About every president since Eisenhower has visited, but recognition is informal. The PRC is acknowledged as the sole legitimate representative of all China, though ROC would wish the opposite.

First stop was the 228 Memorial Museum and Peace Park. By the end of WW2, the brutal 50 years of Imperial Japanese rule of the Republic of Formosa ended. China stepped back into Taiwanese life in the form of Chiang’s Kuomintang. Not as productive as the Japanese, the Chinese leaders quickly fell into disfavor. 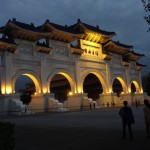 The Peace Park and museum is dedicated to the memory of a massacre that began on 28 February 1947 when protesters reacted against the Kuomintang government over a brutal police action that killed a Taiwanese civilian selling illegal cigarettes. (Ironically, I see very few people who smoke in Taipei!) Chiang initiated a severe crackdown by the Nationalist government and restored KMT control and ushered in Taiwan’s period of White Terror. Two years later the KMT lost the Chinese Civil War and Chiang retreated to Taiwan to set himself up as China’s national government in exile. He remained its authoritarian iron-fisted leader until his death in 1975.

Why do Taiwanese honor Chiang with such grandiosity? This is a question I ponder as I maneuver its wide boulevards towards Chiang Kai-shek Memorial Hall. Feelings vary on Chiang. There are those who realistically view his past “White Terror” and wish to remove his statue. Recently as 2010, Chiang’s park was renamed Liberty Plaza. But there is no missing his ostentatious white monument and his 33-ft bronze statue facing China at the top of a flight of 89 stairs. The Changing of the Guard is equally impressive, as these ceremonies tend to be, with its rifle spinning, boot clapping, hand saluting, and slow-slow high stepping.

Beneath the Memorial Hall is a huge museum and arts center. Chiang dominates  with little mention of the PRC nor Mainland China. Nor any mention that Madam Chiang, once a powerful lady in her own right, left Taiwan after his death and lived in New York until her death in 2003 at age of 106. My money is on those realists who would see him relegated to the ash-heap of history, unless of course they see him as a lucrative tourist draw.

The gardens and grounds, best entered through its huge white Gateway arch, also include the beautiful Chinese architecture of the National Theatre and National Concert Hall. Part of the plaza ceremony is the nightly lowering of the state flag. Again, highly regimented soldiering, it is worth the pause to see the event. The flag is not folded, but wrapped around a rod for the night.

The Botanical Gardens include the National Museum of History with artifacts dating back over 15 centuries. A timeline bar graph is humbling as cultures are compared and the US occupies this tiny section at its end. Serious bird photographers, replete with camouflage and the biggest lenses I have ever seen, occupy the gardens. 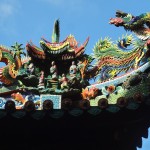 The city has many gorgeous Buddhist temples including Lung-Shan built in 1738 and the more recently rebuilt Tien-Ho. Both are exceptionally ornate and filled with hypnotic chanting and many faithful lighting candles, spreading incense, and pitching Jiaobei blocks. These are pairs of wooden divination tools originating from China, carved into a crescent shape and thrown to answer a yes or no question.

The National Palace Museum is home to what may be the world’s largest and finest collection of Chinese art, much of it liberated from mainland China during the retreat of Chiang’s KMT. Some feel the best of the Forbidden City lies within its maze of rooms. Certainly the Chinese think so as the crowds seeking antiquities like a jade cabbage from the Qing dynasty are the worst I have seen anywhere. Among its liberated treasures are paintings, calligraphy, enormous bronze Buddhas, snuff bottles, statues, ceramics, bronzes and jades. Some pieces date back eight thousand years into Chinese history.

Martyrs’ Shrine seems an appropriate stop as I learn about Taiwan history. Here, just beyond the impressive Grand Hotel, is a shrine honoring the 330,000 men who sacrificed their lives to the revolution before the establishment of the Republic of China and who fell during the Sino-Japanese war and the Chinese Civil war. Another precision changing of the guard, this time with shinny silver helmets, perhaps to reflect the heat. 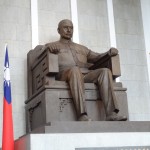 No historical walk would be complete without a visit to Sun Yat-sen Memorial Hall devoted to the founder of the National Republic of China. A huge statue of Dr. Sun, recognized as the founder of modern China, is guarded by two sentries and another show of guards’ intricate choreography, spinning bayoneted rifles and slow-slow precision stepping. I wonder what China, and Taiwan, would be like today if Dr. Sun had not died at age 59 in 1925. Instead his young protégé Chiang Kai-shek won the power struggle for the KMT.

There are remnants of architecture built under Japanese rule like the Presidential Palace, but most of Taipei’s beauty, outshining the glitter and commercialism of modern China, is the outstanding traditional Chinese architecture of the shrines, temples and gardens. This is not the poor cousin of the mainland. It is more a mothership off the coast pointing the way to democracy with deep and respected roots of Chinese culture. Japanese colonial rule nor years of political struggle for identity have dampened Taiwanese pride. Taiwan does struggle with its own identity, especially with the recognition of its own indigenous tribes (of which I see little mention). But I don’t doubt its people and government are ready to begin an analysis of their history. Where that leads them and what their future holds as far as world recognition remains to be seen.