Holy Crap – I Am At The Summit

We must accept life for what it actually is – a challenge to our quality without which we would never know of what stuff we are made, or grow to our full stature. 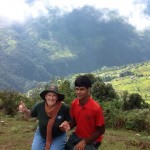 Yam ensured I made it up the terrain behind us

HIMALAYA LODGE, GHANDRUK, 6600ft, 10 Oct: I awoke to a clear view of Fishtail and sunrise over the Annapurnas. Garden fragrances add to the overall beauty and tranquility of Sanctuary Lodge.

After breakfast we trekked along the Modi River Valley through local farms then began to climb out of the valley and up, up, up. Our trail passed through small villages, terraced rice fields and forests with spectacular views of the surrounding valley, Fishtail and occasionally Annapurna South amid the clouds. 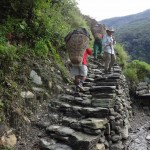 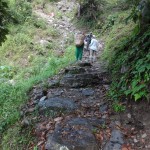 We face an elevation gain of about 3000ft that is mostly stone steps. It is difficult to describe these steps as they are not steps by western standards. Imagine the Nepalese villagers carrying rocks and shale of all sizes and building up stepping stones to provide a way up and down the mountain. Nothing is even, uniform in height nor size, and the next step can be 6″ or 16-18 inches. Streams and rivulets make rocks wet and slippery and where the moss is able to grow the steps are dangerous. I focus on the trail and my next footing. Just to add to my excitement and challenge, some rocks are wobbly.

Donkey caravans loaded with supplies for village and lodges

We share our path with countless donkey caravans. They bring goods up and down the mountains. Sure-footed, some wearing bells to announce ther presence, some with decorative saddles and face cloths, driven by small boys or men, the donkeys have the right of way. Their leavings are fragrant and prolific but their passing gives reason to pause. In fact, it is wise to pause against the mountain so as not to be pushed off the valley side.

After a short section of relatively flat terraces and road, I climb up a series of rock steps for over 4 hours. I don’t think I have ever been so exhausted. Any reason to pause is a blessing. Without my porter, Yam, I would not make it. He carries my extra water and bag and offers a hand to help me up the large steps, over wet stones, over rickety and swaying bridges high above the rushing river gorges, and generally keeps me going when I would rather stop. I don’t know whether to curse him or love him as he drags me up the mountain. 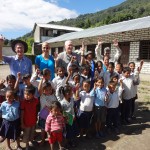 Children at their school

Close to the top of the rock steps (keeping in mind there are always more rock steps), we stopped at a local school. Here we met some of the children ranging from 3 to 11 years old. I was able to distribute the pencils and erasers I brought, some donated by Staples. The children also received books and pencils from our guide. The children are on festival and came up and down the hills to meet us, sing a song, and make us welcome.

The last two hours were mixed flat and narrow trails between rice fields, through villages and more rock steps but fewer rock climbs. The village houses are of stone and reflect the hard work necessary to carve the stone, carry it to site then build the house. Because of the festival, many are painting their houses with a mixture of mud and cow dung, making an attractive ochre plaster to cover their walls. Nothing of the sacred cow is wasted here and it is not uncommon to see a woman carrying piles of cow dung back to the house with her bare hands.

I am exhausted after 7 hours on the trail. But of course, it is only the best for us as our Himalaya Lodge is at the top of endless flights of stairs with spectacular views of the Annapurnas. It is welcome juice for us and we relax in the gardens of this beautiful lodge. Once again the clouds obscure the peaks but there is always tomorrow.

I enjoy a well-earned foot massage and have my pants and socks laundered, probably the usual way at the water spicket and using rocks, then hung in front of my room on clothesline. Happy hour is around a fire and we watch an interesting documentary “Sherpas – the True Heroes of Mount Everest.” We had delicious soup and momos for dinner. Then I crashed before 9.

Awake before dawn with mild temperatures as I step outside and witness the Annapurnas against a brightening sky, placing two little prayer rocks on a Buddhist  shrine. The massive peaks of Annapurna South (23,684′) and its neighbor Hiunchuili (21,131′) and Fishtail (22,943′) tower over the valley.  With our morning coffee in the garden, we enjoy a spectacular show as sunrise slowly spreads over the peaks.

For our morning trek, we climb up mud cow paths filled with sacred cow dung to the hills above our lodge for magnificent views that include Annapurna Two and Annapurna Four. We climb even higher to Small Deurali Pass for a view of our past route and I am amazed how far I have trekked, about 34 miles so far. Through pasture, brush and jungle, along cow paths and more steps brings us to a Buddhist Temple high in the hills. We return for lunch in the garden while Buddha’s flashlight throws a spot of light traversing the peaks snowfields of Annapurna before disappearing as fast as it appeared. 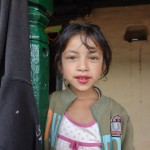 Our afternoon walk is down to the village of Ghandruk or Konda Village which means Stone Village. The village is indeed all stone and once was a major recruitment centre for Gurkha soldiers. The women of Ghandruk maintain a local industry of weaving traditional Nepalese rugs. We visit an “untouchables” house, spy into the yards of the busy villagers, buy a woven rug, and visit a Buddhist Temple where I was able to purchase prayer flags. There is much drying of grain and beans underway, plus many micro enterprises of weaving and jewelry. I almost made the stairs back to the top without stopping but the altitude just begins to zap my strength after the 120th step and knowing there are five or six hundred more to go humbles me. How do these women do it? And they are carrying baskets of fodder for the cow and wearing flip flops. As for me, I am afraid the cow would starve.

Tea time in the garden and we watch the beautiful, ever-changing eco-system of the Annapurnas. But, no rest for the trekker as our guest speaker is a local Gurung man who comes to talk of his life as a Gurkha soldier. He served in Malaysia and Brunei and was wounded twice. He joined the Gurkha army at 18 for the sum of 10 rupees and served for 13 years. His British government pension is about $300 a month. Gurkhas are highly respected and boys want to be a Gurkha. Not the case for military who killed many people during the 10-year war. (As a result the paramilitary armed police was formed to fill the gap in Nepal’s security forces.)

We finished just in time for the end of sunset on Fishtail and Annapurnas which was magnificent with spots of red flame on the ice fields. 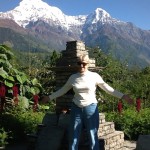 Another happy hour and a gin & tonic in honor of its namesake trail. I couldn’t be happier with the experience and company. Tomorrow we trek down the mountain in less than half the time it took to get here. Steep steps and a challenge for the calves.