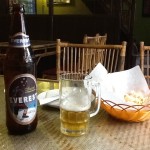 NEPAL, 16 Oct 2013: My title may be a Nepalese advertisement for beer, but the sentiment is true. It has been an interesting, challenging and fun experience traveling Nepal with Niraj Maharjan and my travel mates of Road Scholar. Niraj has brought vibrancy and passion, humor and pride to his task of leading our little group, and his efforts brought alive what was before my eyes. I have gained much understanding and appreciation for the culture, people and hopes of Nepal. 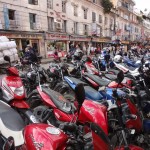 But for a few miles here and there, there are no practical roads in Nepal. Possibly five stop lights exist, center lines do appear occasionally, and at least three lanes of traffic plus pedestrians and cows crowd the two-lane roads. There cannot be a shock absorber or spring on any vehicle more than six months old. Yet, the Nepalese drivers have a sophisticated set of light and horn signals that do not leave one in doubt about a driver’s intentions. We saw few accidents and one dead cow. (Tho I was told there was a bad tourist bus accident on Chitwan road today and four guests are in hospital.) Riding near the rear wheels is where the ride was roughest. No point in traveling if you’re not feeling it.

Where the #*^! are sidewalks? To avoid grievous injury, walk in very close proximity to the locals when in the streets. Cars and scooters may honk but came within inches of my limbs, resembling a highly choreographed ‘dance of death.’

Crowded – masses of humanity – the thundering hoards – do not begin to describe trying to walk the streets of Thamel and Kathmandu.

We were told hiking and trekking were different adventures. I say it is relative. I trekked the Annapurnas. I prepared by working out, doing steps, hiking in the mountains in 6000ft mountains; thought I was in fairly good shape. The low 80s heat, humidity even higher, thousands of steps at altitude challenged my every ounce of strength and fortitude. Plus, I slipped on non-existent sidewalks my first day in Kathmandu and hurt my foot. For all that work and those steps, I claim I trekked the Himalayas. I swear my calves are firmer. I dare the Hillary wannabes to argue my achievement.

Everest has the fame, but the Annapurna has the glory. This massive range claims several peaks over 22k feet. The entire Himalayas are most impressive throughout Nepal. Because the country is only 124 miles wide, every morning vista can contain snow-clad peaks and each evening sunset can be spectacular. Clouds notwithstanding.

Nepalese villagers are hard-working, generous, kind and friendly. They never hesitated to welcome a bunch of camera-toting, gawking foreigners into their humble homes. The children always greeted us, as did most people, with a respectful, happy  “Namaste.”

The food is good and varied. I could eat Indian, Chinese, Italian and saw German bakeries. The simple Nepalese food was the best: lightly spiced, steamed veggies, good dumplings. Vegetables were always fresh, as was the fruit. Soups were excellent. Surprisingly, in spite of a lack of dependable electricity, the food was always served very hot. And more importantly, the beer was always cold. Love the momos, their traditional dumplings. And for all lunches and on the trail I got chocolate for energy. We became addicted to Kit Kats. I was able to sample most of their beer and rate Everest best, then Gorkha and Nepal Ice. Unfortunately, the most advertised beer is Tuborg (The Fun Starts Here). Go figure.

I trekked Nepal and went home leech-less. I gladly missed the experience. Jo led with six blood-suckers asucking and best miles atrekking. Leeches are prolific, fast and disgusting. I believe Deet on my boots helped. Also, salt is a defense. Citronella may also help.

I was in typhoon/cyclone country and the busiest October for storms in almost two decades. I arrived in Tokyo in wake of Pabuk, I left Nepal in aftermath of Cyclone Phailin. Typhoon Narita is hangout out in the South China Sea. Wipha is bearing down on Japan as I await departure from Tokyo. Nepal is landlocked but feels the effects of the rain. It is time to dry the rice and not a good time for rain. Monsoon season should be over. Overall the weather was good and afforded views of the mountains. I would have liked to sweat less but it made for an enjoyable shower at the end of each hike.

Ker & Downey lodges were superb. All were small, 8-12 rooms, had fantastic service, good food, and comfortable rooms with character. I felt like royalty. Bathrooms are usually solid slate. Nepal has enough rock to meet all needs – it just needs the back-breaking work of the women to carry it to the site. If China uses 25% of the world’s concrete, Nepal uses 50% of the rock. 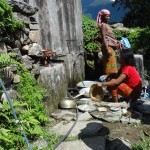 The women are unbelievable! They climb these mountains to forage for grasses for the buffalo, cook in smoke-choked rooms, birth babies with little more than midwife help, and gather firewood. Loads are transported on their backs using the same steps I struggled up with a porter who carried my bags. And they are in flip flops or bare-footed. It is a hard life I could not survive a day. While here, many buffalo and goats were sacrificed for the Dashain festival and my thought was at least these women no longer had to carry fodder up the mountains to feed them.

Dashain festival lasts for 10 days and buffaloes and goats are sacrificed. On the initial festival day, the Brahmans sow barley at the place where they worship and ritualistically sprinkle it with sacred water on a daily basis. On the tenth day they pull it up and present it in bunches to their followers. Mohani corresponds to Dashain and is one of the year’s grandest celebrations for the Newari. The event involves family gatherings, elders blessing the children, kite flying, and outdoor functions. I was fortunate to witness its colorful traditions

Traveled with my iPad. Most lodges did not have wifi and the fancy hotels charged for it. Not worth the cost as it was very slow. My 120MB international data plan was ample for my uses. There was a cell signal everywhere but at Chitwan but they had free wifi. Apple Maps is poor, Google a bit better but don’t depend on either to plot a route. However, without Google’s blue bubble, I would still be looking for my way back to my hotel in Thamel.

Tho everyone says the caste system is passé with the younger generation, it is still a part of life here. There are untouchables, usually so called because of their profession like blacksmith or butcher. So if it is not as important anymore, why title yourself Brahman or indicate someone’s caste? A Nepalese I will always remember is an ‘untouchable’ girl in Ghandruk. I just wanted to hug her for her sweet, beautiful smile. 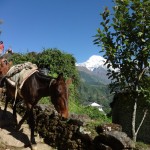 I hesitate to say this country lives in poverty. I have seen worse in India and Africa. No doubt people could use aide  from the western world. Most people live at a subsistence level of farming. Salaries in cities average $70 to $100 a month. But I saw few homeless or people living in the streets. Villagers were supportive of their neighbors. Bartering is a way of life. There is a positive karma that flows from the mountains and through the hearts of the people. They deserve a better government.

Pride in the village and home are obvious. To sweep dirt walks of every leaf and twig seems to be an oxymoronic task. Homes were neat, clothes were clean, hair washed and shiny, and most trash picked up. All this with little infrastructure support from the government. I saw rubber tubing stretching down mountainsides for the village water supply, villages developing hydro-electric generators for reliable power, developing micro enterprises, health centers and basic schools. But water is cold, cooking and heating comes from the wood women cut and carry, wood smoke is dense in kitchens, books scarce, electricity in constant brown-out 15-watt mode.

Nepal’s snow-clad mountains are the source of waterfalls, springs and rivers nourishing the country. In the mountains, clear and inviting pools and rivers abound. And I wouldn’t consciously dip a foot in any of them, including some of the swimming pools which were filled directly by this mountain water. Think extreme pollution. For example, our opportunity to help wash the elephants in the river – the river the elephant just peed and shit in, the buffalo and people doing the same, trash afloat, and the ghats just upstream.

Please stop spitting in the streets. I think it comes from the smoke-filled rooms but maybe not. There must be lots of respiratory problems from all the wood burning. Regardless, yuck!

Suggestions? Bring a camel bag for water so to free your hands. For practice, climb stadium bleachers – lots of them. In fact, find at least a 30-story building and climb the stairs to the top – non-stop – while carrying a small backpack. The higher the elevation the better, like Denver not Los Angeles. Do not use an elevator from this day forward.

Forget the shorts as the leeches, vegetation and jungle are not conducive to bare legs. Don’t need much of a coat as lodges provide. Pack salt. Don’t expect to loose weight. Don’t worry about bathrooms. I always saw western-style toilets where we traveled. Bring some toilet paper but you probably won’t need it. Tho you drink volumes of water on the trek, you will sweat so much there is rarely a need for a bathroom or a big rock. Nepalese definition of speed, difficulty of climb and descent, and cold are circumspect; it wasn’t that cold, it was steep.

I exchanged about $100 for local vendors, otherwise I used $US. Bargaining is the rule. I bought 650ml bottles of beer for 130-160 NR at local shops, less than a fourth the hotels charged. Local crafts are inexpensive from the start and I hated to bargain for less. 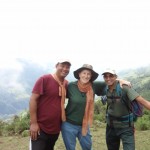 Road Scholar used the local travel provider of Venture Travel (Temple Tigers) Nepal in Kathmandu. The Ker & Downey lodges used for the trek were excellent. The Shangri-La Village Pokhara was very nice. Chitwan National Park and The Temple Tiger Green Resort were great experiences with a busy schedule of jungle activities. The Crowne Plaza in Soaltee was a tourist hotel, nothing special. I am sure there are many good guides, but you will consider yourself blessed if fortunate to get the services of Niraj Maharjan. You will have an experience guaranteed to be UNbelievable!