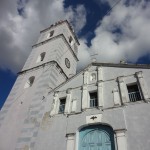 I experience a four-hour bus ride through the least developed area of the island: narrow road with no paved shoulders, some sugar cane fields, pig and chicken farms, goats, sheep, busy small towns, cattle, horses, trucks, bikes, people transports, and pedestrians. The slim road is a gauntlet of movement. Many gardens and family chickens and goats. But no industry, no advertising, no heavy traffic unless you consider three horse carts at the same corner. Everywhere men cutting grasses and maraboú with machetes. Huge fields once producing cane now taken over by the maraboú.  Everywhere is the invasive thorny maraboú – used for fencepost, cut for charcoal, used for cooking. Without tractors and heavy equipment, it is back-breaking labor to clear fields with oxen and machetes. Thus, much remains unplowed in a country where food must be imported.

Like Camagüey, Sancti Spiritus is another of the original 7 cities founded by the Spaniards. Population of about 100K, the city has a Medical University with students representing 34 countries from around the world. Sancti Spiritus is a small, walkable colonial city. We arrive at the Plaza Hotel situated in its historic heart overlooking Independence Square. The square and adjacent pedestrian street are busy, noisy and crowded late into the night. I would like more time to explore its streets, large market, and active nightlife on the mall.

Our first People to People Connection is with Liudmila Quincose who, like so many others after the Special Period, developed her own niche for a business. She is a scribe of love letters. She spoke of how she developed this idea into a nationally recognized program.

After a fair lunch at Casa De La Trova and music by another local band, we walked the cobbled streets to visit the oldest original church in Cuba then on to a second People to People experience.The Guayabera Project and Center has leased a former mansion/restaurant in order to produce the well-known Cuban shirt, the Guayabera. They have a small museum with shirts from famous Cubans, including Fidel and little brother Raul. They are optimistic about the program and ability to develop a business. Again, the sense that times are changing but confidence in their future.

Enjoyable evening overlooking the square and pedestrian mall watching the traffic and people, listening to the bands and enjoying the warm breezes.