Wow, now here is a city! Walkable historic center, lively, inexpensive, clean, good food and beer, cafés and street shopping. I immediately like the old-world atmosphere of Kraków. Its awesome main square is filled with the noises, conversations, horse carriages, music, and clinking glasses and cups of locals out to enjoy their city. I am happy to be here sharing it with them. 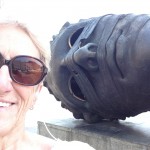 Mitoraj’s giant head – plus me

My first stop is the Rynek Underground which traces the history of Kraków’s market square from medieval times using the modern technology of holograms, touch screens, documentary films and displays amid the sounds of a busy market life. The square and its people come to life thru artifacts excavated from in front of the Cloth Hall. Opened in 2010, I can walk thru centuries of history dating from at least the 11th century. A top-notch experience of what the market was like and its place of importance in European trade routes.

Squeezed between protestant Germany and orthodox Russia, Poland is Europe’s most devout catholic nation and nowhere is it more evident than in Kraków, exacerbated by the city’s favorite son Pope John Paul II who was the Archbishop in Kraków before being called to Rome. His likeness is everywhere and in Kraków he is already considered “The Great.”

Poland is an interesting country. For generations, from 1795 to 1918, it was not even a country. After its formation, foreign armies continued to march across its lands with no regard for the territory or its peoples. In fact, Russia, Austria nor Prussia saw a reason for Poland to exist except as a buffer between powers. Relatively flat, Poland acted as an east/west corridor for advancing armies. Invaders came from all directions from the Tartars and Teutonic Knights to Napoleon, Hitler and Russia. Name a massacring army and they probably fought their way thru Poland, including about 1300 years ago the Poles themselves.

Once a flourishing territory from the Baltic to the Black Sea, Poland eventually fell under the dominance of the nobility, the wealthiest 10% who elected foreign kings. The parliamentary concept of “one vote defeats all” paralyzed the government and pretty much nothing got done to the detriment of the country. (Reminds me of US Congress right now.) This nobility expressed few loyalties to a ‘Poland’. Surrounded by Russia, Prussia and Austria, Poland was divided up like a ‘cake of kings’ as each country saw fit. A third of Poland spoke no Polish. The only one without a vote was Poland. Struggling for some form of national survival, Poland disappeared from European maps until after WWI. 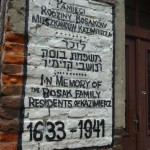 Generations of Jewish families who lived in Kraków before Holocaust.

But in 1939, WW2 began when Hitler attacked Gdańsk. With 6 million deaths, Poland suffered the worst human loss of any nation. And much of Poland’s story is a Jewish story beginning in the 14th century when King Kazamirez the Great welcomed the Jews to move to his lands. Before WW2 80% of Europe’s Jews lived in Poland; Warsaw was the second largest Jewish population in the world after New York with 385k out of 1.3 million citizens. The Holocaust and Soviet resettlement changed all that.

After the war, millions were displaced as the borders and peoples of Poland continued to suffer under communism. But the Poles are resilient. As Gloria Gaynor sang, “I will survive.” Even Stalin felt “introducing communism to the poles was like putting a saddle on a cow.” With the first Polish Pope, persistence of Lech Wałęsa and the solidarity workers union, and Polish defiance of martial law, 1989 saw the communists voted out and the soviets departure. Under communism the conservative Pole rebelled against an atheistic regime by going to church. They worked hard and they prayed hard. In spite of little support from the US, Poles remained loyal to America, the joke being they should be the 51st state of the union. I’d be proud to have them.

Today, a wave of building and renovation, addition of high speed trains, and a joining to the EU in 2004 may threaten Poland’s conservative lifestyle but it also brings a wave of tourists. Walking down the streets, many of which are pedestrian only, most languages heard are Slavic, German, and a smattering of English. It’s a good time to be here. 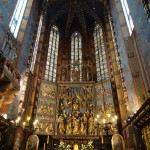 North of the Karpathian Mountains, Kraków is cooler and wonderful thunderstorms cool the afternoons even more. The best historical sights are easily reached from my pleasant little room at Hostel Brama on Florianska Street. From the Barbican and St. Florian’s Gate with its walkable defensive walls and towers, it is a short stroll to the icon of Poland, Wawel Royal Castle and Wawel Cathedral. In between is the Rynek Główny or main market square with the bustling markets of Cloth Hall, Church of Virgin Mary and its cherished 15th century Baroque alter piece by Veit Stoss (stolen by he Nazis and returned by the Monuments Men), the 12th century Church of St. Adalbert and the Town Hall tower – all surrounded by hundreds of strolling locals and guests, horse carriages, buskers and cafés. 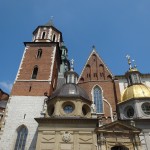 Walking down The Royal Way (the King’s route for special occasions) the street is also home to Karol Wojtyla who lived in Krakow for four decades before being called to Rome and the papacy. Karol Wojtyla was archbishop at the beautiful St Francis Church, his home just around the corner. Here he quietly defied the communist government and encouraged his fellow Poles. Hovering over the city is the national icons of Wawel Royal Castle and Wawel Cathedral, but it is Pope John Paul II who is the real essence of Krakòw. 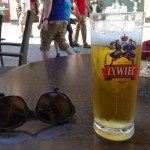 The Church of Saints Peter and Paul and Church of St Andrew in the Mary Magdaline Square, Kazamirez’ Corpus Christi Church, Galicia Jewish Museum in the “Old” Synagogue, Remu Synagogue and the Old and New Cemeteries round out my trek of Kraków. I return to the historic center via the green, pleasant Planty, the park that replaced the original walls and moat surrounding the city. A walk of the Barbican and what remains of the 13th century defensive walls and towers brings me to the well-earned Polish Żywiec beer.

No visit to Kraków would be complete without a trip to Oświęcim, about 42 miles west and site of the infamous Auschwitz. A morning walking the museum of Auschwitz II-Birkenau is mandatory for humanity. Sobering that any person could imagine such horror on a massive scale – with others who believe him not insane and willingly create that horror. The greed, immorality and cruelty is impossible to comprehend. Birkenau was to hold 200k people with the intent to wipe out the Polish people. It did kill 80% of Poland’s Jews. Auchwitz is sobering but Birkenau is horrifying. 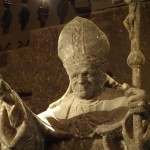 A 30-minute shutte takes me to the Wieliczka Salt Mine, active since the 13th century. The photos online are far better than the reality, but it is a fun and interest experience. And cool as I descend hundreds of feet into mine shafts. A wooden staircase with 378 steps provides access to the mine’s 210-foot level. A 2-mile tour features corridors, chapels, statues, and underground lakes 443 ft underground. Thankfully a tiny elevator taking a long 30 seconds returns me to the surface. Allow at least three hours for the tour, museum and exiting the shafts in their tiny lift. 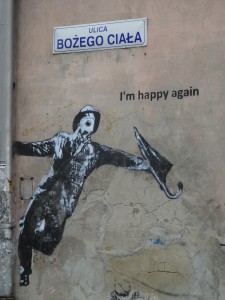 The joys of travel

I catch my Polski bus for the afternoon ride to my next destination, giving me time to reflect on Kraków – the pros and cons. I like the city and encourage visits soon, before the hoards change its atmosphere and attitude. The cons? Certainly I could do without the Irish lads, always drunk and obnoxious. But then, it does remind me of my early European travel in the early 70’s, as do the Mohawk-haired almost talentless guitar players in the streets. The heavy police presence doesn’t seem to dampen the citizen’s ardor for the cheap Polish pint. Graffiti continues to be a common means of expression. None of this is a reason to avoid the wonderful experience of travel in Poland.

Driving thru the countryside, I could be anywhere in the Midwest, except for the unreadable advertising on the barns. Cutting hay in the fields, acres of corn, lots of forests. PolskiBus is comfortable, air conditioned, clean, announces in English, gives mea  seat belt, snacks and free wifi. All for about $6. Faster and nicer than the train. I arrive this afternoon in Wrocław, pronounced totally different than it looks.