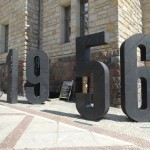 Each city has its history

I’m confused. From the moment I arrived in Poznań I have been direction-challenged. Thankfully, my iPad gets me around. Just 125 miles northeast of Wrocław, Posnań has been a Polish city since the early 1900s and became a cruelly occupied city, first by the Germans, then by the Communists. But the real story of Poznań is the 1956 Uprising.

I like a city with Franklin Roosevelt Street and Woodrow Wilson Park. I feel appreciated. I also need to know why the Poles have come to name places after my presidents. This is a city that can be seen in a couple days. After leaving my nice little room at the Traffic Hostel, I walk the short distance to the Stary Rynek, or Old Market Square, the heart of old town. 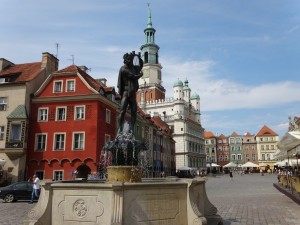 The Rynek is said to be the most beautiful square in Poland. Having just left Wrocław, I might argue this, especially because of the two ugly concrete bunker-like buildings that sit behind the town hall. But it is impossible to deny the square’s beauty and charm. Stately medieval houses ring the perimeter surrounding the town hall and weigh house. The square is filled with museums, fountains, restaurants, musicians, and children chasing huge soap bubbles and playing in the water fountains in order to beat the heat and because that’s what kids do. The clock tower chimes atop the ornate town hall, its spires and historical medallions glittering in the sun.

The Rynek was over 60% destroyed in WW2 and meticulously rebuilt by Poznań’s citizens. The surrounding houses are an eclectic mix of baroque and Dutch renaissance styles. Under the White Eagle has been an operating pharmacy since 1564; a past mayor of the city lived in an 11th century house where he dabbled in astronomy and won world fame by predicting a battle defeat of the Turks; at Rynek 50 a drunk King August II of Saxony fell out the window, the gothic portico breaking his fall and saving his life. Rynek 52 is said to have once housed a werewolf. 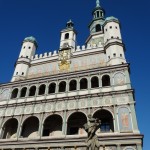 But the major beauty of the square is its Town Hall (Ratusz). First erected in the early 14th century, Poznań’s glorious Hall really blossomed in the mid-1500s when an Italian architect added the renaissance loggia and tower, earning the structure acclaim as ‘the most beautiful building north of the Alps.’ Unfortunately, the older the building the more opportunity for disasters to strike and the town hall was no exception. A 1675 fire, 1725 hurricane, and WWII bomb damage have resulted in much rebuilding of the original structure.

But its white marble facade is a wonderful mix of delicate marble arches, curling designs, peaks, astrology insignia, and medallions of figures from history and mythology. The clock has a beautiful chime but it’s two mechanical billy goats who butted heads each noon since 1551 are housed in the City Historical Museum inside, well worth visiting if not just to see the gorgeous interiors. The museum collection encompasses exhibits from the 10th century up to the present day. The biggest draw is the Great Entrance Hall with its elaborately decorated vault supported by two huge pillars. The tableaux are inspired by the bible, astrology and figures from mythology. Directly outside the Town Hall is the original whipping post, dating from 1535, with a figure of the executioner on top. 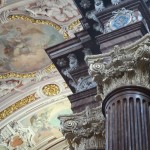 Lesser Basilica of St. Stanislas or Fara Church is a 17th c. complex of church and buildings. The gothic facade is an eye-catching salmon and white, topped with copper domes with a life-sized statue of St. Ignatius of Loyola over the portico. The vault of the nave soars over 90 ft. over a gothic baroque interior of massive artificial red marble columns topped with gold, 7′ statues of the apostles, delicate paintings, angels hanging from every niche and archways dripping with ornamentation like white frosting on a cake. 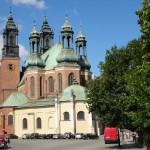 Cathedral of St Peter and St Paul on Cathedral Island

Ostrow Tumski or Cathedral Island is where Poland originated, according to some, like Pope John Paul II. A castle was erected here in the 9th century and over a millennium ago where an early king ushered the country into Catholicism. The island is home to the magnificent Cathedral of St Peter and St Paul. This major church was built in 968 and raised and rebuilt several times adding new architectural styles including baroque, neoclassic, and the brick facade of today. The roofline alone is worth a trip with its mix of towers, peaks, and domes all in a copper patina contrasting beautifully with the deep-red brick facade. Inside there are 12 different chapels, much renaissance art, a gothic alter, lavish baroque pulpit, tombs of early emperors, and lots of bronze monuments. The high alter is a priceless 14 c. polypeptic. Five gothic and renaissance bronze tomb slabs are back on display after having been stolen by the Nazis. The huge 52-pipe organ and stained glass at the rear of the church completes the rubbernecking efforts to admire detail.

Behind the cathedral is the red steel Jordan Bridge spanning the Sibena River. It is another lover’s padlock bridge. This tradition began recently as a result of a 1992 Italian story telling of lovers who sealed their bond by attaching a padlock to a bridge over the Tiber in Rome and throwing the key into the river. The book inspired ‘Love Bridges’ all over the world. It’s a charming tradition, but a weighty challenge for these old bridges. 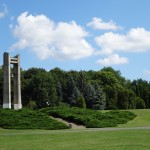 Bell of Peace and Friendship in Citadel Park

Citidel Park is a green space and acres of forest just north of old town. It has been a fortification since 1793. In 1828 the massive polygonal brick Fort Winiary was built by the Prussians. But it was never used much as a fort, more as a military prison. In fact, the fort was outdated by WWI and in 1918 captured by Polish insurgents and became home to their military units in the relatively quiet interwar years. However, in 1939 Nazis occupied the fort and turned it into a POW camp for Polish, Russian and British soldiers. The citadel entered its most violent period of history when it became the final Nazi stronghold during the 1945 Battle of Poznań.

The Battle of Poznań was a massive assault by the Soviet Red Army with its objective to eliminate the Nazi garrison in Poznań. The defeat of the German garrison required almost a month of bombing fortified positions, intense urban combat, and a final assault on the city’s citadel by the Red Army, complete with medieval touches.

Certain cities which lay on the path of the Soviet advance, like Poznań, were declared by Hitler to be strongholds (Wrocław was another), and garrisons were ordered to mount last-ditch stands. Hitler hoped these cities could hold out behind Soviet lines and interfere with the movement of supplies. Poznań was defended by 40,000 German troops facing the experienced and angry 8th Guards Army – the victors of Stalingrad.

To make a gruesome story short, the Red Army encircled the city. In bitter combat that saw the outlying defenses reduced and city blocks seized, the Soviets succeeded in pushing the German defenders towards the city center and the citadel. By the beginning of February 1945, most of the city had been captured, and by 12 February, the Germans held only the citadel.

The final Soviet assault on the citadel started on 18 February. Before the Red Army troops lay a deep moat matched by a steep rampart. In an echo of medieval warfare, Soviet forces used ladders to cross obstacles, but found themselves swept by fire from the citadel’s redoubts. These redoubts took the better part of three days to neutralize; one silenced by flamethrowers and explosives, the other’s line of fire blocked by debris thrown in front of the firing ports by exasperated Soviet troops.

Having built an assault bridge, Red Army tanks and assault guns crossed into the main grounds of the citadel on 22 February. At this time, German troops had permission to attempt escape, but it was too late. That evening, the remaining 12,000 German forces surrendered. The battle left over half (90% in the city center) of Poznań severely damaged by artillery fire and infantry combat. 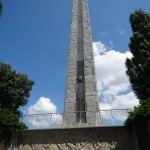 Monument to the Heros of the Poznań Citadel

Today, the Poznań Citadel site with remains of some fortifications (much was dismantled and bricks used to rebuild the city); a Monument to the Heros of the Poznań Citadel, a massive obelisk atop the grand staircase that can only be Russian-inspired architecture and dedicated to the Russian soldiers who died in the 1945 siege; and two excellent military museums. Three quiet military cemeteries are dedicated to Poles, Russians, and British soldiers. All too many tombstone dates reflect the bloody final day of battle on 22 Feb 1945. 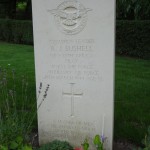 Marker for Roger Bushell, leader of “The Great Escape”

In the British cemetery lie many airmen shot down during bombing maneuvers over Poland, including Squadron Leader Bushell and his men, made famous in the movie “The Great Escape.” All shot by the Gestapo on 29 March 1944. 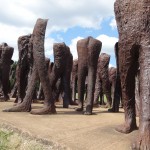 Rose gardens, ponds, paths and sunbathers mix among the monuments. A striking addition is “Unrecognized,” 112 headless and nameless 6′ cast iron men marching across the meadow. 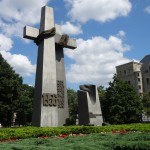 Monuments to Victims of 1956

“We demand bread!” In Poznań, the most honored site is the Monuments to Victims of 1956. The monument is two steel 65′ ft crosses bound together at the top. It is a matter of intense pride that the 1956 Poznań Uprising was the first of several massive protests of the Polish people against the dictatorial government of the People’s Republic of Poland. Protests were not motivated by anti-communist ideology; the workers’ demands were mostly of an economic nature, centering around better work conditions. The workers sang “The Internationale” and their banners read “We demand bread.”

A crowd of approximately 100,000 gathered around the Imperial Castle or Zamek. About 400 tanks and 10,000 soldiers of the People’s Army of Poland and the Internal Security Corps under a Polish-Soviet general were ordered to suppress the demonstration and during the pacification fired at the protesting civilians. The death toll was placed between 57 and 100 people, including 13-year-old Romek Strzałkowski waving a polish flag. Of course, citizens with flags were no match for a two-hour long procession of tanks, armored cars, field guns, and troops that surrounded the city. Nonetheless, many consider the 1956 Uprising to be an important milestone and one of the events that precipitated the fall of communism in Poland. A museum commemorating the Uprising is below the Imperial Castle or Zamek and well worth a visit.

Another must-see museum is the National Museum which houses a fascinating collection of Polish and international art, including a beautiful Claude Monet. It is huge museum with modern Polish art in the new wing and the old wing filled with impressive displays of Flemish, Italian, Spanish and Dutch art. 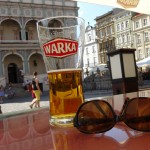 Why the presidential streets and parks? Much of Poland is thankful for US support both in the Interwar period and after WW2. They often joke that they, Poles, should be America’s 51st state. Actually, the Allies were slow and meager in their early defense of Poland. Their bombing of German strongholds destroyed cities and factories. But America did support Poland’s reemergence as a democratic nation and its efforts to rebuild. I should hear more English on the street than I do as more Americans need to visit their handiwork and the genealogical roots of many of its citizens.

I am back on an IC train, this time with five Polish women and a dog. Three hours of multiple-participation chatter – all the way to Gdańsk. The dog is smart and lays in the outside corridor. I am destined for the Baltic, speeding through the flat fields and forests of Poland, hopefully to cooler weather.